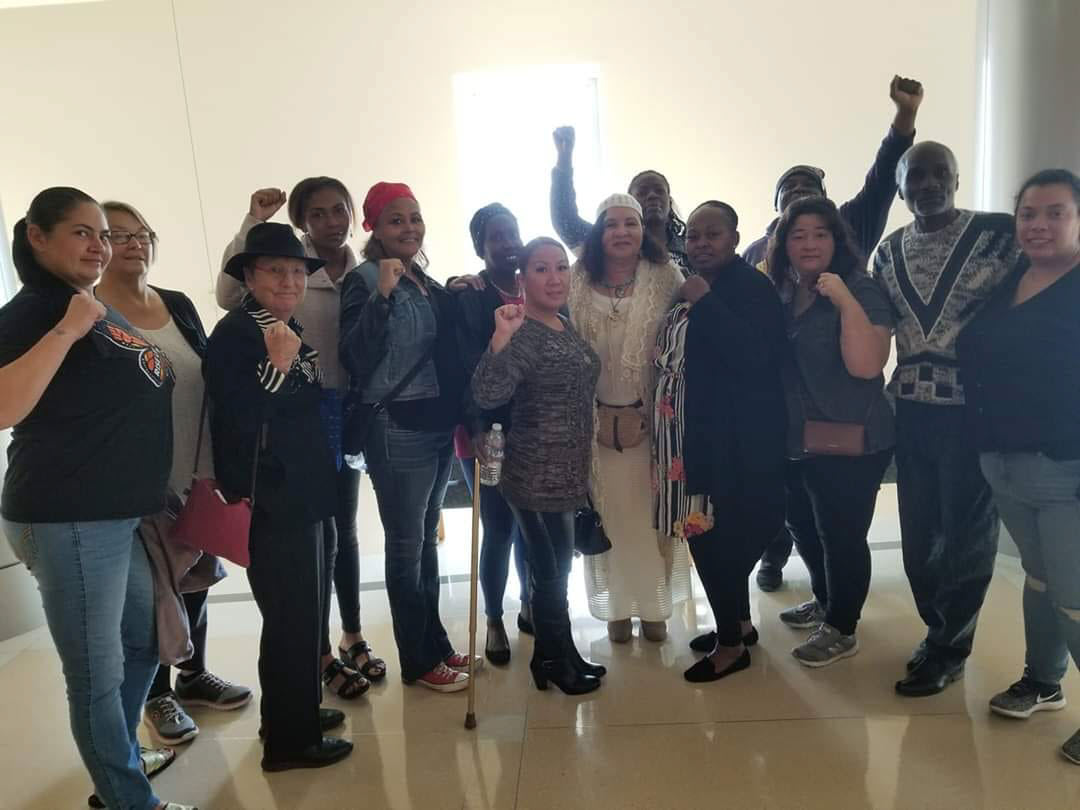 SACRAMENTO – The long, long journey for Dionne Smith-Downs since her 16 year-old son James Rivera Jr. was shot and killed by Stockton police officers nearly 10 years ago came to some closure Friday morning here in U.S. District Court when the City of Stockton agreed to a $395,000 settlement to Smith-Downs and James Rivera Sr., parents of the teen.

The case had been scheduled for a new trial in January, after a mistrial was called by U.S. District Court Judge Carolyn Delaney in mid-November after a weeklong trial. The eight-person jury reported it was hopelessly deadlocked after only a few hours of deliberation.

Former SPD officers Greg Dunn – whose SPD employment was terminated – and former officer Eric Azarvand, who’s now working for another police department, were on trial for using excessive force when they chased down and killed Rivera Jr. on July 22, 2010. The trial was delayed because of Stockton’s bankruptcy.

Well-known civil rights attorney John Burris, in his closing arguments at the trial, said the officers panicked, and lost their “wits” when they gunned down the

Friday, Burris said it was a difficult case for the family, and for his legal team.

“It was a most difficult, challenging case. We gave it our best shot. We accept the outcome, and the settlement brings some closure to the family because this is finally over, although with great sadness for the family,” Burris said.

Smith-Downs and River Sr. could not be reached for comment Friday.

After the hung jury, Burris said “We believed we presented a sufficient enough case so the jury would rule on at least one officer, if not both.” His legal team was relentless in portraying officers who had killed Rivera as reckless.

Many witnesses, including bystanders, neighbors and – to some degree – even defense witnesses, agreed.

Burris said that the family was “upset at not getting a verdict,” and that it had been an “emotional” roller coaster for them to relive the death of Rivera Jr. after more than nine years looking for justice. “It was very emotional and now they have a big empty feeling,” explained Burris.

Rivera would have turned 17 the day after he was killed when police caught up with him driving a stolen van. Police pursued him, rammed the van and fired 29 rounds into a building where the van was wedged. No weapon was found, and Rivera never emerged from the van, until officers removed his body, riddled with nine rounds.

Burris said he didn’t know if the jury was hung in favor or opposed to the plaintiffs or defendants, and that while the judge could have given the “Allen instruction,” which encourages the jury to go back and work for a verdict, she did not.

The trial centered around whether officers were in real danger, and reasonably in fear for their lives.

Dunn insisted he was in danger. Some other officers and bystanders disagreed. Dunn, and co-defendant Azarvand said they thought Rivera had a weapon, but the teenager was not armed.

Witnesses, including at least one police officer, said they didn’t see the van, wedged in the garage area of the triplex, appreciably move toward Dunn, and wasn’t a threat to Dunn, who was terminated from the Stockton police force for what SPD claims are unrelated reasons.

Burris focused on Dunn as the instigator of the shooting and death of Rivera.

“You can’t create conflict. You can’t place yourself in danger and then shoot your way out. It wasn’t ramming. The van was rocking. That’s not the basis to shoot. (And) shooting blindly 13 times (Dunn emptied his clip) into a space that he couldn’t see into…isn’t there some responsibility?” asked Burris of the jury.

“You can’t shoot because you panic and are afraid. You can’t execute someone,” added Burris, who criticized Dunn for not giving lawful verbal notice to Rivera that he would use force if Rivera – who may have been unconscious or injured from crashed into the residence – didn’t respond.

There was no standoff, Burris reminded the jury. Dunn hit Rivera’s stolen van twice, it crashed into the garage area of the triplex and about 15 seconds later Rivera died after a rain of bullets.

“No one said they would shoot. They only said to get out. There was no warning of force. Within seconds (of the warning) you heard shots…it shocks the conscience. Dunn might have been fearful but it’s not what a reasonable officer would have done,” said Burris.

“They chose to not take some time. They chose instead to take a boy’s life. James was surrounded and outnumbered. There was time to move back, he had time to move,” said Burris, laying the blame more on Dunn than any other officer.

“Officers shot because of what Dunn did, and only because he said he was trapped…that’s the basis for them to all shoot and kill,” charged Burris.

“If 29 shots doesn’t shock your conscience (a legal requirement for the plaintiffs win), nothing will. With proper warnings, (James) may have surrendered, but other officers responded to Dunn’s fear. Dunn panicked. He lost his wits. Firing of 29 shots is excessive force. Period,” Burris closed.

Plaintiff and defendant police practices experts disagreed with each other – one expert emphatically maintained Stockton police officers made a “tactical error” by shooting and killing Rivera, but another applauded the officers’ actions.

Another plaintiff attorney from Burris’ Oakland law office, Ben Nisenbaum, in his closing argument, used the words of the defense team’s own witnesses to show “this is evidence of a bad shoot. One shot was too much. This was unreasonable.”

Nisenbaum seized on the words of Craig Fries, founder of Precision Simulation, a forensic firm in Grass Valley, and a defense witness who provided a dramatic, animated reconstruction of the physical evidence at the scene – for the most part based on statements of Dunn and Azarvand, not eyewitnesses.

“There is no evidence of significant (van) movement. Mr. Fries said zero to 15 inches, not five feet. Not enough to take a life or the use of lethal force,” he said, knowing that police usually need to claim and show they feared for their life to make the use of force legal.

For Dunn and Azarvand, that meant the threat of the van backing up and injuring them.

“But,” said Nisenbaum, “bumping is not ramming,” explaining to the jury that “rocking” is not moving and that the “suspect is not going to put it in reverse…because it was stuck in the garage.”

He used the testimony of another defense witness, Ronald Miller, a SWAT team instructor and the Plaintiff’s police procedures expert Roger Clark to show “this was a panic shooting. (Dunn) lost self-control.”

“Miller and Clark agreed that if the van only moved slightly it was not enough to use lethal force. It should not have happened. The intervention was successful. The van was stopped. No shots were required. Each shot here more gratuitous,” he said.

“Officer Dunn said he was concerned (about the van hitting him). He shouldn’t shoot somebody for that. He never had to shoot the boy at all. He should be in jail. They knew he was 16,” added Nisenbaum.

His arguments hit upon the same theme over and over again. That there was no need to shoot, the van was pinned in the residence, there were alternatives to killing Rivera other than shooting and Rivera was not a threat.

“You can’t take a life on that basis,” said Nisenbaum, who said that the shooting officers were “not on a clock…they knew (other) officers were coming. They had time to deliberate. They did not. They were deliberately indifferent. It was malicious.”

Bruce Kilday told the jury that even for the defense, “this is has been a challenging case. A lawsuit can’t bring their (Dionne Smith-Downs and James Rivera Sr.) son back. No one is happy about the outcome.”

He went on to list the “undisputed facts,” including that Rivera escaped from jail, reportedly burglarized a home, and participated in an armed car checking the day before.

He discounted the testimony of local residents, even the two neighbors who lived in the same triplex as the one that took the direct hit from the van when Dunn rear-ended it.

“Their central claim that the shooting was not reasonable, that the van was immobilized, the suspect trapped and that called for tactical repositioning is contrary to physical evidence,” he said, repeating that defense mantra that the van moved forward and backward and was a threat to the life of Dunn, who was caught in a “v” between his car, his car door and another car bumped to the left by the van when it plowed into the building.

Kilday argued that no one can now use “20/20 hindsight,” and stated that the two defendants believed what was “objectively reasonable at that time,” including that they felt the “driver was not contained” and that to believe otherwise would be “foolhardy” by the defendants on the scene.