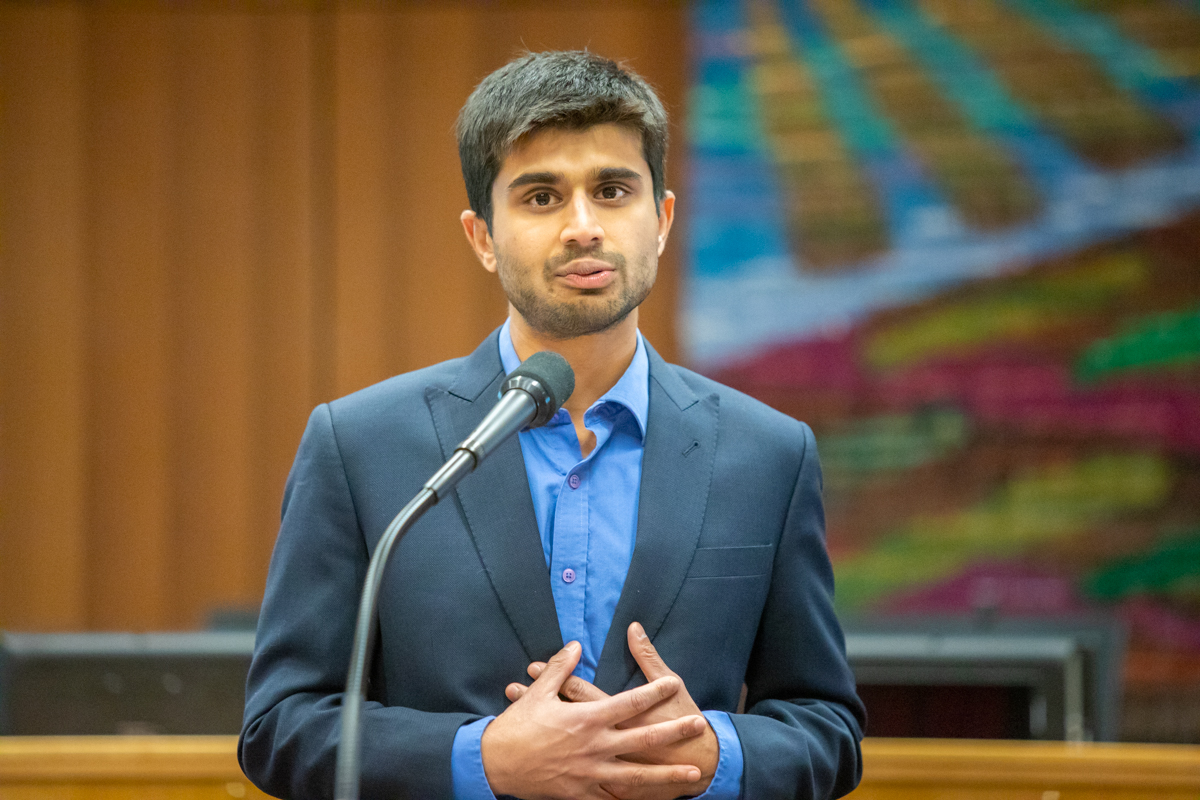 Mr. Naimpally explained that they summarized the existing evidence and looked as to where the next steps for further research and policy advocacy.

“One overarching theme is there isn’t a lot of rigorous evidence on homelessness programs,” he said.

He noted that many people believe that you need to put a lot of money into the problem, but there are a lot of people who are at risk of homelessness due to a one-time financial shock like a medical shock, or any type of financial shock for someone living on the margin could be enough to push someone over.

What they found then was even a small, and limited financial assistance “can really be beneficial.”

While there is not a lot of research, one study that Mr. Naimpally cited, found that “individuals with severe mental illness with access to these services were five times less likely to experience homelessness 18 months after hospital discharge.”

“That’s a pretty large impact,” he said.   But he noted that a comprehensive bundle of resources “does have the potential to be expensive.”  However, he also noted, “there are a lot of costs avoided at the same time.”

He noted the huge imbalance between the legal resources that landlords can mobilize and those of tenants.

Some of the things they found is basic legal assistance can increase court appearances by 32 percent (not showing up in court often seals the deal in terms of eviction and other disfavorable court outcomes), decrease decisions unfavorable to the tenant by 58 percent, and reduce eviction warrants by 77 percent.

He said, “there is some basic evidence that providing legal assistance can be helpful in preventing homelessness.”

Another area is the direct provision of housing such as supportive housing, transitional housing, rapid rehousing.

“This was a paradigm shift that happened a couple of decades ago,” he said.  “Rather than require people to get clean or get sober before being provided direct housing, getting people into housing is the first step.  No conditions applied.”

On the other hand, “Transitional housing typically requires people to meet some criteria in order to come in.”  It is also time-limited, typically not for more than six months.

He cited a study where they compared people who received transitional housing versus permanent supportive housing and other forms of housing.

“They found that transitional housing was no better than the status quo,” he stated.  “It was rather expensive and the preconditions didn’t actually do anything.”

“So putting the preconditions doesn’t seem to do much in terms of the outcomes you care about,” he said.

“All of these cases found that it dramatically improves housing stability,” he said for those who received permanent supportive housing.  They found that in two years time, they were less than half as likely to be entering shelters or experiencing housing instability.

“It’s a very cost-effective program,” he said because of the cost-avoided “vastly dwarfs any direct cost of intervention.”

This helped shift the paradigm,” he said.  Part of the reason that HUD moved towards the Housing First model is “because of evidence in evaluations like this.”  He said, “They found that permanent supportive housing works.”

Mr. Naimpally said it was an open question as to how to best target it since not everyone needs permanent supportive housing.

Rohit Naimpally said there wasn’t much evidence to support the idea that people move to a location due to the services.

“Most people in a given place experiencing homelessness are from there,” he said.  These aren’t people who moved because of weather or services.  “These are typically people who at some point had stable housing and no longer have stable housing.”

The other model he discussed is rapid re-housing.

He referred to this as permanent supportive housing “lite” with no-preconditions, some supportive services but for a shorter time period.

He said there is limited evidence on this and they are evaluating it in Sacramento County.

Mr. Naimpally said that in comparing options, “they found that housing-choice vouchers were the most cost-effective for stabilizing people’s housing outcomes.”  He added that one reason they didn’t find a lot of success or impact of rapid rehousing was “there weren’t a lot of people who took it up.”

“You can offer this to people, but you can force people to take this,” he said.  He said they can’t say it works, but can’t say it doesn’t work.

He also said that they don’t know much around market-level interventions.

“We have very little evidence of what changing zoning ordinances can do,” he said.  Another that they don’t know much about is rent control.

He said that they need to learn more about a lot of these programs.  For instance, how existing programs impacts outcomes beyond housing stability – for instance, the interaction with the criminal justice system.

What bund of services is most effective and for whom.

“The really big question is about these market level interventions – if we can increase the supply of housing through changing zoning ordinances or incentivizing affordable housing more – literally building more housing, what does that do?” he asked.  “These are all open questions.”

Share:
Tags:HomelessnessHousing First
Previous : Constitutionality and What Reckless Indifference Are Issues in a Key 1437 Case
Next : Breaking News: Two Dead After Murder and Police Shooting in Davis

4 thoughts on “Presentation Discusses Ways to Prevent and Reduce Homelessness”