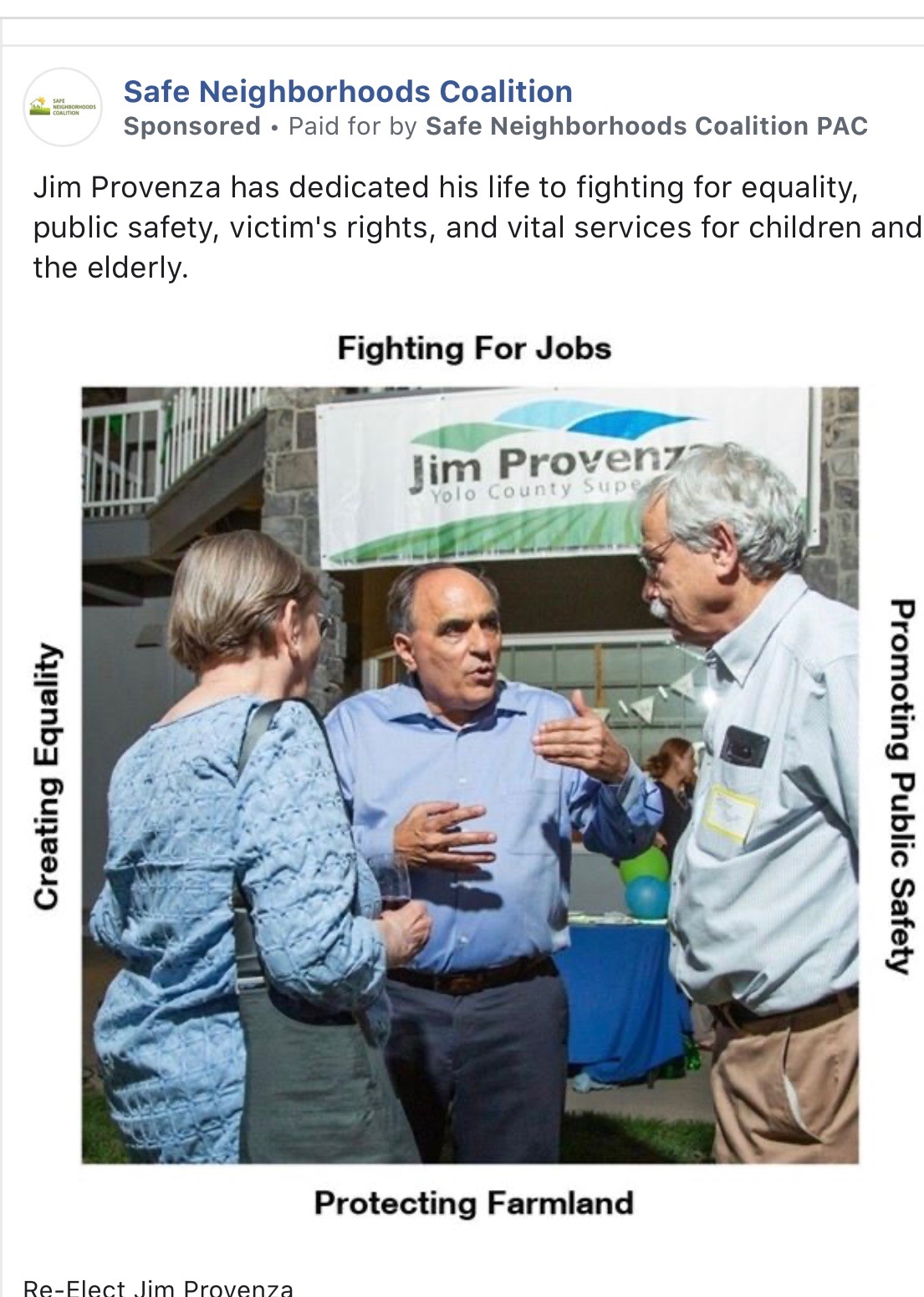 A political action committee, the Safe Neighborhoods Coalition, has apparently entered the supervisors race, pushing advertising for Jim Provenza in support of his re-election campaign.  The group appears linked to a Yolo County Deputy DA and has put forward ads primarily on Facebook—though they have yet to file an independent expenditure report, so it is difficult to know how much they have spent.

Among the issues they appear to champion is opposition to Prop. 47, which was passed by the voters and has reduced crimes like simple drug possession and petty theft to misdemeanors.

In reaching the three-term supervisor, Jim Provenza, by email, the Vanguard learned he had been unaware of the effort on his behalf and has not taken a public position on Prop. 47.

According to the group’s mission statement: “Safe Neighborhoods Coalition is an organization made up of community members, business owners and civic leaders who care about the safety, prosperity, and future of the places we live, work and raise our families. We believe that our neighborhoods should be places where we can be free from the worry and negative impacts of crime. We believe local policies should look to improve the quality of life for residents by making public safety a top priority. We believe that when there is a focus on these principles, our communities thrive and grow.” 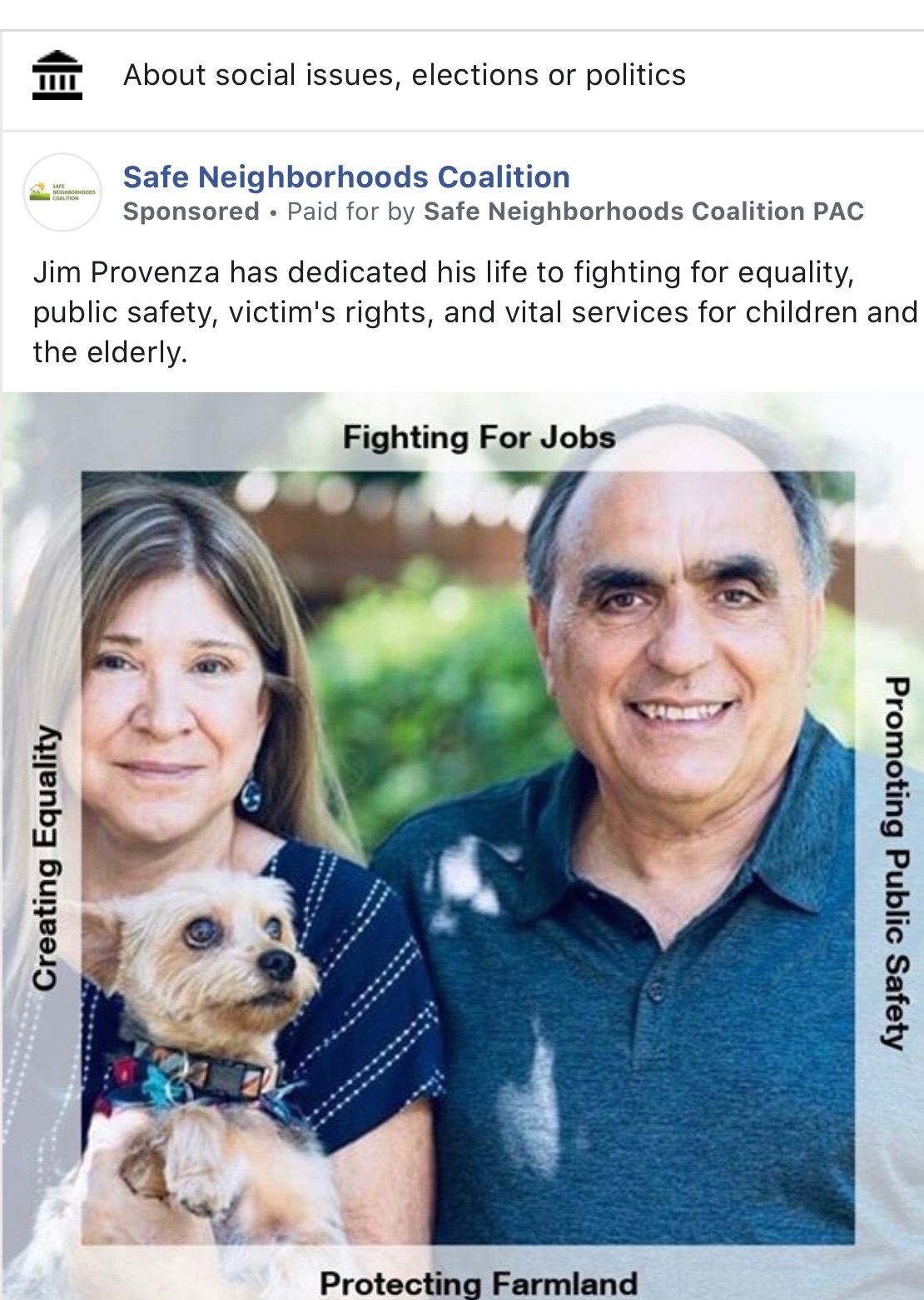 They claim to advance their mission in two ways:

“By supporting local elected leaders who share our concerns and advocate for approaches that keep us safe.

“By supporting policies, programs and organizations that enhance public safety.”

Independent expenditures must be reported if they exceed $1000.

By one count, “There have been at least ten separate ads. No idea how much they cost.”

To date, none of these contributions have been reported. Looking on the Secretary of State site, there are none reported as well—although the PAC is registered with an FPPC number of 1422258.

The PAC is headed by Matthew DeMoura, who also happens to be a Yolo County Deputy DA.

On their Facebook page there are quite a few posts that have been made in opposition to Prop. 47 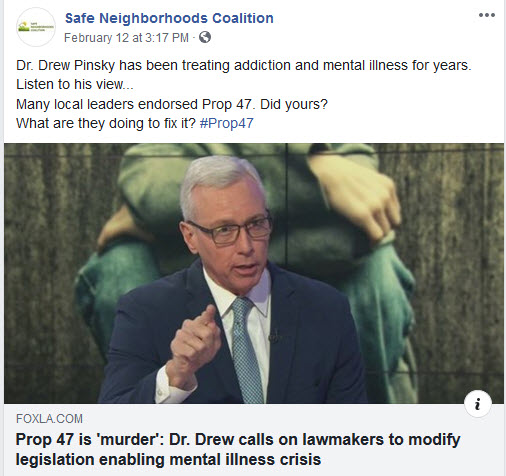 A written caption by the administrator of the Facebook page, as the graphic shows, reads: “Dr. Drew Pinsky has been treating addiction and mental illness for years. Listen to his view… Many local leaders endorsed Prop 47. Did yours? What are they doing to fix it? #Prop47“

The article is entitled: “Prop 47 is murder.”

10 thoughts on “Anti-Reform Group Does IE in Supervisors Race”