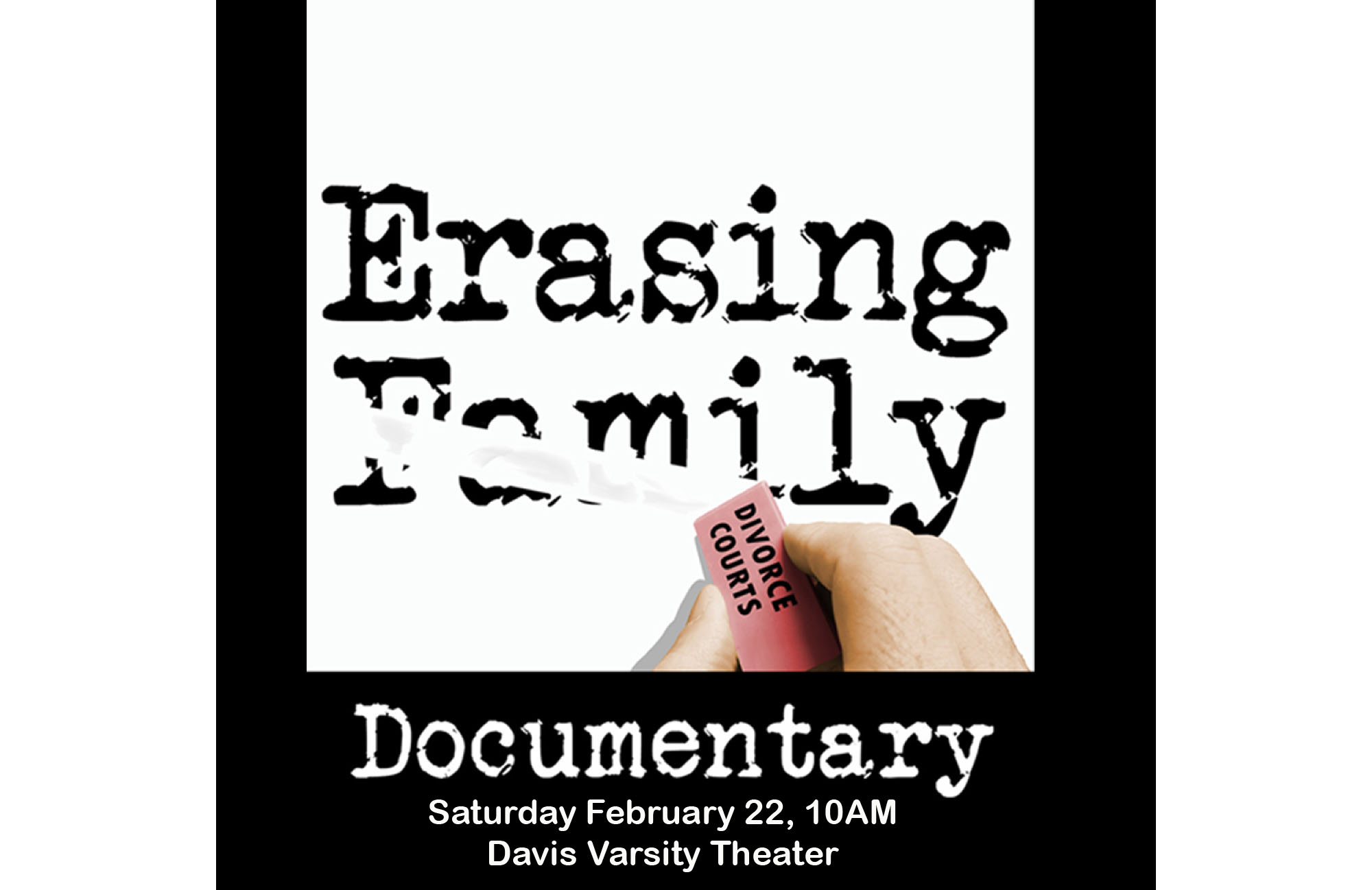 On Saturday at 10 am, at the Davis Varsity Theater, there will be a private showing of “Erasing Family,” a new documentary film that focuses on an often ignored issue of parental alienation.

The Vanguard spoke with the filmmaker, Ginger Gentile, about the film and the issue.  She explained that this film is a follow up to a film she did in Argentina, called “Erasing Dad.”  Moving back to the US, she put a post on Facebook and was contacted by a large number of people—including, perhaps surprisingly, mothers who were unable to see their kids.

In addition, “a lot of kids contacted me who were really traumatized by what they were put through in family court,” she said.

Ms. Gentile explained, “Erasing family means negating or denying that a family bond exists.  This is very different from disliking a parent or having a problem with a parent or being angry at a parent.”  Instead, she said, “It’s being taught to replace a parent with another person.

“This is the largest public health crisis of our time,” she said.  “The family court is very ineffective at identifying these behaviors and treating them.”

In her view, “Family courts are designed to escalate conflict.  They’re adversarial.  And to assign blame.  What these families need is help and a path to move forward.”

Ms. Gentile believes that kids “need both parents in their lives, even if one parent needs help or isn’t the best parent.  No parent’s perfect.”

She believes that family courts look to assign blame rather than figure out what “both parents need to be, to be effective parents.”

Given how widespread the problem is, why is it that more people are not aware of the problem of parental alienation?

For Ginger Gentile, she said, “Because it’s taboo, you want to kill a dinner party conversation, talk about divorce.

“If I try to say I work on trauma caused by high conflict divorce… people don’t talk about this,” she said with a bit of a laugh.  “I think it’s because it’s very easy to talk about trauma in foreign countries—it’s very easy to say that genital mutilation is bad, genocide is bad, starvation is bad, we can all agree on this.  But if you say now let’s look at how we handle our own families… and people get very nervous.”

Ginger Gentile says that she herself was a child in a high-conflict divorce, but she said that while her own story was very traumatic, it was nothing compared to the stories of those in the documentary.

One story that they covered in the film—and they filmed it in Sacramento—is about a young woman named Candace.  Her father is Iranian, her mother is an American who is Christian, her parents divorced and her mother convinced Candace that her father wanted to kidnap her and take her to Iran.

For many years, the mother would call up his work and tell the employers that he was an Iranian terrorist, which would get him fired.

While Candace feared her father, her own mother was abusive toward her.

“She didn’t want to see her father,” said Ginger Gentile explaining the amount of fear that Candace had.  At the same time, “She didn’t want to ask for help because she didn’t know if what the mother was saying about the father was true or not.”

It wasn’t until she was an adult that she re-united with her father.

In the long term, Ms. Gentile said, “You are traumatizing children and families for no good reason.  This is all 100 percent preventable.”

Moreover, “they are much more likely to replicate this as adults.”  Furthermore, many are afraid to enter relationships at all.  They say, “Why would I expose myself to trauma, again?”

Ginger Gentile believes this is all preventable.

“If we can get these cases out of family court, if we see families experiencing these crises get help, we can prevent this,” she said.  “It’s a hard problem to fix, but it’s an easy problem to prevent.”

Her solution, then, “is not having family court.”

The problem with family court is that it’s adversarial and it seeks to assign blame.

“A family court… is not effective when you have the breakdown of a family unit that needs to be healed,” she said.  “We should move these into collaborative law practices where the two lawyers work together to find the best outcome for their clients.”

She also recommends, “Joint custody—shared parenting—as the default.  You would need a reason why one is unfit rather than two parents arguing over who gets more parenting time.”

A big part of her solution is aggressive mediation.

She views a situation that results in irreconcilable differences as “a failure of the mediator.”

Part of the problem, she says: “You can never have a constructive adversarial process in family.”  But she did acknowledge, “Some families will need a lot of help.”

She said they can have a legal process but it shouldn’t be an adversarial one before a judge with 2000 cases on his docket, heavily relying on experts who charge a lot of money but also don’t resolve the conflict.

Instead, she said, “You need very highly skilled professionals to help these families.”

Michelle  Jordan will be the moderator for the screening in Davis on Saturday.  She is director for the Impact Campaign for the documentary.

“It’s a very emotional documentary,” she said.  “A lot of the children that have experienced this—even when they’re in their forties or fifties, they aren’t aware of it.”

When they see the film, she said, “they have a trauma response.”

She said that “until a lot of the health professionals see the film and understand what’s happening in the courtroom, it’s really not the safest option to release it immediately.” They will have professionals to assist people with the trauma of the discovery and helping them work through their reunification with their family.

“We want to make it super safe for people to re-unite with their family—without having to lose a relationship with either parent.” 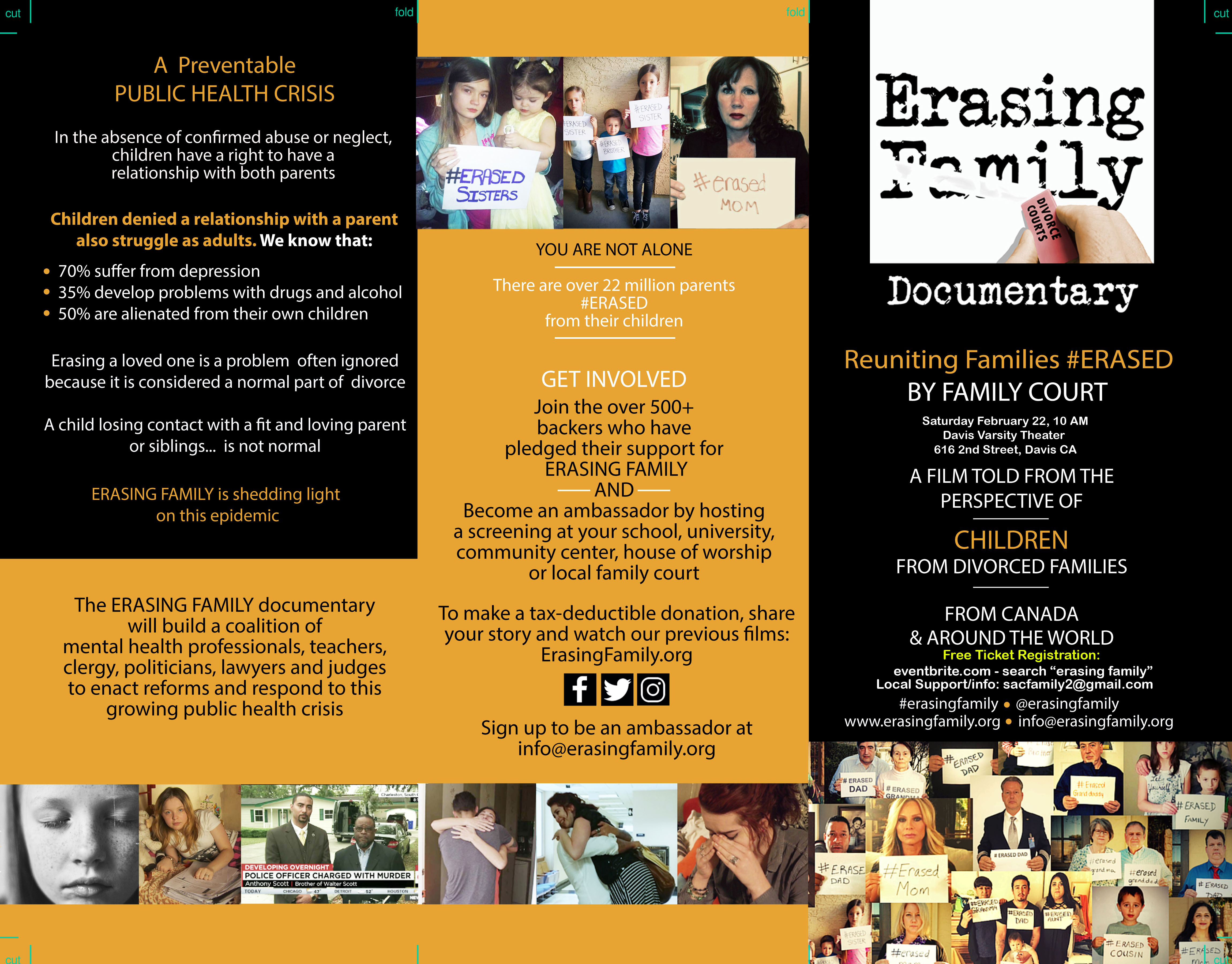 Share:
Tags:DivorceFamily CourtParental Alienation
Previous : Guest Commentary: Only We Can Win a #UC4All
Next : Tulsa County DA, Staunch Opponent of Criminal Justice Reform, Hit with Bar Complaint for Allowing Unlicensed Interns to Prosecute in Over 150 Cases