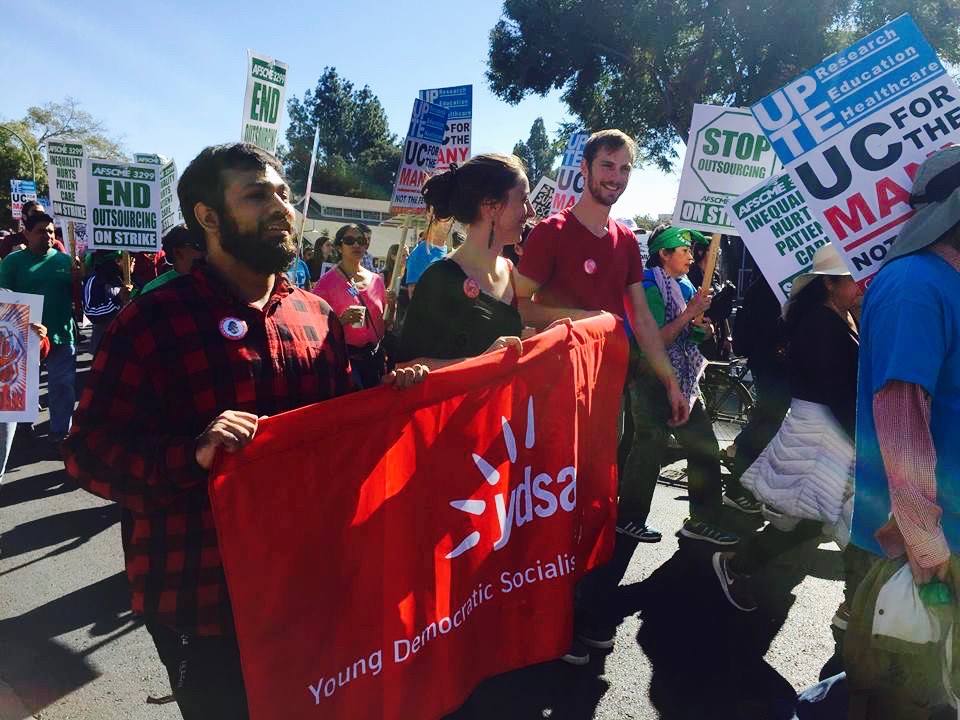 With the March 3rd Democratic primaries quickly approaching, thousands of students across UC Davis will be voting in their first presidential race. As a teaching assistant and student organizer, I have had the privilege of working closely with this new generation of voters, whose endless curiosity and biting humor have me feeling sappy and entertained on a weekly basis. It is this close contact with students and community members here that makes me wake up every day and keep up the good fight. Davis, with its climate rallies and good-hearted residents, has shown me time and time again that the world deserves better than the Trumps and Bloombergs of the world, and that together, we can win a true #UC4All.

When I first moved to the US in 2017, many of my Canadian peers expressed patriotic amazement – why would I ever move to Trumpland? All I could possibly be met with was apathy and bigotry.
How wrong they were! Since moving to the US, I have met countless activists, from Sunrise Movement to United Students Against Sweatshops to my own organization, the Young Democratic Socialists of America (YDSA), whose passion and hope for another world, a world for the many, not the few, warms the heart of many foreign graduate students.

And it will take passion and hope to win the world we need. We have a decade left to save our planet from ecological catastrophe. We need unity among not only the US working class, but the international, multi-racial working class if we want to successfully push for policies that will inevitably pit us against the fossil fuel industry, the military-industrial complex, and powerful multinational corporations. And yet, the news of murders of Black trans women, ICE raids in communities of color, anti-Semitic attacks, and police brutality, not to mention the looming threat of a war with Iran and the utter moral corruptness of the Democratic Party, is often enough to send many leftists spiraling in despair. But we cannot afford despair, least of all marginalized communities who will be the most negatively affected by environmental disaster, failed economic policies, and jingoistic foreign policy.

But it will also take more than passion and hope to win. And it will take more than just showing up to rallies and the ballot box, and it will take more than therapy dogs. If we want a UC that is truly for all, free for everyone regardless of citizenship status, a UC where every student and worker has affordable and beautiful housing, a UC where our families do not depend on our jobs for expensive healthcare plans, a UC where students’ and workers’ families do not feel the burden of student debt and medical debt, then we need a strategy to win. We need to organize, and we need to

do so with intention.

These past couple of weeks have seen a surge in student organizations canvassing Davis, meeting their neighbors and classmates as they learn crucial skills in one-on-one organizing conversations. These students have heard Bernie Sanders’ call for democratic socialism – for a Green New Deal, for free College for All and the cancellation of all student debt, for beautiful public housing and federal rent control, for Medicare for All, for strong unions – and are spreading the word, learning about their communities and encouraging others to engage in shared struggle.

What does it mean to organize with intention? It means prioritizing working class communities of color, and in Davis, the most efficient way of doing so is by speaking with students on campus, who disproportionately belong to the multiracial working class and who are inheriting the disaster that decades of neoliberal policies have created. It means hearing the struggles of a classmate, sharing one’s own struggles, and convincing people that we can win when we come together.

But it also means being honest about the limitations of a socialist presidency. Though Bernie could cancel all student debt by executive order and most of us would feel safer if a racist, imperialist trigger-happy man were not so close to the levers of war, many of Bernie’s policies will have to go through Congress, which will likely be unfriendly to us. This is why organizations like YDSA , as well as labor unions, are crucial to winning life-changing policies like College for All. Socialist organizations like YDSA will be there once Bernie is elected, pressuring our elected officials, our university administrators, and our bosses as we take rank-and-file jobs and help build the labor movement so that we can win, and win big.

When I was an undergraduate student in Quebec, I witnessed my whole world turn upside-down. Hundreds of thousands of people took to the streets, banging on pots and pans every night as they demanded an end to austerity. 75% of my province’s postsecondary students were on strike for months. But when we won and stopped the tuition hike, a lot of that momentum went dormant.

We don’t have the luxury of allowing the incredible momentum that Bernie Sanders, the recent teachers strike-wave, and the (re)-nascent climate justice movement have inspired go dormant. So let’s organize – let’s go up to people that may not look like us, let’s talk with them about their lives and raise their expectations. Let’s talk about what a world with secure and good jobs, housing, healthcare, and education would look like. Let’s invite strangers into our organizations and work with them to develop our skills and politics, guiding each other as we organize our schools, our workplaces, our churches, our apartment complexes. We have the world to win!