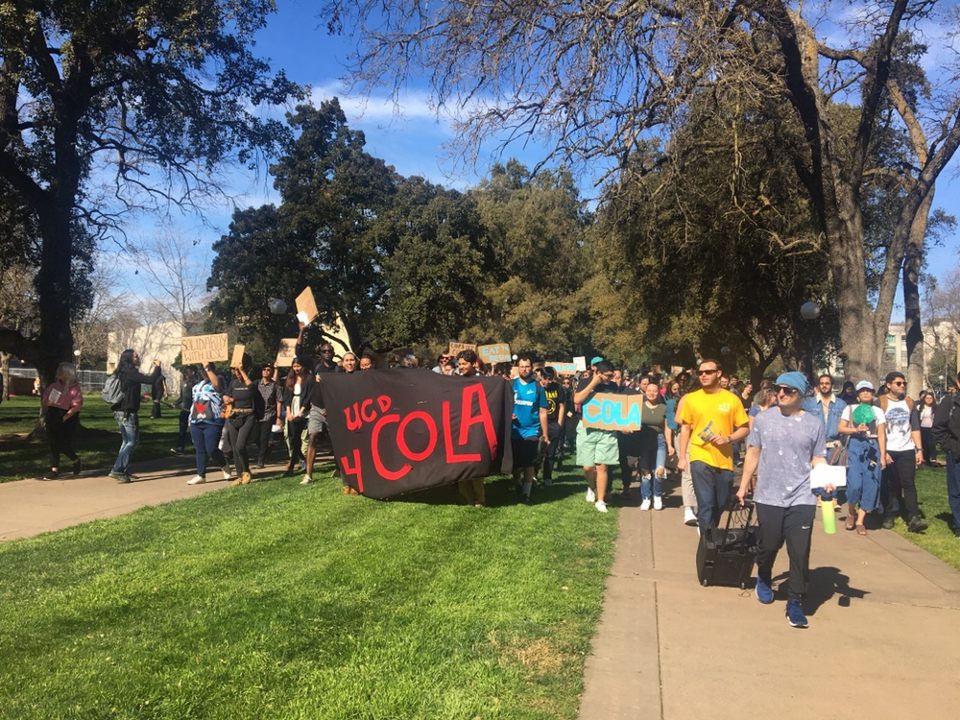 DAVIS, Ca – Over 400 UC Davis students marched this Friday in solidarity with over 200 UC Santa Cruz students who will be fired from protesting for the Cost of Living Adjustment (COLA) by withholding grades. They ended the event with confronting Regents in the Student Community Center.

UCSC students began organizing for the COLA, an adjustment that would support the living costs in UC, in September 2019 and made their first demands to the administration on Nov. 7, 2019. On Dec. 9, 2019, a group of UCSC graduate students began a wildcat strike, or a strike unauthorized by UC Student-Workers Union (UAW Local 2865), where they refused to submit 12,000 undergraduate grades due by Dec. 18, 2019, and would continue to do so until the university supplemented their TA salaries with $1,412 a month. The strike appears to be indefinite, with participating graduate students refusing to hold office hours and withholding fall quarter grades and upcoming winter quarter grades.

President of the University of California system Janet Napolitano announced that striking graduate students had until Feb. 21, 2020, to deliver the grades or be fired. This would result in the deportation of international graduate students participating in the strike. Some universities have also responded to protests by increasing police presence on campuses.

The UCD4COLA march is considered part of the “Doomsday Strikes,” a series of demonstrations across the University of California campuses to show solidarity with UCSC and support for the installation of COLA. The march started in Memorial Union and then marched to Mrak Hall, the university’s administrative building.

During the UCD4COLA march, the following demands were established: 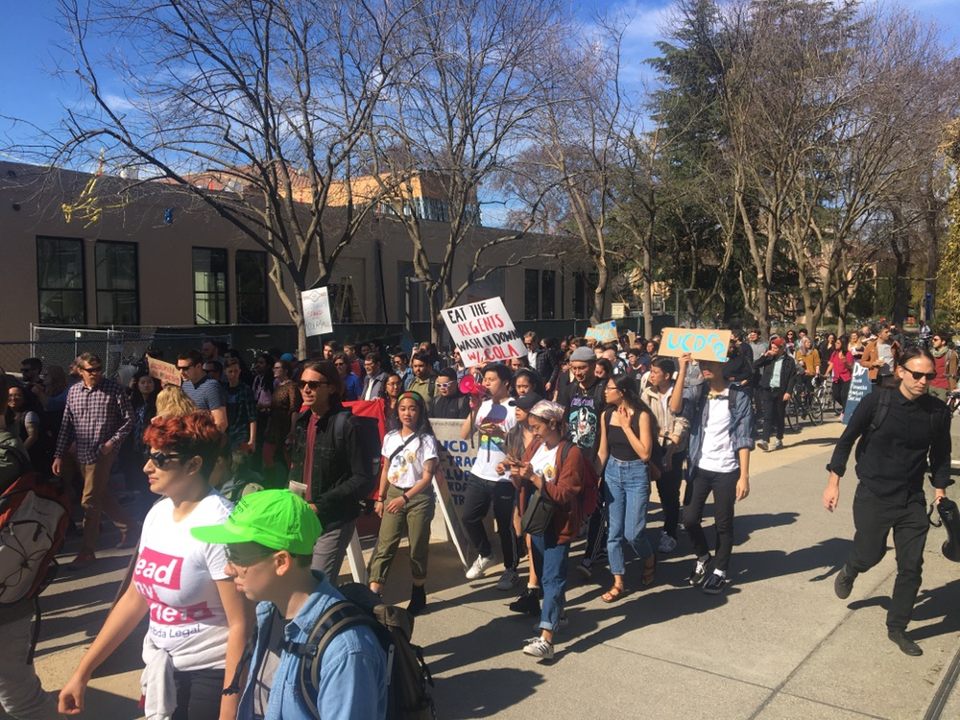 At the Memorial Union, reportedly over 400 students were present as they began to chant various phrases, including, “My neck, my back, the UC is whack” and “Cops off campus – COLA in our bank accounts.” A few introductory words were also said, noting how students are “sick and tired of being sick and tired” and that the universities had “no right to terrorize its graduate students and no right to punish its workers.”

They also noted in UC Irvine, an alumnus who had no part in the protests got “terrorized” by the police and is still in jail today. They demanded the demilitarization of campus.

In UC Santa Barbara, graduate students had taken over their administration building on Thursday night and had still been there.

UCD4COLA noted UC Davis’s history of social justice activities, especially in regard to a history of demanding ethnic studies.

Mga Kapatid stated they stood in solidarity with UCSC and the other UCs supporting COLA, as “we are being exploited as students and a community.” They affirmed, “No level of activism is too small.”

Anakbayan also came up, speaking about the necessity of having a relevant and proper education for students that represented them, including communities of color. A new chant was also shared: “Magibakaa, wag matakot” which translates from the Philippines language of Tagalog to “To struggle, don’t be scared.”

A member from the Bulosan Center also spoke, stating that the graduate students lacked the funds to support their cost of living. This lack of support especially impacts students coming from communities of low economic backgrounds, such as students of color. COLA was considered a movement of the people and the member called for the “rebuilding of the [ivory] tower so we can all benefit

Another organizer came up, stating he had read a study where the UC system was considered a Ponzi scheme where undergraduates came in and later became graduate students that would do a majority of minimum-wage work for professors, such as grading, while professors worked on researching and gaining prestige. Students, he noted, were undervalued, underestimated, and already standing up for their rights.

Another graduate student from UCSC called in and stated that 230 people are being threatened to be fired due to their strike but they are ready to stand together to make sure UCSC has its needs met. She noted the energy of the UCSC campus and the solidarity of the UC campuses helped.

In reporting the outcome of the UCD4COLA march, they reported over 400 students walked with them to Mrak Hall and over 60% of individuals that voted on their next steps poll (before it was shut down) agreed to support the strike. 300 people who took the poll would agree to hold back grades and 800 people expressed general support of the strike.

A general assembly happened with the groups split up between graduate students and undergraduate students where the remaining marchers agreed to deliver the demands. Reportedly, UC Regents were present at the Student Community Center in the center of campus.

Marchers went to the Student Community Center and began to chant at the UC Regents. 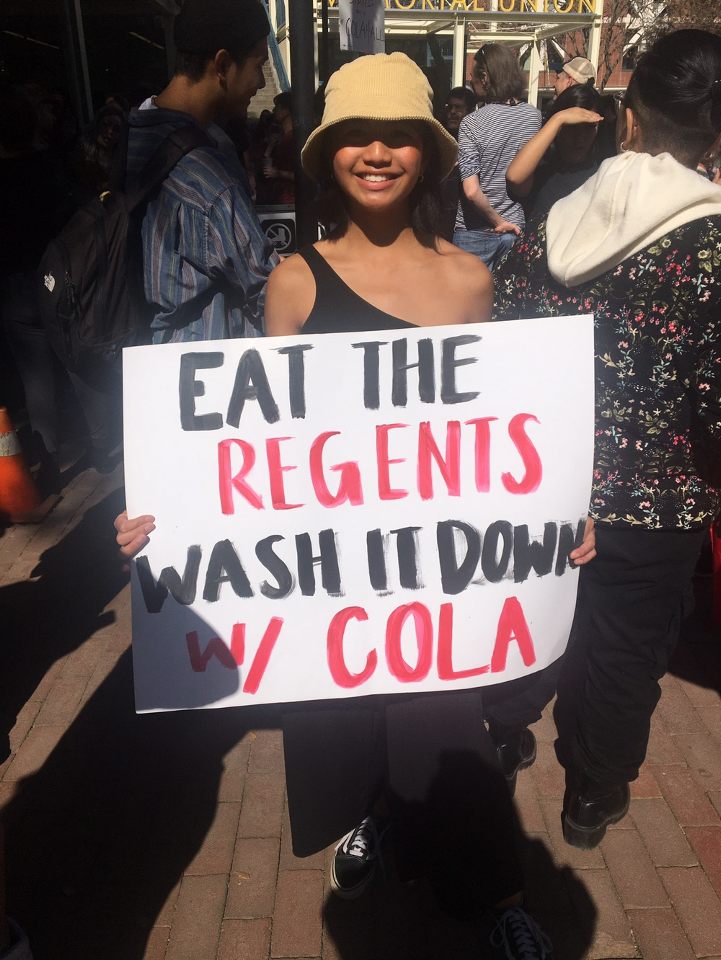 “Eat the Regents,” the group chanted. Another call and response chant included, “Who’s university? Our university!”

As the UC Regents moved from the AB 540 and Undocumented Student Center and into the Student Outreach and Retention Center, the group moved in front of the Student Outreach and Retention Center and continued to calling for the Regents to come to meet them, with one regent coming out and shaking his head while mouthing “no” before heading back inside.

After several minutes of chants, the UC Regents requested 5 individuals come in to speak with them but the group responded it was all of them or none of them. One marcher exclaimed that the Regents did not know what COLA was. The group instead requested that they decide a time and place to meet the Regents.

During the continued chants for the Regents to come out, a California Aggie reporter stated the Basic Fees and Needs Referendum had passed.

“After the last $8 increase in 2030, the fee will be indexed to inflation. The fee increase will ensure the survival of many student-run organizations, events and jobs. ASUCD will continue as a unique, autonomous student government for generations to come,” the California Aggie reported.

They continued to chant for some time before dispersing for a further updates later on.

The following videos of the UCD4COLA march to Mrak Hall below are courtesy of Les Light.