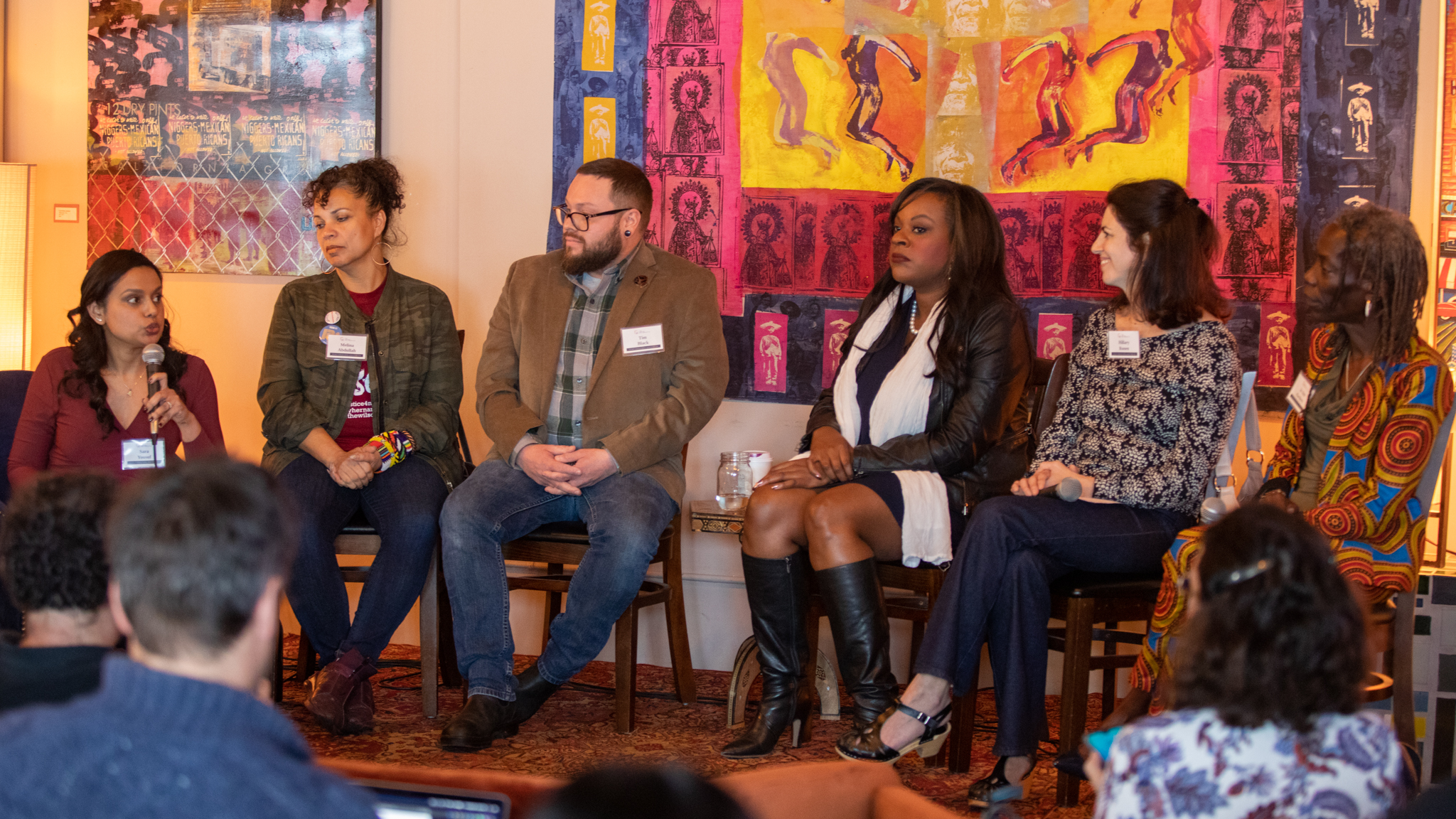 A few days after the discussion, Ms. Adbullah was in the news as one of the protesters that Jackie Lacey’s husband pointed his gun at during a protest outside the LA DA’s home.

The first question was, how did we get to a point where a police response was the way to address mental health issues? 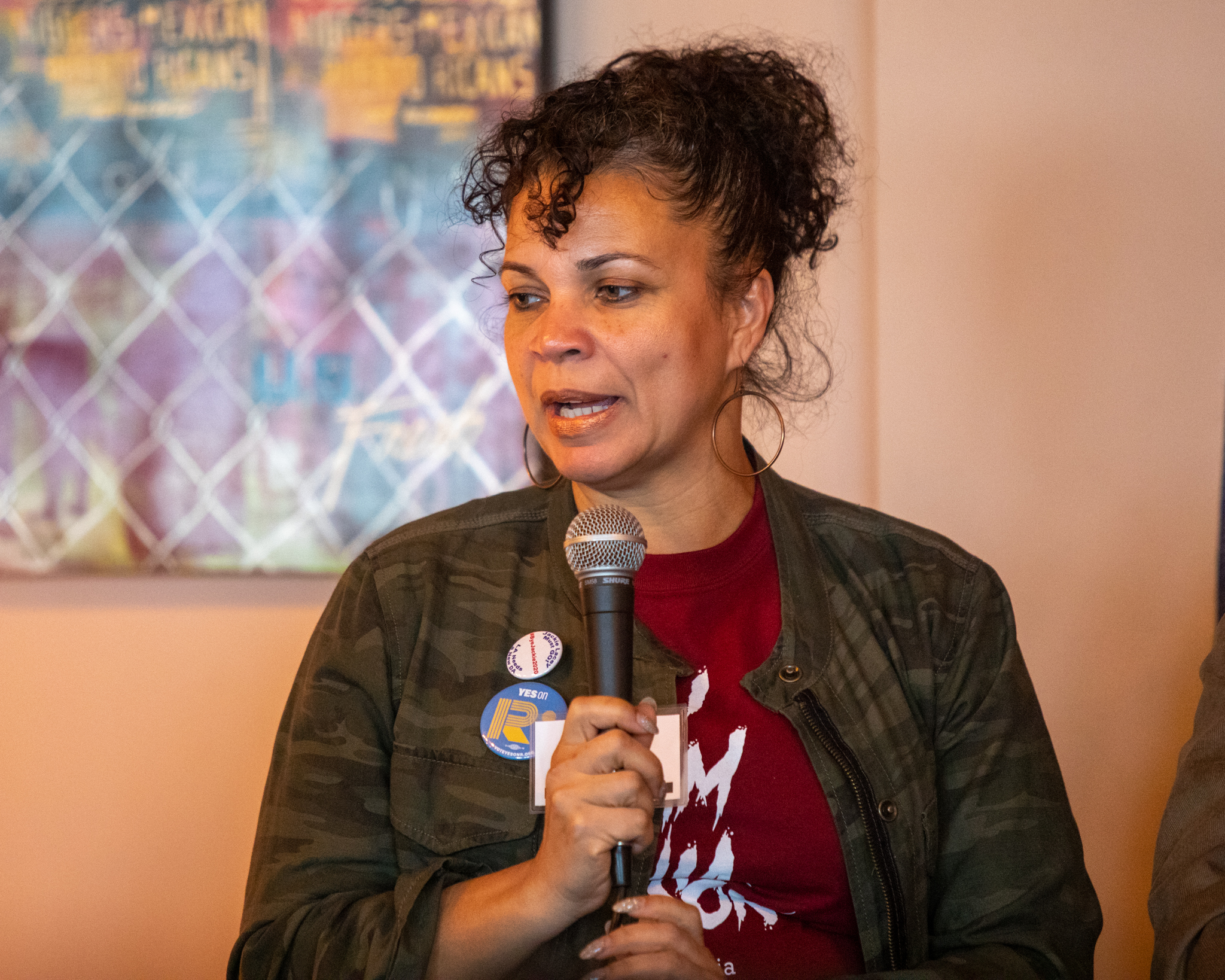 Melina Abdullah responded, “It’s important that we understand that it’s not accidental.  That prisons were intentionally designed and built to produce these outcomes.”

She said police aren’t trained to deal with children, and “we have to get police out of schools.”

Ms. Abdullah said, “Our cities have decided to invest in our police because police secure the capitalist, racist state that we live in.”

She noted, “For those who are not black, it is your duty to dismantle the system that suppresses us.  We win when we push back against the system that has invested in the police, invested in the prisons, has continued to invest in the theft of our labor at the cost of real education, at the cost of real community.  We will win as long as we fight.” 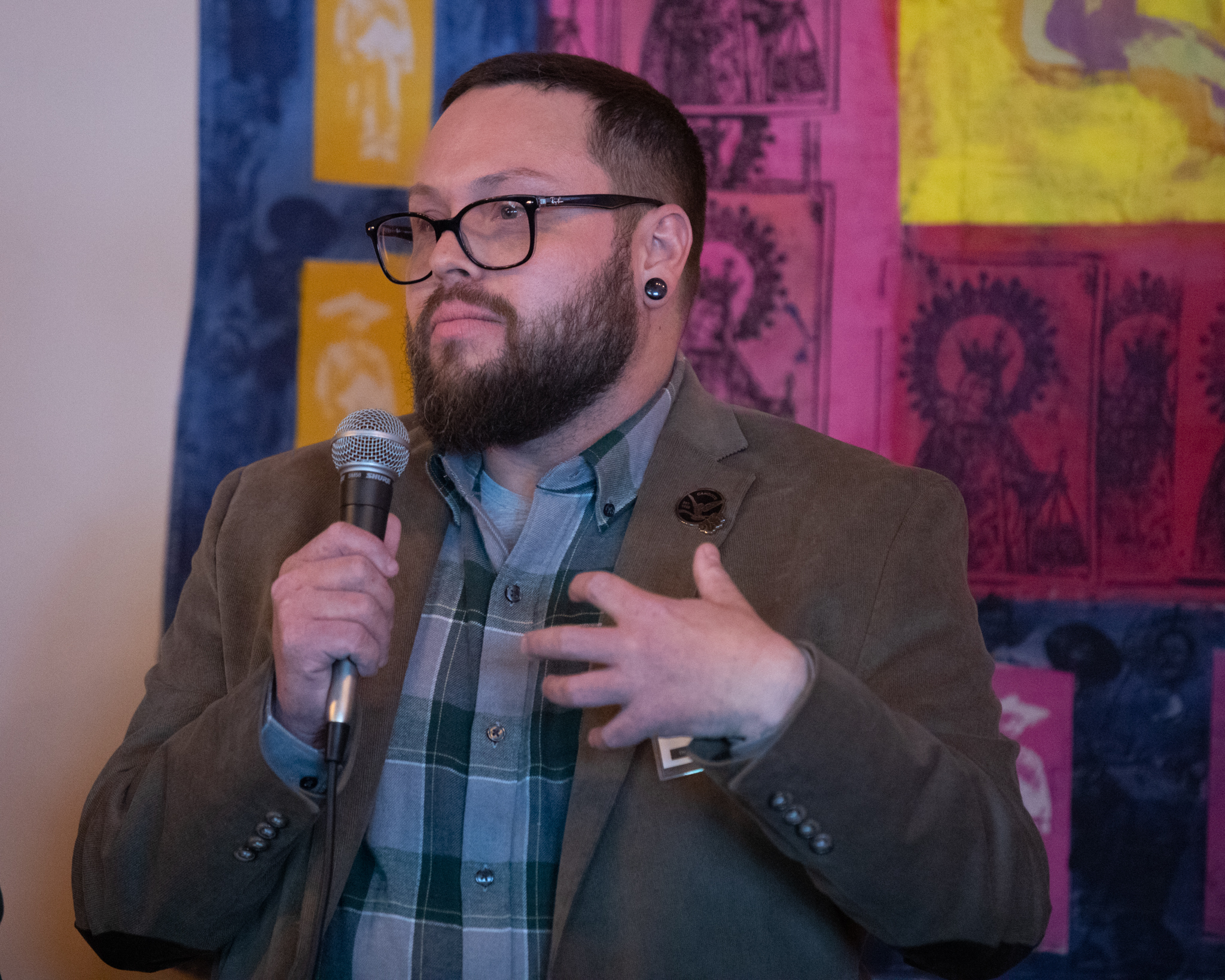 Tim Black said we got to this place because were all taught at an early age to call the cops when something looks wrong.   “We’re told that there’s this authority that can come and make things better,” he said. 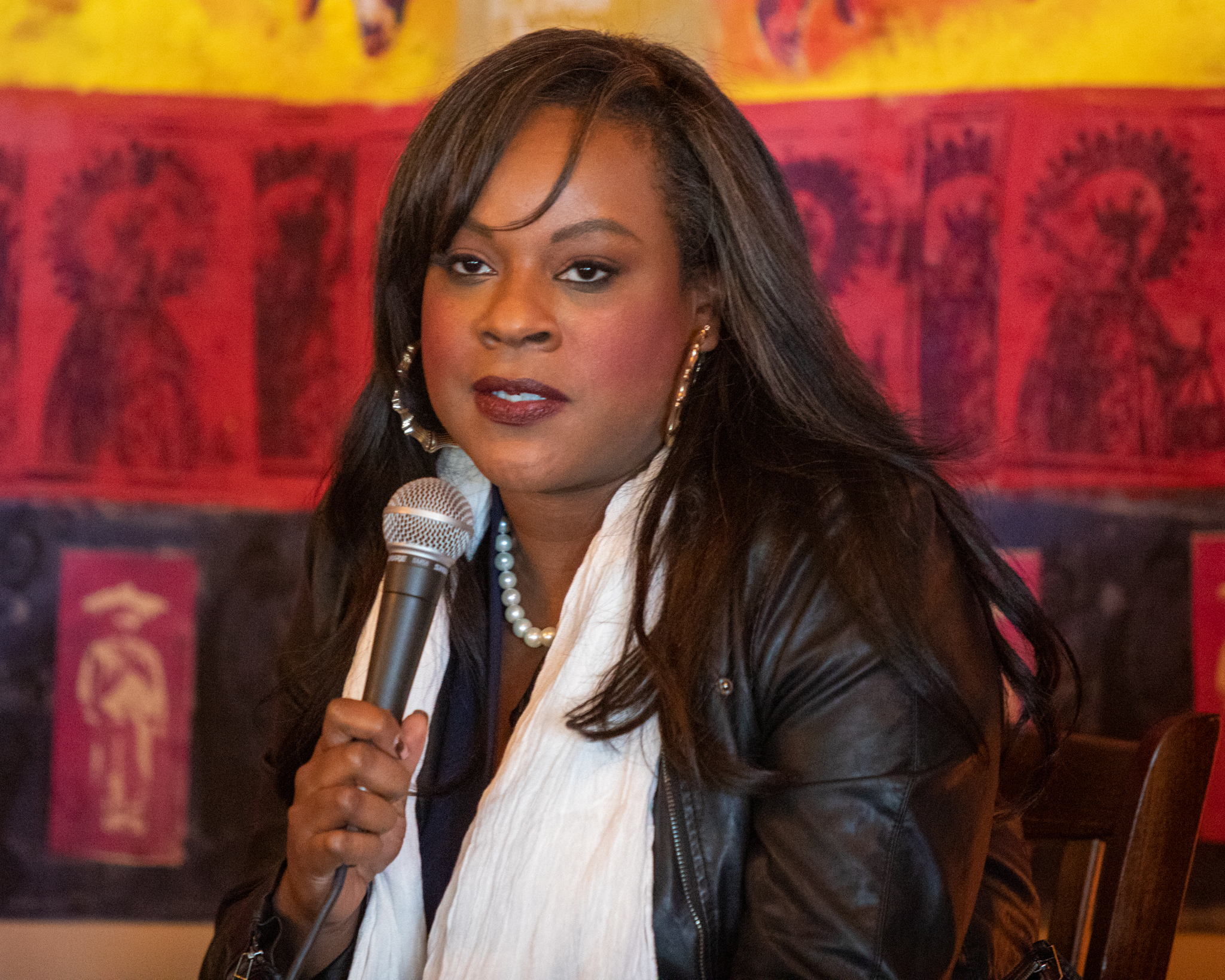 Colorado State Representative Leslie Herod, the first black LGBT elected in Colorado, noted that Democrats had to be tough on crime, “We weren’t going to win your election if you ran on criminal justice reform.”

She said she was not going to run that way, she was going to “run on criminal justice reform and I was going to win.”  She won with the highest vote count in Colorado history, which encouraged her colleagues to take up the issue.

In terms of how we got here, “I don’t think there was a single budget that didn’t have more money for law enforcement in the state of Colorado, every single year.”  How we got here is that “DAs have lots of power in our state houses.  Law enforcement has a huge lobby.  You think big pharma is a big deal—try running a policing bill.” 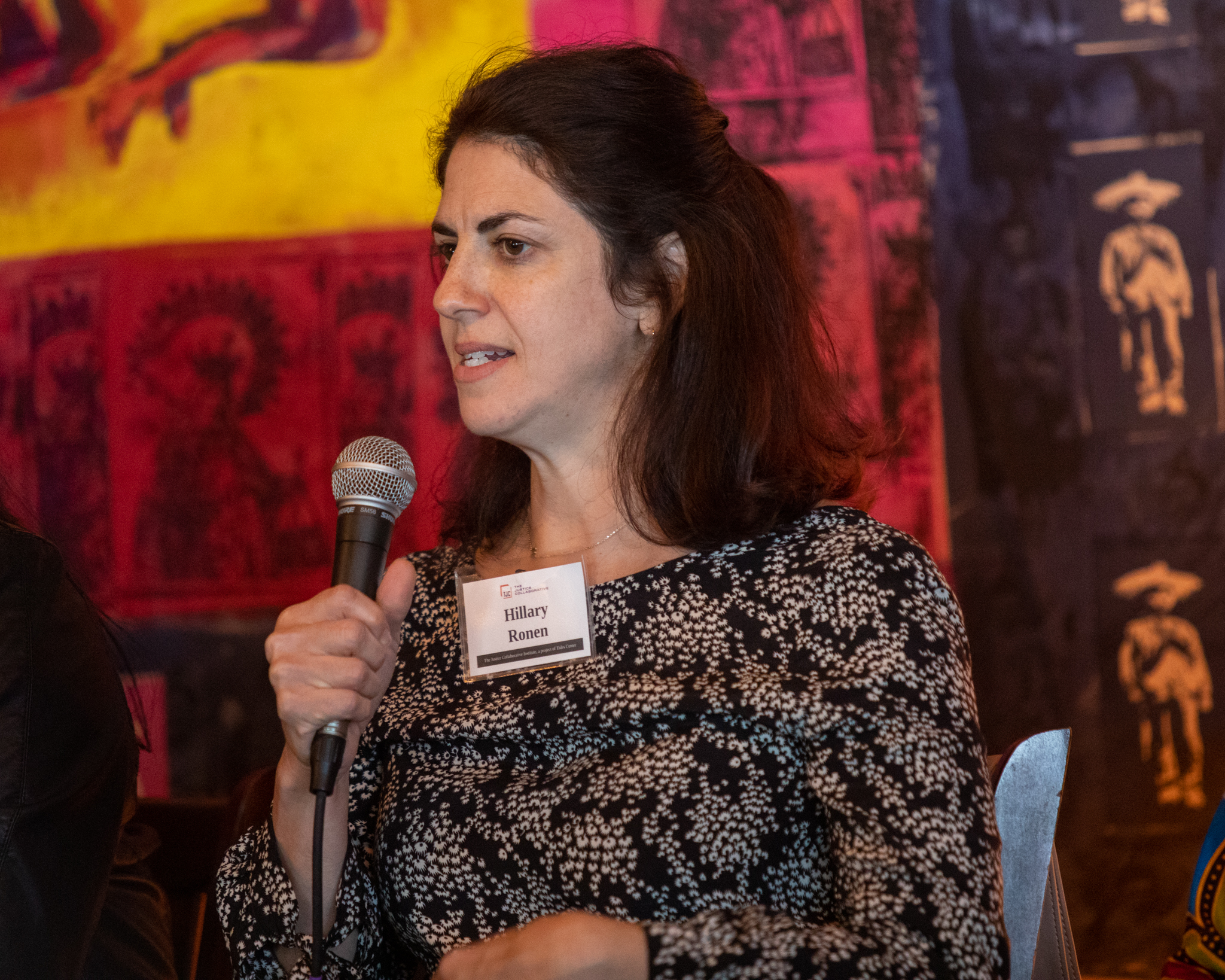 San Francisco Supervisor Hillary Rosen said, “In this country, we have not treated diseases of the mind—drug addiction and mental illness—the same way that we have treated diseases of the body.”  She said, “You never call the police on somebody who has a tumor or cancer—but drug addiction and mental illness, they’re health issues, they’re not criminal justice issues.”

She said, “This has led to police and jails being the main response to mental illness and drug addiction.” Portland City Commissioner Jo Ann Hardesty said, “We have not changed our first responder system since 1885.”  Then we went from volunteer to professionals.

She said, “We have a basic rule, if someone called for help, they didn’t die.”

They were asked for a better way.

Ms. Hardesty said in Portland they are enacting a street response.  She recently checked out the program, CAHOOTs, where “the premise is on low acuity calls, calls where there’s no weapon…  is there a better first responder to send to the scene?  We decided yes there is.”

As a pilot they are sending two-people teams in a van—one is a firefighter/EMT and the other a mental health professional. 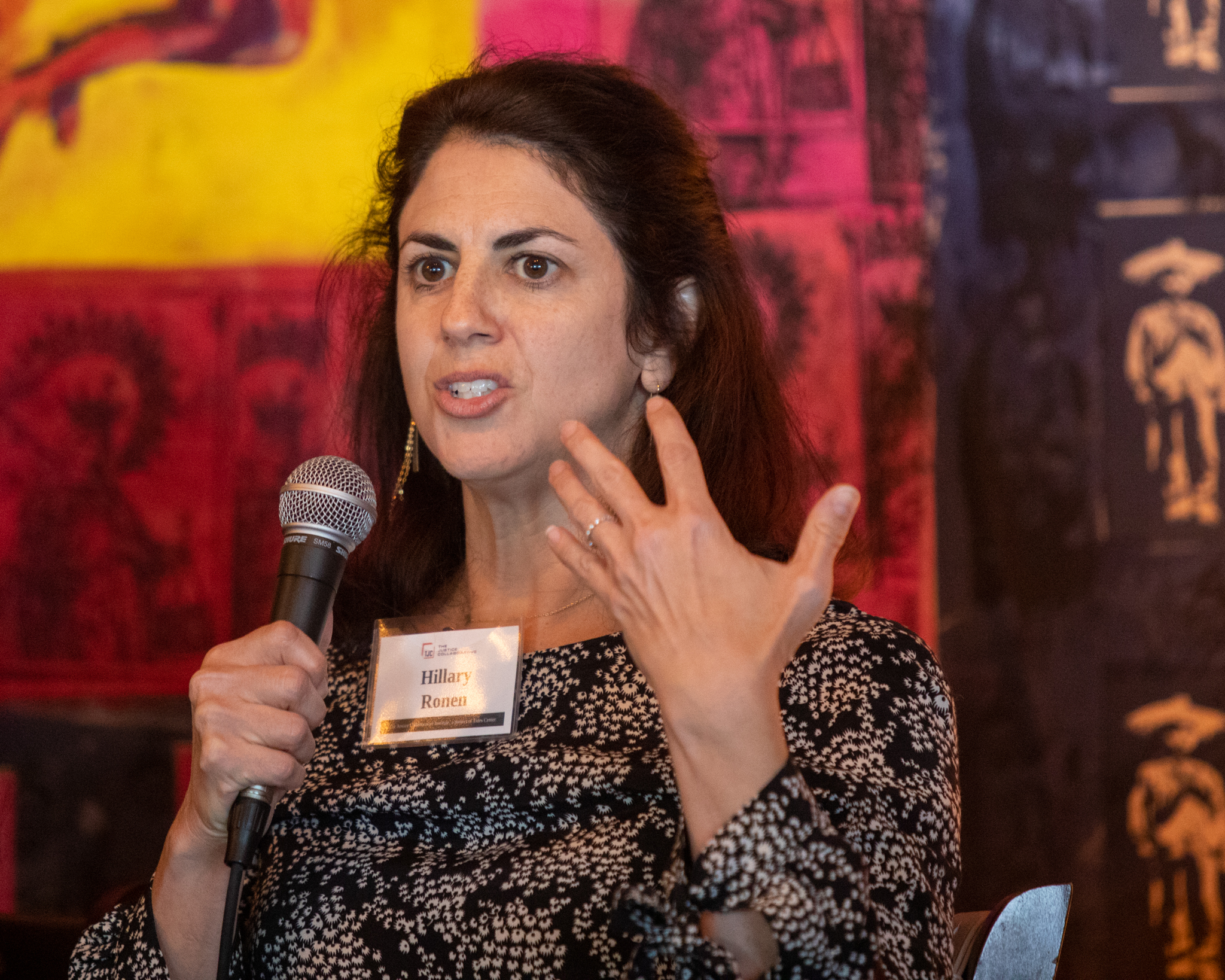 Supervisor Rosen said they enacted Mental Health SF, but haven’t funded it.  “Our system is completely broken in San Francisco,” she said.  “Let’s not have money be an object.”  They sat down over many meetings and asked “what would be the system that we would create to truly help people?”

In the current system, she said, 40 percent of the people taken on a 5150 hold “are discharged without a referral or any follow up whatsoever.”

Eighty-five percent of the people in jail have a history of drug addition, mental illness, or both, she said.

The first step, she said, is “we need a 24-hour health care facility which doesn’t have to be 5150 to take them to, but is available with mental health professionals whenever someone needs it.”

She also said they need “a street crisis team that’s available 24 hours a day, that includes mental health professionals that go out instead of the police.

“All of this requires an expansion of services,” she said.

Supervisor Rosen said they spend $370 million in San Francisco on mental health, but all they are doing is cycling most people through the system.

“When they come out of the program, if they don’t have housing, the vast majority are ending up right back on the streets,” she added. “It’s impossible to stay healthy on the streets.  You’re constantly in survival mode.” 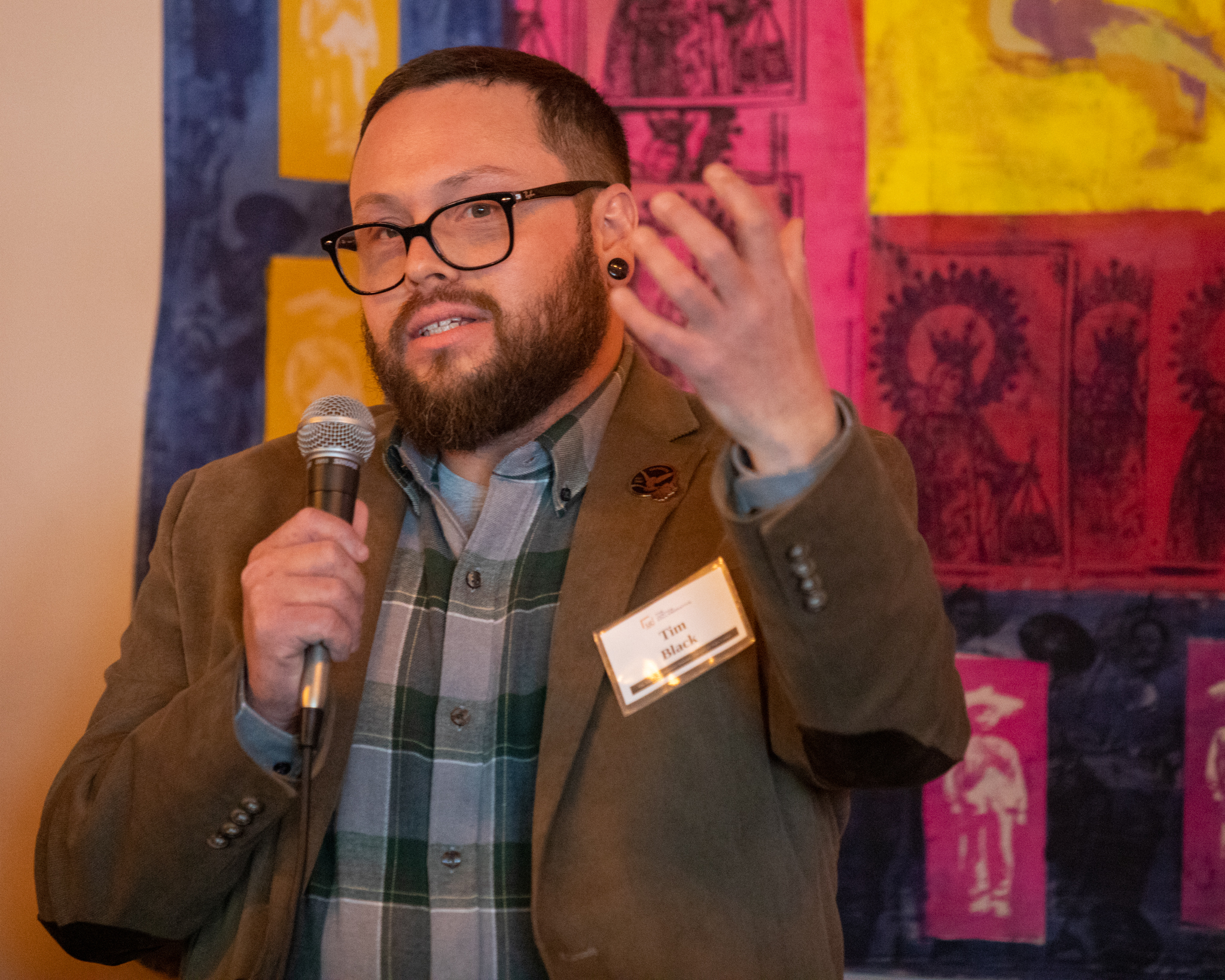 CAHOOTS, Tim Black explained, started in 1989, and “our program puts an EMT and a crisis worker in a van… We’re fully integrated into the public safety infrastructure in our community to fully respond to behavioral health crises.”

He explained, “In 2018, we handled almost 24,000 calls for service which made up almost 20 percent of the entire public safety call volume for our region.”

He said they did that with about three to four percent of the law enforcement budget.

Mr. Black described the impact of having them respond rather than law enforcement.  He noted the difference between the command approach and theirs, which approaches from a distance and gives people respect.

“CAHOOTS is amazing,” said representative Herod.  They don’t have a strong tax base in Colorado, she said.  “We have to go to a vote of the people to increase taxes and it doesn’t usually work statewide.”

They passed a measure to put $45 million for mental health treatments.  “We need a radical change to our mental health and substance abuse infrastructure.  The band aids and the piecemeals do not work. “

For someone having a crisis they can either be put on a 72-hour hold and then wait six months for services, hoping that nothing happens, or “go commit a crime and get into drug court that way.”  She added, “It’s irresponsible that that’s our response.  We’re seeing it in our justice—we have one of the highest recidivism rates in the nation in Colorado.  We’re setting up a system that really acts to increase crime and decrease safety.”

Ms. Hardesty added that she supports CAHOOTS as well, but everyone needs to know what is happening in their own community.  “My folks will not go out with the police,” she said.  “In our community, we will have the opportunity to not go through the police.” 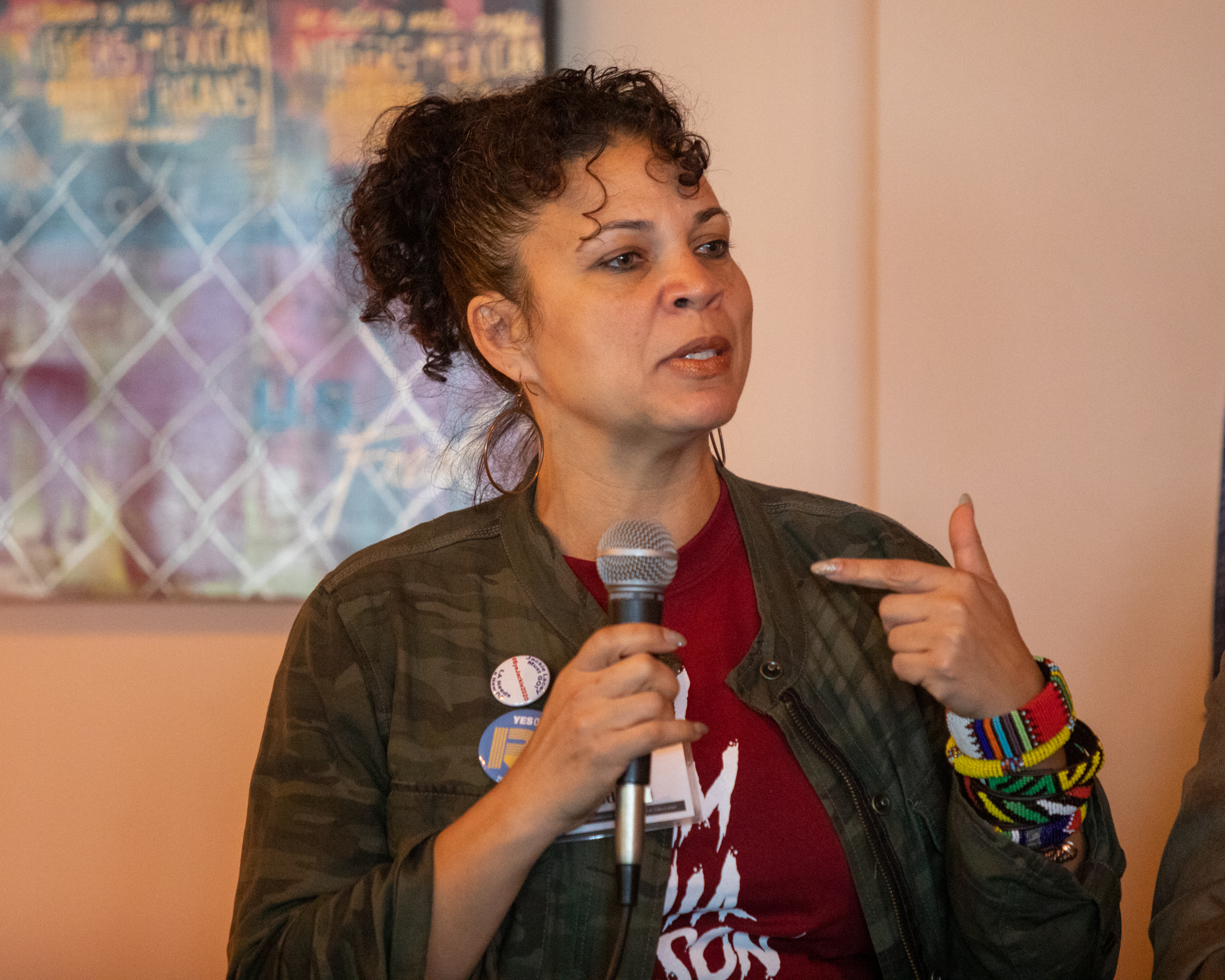 Melina Abdullah said in Los Angeles, while they have smart teams, the police are in the lead.  “When the police come out, they have brought the murders…  What’s being rolled out now is something that sounds very similar to (CAHOOTS).”

“Police evolved from slave-catching.  Police kill black people.  So we don’t want you to be in partnership with them,” she said.  “You are harming your reputation with the community because if you work in partnership with police, you become police to us.

“For black folks, if you’re rolling with the police, we don’t want to see you,” she said.  For them, they need a systemic response that includes neither police nor police partnerships.