SAN FRANCISCO – While neither Maria Evangelista or Michelle Tong, deputy public defenders in San Francisco running for judge, want to acknowledge it, the media has declared both to be winners in two of the three open judge seats.  The third is a tight battle between Carolyn Gold and Kulvindar Singh, a DA, where Ms. Gold leads Ms. Sing by about 600 votes with perhaps 100,000 votes yet to be decided. 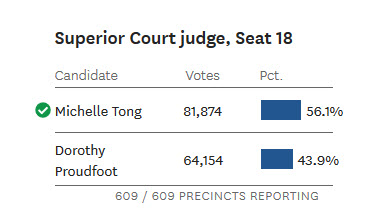 She said, “The campaign has been authentic to the work that I’ve dedicated my life to…  It’s just a reflection to what I’ve given to my work life.”

Ms. Tong said, “I felt confident that when I started this journey that I could win.”  She said that people have asked her if she was in this to win and her response was, “Who does this for fun?  Who does this to make a statement?”  She said, “For me, that’s a (crazy) question to ask me.”

She added, “When I set out this task, I had every intention to win.  I knew I could win.”

Michelle Tong didn’t want to say necessarily that this was part of some progressive moment, although in the last four months, San Francisco has seen now a public defender win as DA, and likely two public defenders elected as judges.

She noted that, as a candidate out there, she heard a lot of criticism.  “I got a lot of concerns out there about Chesa Boudin and me being a public defender.  Those are the things that really stood out for me.”

She said, “I was always concerned that maybe I was living in a bubble.”  She said, “I thought maybe there’s a whole universe out there that I have no clue about.”  But she added, then “you can look at the way the vote came down.” 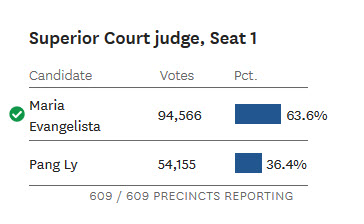 Maria Evangelista said, “I’m very excited for the votes that have come in so far.  I’m looking forward to all of the votes being counted—I believe there is about 90 thousand that haven’t been counted.”

When asked if she was declaring victory, she responded, “Absolutely not.”

But she said, “I’m very happy and excited about media sources declaring that I’ve won.

“I ran on the principle that I’m going be a judge for everybody,” she added.  “It was all about coalition building and consensus building.”

For her, the success was, “The trend for everyone was equality on the bench, equality for everybody.”

She said that is what she has dedicated her life to and believes that people have supported her because, as a public defender, “I had an amazing platform to help people in every community.”  She said, “In the collaborative courts it’s about making sure that people don’t come back.

“Being a judge is about being non-partisan and it’s apolitical,” she said.  “Everybody that supported me, was supporting me because they saw something in me that was part of themselves.”

She said that the playing field is not been level and the bench is still stacked two to one for prosecutors over public defenders.  “But I think it is also an important statement to make—public defenders can also be fair,” she said.

She added, “As a Latino woman I’m really proud to have won because I’m going to be the first Mexican-American woman to be elected to the bench in the history of San Francisco.”

For Maria Evangelista, the key difference this time around is that “I ran for an open seat” and she didn’t run in a slate.  “I ran on myself—there was no political platform.  I wanted equality on the bench.  What really matters is that I talked more about my personal experiences.