(The following was a letter to the City Council dated April 6, submitted by the author to the Vanguard for publication).

Last Tuesday the Council approved an ill-advised no-bid, sole-sourced land lease option and contract to Bright Night Energy. There are many deficiencies in both the process and the underlying agreement accepted by the City. This communication, however, focuses on the experience and qualifications of the leasee, BrightNight Energy.

As part of the resolution authoring such a contract award, Council stated

This information is completely false and Staff either knew this or should have known it. In fact, BrightNight is NOT a leading solar company as Staff otherwise represented to Council.  They are  actually a start-up company formed only a little over a year ago in January, 2019 as a Limited Liability Corporation in Delaware. It was only registered in California as a Foreign Limited Liability Corporation on February 11, 2020 which, perhaps not coincidentally, was the very same day that the Council reported out from Closed Session that they had directed staff to move forward to secure a preliminary agreement with BrightNight. BrightNight’s website also only lists a residential home in El Dorado Hills as its sole US office and has no phone number listed.

Further, NONE of the projects listed on BrightNight’s website (at https://brightnightenergy.com/markets-projects/) as evidence of their experience were projects in which BrightNight Energy had actually even participated as a developer or subcontractor. Nor could they have done so because BrightNight was not even in existence at the time the projects were completed!

For instance, under “Historic Project Successes” under the subheading of  “One of the Largest Battery Storage Systems Providing Resource Adequacy“, a massive battery storage

project at Aliso Canyon in Southern California is listed. The write-up on BrightNight’s website describes the system and implies it was done under the auspices of BrightNight but then only notes in a small footnote at the end of the description, “This project was developed by a BrightNight team member.”. But they do not state the team member involved or the role they played in the project or which company that actually did developed the project.

Under “One of the World’s Largest Solar Power Plants“, the 800 MW Mount Signal Solar Farm was discussed of which the first phase was operational in 2014.  Mount Signal solar farm was developed by AES Solar and 8minute Renewables LLC not BrightNight as implied in their website. The nexus to BrightNight apparently is only listed as a footnote to this project description on the BrightNight’s website stating that “This project was developed during Martin’s time as CEO and Founder of 8minutenergy Renewables, LLC”. Martin Hermann is currently the CEO of BrightNight Energy.

BrightNight also lists the logos of 40 large energy providers and utilities on its website under the banner heading “Our Experience Helping Major Players in the Energy Market” but does not disclose any actual services they provided to these entities or projects in which they participated. It would be useful to know exactly what goods or services, if any, were actually provided by BrightNight to any of these corporate entities or whether they are similarly claiming corporate experience where none actually exists.

These are not the makings of the experienced solar energy development company which is in direct conflict with the resolution passed by Council authorizing the execution of the land lease option agreement.

Further, one independent source, Strategic Solar Group, has one page on its website entitled “What are the Best Solar Farm Companies?” that list the following companies. Note that BrightNight is not listed: 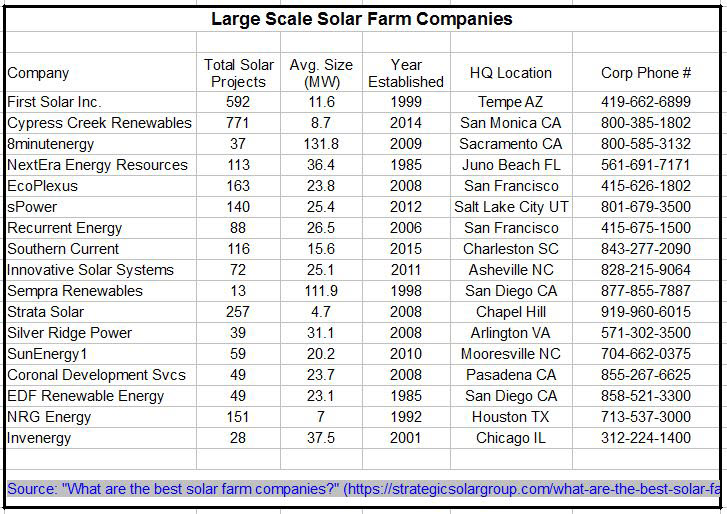 BrightNight is clearly claiming experience and credit for projects for which they were not even involved. The deception by BrightNight in misrepresenting their corporate experience and capabilities is perhaps the most telling shortcoming of their application. The failure by Staff to report these shortcomings make it obvious that Staff has not even done the minimum requisite due diligence necessary to ascertain if BrightNight can even perform under the provisions of the solar land lease agreement.

Another discrepancy in the BrightNight due diligence performed by Staff is that under the Agenda for the February 11 Closed Session for the City Council meeting, the following parties are listed:

Negotiating Parties: Davis Energy Technology Center, LLC. or an Affiliate, in Either Case a Subsidiary of BrightNight, LLC (“BrightNight”)

Under Negotiation: Price and terms of payments” (Emphasis added)

However, Davis Energy Technology Center LLC is NOT listed on the California Secretary of States’ website as a properly registered LLC in the State of California and execution of any agreement with such an entity by any municipality would therefore be a violation of California law and the contract itself would be null and void.

These misrepresentations by BrightNight are only the tip of the iceberg in terms of the other legal and financial shortcomings Staff has obviously taken in their evaluation of this project’s merits for the City compared to what should have otherwise been investigated and disclosed had proper due diligence and/or disclosure to Council been performed.

Other glaring shortcomings in Staff’s analysis of the contract include 1) failure to obtain competitive bids for the land lease in violation of state law and 2) failure to investigate other solar financing opportunities (such as was done Yolo Co) which is in violation of just plain common sense.

These failures will potentially cost the City or its utility-using Customers up to tens of millions of dollars and possibly deprive Valley Clean Energy of the economical utilization of a local source of renewable energy for the use of their customers in Yolo Co.

Neither Staff nor any of the Council members have ever had any significant experience in negotiating a large solar leases of this type and their inexperience and the obvious potential harm to the City’s financial returns are now apparent. All of these problems could have been avoided had Staff’s and Council’s hubris otherwise been tabled and the incredible specific solar and industry expertise of the City’s Utility Commission and Natural Resources Commission been called upon to weigh in on the project’s merits.

I just read that a number of members of the Utilities Commission and/or the Natural Resources Commission have similarly weighed in asking you to rescingthe lease and reopen the process of evaluation. Given the obvious errors committed by Staff in reporting all the facts and circumstances to you, I believe this is the least you can do to try to rectify the problem.