The Netflix series, the Innocence Files, tracks three stories over nine episodes.  The first three focus on the story of Levon Brooks and Kennedy Brewer.  Those who have read Radley Balko’s book are well familiar with this story and the story of Michael West.

One of the big things we started to learn when Barry Scheck and Peter Neufeld started analyzing DNA evidence and proving that convicted individuals were wrongly accused is they exposed many huge problems in the criminal justice system.

A big one is that we were allowing evidence in under the guise of science that wasn’t scientifically based at all.  If you watch CSI or other shows, you will see the marvels of

science used to solve crimes.  It is all very alluring.  The problem is that most of it is not science at all—it is assumptions that have been admitted as scientific evidence.

But real science is based on rigorous testing standards—double blind methods where evidence is scrutinized to see if it is reliable and replicable in a lab setting where conditions are controlled.  And much of what we know as forensic science—things like hair analysis, bullet lead analysis and bite mark analysis—had never been scrutinized.

And so people like Michael West have gotten rich off his post-mortem “bite mark examinations.”  Analyses that are flawed and careless and even reckless.  The Innocence Project and people like Radley Balko have exposed that.

As Radley Balko described West in 2016, “In the early to mid-1990s, Michael West became a rock star in the world of forensics. West claimed to have developed techniques that he and only he could perform. According to West, those techniques could both identify bite marks on human skin that no other medical specialists could see, and then match those marks to one person, to the exclusion of everyone else on the planet.”

Such an exploit helped to put a lot of people in prison—a lot of them unfortunately innocent.

Two people that Michael West sent away were Kennedy Brewer and Levon Brooks—two men who were convicted in the separate murders of two girls in the same rural Mississippi town in the early 1990s.  The key evidence: bite mark analysis and testimony by Michael West.

As it turns out, neither girl had suffered human bites at all and it was more likely insects and crawdads that created the marks—post mortem.

The really astonishing thing is that not only did Michael West agree to go on the documentary and give his side of the story.

He put on a performance and became arrogant and combative in the face of charges that he put innocent people into prison.

He defends himself.  We see his office—the hanging LSU banner with the hanging confederate flag.  And there he is, smugly smoking a cigarette, arguing, “You have to be a blithering idiot not to see the connection.”  Defending the bite mark analysis.

Then he launches into his passionate defensive.

He said, “I’ve held many titles in my life.  Coroner, Ranger, Captain.  But I think one of the titles I wear best in pride is notorious.  If you do a google search of me, you would think that I was evil incarnate.  It’s all the propaganda of the Innocent Project.”

He takes on a high-pitch, mocking voice. 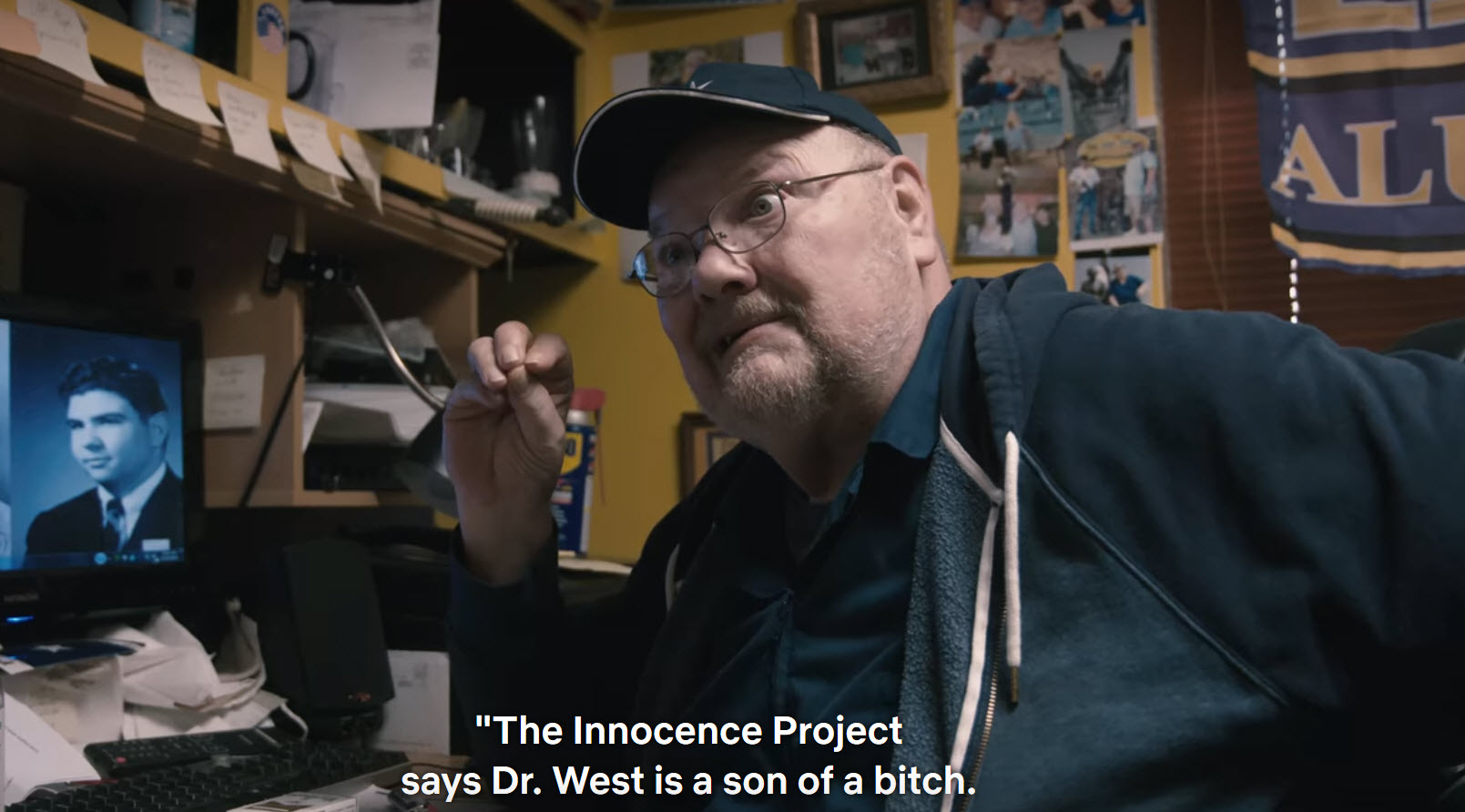 In this mocking voice he says: “The Innocence Project says ‘Dr. West is a son of a bitch.  He lies he cheats, he puts people in prison, he invents evidence!  Oh, God!'” 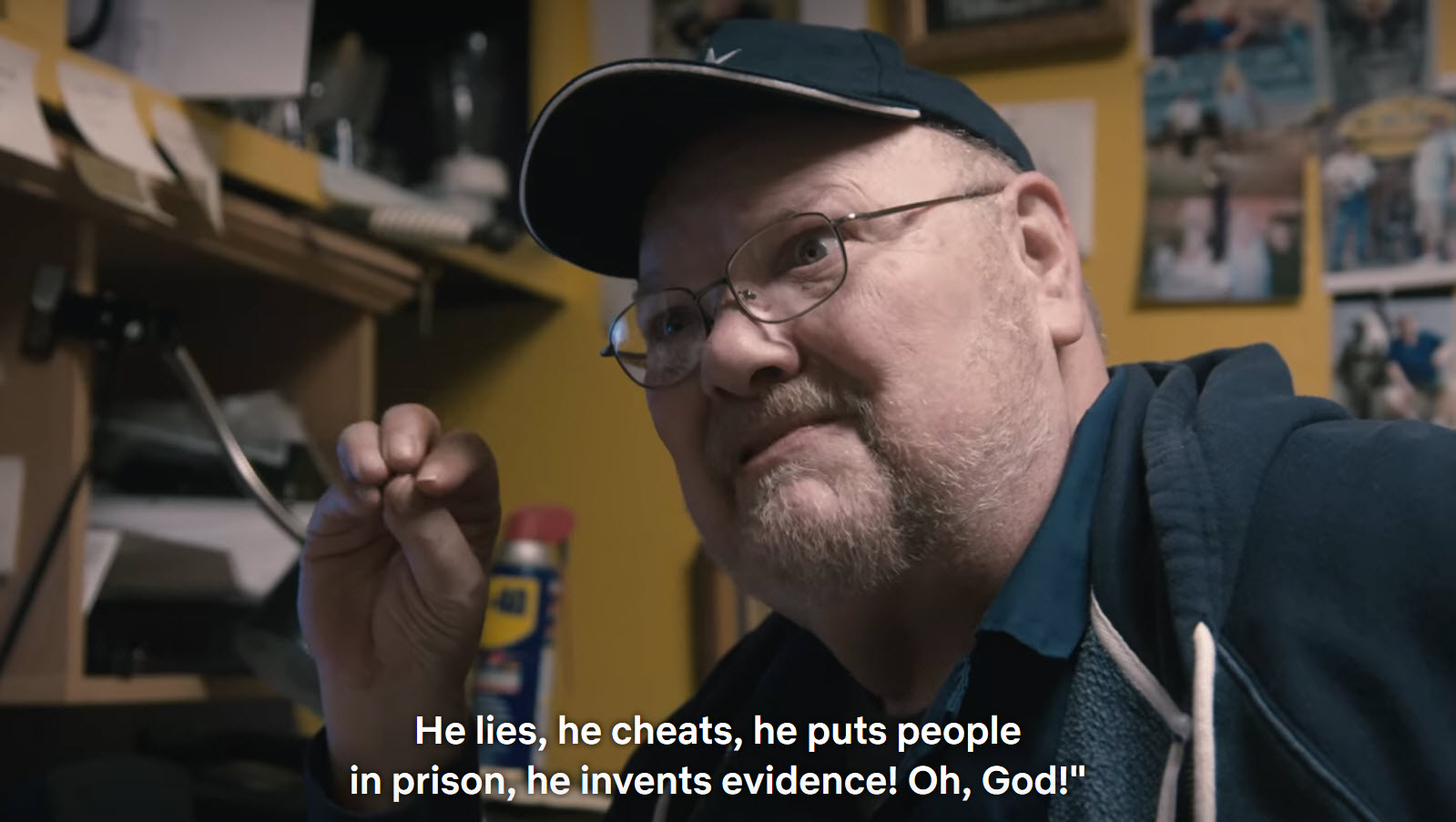 He continues: “Dr. West is from Mississippi—he’s a racist.” 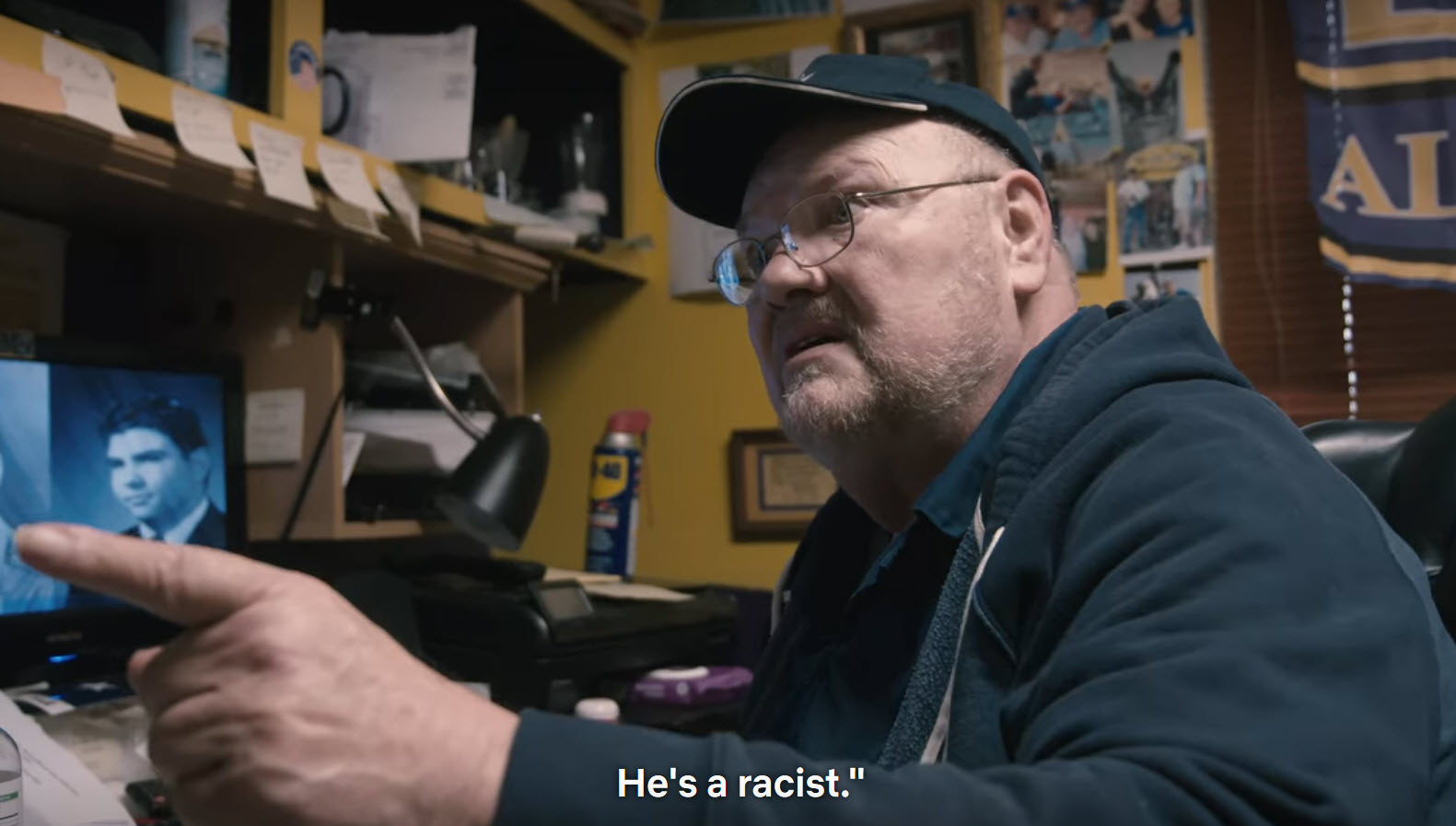 Then he argues that the Innocence Project is the problem.

He said: “They don’t give a damn about the truth.” 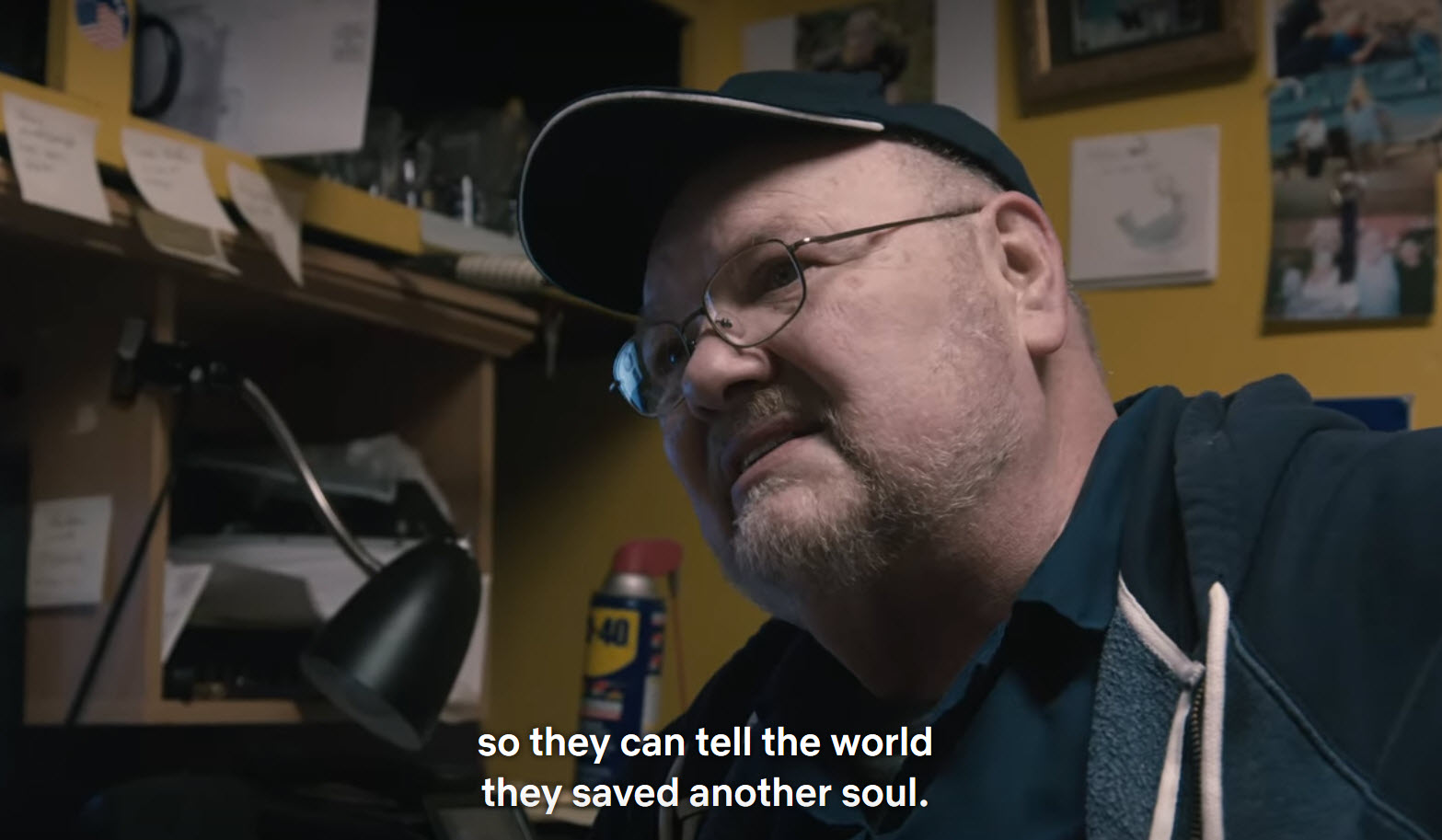 He argues, “They just want this guy released from jail so they can tell the world they saved another soul.” 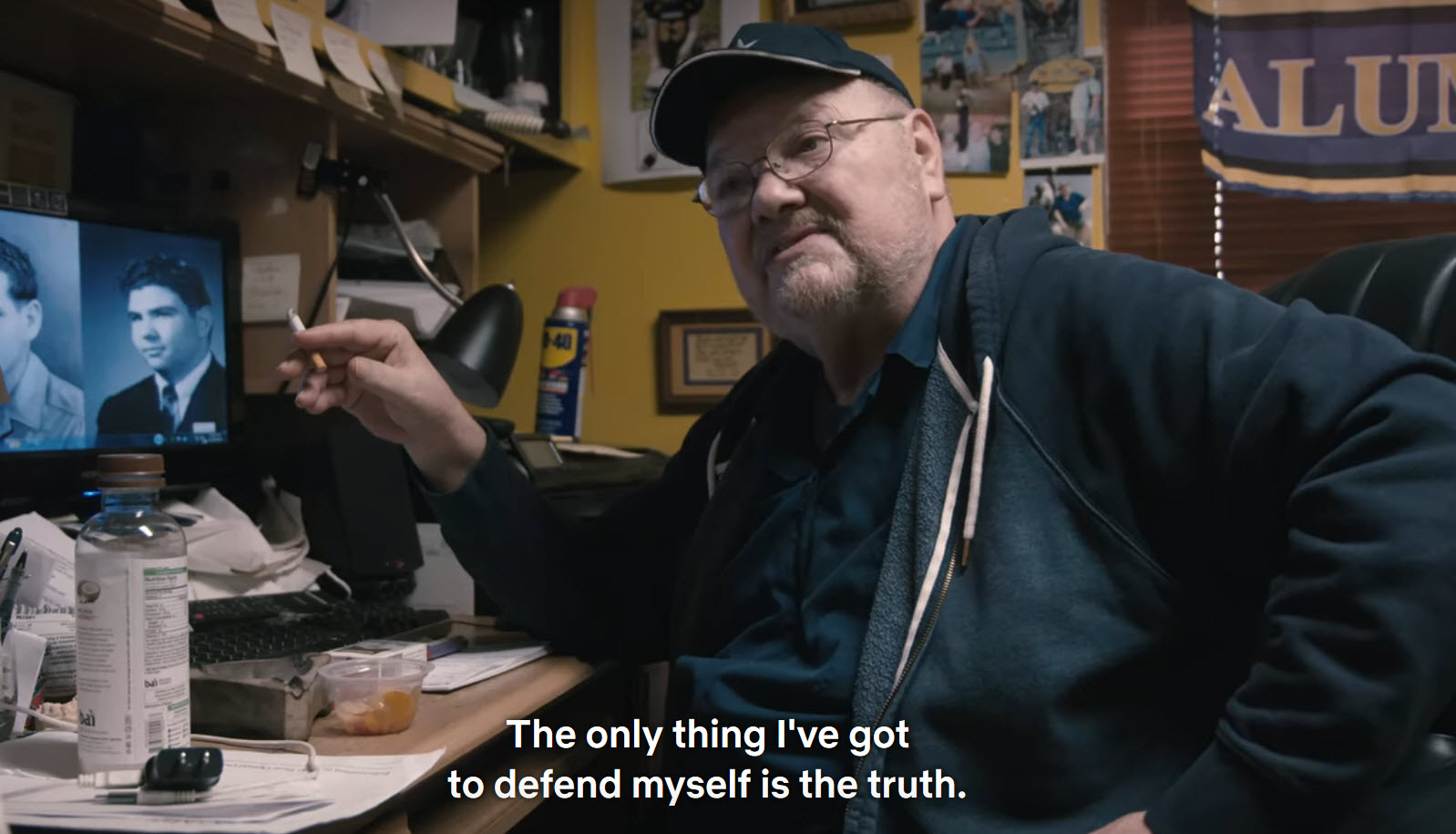 He continued: “The only thing I’ve got to defend myself is the truth”

He added, “And the truth will defend me.”  “Deo vindictus.”

But is he defended here?  He and the DA have to argue, after the DNA in one case excludes the wrongly convicted Kennedy Brewer, perhaps he sold the girl for crack, that wouldn’t be the first time.  But now you are changing the theory of the crime.  It is a problem that your evidence causes you to speculate rather than prove beyond a reasonable doubt.  And yet, Mr. Brewer remains in prison for another seven years after DNA showed he was not the man to rape the three-year-old girl.

As it turns out, this wasn’t the only time Michael West went off the rails.  Radley Balko in 2016, as he was writing the book on the Brooks and Brewer cases, describes a deposition on the case Lee Howard, who in 1994 was convicted of the rape and murder of an 84-year-old woman, partly on the basis of Dr. West’s testimony.

Writes Balko, “West frequently has been brash, prickly, and prone to fits of braggadocio on the witness stand. This time, he was also belligerent, profane, and combative. “  (The transcript is worth a read – Balko himself has some excerpts here).

I don’t know if West understands, but he has been portrayed as the bad guy in all of this—someone who has personally profited off of junk science.  His conduct plays into that enormously.

He wants to argue he’s not a racist—I don’t know whether he is or isn’t—but he does himself no favors with the confederate flag and the flippant attitude.  These are people’s lives he has destroyed.  Unfortunately, while he makes a convenient bad guy, the real bad guys are those such as the one with the ironic name of Forrest Allgood (you can’t make this stuff up) and the system itself that failed to test the accuracy of such proclamations.

30 thoughts on “My View: Disgraced Forensic Dentist Goes on the Attack on Innocence Files”