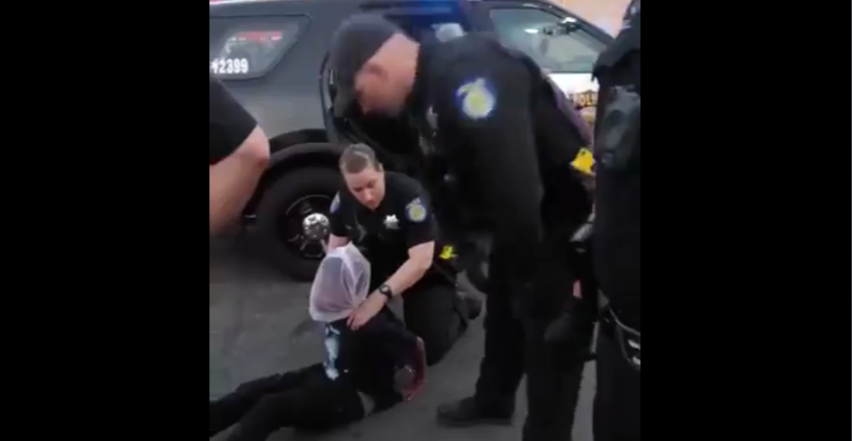 SACRAMENTO – On April 21, 2019 – a little more than a year after unarmed Stephon Clark was gunned down by Sacramento city police in his grandparent’s backyard, spawning militant protests and costing taxpayers millions of dollars from lawsuits – city police put a “spit bag” over the head of a frail 11-year-old Black youth.

Now, about a year after the incident in Sacramento’s Del Paso Heights area, the city is being sued again, according to a civil rights complaint filed here in U.S. District Court Wednesday by the Los Angeles Law Office of Dale K. Galipo and Law Offices of Ben Crump.

The minor, now 12 and identified only as “I.B.” in the suit, was chased down, gang tackled and mistreated for allegedly “panhandling” and asking people to buy food for him, according to the suit. He eventually was arrested for, police claim, spitting at police officers.

The use of the bag caused outrage in the community, just as Clark’s death led to a series of street protests and lawsuits against Sacramento law enforcement – some suits are still outstanding – that really only came to a standstill with the threat of COVID-19 and stay-at-home orders in early March.

In the lawsuit filed this week, among the defendants are the city of Sacramento, Sacramento Police Chief Daniel Hahn, a number of SPD officers, Paladin Security and its officers, Wienerschnitzel and its parent Galardi Group and several employees.

Plaintiffs include “I.B.,” his sister “S.J.,” also a minor and their guardian and mother Latoya Downs.

The lawsuit alleges the youth was a victim of false arrest, excessive force, battery, false imprisonment, intentional infliction of emotional distress and various violations of his constitutional rights.

Police claim I.B. was running from private security and was held by a Wienerschnitzel worker when city police officers intervened, cuffed the child and put the white spit mask over the minor’s head, while he was calling for his mother.

News reports quoted one officer describing the youth as a “little terrorizer,” but Mark Harris of the Ben Crump Law Firm, said he was attending an Easter Sunday carnival

When Downs arrived at the scene she was upset, said Harris, because I.B. has upper respiratory disease and worried that he would have trouble breathing with the mask over his head.

“When I asked what was going through his mind, he said, ‘I thought I was going to die,’ ” Harris told the news media. “He didn’t want to go inside to the police car because he thought ‘I would never come out.’”

“I’ve never heard a situation where a 12-year-old child had a bag placed over his head,” Harris said. “I don’t care what you call it, a spit propulsion, repulsing device, they can call it whatever they want, a bag is a bag is a bag.”

According to the lawsuit, I.B. “repeatedly asked for his mother to be called” while an officer “had his arm against I.B.’s neck and was choking I.B.”

The suit maintains that I.B. repeatedly asked to be let up and told officers “he could not breathe,” and asked for the “spit bag to be taken off of him.” Officers refused.

Officers also would not contact I.B.’s mother – Downs – but when she arrived after being called by her daughter, she, according to the pleading, “panicked because I.B. suffers from an upper respiratory disease and she worried that he could enter into an asthma-like fit of breathing difficulties. (She) pled with Defendants to remove the spit bag from her son’s head but her pleas were ignored.”