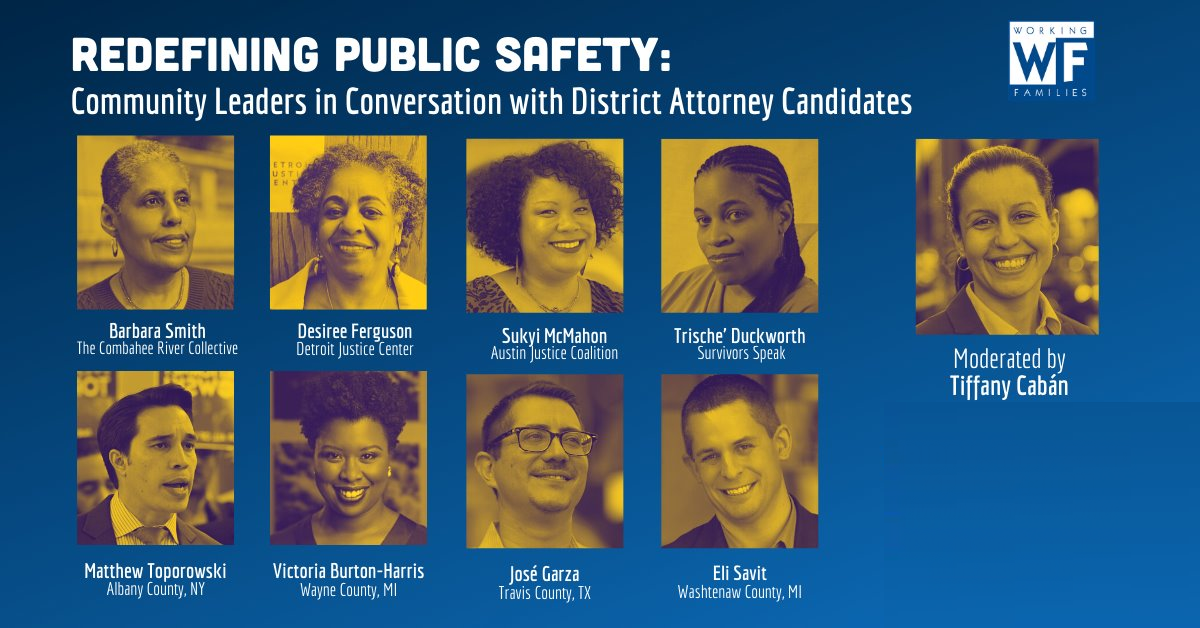 On May 22, Working Families, a progressive grassroots political party working to build a multiracial movement of working people to transform America, hosted a webinar with community leaders, asking DA candidates from across the country their visions for public safety, and how they will be accountable to the communities if elected.

Beginning the conversation was Jose Garza, DA Candidate for Travis County, TX, and Sukyi McMahon, Board Chair and Director at Austin Justice Coalition. McMahon began by sharing the story of Mike Ramos, a 42-year-old man who on April 24, while working on his girlfriend’s car, was killed in a parking lot by police, due to a call that reported a drug deal and weapons. In response to this case McMahon asks Garza how he would handle this case and future cases related to police-involved shootings.

Garza discussed how DAs make personal decisions in every police shooting, the same people who work closely with the police and often receive funds from them. Garza calls for impartial prosecutors as a way to make sure there are no biases in cases of police shootings.Garza stated that when elected, he will take cases of police-involved shootings to the grand jury in order to be transparent.

“There is a way to pair, making sure the community has the information they need, and making sure every case is decided fairly” says Garza.

Next in conversation was Eli Savit, DA Candidate for Washtenaw County, MI, and Trische’ Duckworth, Founder and President of Survivors Speak, a movement focused on bringing together survivors of crime. Duckworth outlined wrongful convictions and asked Savit why Washtenaw County doesn’t have a conviction integrity unit.

Savit, in response, said not having a conviction integrity unit now speaks to the continued culture of defensiveness and insularity, which ignores victims of the criminal justice system. Savit stated we need more people of all backgrounds, who aren’t career prosecutors, entrenched in that office—prosecutors that won’t be defensive.

“You asked what I’m going to do, it’s very simple. We’re going to have a conviction integrity unit,” Savit said if elected as DA, and he will take it seriously to right past wrongs. “We’re going to take

seriously being at your table with survivors speaking,” said Savit to Duckworth.

Moving the conversation, Duckworth began discussing the 2014 Michigan case of Aura Rosser, a 40-year-old African American woman who was in an argument with her boyfriend when two officers entered her house. Rosser approached them with a knife and was killed by police. After a police investigation, the county prosecutor announced no charges would be brought. Duckworth asked Savit, “The community remains hurt. How would you handle this as a prosecutor?”

“The case was mishandled from the start,” said Savit. He said it is impossible to maintain impartiality and the appearance of that because the DA works so closely with the police. Savit called for the need of special prosecutors for officer- involved shootings, in order to look at these cases with independent eyes.

Next joining in was Desiree Ferguson, Legal Director at the Detroit Justice Center, in conversation with Victoria Burton-Harris, DA candidate for Wayne County. Ferguson asked Harris, “Do you have a vision for reducing criminalization and criminal punishment in our community?”

Harris said, “We can work collaboratively with our community partners to invest in our Black and Brown brothers who are returning from long sentences due to drugs…investment in our community is the best investment in safety and justice.” Harris called upon several progressive DAs—Kim Fox, Rachel Rollins, Larry Krasner, Chesa Boudin, and to follow them in their work in reducing the jail population and gun violence.

Harris said we shouldn’t waste taxpayer money on non-violent misdemeanors like loitering, unregistered vehicles, driving without a license, etc. Instead, she advocated for the end of mandatory minimums and mandatory sentencing. She said we need to end the practice of threatening long sentences to force plea deals on the innocent.

“When we see incarceration as the answer to violence, we are not only traumatizing, we are exacerbating the problem…We can stand together and demand more and better for our people, but power concedes nothing without a demand,” said Harris.

Lastly joining in was Barbara Smith, Co-founder, the Combahee River Collective, a black feminist organization, in conversation with Matthew Toporowski, candidate for Albany County, NY District Attorney. Smith asked Toporowski, “What are your thoughts on forming and transforming our system, riddled with racism, through your work as district attorney?”

Toporowski said we cannot talk about reform without talking about structural racism. He said we need to acknowledge that bias exists at many discretionary points within the system from police, prosecutors, judges, etc. He said there needs to be office staff that reflects the community, and currently in office there are no attorneys of color. “People need to see people like them, to know that they will be treated fairly,” said Toporowski.

Toporowski discussed Kalim Lewis, a man charged with the possession of a gun that wasn’t his, due to a search warrant that was not meant for him. He said jury selection makes it hard to get a fair trial if it’s not representative of the community. Toperowski said the current DA David Soares filed a motion to remove the only two African Americans off the jury and won. He said this is an example of current DAs increasing their options to win and seeking convictions only across racial lines, and it’s unacceptable.

“Seeking truth and justice is the goal and that’s done by being fair,” said Toporowski.

As the webinar came to a close, Tiffany Caban opened it up for discussion and read questions submitted from viewers across the country. Each of these DA candidates are running on platforms intended to fix the criminal justice system and to make sure that it becomes a much fairer process.