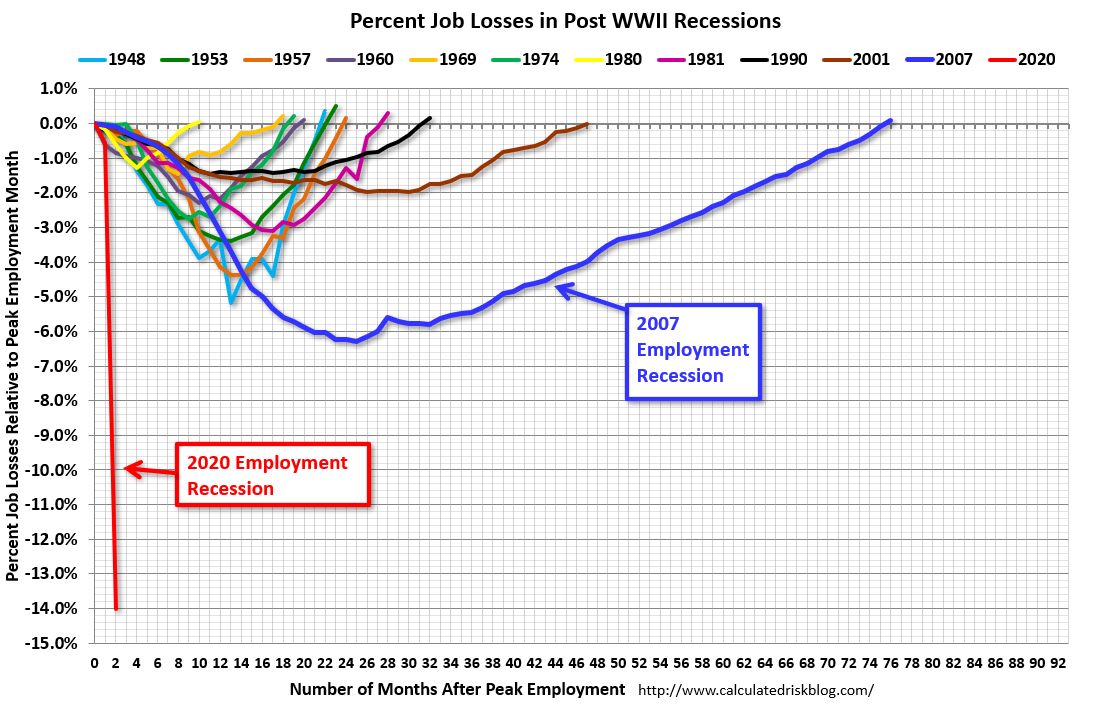 Twenty million jobs lost in April as unemployment jumped officially to 14.7 percent—a figure that no doubt understates the issue, and a graphic in the NY Times illustrates just what that looks like.

There is perhaps one bright spot: 80 percent of those unemployed believe they have been temporarily laid off and expect to return to their jobs in the coming months.  But some experts disagree with that, arguing that these furloughs are permanent, not temporary and that the optimism is misplaced.

The key question is, what do we do to stem this?

The administration has largely doubled down on the strategy of trying to get states to re-open as a way to re-start the economy.  While that is tempting, in the end for a lot of reasons I don’t think that will have the effect they want.

For one thing, re-opening is likely to start driving up the infection rates and the death tolls.  That will swing the pendulum back and ratchet up the pressure to shut things down again.  We have seen the models for what is likely

to happen in the next two months—and that is going to make it hard to really re-open, and harder still to get any economic benefit from doing so.

Another problem is that people are not dumb.  Just because the governor says re-open doesn’t mean people will go back to business as usual.  Oh sure, some will.  Some will go to restaurants, line the beaches and take unnecessary risks.

FiveThirtyEight in an article earlier this week noted that “on the front end of this crisis, Americans weren’t deciding what to do based on politics. Americans living in red states appear to have taken the crisis plenty seriously; data shows that residents there were staying home well before their governors issued stay-at-home orders.”

And on the back end of the orders, you will probably see the same thing.  Even if they are not required to, most Americans are not going to chance going back to business as usual.

That probably means two things—that the dire predictions on new deaths is too high, especially if high risk locations figure things out, and it means that the chances for recovery are lower than expected.

In the end, I think re-opening too soon will not restart the economy because there will be a lack of confidence by reasonable people—at least that it is safe to do so and it will prolong this outbreak.

Washington right now doesn’t seem to like the idea of the ongoing stimulus payment.  I get it.  They are afraid that deficits will soar.  They will.  But guess what, they are anyway because people’s tax payments are falling.  Might as well cushion the economy.

There is fear that people won’t work if they can get their $2000.  That’s probably true for some people.  But this is a temporary solution and if they don’t want to work, they can stay at home and not risk getting sick or getting others sick.

If we keep key businesses afloat, they will be more likely to rebound than if we allow them to fail.  People on both sides of the divide don’t like this—I get it.  But once again, this is an emergency.  It will be much harder to restart the economy if businesses fail than if we keep them afloat.

Third, there are businesses that can safely open.  What was interesting was hearing from the key sectors about how they managed to keeping their businesses open.

First, the employees that could work from home—are.  I still think there are a large number of people who commute from home that don’t have to do that every day.  They found that productivity wasn’t bad.  People get used to change and they figure out ways to get their work done.

Second, there are protocols for people working in the office.  Temperatures at the door.  That of course doesn’t capture the asymptomatic but, then again, we still don’t know even relative contagion levels there.  Gloves and masks.  Social distancing.  Frequent disinfection.  You definitely don’t want to pack a room and I see a few businesses that are not doing enough to protect their employees from themselves—but this is something that can be employed when people have to go to work.

Third, a lot of businesses can function.  Most retail you can switch to online interfaces, and then pick ups or deliveries.  There is no reason why people have to go into stores these days.

Restaurants can switch to ordering at the door and delivery.  I have seen a bunch of restaurants that don’t even let their customers in.  They simply order at the door, pay.  And they either have ordered in advance or they wait outside until the food is ready.

Consultants and therapists and even some doctors’ appointments can happen via video.

Barry Broome on Thursday noted that a lot of their work can be done via Zoom.   But getting creative and collaborative needed person-to-person interaction.  I guess it also depends on the setting, because I have actually found that three-person Zoom meetings and brainstorming can work even remotely.

I think if the government can prop up people and industry with ongoing infusion of money, the economy can slowly start to adapt and rebound.  There will be businesses that fail.  But there will also be new businesses that emerge which are prepared to meet the new demands.

None of this is a replacement for re-starting the economy, but I think what we are going to find is that people don’t want to re-start it now and most will err on the side of caution  With proper protocols, a lot of businesses should be able to operate—and we should allow them to do so.

179 thoughts on “Sunday Commentary: It’s a Stunningly Bad Economic Picture – What Do We Do?”