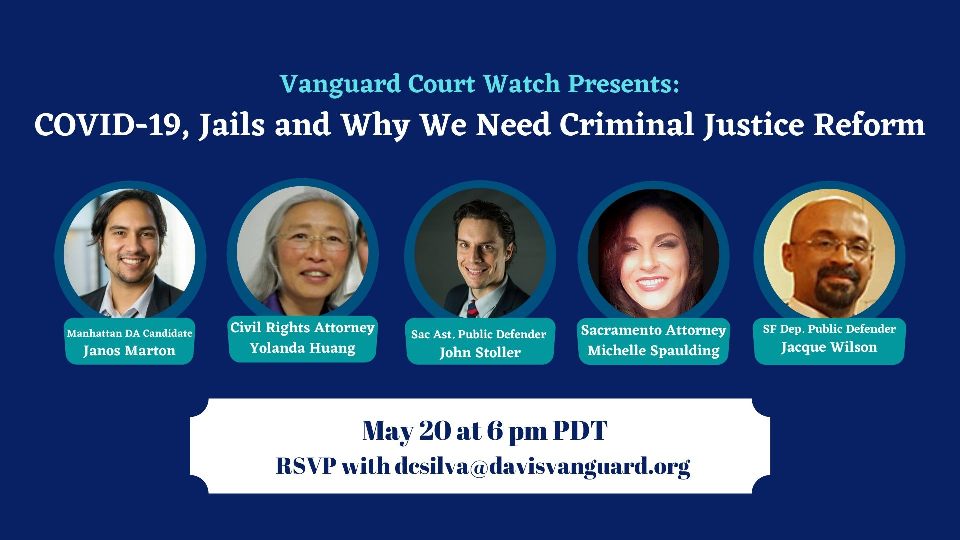 SACRAMENTO – Lawyers from New York to the San Francisco Bay Area and Sacramento weighed in on the murky but deadly subject of COVID-19 in local jails Wednesday night, in what is the first in a series of online “Justice” webinars, sponsored by The Vanguard.

During the hour-long webinar, “COVID-19, Jails and Why We Need Criminal Justice Reform,” all panelists agreed on one major point – inmates, most of them just awaiting trial and not convicted

of anything, face a death sentence when stuffed into local jails.

All in all, the participants painted a dark picture – although they tried to sound optimistic – of jails, prisons and COVID-19.

Moderator, and Sacramento criminal defense attorney Josh Kaizuka kicked things off by noting the “COVID-19 pandemic has forced the issue of criminal justice reform onto the forefront of the discussion – mass incarceration and pretrial detention have collided with the reality of COVID-19 putting people, from inmates to guards and defense lawyers, in harm’s way and forcing us to debate the question of who needs to be in jail.

“This is a discussion of COVID-19, its impact on our jails and how it is alerting many in the reform movement that we need to move forward on decarceration. As of now, there are more than 3,200 people in prison in this state who have contracted COVID-19…at least 16 inmates died,” said Kaizuka.

Janos Marton clocked in as the speaker who comes from the furthest time zone. A civil right attorney in New York, Marton is running for District Attorney in Manhattan and was involved previously in the Close Rikers movement.

“Rikers has been a horror show since the day it opened,” said Marton, who has worked on criminal justice issues all around the U.S. In fact, he noted that whenever he approached lawmakers in different states, they would ask him if his reforms had been attempted “in some place other than California.”

Rikers, though, is the target that Marton is focused on. “Generations have tried to reform it, but it’s the most notorious jail in the country,” he added. He agreed later that if you can’t “reform” or fix a jail, it needs to be closed.

Interestingly, it’s COVID-19 that kept Rikers in business. Marton said New York’s mayor and governor, among others, agreed to close it in late 2017, but before it was emptied, coronavirus came knocking.

“We wanted to get as many people out of there as possible…elderly, those with underlying health conditions,” Marton said, who added about 1,000 were kicked, but there’s 5,000 left.

Another fan of closing jails is Yolanda Huang, a San Francisco Bay Area civil rights attorney who recently filed a lawsuit in federal court in San Francisco to force the Santa Rita jail in Alameda to protect incarcerated individuals from COVID-19.

“Jails are strange institutions; they’re supposed to be short term…a box to hold you, but that’s never been true. So, you have people in pretrial living in conditions worse than in San Quentin Prison,” she said.

Huang, who has filed numerous suits challenging conditions in jails long before COVID-19 came onto the scene, said jails “provide the minimum to keep (inmates) alive. That’s it,” noting that inmates don’t even get a splint when their bones break.

Then there are the types of conditions for people who test positive for COVID.

“They get yanked out and put into solitary confinement, and get one hour a day out,” said Huang, explaining that those sick prisoners have to stick their head out of the door tray slot to have a nurse take their temperature.

Her investigation that led to the federal action also found that even shivering inmates, who have the virus, are limited to one blanket unless their attorney is persistent at harassing the jail to get another blanket.

And, while people with fevers and coughs and sore throats – all symptoms of COVID-19 – normally would have a warm drink or soup, “if you are a prisoner the only thing you can drink is from spigot in the cell…you can get two cough drops a day. That is all the medical care you get,” said Huang.

She added that deputies, according to reports she’s getting from Santa Rita inmates, are “not practicing good habits. They do not change gloves from housing to housing unit. There’s quite a big spread (of COVID-19) in Santa Rita….the jail treats it like it’s no big deal.”

John Stoller, an Assistant Public Defender in Sacramento, has filed, and continues to file numerous pleadings in Superior Court and Court of Appeal, attempting to gain release of inmates from Sacramento county jails to allow for safer conditions.

“We tried to mobilize as quickly as we could even before the shelter-in-place order,” said Stoller, who said his office filed 14 motions, seven writs of habeas corpus, seven OR/release motions in the hope of reducing the jail population.

He said one pleading is designed to release 1,674 people, claiming it was for “public policy” and “severe health crisis” reasons.

In the end, Sacramento County Superior Court ordered 46 misdemeanor inmates released, and 479 others kicked from the jails. Another 103 were supposed to be released on zero bail, but the District Attorney challenged a number of them on “public safety” grounds. The jails now have about 2,400 prisoners – the capacity is 3,700.

“We litigated the 103 and won most,” said Stoller, noting that the PD was strongly supported by medical professionals and the community.

The original motion that called for nearly 2,000 releases was eventually rejected by the 3rd Appellate District, but Stoller said that might be appealed.

“There’s still a lot of work to do. We’ve interviewed about 100 inmates about jail conditions – jails are trying…but there’s not enough soap to go around. They forbid masks and hand sanitizers. They can’t socially distance.”

Jacque Wilson, a Deputy Public Defender in San Francisco, has two of his brothers in prison, one with COVID-19, and he is working to get them released.

His brother Lance has tested positive for the virus at the Terminal Island Federal Prison in San Pedro, and he’s “medically vulnerable” with multiple health issues. The prison, said Wilson, has

more COVID-19 cases than all the state prisons combined. His other brother is in a jail in Arizona.

“In each one of these jails (and) prison they act like COVID doesn’t exist…everyone (sick) is lumped together whether they have a cold, chills, fever or coughing,” reported Wilson. He added that last month his sick brother never saw a doctor or a nurse, and last had his temperature checked in April.

“It’s a farce. There’s no such thing as social distancing. The federal government and state government simply ignore conditions they allow to exist,” Wilson said.

Prisoners, including his brothers, “don’t deserve a death sentence on the government’s watch, regardless of what (they) did.”

The panel, and the dozens of lawyers who viewed the webinar via Zoom, didn’t define any sure-fire solutions, but they all focused on fighting.

“In times of crisis, it shows what people and institutions are made of,” said Stoller, noting that the pandemic is “testing the principles of our constitution,” and adding that defense lawyers file bail and other motions regularly to try to get their clients’ release.

But he also saw a positive side, that some of the “new normal” might become permanent, like the emergency bail schedule now being used in California that makes it easier for pretrial people to be released.

That was echoed by Kaizuka, who said “sometimes moments of crisis can make change….maybe this is the one for decarceration.”

But he emphasized that the jails are a mess.

“To say that a prison or jail environment is not conducive to social distancing is an understatement. Trying to do what we do on the outside do like making masks, keeping things clean, social distancing. They can’t do that. When people incarcerated try same thing the get retaliated against,” he said.

Huang made some sobering observations.

“If we have all these social needs…people can’t pay their taxes, the severe economic crisis and people don’t have healthcare. You could do a whole lot more to benefit people,” than paying, she said, $200,000 a year per prisoner – a half billion dollars a year – at Santa Rita Jail.

“It’s not worth the money,” Huang said, agreeing with others that “there are many arguments why jails are the wrong solution.”

14 thoughts on “VANGUARD’S COVID-19 & JAILS WEBINAR: Lawyers Paint Dark Picture of the ‘Virus’ and Jails from Coast to Coast”