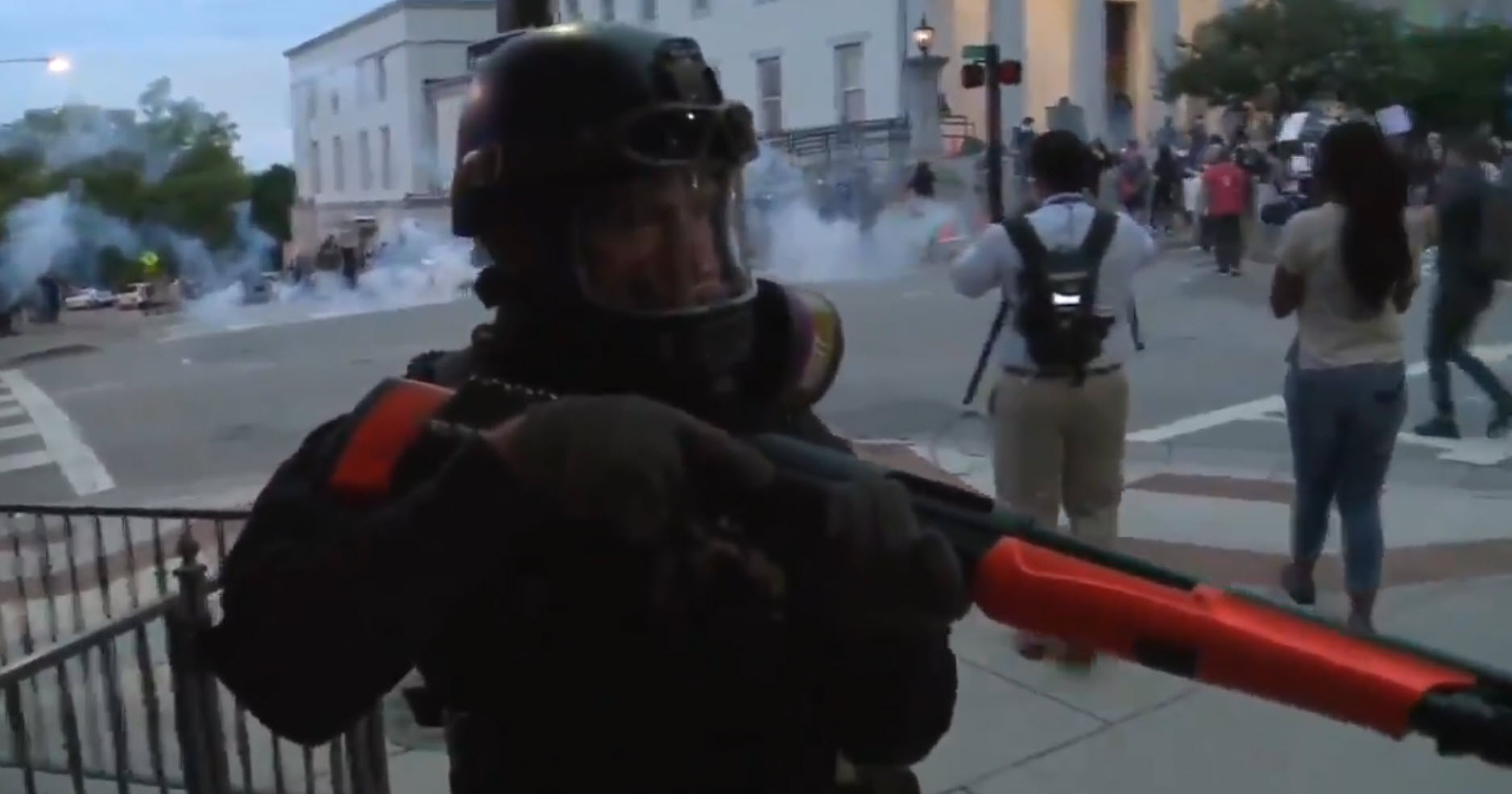 In response to the massive protests resulting from George Floyd’s death at the hands of a Minneapolis officer, municipalities have declared curfews to, they claim, reduce civil unrest.

Police officers, however, are seen blocking streets and overwhelming protestors with chemical agents, concussion grenades and hard rubber bullets to detain them, and then arrest them for curfew violations.

One video, from Huntsville, Alabama, shows police surrounding local reporters, preventing them from leaving the protest area. The group, which is seen holding cameras and sound equipment, begins coughing profusely and they turn to run in the other direction to escape the smoke. Several officers stand in a line and push them back with their batons.

2️⃣3️⃣3️⃣ Huntsville, AL: local reporters try to leave the protest area as they're overwhelmed by tear gas – but then find themselves blocked in my police who won't let them leave

“Move!” shout the officers repeatedly, as the camera man begins a coughing fit.

In Orlando, Florida, police are shown deliberately boxing in protestors before curfew, forcing them to stay in place, so that they can be arrested.

The police action is officially called “kettling,” and the maneuver traps demonstrators in one area by cutting off all exit routes, and then the group is usually arrested for not dispersing.

The video is shot from a high angle, seemingly from an apartment window, and protestors are seen marching peacefully down the street. On every crossroad, a line of police officers on bikes and in cop cars create a square, trapping the protestors in the center.

“They’re literally boxing them in,” says the woman taking the video.

2️⃣2️⃣7️⃣ Orlando, FL: police deliberately box in protestors *before* curfew, forcing them to stay in place until after curfew so they can be arrested

This is a violation of the Fourth Amendment

The video has over 260,000 views on Twitter. The caption reads, “This is a violation of the Fourth Amendment,” referring to the constitutional prohibition of unreasonable searches and seizures.

In the video, one officer is shown swiping a bike from a man and rolling it away with him. When the man tries to grab it back, another officer blocks him.

“What are you doing? Why are you taking their bikes? They said it’s because of the curfew. How the f— is anyone gonna get home?” shouts the woman taking the video.

“Figure it out on your own. You have to ride the bus,” responds one of the officers.

The woman ends the video by insisting that the officers have closed everything down, giving them no way to go anywhere.

“Police started to push us back, backing up, they had batons they kind of held them out and pushed them out in front of them. And then a white-shirt basically came and rushed towards me and grabbed my bike — and tossed it behind the line of police,” said Nick Legowski, who was in the crowd of protestors.

According to reports, the protests were peaceful until armed officers started rushing into the crowd and tossing people’s bikes to the side. A civil rights attorney classified the incident as a misuse of power by law enforcement that has historically been used to stop people from exercising their right to protest.

2️⃣1️⃣6️⃣ New York City, NY: NYPD has spent taxpayer money on custom fake taxis, so they can arrest innocent protestors who are trying to go home

“It’s illegal. It’s as lawless as it looks. There’s no justification for cops taking property like that,” said Gideon Oliver, a New York City-based civil rights attorney. “I don’t think cops went around and stole people’s cars. They do it to bikes because they can.”

More footage from New York City shows police cars, disguised as yellow taxi cabs. Protestors are shown sitting inside and standing outside the vehicle, waiting to be arrested.

“NYPD has spent taxpayer money on custom fake taxis, so they can arrest innocent protestors who are trying to go home,” reads the video caption.