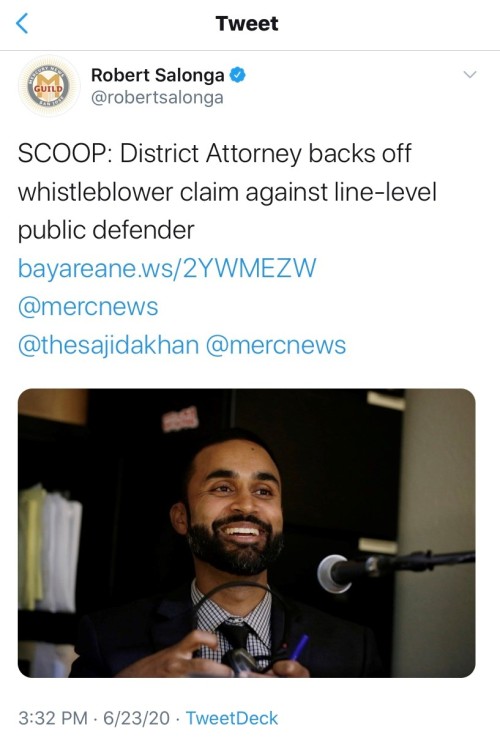 Yesterday, we got word that Santa Clara County District Attorney Jeff Rosen withdrew a whistleblower complaint against me over my blog posts where I highlighted the role of prosecutors in perpetuating police violence and dehumanizing black people through their use of the mass incarceration machine and demanded accountability of DA’s offices and system wide, sweeping criminal-justice reform.

I am thankful and humbled that so many people and organizations rallied to support me, my free speech freedoms, our collective First Amendment Rights, and this cause to manifest Black Lives Matter and to hold DAs offices to task for their complicity in the belittling of Black lives:

Attorney colleagues Jaime Leanos, Emily Galvin, Iman Boundaoui, Leah Gillis, Cuong Nguyen, Negad Zaky, Janice Lu, Stefan Kennedy, Sabir Ibrahim, Asha Vora, Indrani Balaratnam, Ash Kalra, Somil Trivedi, Madalyn Wasilczuk and Thompson Sharkey, the 650(!) public defenders from across the country who signed a letter supporting me and the dozens of friends and strangers who have sent me messages and checked in on me over the last few weeks.

I am deeply disappointed, hurt and sad that Mr. Rosen and members of his office read my editorial words calling for District Attorney’s offices to be held to task by the public for their role in perpetuating police violence and dehumanizing black lives as a call for violent protest or for protests that could result in violence against members of this union.

The rush to that place of fear belittles and diminishes my years of meaningfully living and contributing in this community, my 12 years as devoted, ethical, respectful advocate for the people I serve, and my decade of efforts to contribute to the democracy of this county, state and country through the expression of free speech and engagement in dialogue.  I find it deeply troubling that, despite my track record of non-violent work and expression, that Mr. Rosen and members of his office assumed either that I was calling for violence or that people that read my work and that I associate with would be incited to violence.

I’m thankful that Mr. Rosen withdrew his unreasonable, misplaced, baseless whistleblower complaint so that I can, with peace of mind, continue to zealously work as a public defender serving Santa Clara County and honoring the people I’ve been entrusted to represent as I have for 12 years.

But I and we must not be satisfied.

We will not be satisfied until Mr. Rosen apologizes for his use of ugly rhetoric against me and the communities I represent everyday through my skin color, beard and name.

Rosen publicly and repeatedly stated that I, through my written word, threatened his staff, endangered public servants and that I did so aiming to “incite anger and destruction toward (the DA’s office).”  He essentially called me a terrorist.

Zahra Billoo of CAIR said it best: “…at a time when Islamophobia is increasing, accusing Mr. Khan of inciting violence has far-reaching implications. It is not lost on us that Mr. Khan is a man of color, a Muslim, and someone who routinely works to protect members of marginalized communities from targeting by local police and prosecution by your office. Your rush to judgment demonstrates an implicit bias, borrowing from false portrayals of members of our communities as suspect, terrorist, and violent.”

On this point, Reverend Jethroe Moore of the NAACP also responded to Mr. Rosen, “Your response to his comments reflects a culture filled with negative portrayals of ideas about African Americans, and in this case Muslim Americans as violent, as dangerous, as terrorist, as less than human.”

Mr. Rosen’s inflammatory, incendiary, personal accusations against me are unacceptable and he must apologize.

But ultimately, we’re not satisfied because this isn’t and was never about me.

This is about tearing down and revolutionizing systems rooted in slavery, lynchings and subjugation of black people, constructs that perpetuate police violence and that pervasively belittle and devalue black lives. This is about holding DA’s offices like Rosen’s to task for their continued practices and policies of mass incarceration that result in the systemic policing, caging, decimation and dehumanization of black lives and communities.

Se we will not be satisfied until Mr. Rosen and DA’s across the Bay Area, State and Country adopt real, meaningful, tangible reforms to ensure that the value of black lives are no longer cheapened and to remedy the hideously disproportionate number of black lives languishing in our jails and prisons and impacted by our mass incarceration monster.

As Raj Jayadev of Silicon Valley De-Bug and I wrote in an editorial published by the San Jose Mercury News on June 16, Mr. Rosen can start by saying Black Lives Matter.

He can require that all prosecutors attend jail and prison tours so they witness the machine of mass incarceration in operation and the countless black people and people of color that are caged within it.

He can stop the prosecution of kids, historically mostly black and brown boys, as adults and stop sending them to adult prisons for adult prison terms.

He can stop the use of the death penalty and stop seeking mandatory life without the possibility of parole (LWOP) sentences, punishments that define people’s lives, disproportionately black and brown men, by their worst moments and ignore their prospects for rehabilitation.

He can ensure that people are not disproportionately punished and imprisoned by stopping the prosecution of “3 strikes law” status enhancements and by not locking people up for technical, non-criminal probation violations.

He can combat racially motivated policing of minority communities by ending racist gang enhancements and the racist policing tactics that these prosecutions live on.

He can join the national and statewide movements to shrink the footprint of prisons by not fighting the next wave of laws that de-carcerate rather than resisting reforms as he and his office have done with SB 1437 (amended felony murder rule) and SB 1391 (ended prosecution of 14 and 15 year old kids as adults).

He can commit to not using illegally secured evidence in prosecutions and hold police officers accountable who collect evidence unconstitutionally.

He can stop shielding police officers from liability by ending the routine practice of prosecuting victims of police violence, racial profiling, and harassment with frivolous crimes.

He can recognize the toxic influence that police unions have in protecting police from accountability and reject any campaign support from them.

Until and unless Mr. Rosen and DA’s across the Bay Area, California and this country adopt these reforms, we’ll continue to speak our truths to them, hold their seats of power to task and ultimately root them out of office at the ballot box and vote to replace them.

We’re not satisfied. The movement to manifest Black Lives Matter marches on.

2 thoughts on “Guest Commentary: We’re Not Satisfied – the Movement to Manifest Black Lives Matter Marches On.”