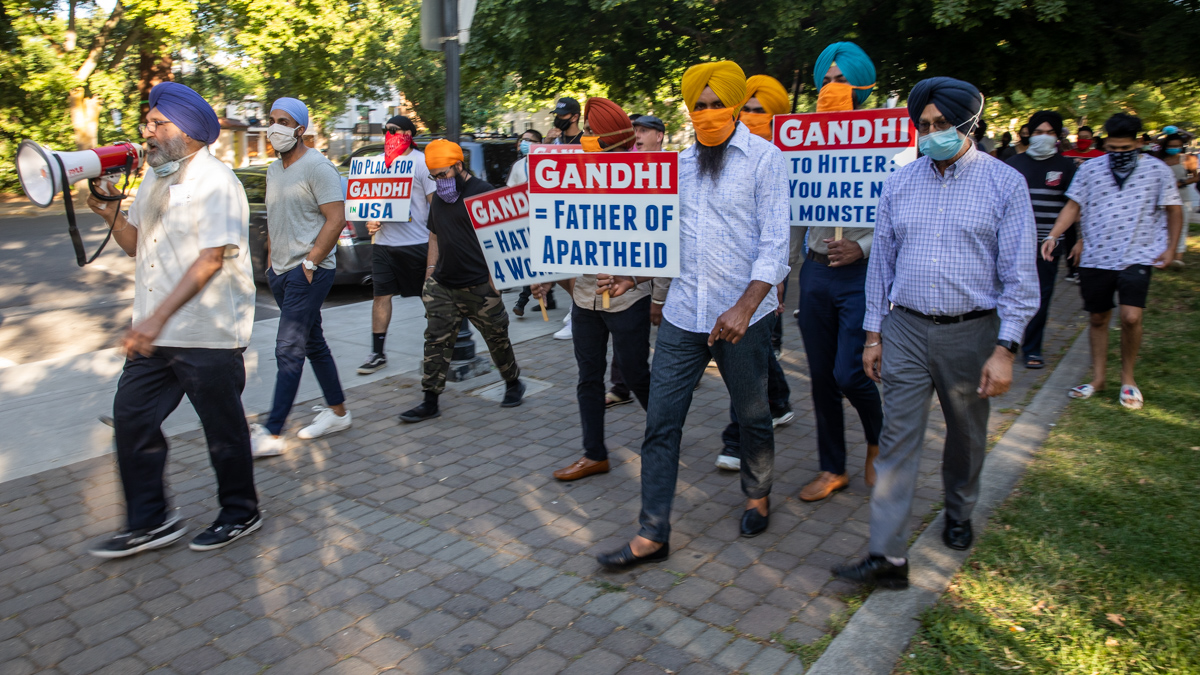 Across the country, we are seeing protesters and jurisdictions taking down statues of figures that are racist symbols, everything from confederate generals to Columbus.  But the protesters on Saturday at Central Park in Davis, largely from the Sikh community and totaling perhaps 50 or so, acknowledged that the legacy of Gandhi is more complicated—as he is viewed as a human rights symbol.

But to them he’s not.  As the community learned during the debate over the Central Park Gandhi Statue in 2016, the international symbol of non-violence protest and peace is viewed very differently by the Sikh community—to them he is their tormenter, with a legacy of racism, castes, and even sexual abuse. 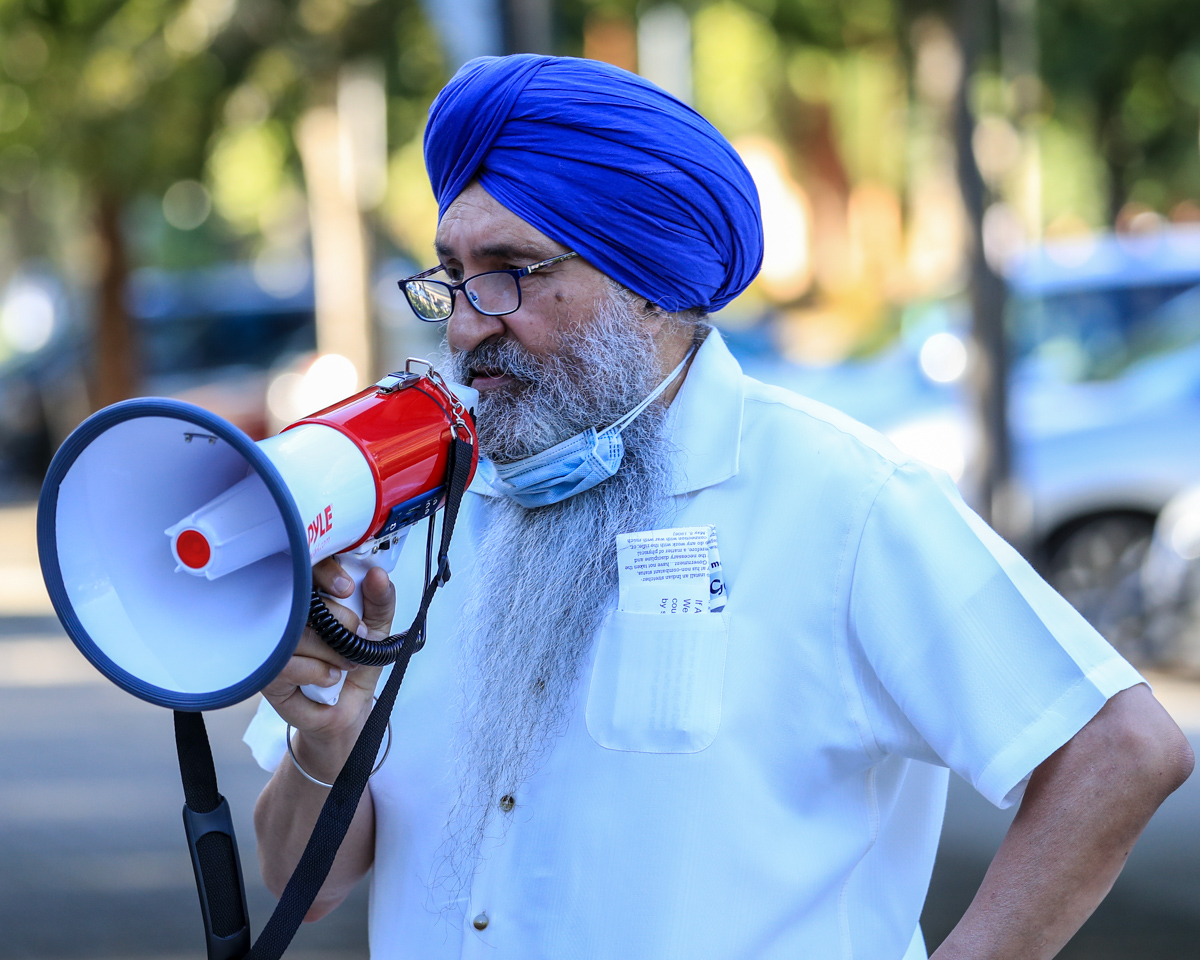 “American needs to come together, we have seen so much suffering,” one of the organizers said.  “One of the symbols that stands in this park is Mohandas Karamchand Gandhi commonly called Mahatma Gandhi.  Gandhi has never set foot in America.  Yet his statues are dawned in every city from San Francisco, Washington DC, New York, you name it.  Most prime real estate are lined with the statues of Gandhi.

“The mythological Gandhi, propagated by Hollywood and the propaganda by India, is a far cry from the actual Gandhi” he explained.

It was four years ago that an effort to bring in the statue produced multiple meetings and countless hours of debate and discussion with the Davis City Council before the majority finally approved it.

Pieter Friedrich explained in great detail the actual history of Gandhi.  He noted that all over the country, statues that represent the glorification of slaveholders “should be taken down.”  He said, “There is at least one useful thing about these statues, at least they stand for what we expect.  They symbolize what they are intended to symbolize.

But he said we “face a more complicated journey when we are confronted by statues of people who, we are told, represent the justice, quality and peace and yet actually and in fact represented the exact opposite.” 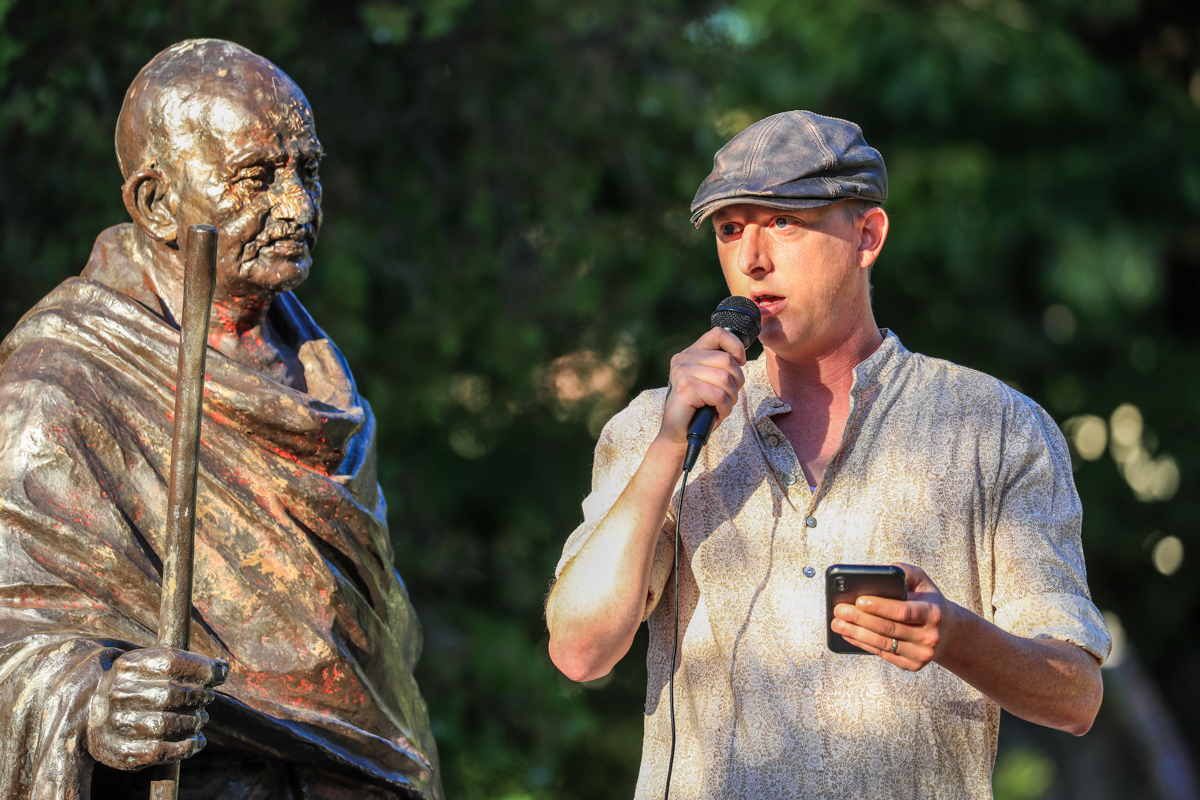 He noted that for Martin Luther King and Nelson Mandela, the basis for their non-violent resistance was based on Gandhi’s ideas and vision.

“Thus we are told the face of Black liberation from the United States to South Africa owes its various existence to Gandhi,” he said.  The 1982 film Gandhi is the vision most people in this country have of him, but he said “what is less well known is that the Indian Government funded the film”

Fredrick noted that at the same time India was funding these projects and readying to install hundreds of statues of Gandhi around the world, they were supporting genocide and ethnic violence against religious and ethnic minorities in India.

“The violent and supremacist rulers of that country today use ‘Gandhi-plomacy’ or propa-gandhi’ as a foreign policy weapon to conceal their atrocities and divert attention from their constant and most egregious violations of human rights.”

He pondered, “What if Gandhi has been able to whitewash the (Indian Government) atrocities because Gandhi himself has been whitewashed?”

Friedrich said, “The hard fact of the matter is that Gandhi was actually the champion of inequality.”  He said, “Gandhi’s anti-black racism is widely acknowledged today – although rarely closely examined and often quickly excused.” 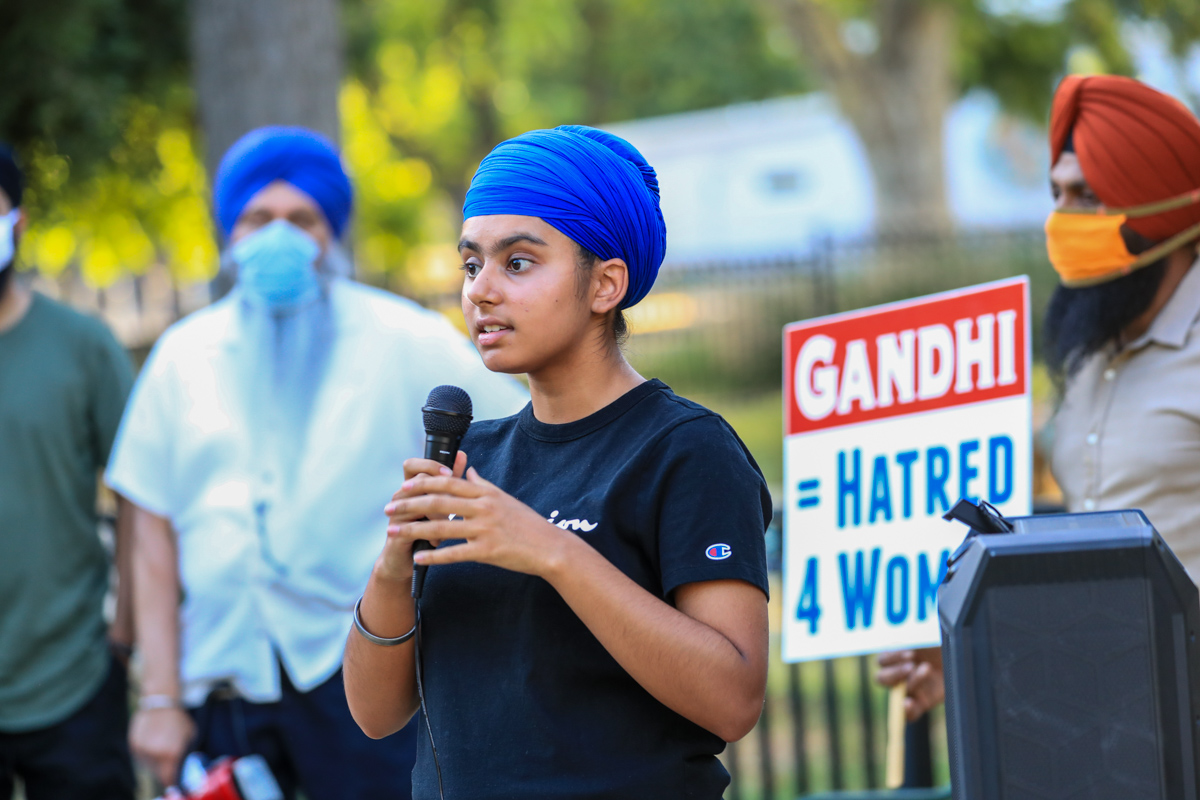 Gandhi as Friedrich explained lived in South Africa for 21 years, spending a huge portion of his professional life there, only returning to India at the age of 45.

He referred to Black Africans as “savages” and said “they are very lazy and of no use.”

Moreover, he argued, “Gandhi never changed,” saying it was not just a young and immature Gandhi who harbored these thoughts.  But Fredrick rejected this, noting this was an extremely well educated man in his thirties and forties.  Moreover, he “never acknowledged his words” and when he returned to India, he continued to push for the caste system.

He said, “Gandhi moved back to India and switched from promoting racism to promoting casteism.”

Among the other speakers was Dillan Horton, running for the Davis City Council.

He noted that his family members are the decedents of Central Texas slaves, “so Juneteenth has a deep meaning in my family.”

On the Gandhi issue, he said, “This should be an easy issue for the city of Davis.”  He said, “There is a statue right behind me of an anti-black segregationist.”  He added, “He set up multiple systems of oppression in multiple countries.” He noted, “Most people in Davis if you ask them will say that doesn’t represent my values—yet the statue is here.

“The statue has to come down, it’s the only thing that’s consistent with our values,” he said.  “Obviously we are here today because we don’t have the leadership in our city that’s given it to us.  The statue has been here for four years—when the statue was put here in the first place, it was protested by people in the community.  Protested by people all across the state.  Yet the statue is here.”

Leaders of the community have been “dismissed and rebuffed” when they have tried to have conversations about whether the statue is consistent with our community’s values has arisen.

“Obviously this is not going to change with your current city leadership,” Horton said.  He noted that the city council election will be on the ballot along with the presidential election, and he quipped, “We have a mayor right now who is the most unabashedly pro-police person on the current Davis City Council.”

He added, “He is a person who has been willing to sign a blank check to expanded policing and reduced police accountability every chance they got.”

In August of 2016, there was a long contentious council meeting on the issue of the statue.  In February that year, the council on consent voted to accept a Gandhi statue, donated from the Indian government for a placement in Central Park.

But it was then-Mayor Robb Davis and Mayor Pro Tem Brett Lee that brought the item back for consideration.

They ended up losing that vote 3-2, where Will Arnold, Lucas Frerichs and Rochelle Swanson voted to oppose reconsideration. 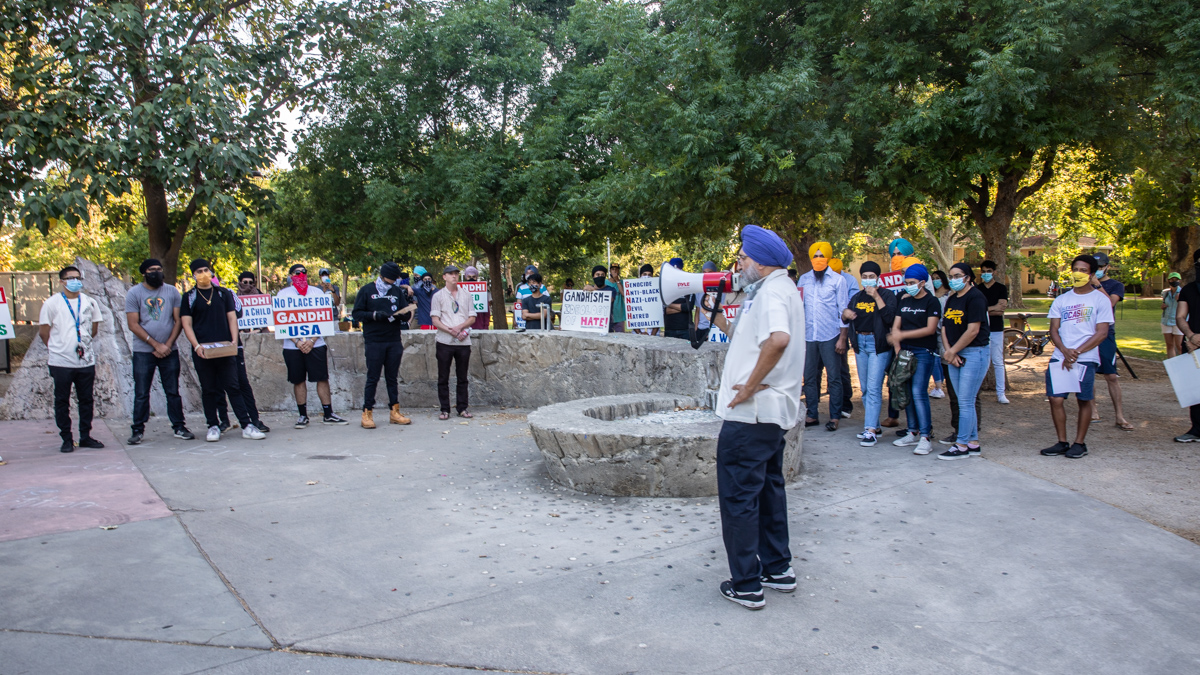 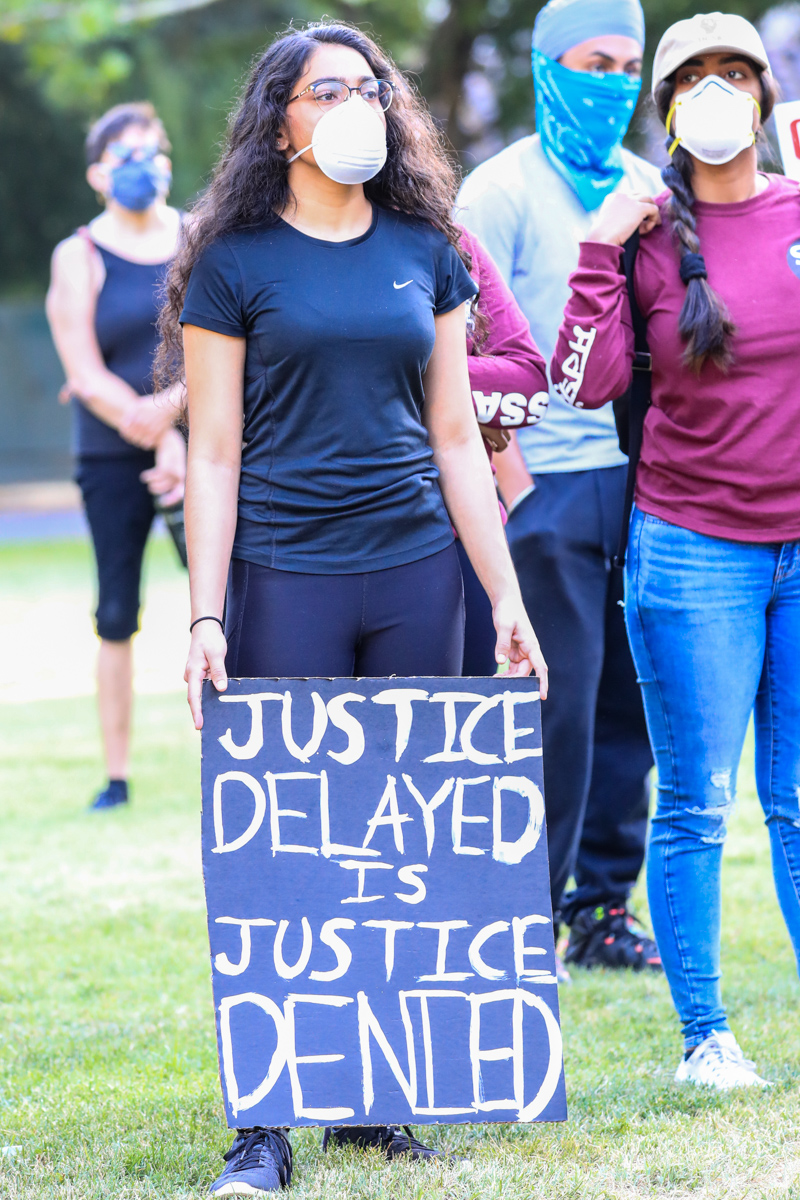 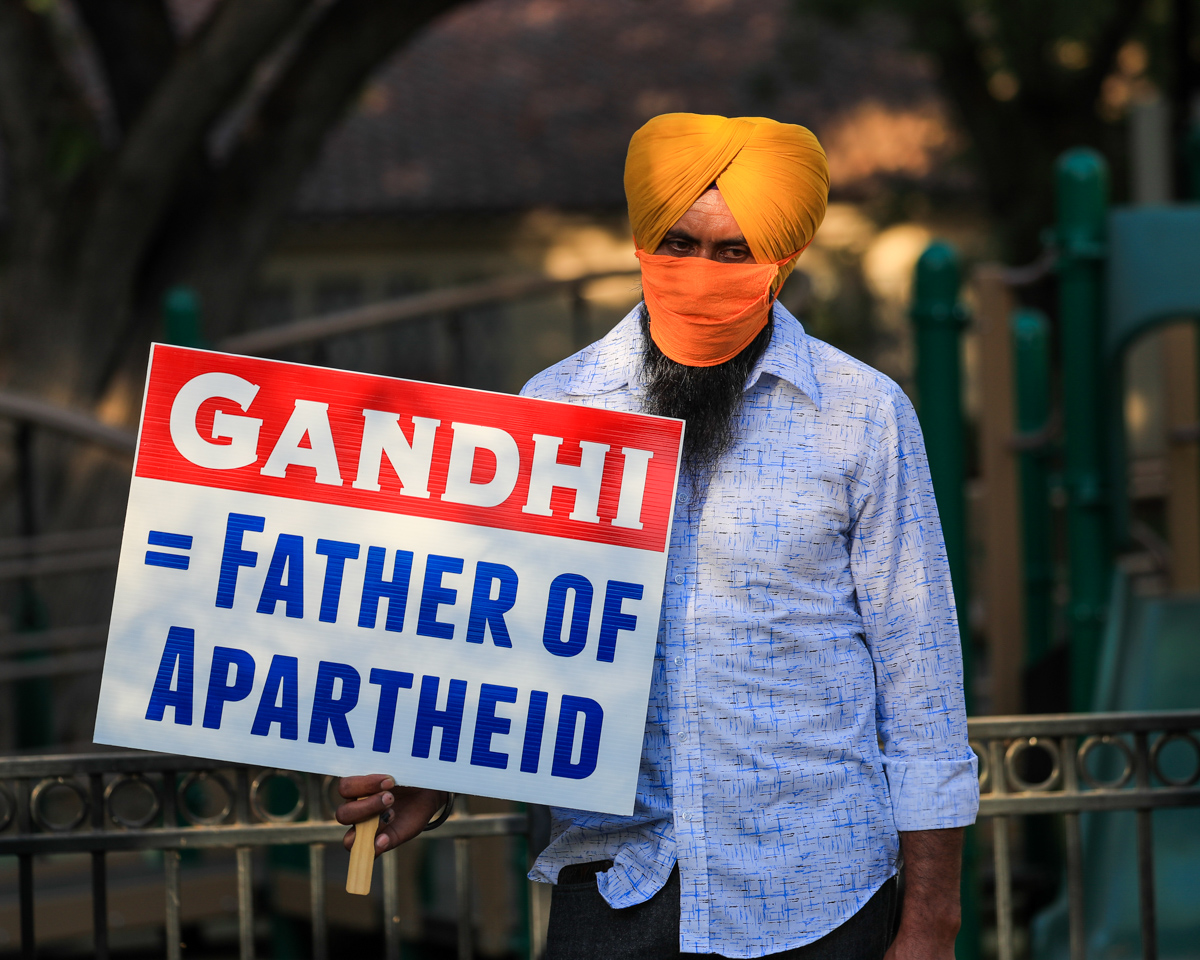 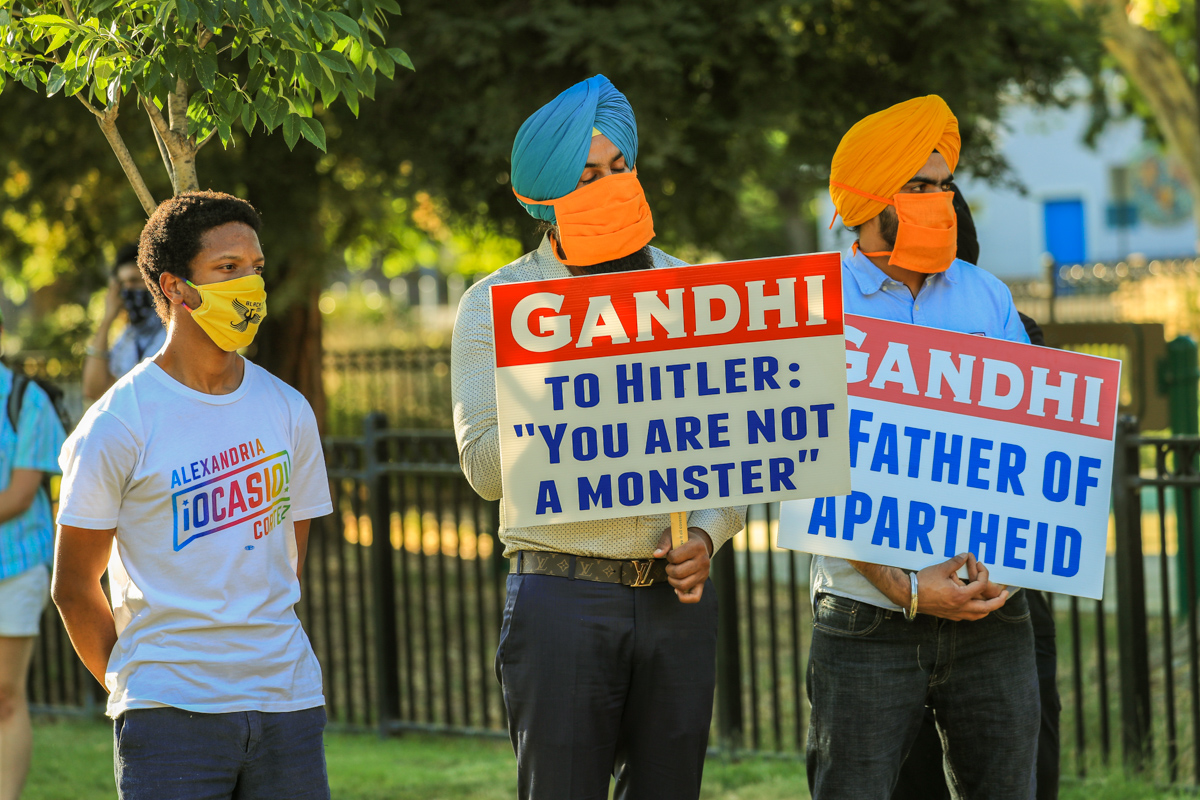