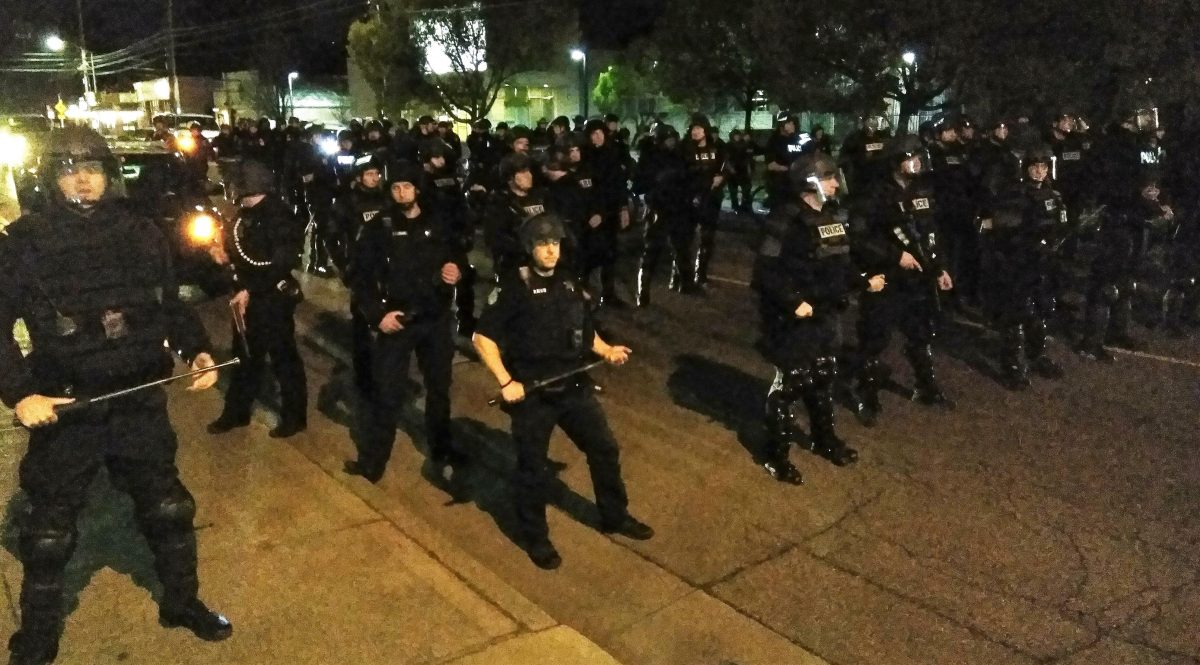 SACRAMENTO – When the Sacramento City Council approved relatively minor police reforms this past week – after massive calls to defund city police – critics of the Sacramento Police Dept. almost uniformly said it was way too little, and too late following weeks of militarized SPD firing “non-lethal” projectiles and other munition at unarmed bystanders and peaceful demonstrations with their hands up.

The police violence has led to at least one federal lawsuit – with others no doubt to come – and dozens of injured people, some very seriously, who never posed a threat to anyone, let alone officers, charge observers.

Two voices for the legal community are among the most critical of what the council did and didn’t do.

“The policy proposals from Mayor Steinberg and city officials are much delayed and hardly reform. We are dealing with officers shooting non-participant medics, journalists and legal observers in the face and they are talking about handing out business cards,” charged Elizabeth Kim, current President of the National Lawyers Guild, Sacramento Chapter.

And, prominent criminal defense lawyer Mark Reichel said, “Lawfully, non-officers cannot resort to force if someone steals their car, their identity, or assaults their family. But the police have that lawful right; the right to use force if needed. But it’s clear and flagrant abuse has been enabled by the City of Sacramento for too long.”

The city council last week did ban choke/carotid holds, not a tough call after the murder of George Floyd – an officer knelt on his neck until Floyd died –and more than a month of massive protests U.S. and worldwide.

The council approved a new Inspector General position to investigate police use of force. The IG would report to the City Manager, who is the only city official – not the mayor and not the police chief – who can fire a police officer. Mayor Darrell Steinberg almost reluctantly admitted he could allow public input on the IG hire.

And the council agreed to allow social workers, not police handle some mental health calls. But he put a $5 million price tag on the program, and said it would not start for 48 months.

NLG’s Kim echoed many of the nearly 200 calls and written comments from critics of the city council.

“City officials are continuing to act in bad faith and doing what they always do- which is to throw a band aid on a festering wound that is bleeding out of control. The mayor has avoided requests for meetings from community leaders for weeks and one councilman proposed a press conference requesting community leaders and students to accommodate his schedule just to cancel the whole thing altogether,” said Kim.

Councilmember Allen Warren reportedly had a plan – but it was only to have officers distribute “How am I doing” cards to the public.

Steinberg told the press that, “It’s never too early to make change but it’s also never too late…What we are presenting here tonight is the beginning of systemic reform,” he promised.

But it appeared to fall on deaf ears. Critics, after watching police kill or injure people of color – including the unarmed Stephon Clark incident two years ago – feel it already way “too late” to make change. They want change yesterday and don’t support the mayor’s claim that “it’s also never too late.”

“Real change comes from first and foremost, each and every one of the electeds sitting on that council to acknowledge the atrocious policies that continue to allow law enforcement to use ‘non-lethal’ force that is actually very lethal and even banned by the United Nations,” said Kim, who was targeted, she said, by police fire when she was monitoring protests for the NLG.

Her NLG associate, Danny Garza, was positioned away from the action, and clearly identified as a NLG legal observer with a bright green hat. The military veteran was hit one inch above his left eye, and hospitalized with a concussion and other injuries. He’s now suing the city and asked the officer responsible be arrested and prosecuted.

Reichel, a longtime hardnosed defense attorney, noted that “For so long in Sacramento City, the economically disadvantaged communities, and communities of color, have had to watch almost helplessly as those with a complete monopoly on the legal use of force have abused that monopoly, have bragged about their monopoly, which has engendered a resentment and pent up anger in those communities.”

“These recent changes are a start, a thin wedge which will hopefully lead to a broader wedge, which will then someday open up a new day of respect for whatever type of law enforcers the people choose to select. It’s a start in the right direction. It’s long, long overdue,” he said.

Kim suggested the city “amend their use of force policies to be compliant with the Geneva Convention and cease and desist use of force on protestors and non-participants effective immediately, noting that the council didn’t make any substantial changes in use of so-called “non-lethal force” policy.

“The city council needs to consult with the community leaders already on the ground doing this work to gain perspectives on their proposals so that they aren’t completely tone-deaf to the concerns in the communities they represent. They need to prove that they value human rights over property interests. Until we see that, there will never be trust between the city council and the constituents they serve. Enough is enough,” added Kim.

“This does not heal the wounds over the past 400 years…it’s nothing more than what is in state law. It does attempt to reduce lethal encounters,” citing the chokehold ban, prohibiting no knock warrant for drug busts and more lethal force training. Carr said the policy changes are “not worth the paper it’s printed on.”

Councilperson-elect Katie Valenzuela, who takes office in December, tweeted: “Sacramento – you’re right to be frustrated. You deserve to be heard, to have greater influence. Our City is trying to solve this without your input. They’re missing the opportunity to dialogue, learn and do SO much better. But we can’t afford to stop. Keep pushing.”

And councilmember Warren, facing a strong election challenge in November, said he wants officers placed on unpaid leave if they use force on “unarmed and non-threatening” people.

Councilmember Jeff Harris did comment that “I don’t think the council needs to hear every use of force incident” that was sure to not be welcomed by the critics of police.

The council heard a long awaited report from the Police Citizens Review Commission, which has said it’s tried for years to get the attention of the council about community concerns over police but to little or no avail.

Among the recommendations of the 11-member citizen commission, as presented by chair Mario Guerrero, are drugs and alcohol testing of police officers after use of force incidents.

“We believe the commission has done a lot of work and has not been taken seriously,” Guerrero said. Community members have long sought a commission with more teeth than the current on – one that could investigate if not recommend discipline to errant police officers.

Among the recommendations by the current commission, which it descried as “meaningful, structural reforms,” are to require all use of force incidents be reported and the public informed, that officers be trained that “their fear alone” is not imminent threat, that officer use be de-escalation be stressed, and that officers “exhaust all alternatives before any force is used.

“It would have to be a last resort to use force,” said Guerrero.

Other recommendations include requiring a warning shot before shooting, retreating before engaging if possible, a duty to provide medical assistance and police adopting a “guardian mentality or mindset” rather one that considers residents enemies.

Guerrero also said the commission would like to see an “increase of police officers that reflect the communities they serve,” in racial makeup and a training requirement that officers take a college level course on ethnic studies.