Oakland – Veteran Civil Rights Attorney John Burris, who has represented such high profile police incidents as the beating of Rodney King and the killing of Oscar Grant, calls the shooting death of Erik Salgado and his unborn child the most “murderous” shooting by police he has seen.

The incident took place on June 2, 2020, in broad daylight when CHP officers who remain unidentified by authorities, part of an auto theft task force, opened fire on a red Dodge that had been reported stolen and which they were attempting to stop in their unmarked vehicles.

The CHP fired at least 40 gunshots at the vehicle at a time when Mr. Burris contends that “no officer or civilian was in any danger,” nor does he believe that they had “reason to believe anyone inside the vehicle was armed with any weapon.”

He contends, “Even the theft of the vehicle, for which the occupants of the vehicles were not suspected of, did not occur by means of violence.”

Salgado, 23 at the time of his death, would have turned 24 on Monday. He was shot 18 times and was dead at the scene. His girlfriend was four months pregnant with Salgado’s child and in the passenger seat. She was shot three times, including in the abdomen and the unborn child died as a consequence.

The CHP “gave no warning they would shoot before they opened fire, intentionally positioned themselves at angles around the red Dodge where they would not shoot each other, and fired away over an extended period of time, executing (Salgado) and severely injuring (the girlfriend).

It is currently being criminally investigated by the Alameda County District Attorney’s Office, as well as the Oakland Police Department. 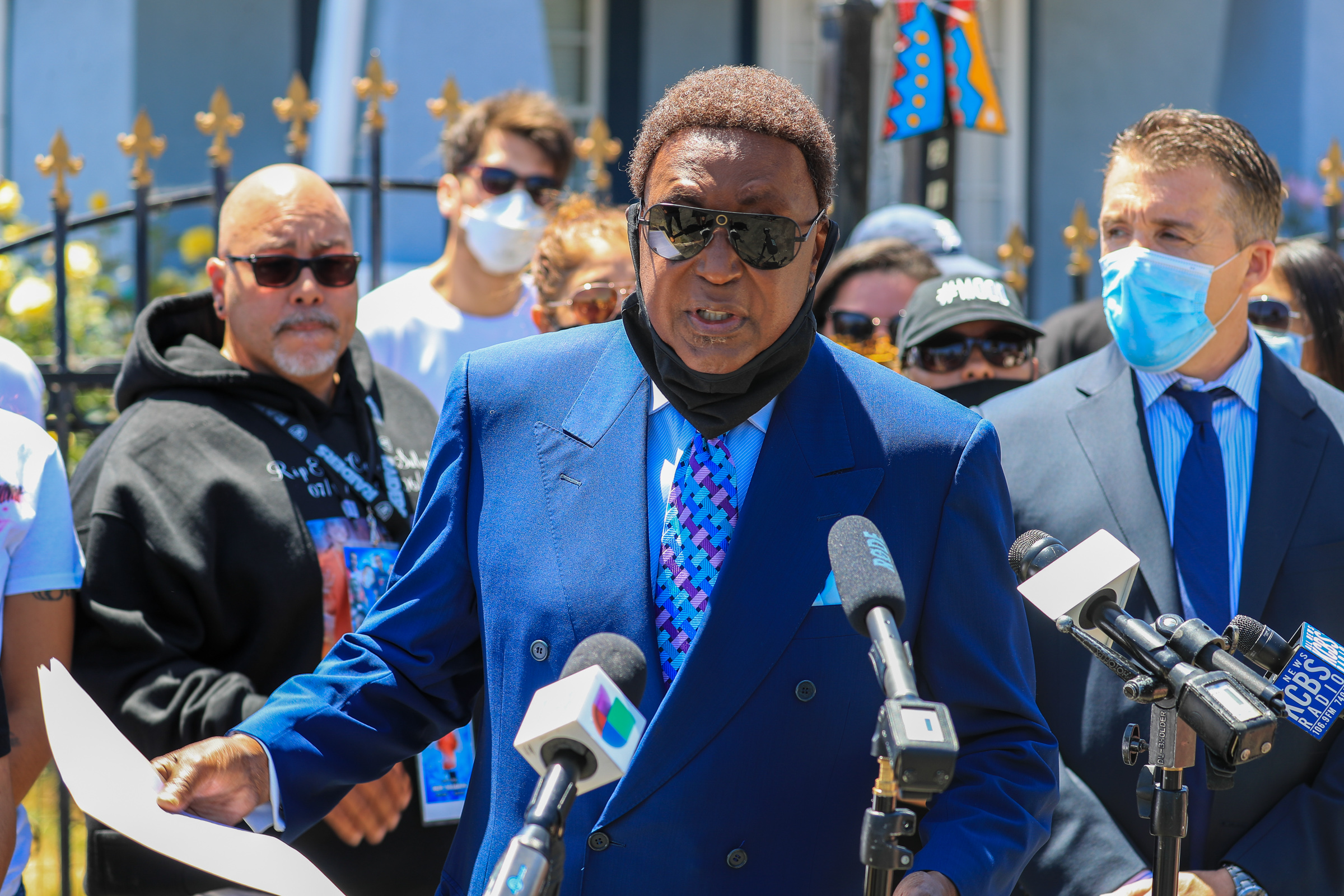 “This is a particularly egregious, a particularly atrocious and callous and wanton reckless disregard for the lives of Erik and Brianna, and the community itself,” John Burris said on Monday at a press conference in Oakland at the scene of the shooting.

He said that members of the community were all out of their cars and in a position of safety before the CHP shot their weapons.

“The number of shots fired was enough in my view to show a malicious character on the part of the CHP officers,” he said. “It was a massacre.

“It was a complete overkill for the kind of case that was involved,” he said. Even if they stole this vehicle, “there was nothing about what happened that they were doing that justified the use of force.

“Each of those officers were in a position of safety at the time they fired,” he continued. “They gave no warning telling them if they didn’t stop, or if they moved, they would be killed.”

He noted there was no weapon found and no weapon displayed at any time.

“The officers had no regard for their lives,” he said. “It may have been that they felt the need to be so aggressive because there was an issue of looting, and stolen cars had been taken before.”

But Burris said, “That’s not a justification for the use of the kind of force, and taking the lives of Erik Salgado.” 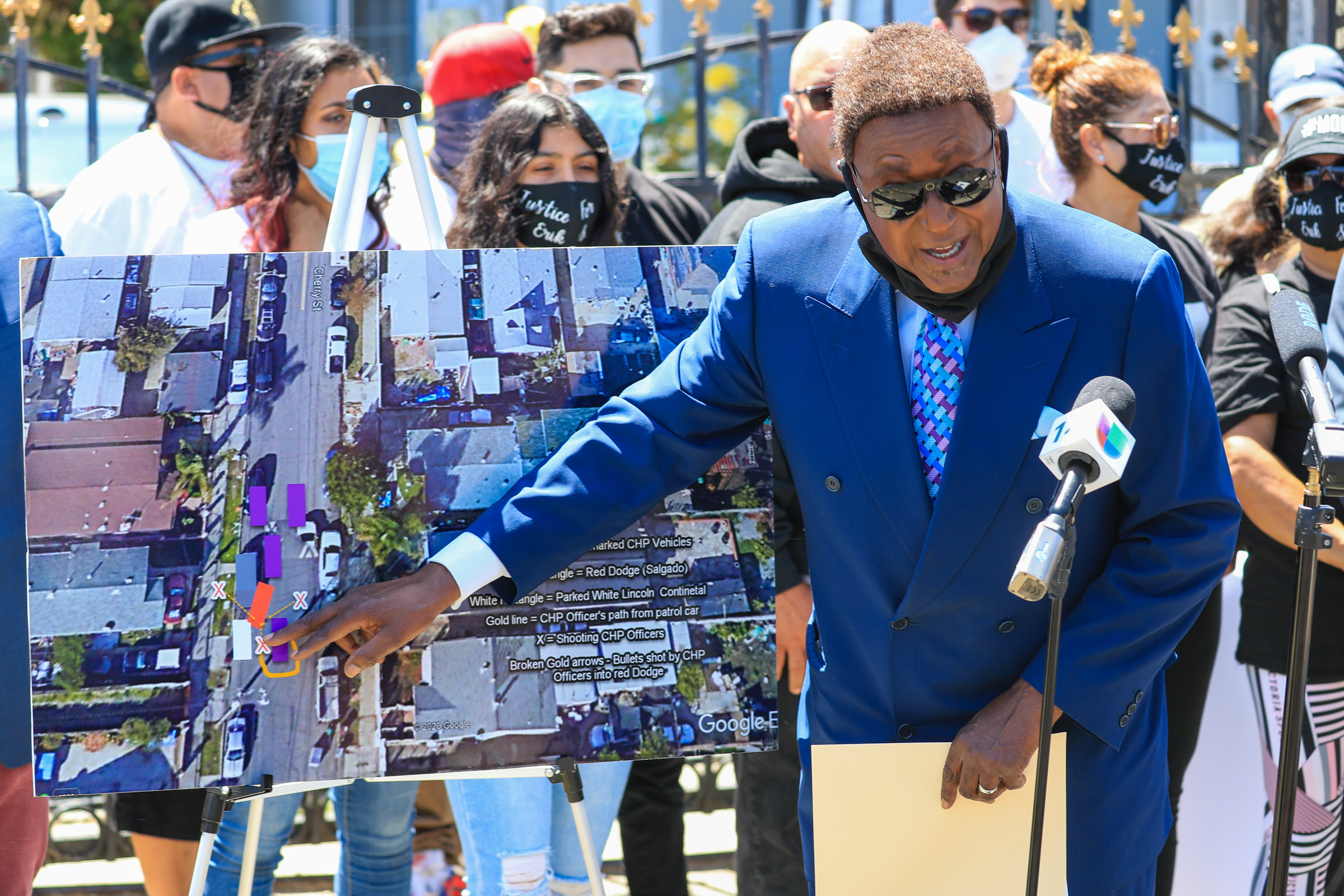 Burris acknowledged he may have attempted to maneuver the vehicle out of there.

“But he didn’t smash them in ways that jeopardized anyone’s life, because all of the officers were out of the car,” Burris explained. “Their lives were no in danger.”

“None of these officers received any information directing their fire or a deadly weapon or anything directed at them,” he said. “It’s hard to justify anything other than murder here.

“Forty different shots were fired,” he said. One them from an AR-15 assault rifle. “For the life of us we cannot understand why you are looking for stolen cars in a residential community and you have assault weapons.

“You don’t know where those bullets are going to go,” he said. The car went out of control and hit the side of the other car. “That is the real danger of shooting into a car that’s slightly moving.” 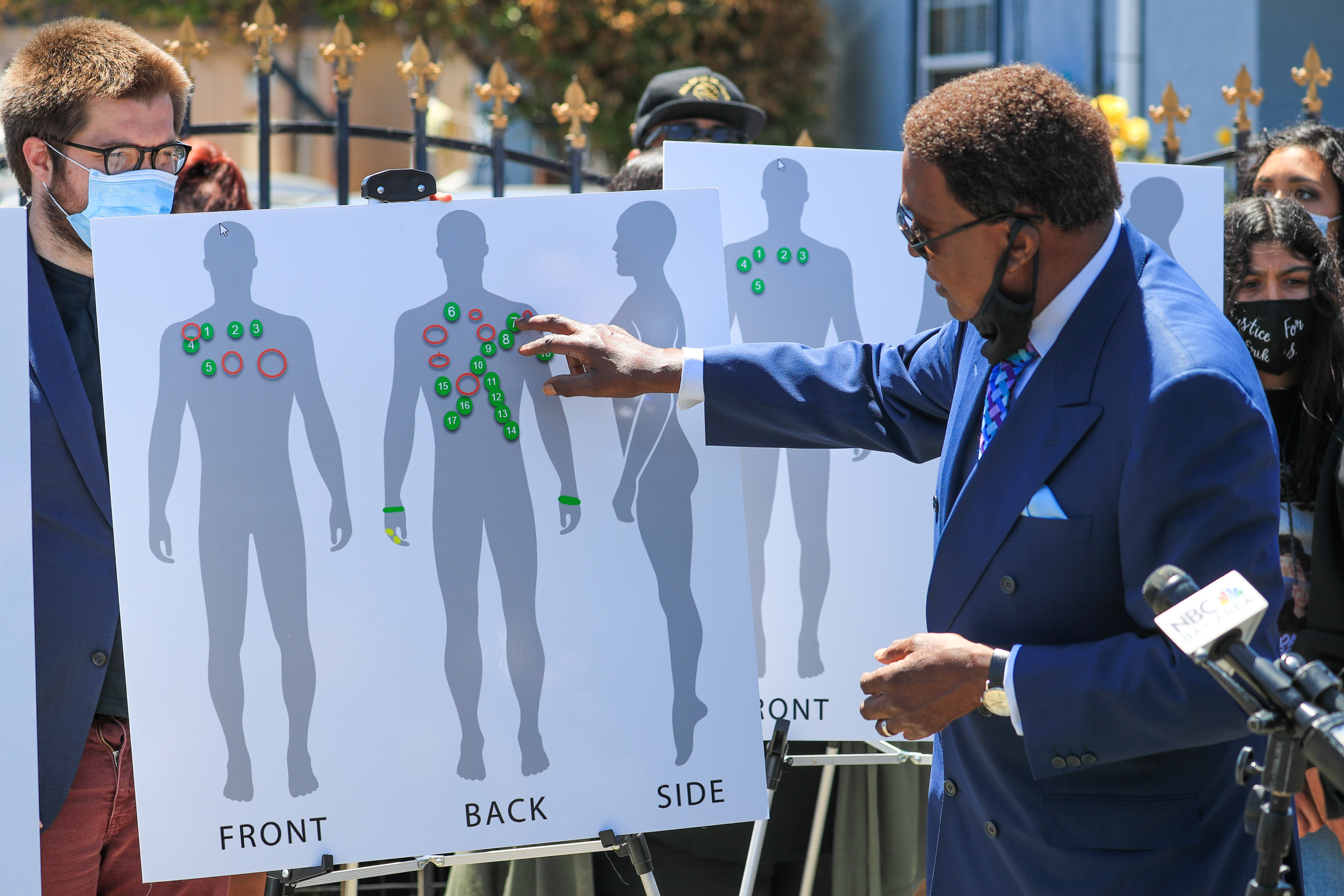 John Burris explained that he personally had the opportunity to examine the body itself. They counted out each and every entry and exit wound that was in the body.

The green, he explained, are the entry wounds. Most of those are in the back.

“He’s shooting from the back, the officer was not in danger,” Burris said. “He shoots a massive number of shots into his back.”

There are 18 entry wounds—five in the front, 13 in the back.

“This is outrageous, I have never seen a body been torn apart by this over a car,” he sad. “These guys were sitting ducks, they were frankly just massacred.”

“It’s unexplainable as to how the officers in this community could have such disrespect… for shooting such high powered weapons,” he said. “They were sending a message to this community that this is what could happen to you. This is CHP—who really should not be using this level of force looking for stolen vehicles.” 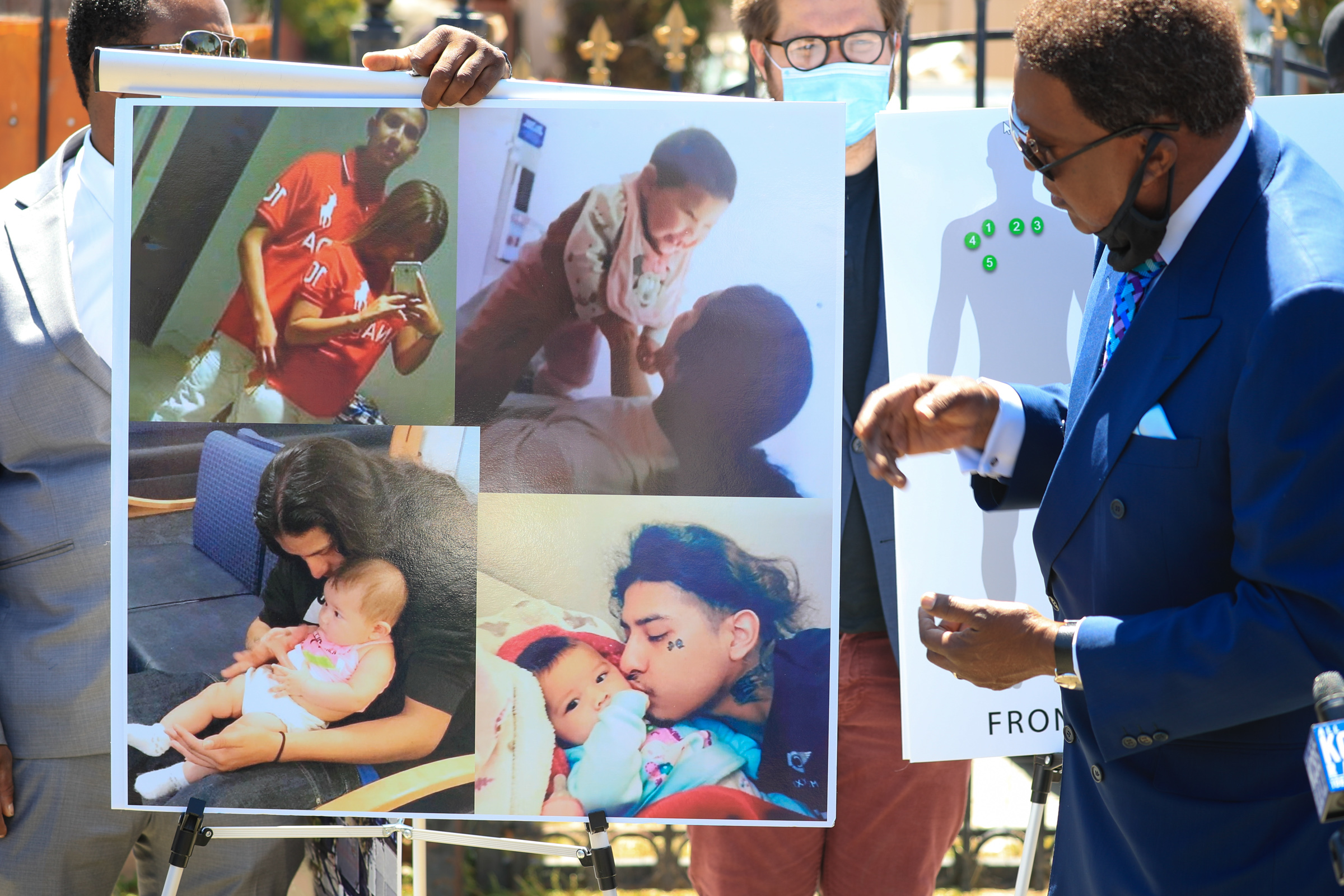 “Erik was a real human being,” Burris pointed out. “He may have had his troubles as he was trying to find his way as a young person. He had a small child—three years.” He said, “They were young people trying to find their way. They were working at it. But they didn’t get a chance because it was taken from him.”

Burris noted that while he has filed many lawsuits over the years and represented over 1000 clients, “I don’t know that I’ve ever filed a lawsuit with such a callous reckless disregard for a person’s life, with multiple shots at someone who was unarmed. This wasn’t a shootout.”

No one was returning fire,” he said.

He also pointed out the difficulty they have had getting materials from authorities. 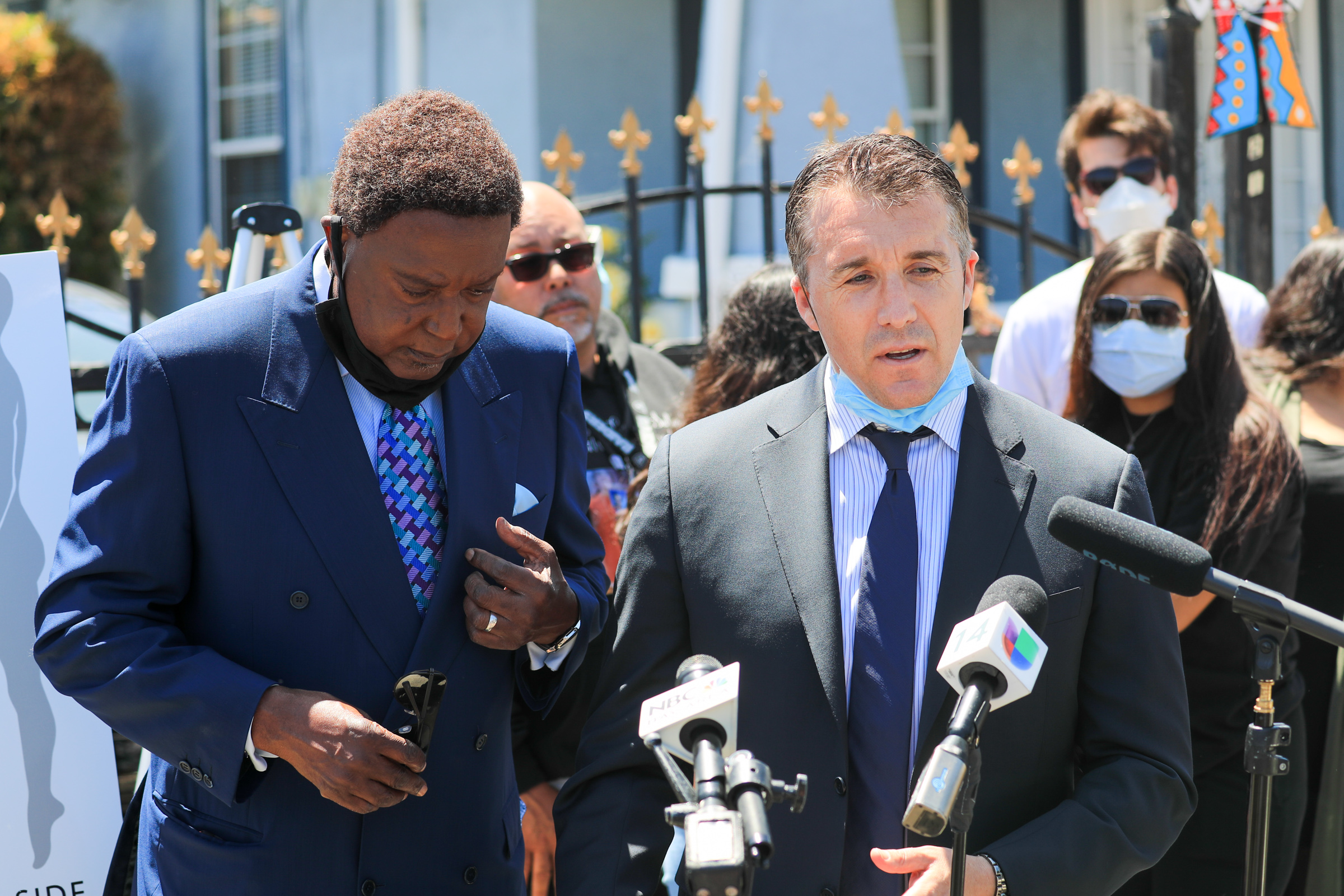 They argue that the defendants “acting under color of law, and without due process of law deprived Plaintiffs of their right to a familial relationship with Decedent by use of unreasonable, unjustified deadly force and violence, causing injuries which resulted in decedent’s death, all without provocation, in violation of the Fourteenth Amendment to the United States Constitution.” 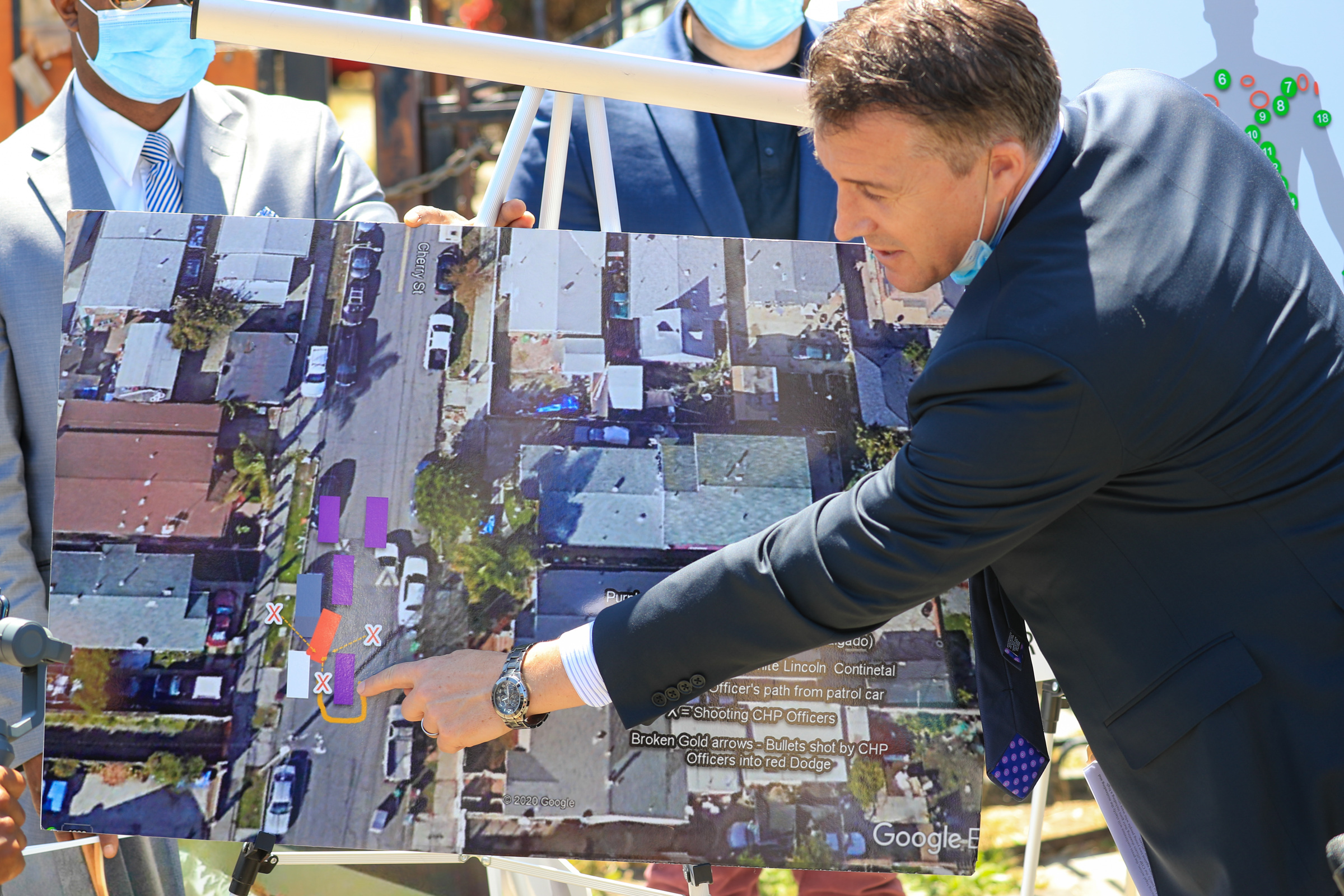 Nisenbaum called this act criminal—“you can’t run in front of a car” and then use that as justification to then shoot.

He argued that the officer got out of his car “and places himself directly in front of his car.”

He argued that “if you can do that, there’s something else you can do—back out of the way.”

Nisenbaum also said “there is an element that this appears to be premeditated.” He argued, “They positioned themselves in positions where they would not hit each other with their own crossfire.”

He said, “It is conscience-shocking, it is criminal and these officers should be prosecuted, they should be indicted.” 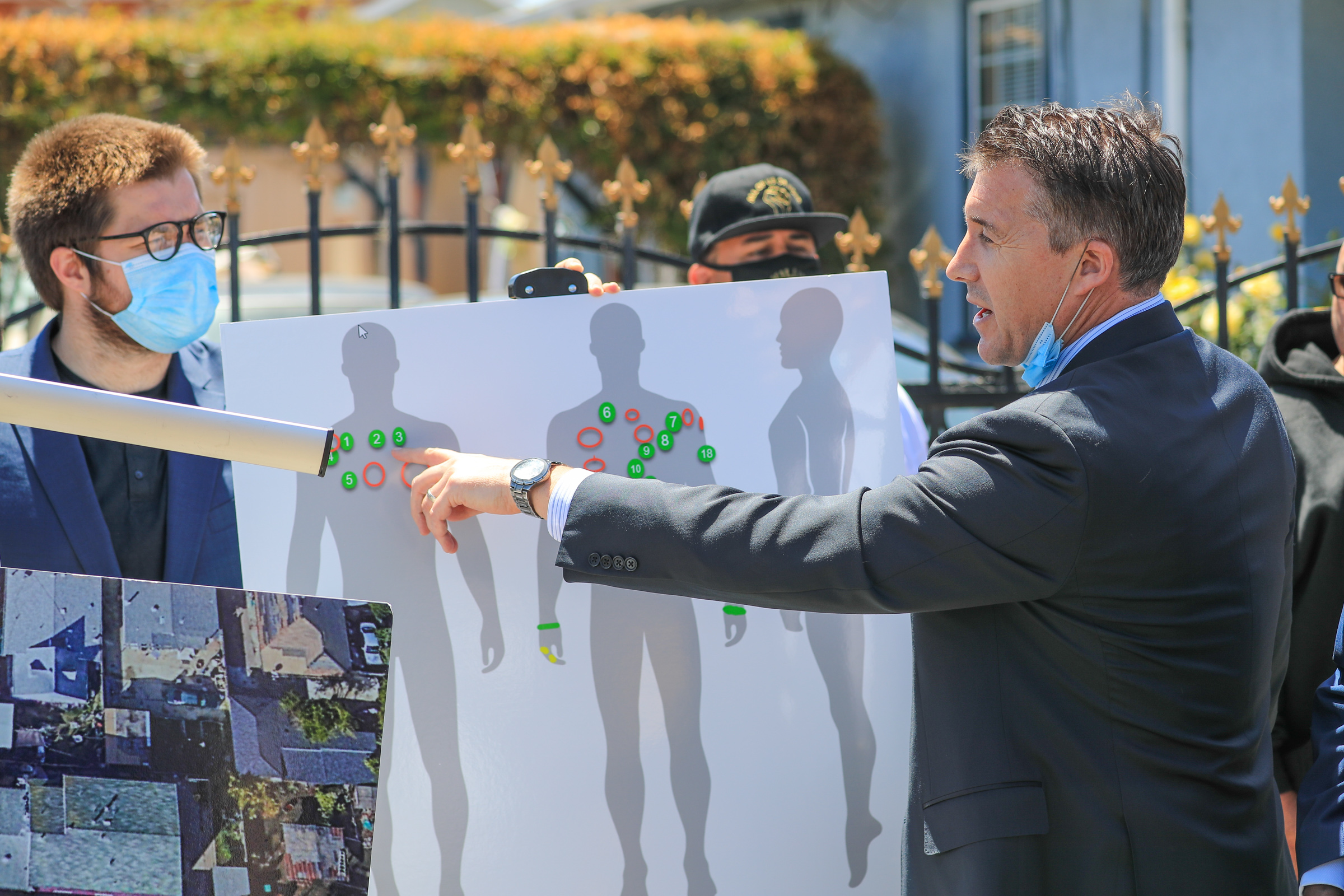 Finally he noted that if you look at the shots on Salgado, “these aren’t panic shots. This is deliberate targeting.”

“There is a cluster of shots in the chest,” he said. “That is a deliberate targeting. It does not indicate panic. It does not look like he was trying to get out of the way.”

He called it “comply or die.” Basically, “do what we tell you to do or we will kill you, even if we don’t have to. That’s a crime in this country.”

Burris added that Salgado didn’t even have a chance to comply. “As soon as he turned off the engine, they started firing,” he said. 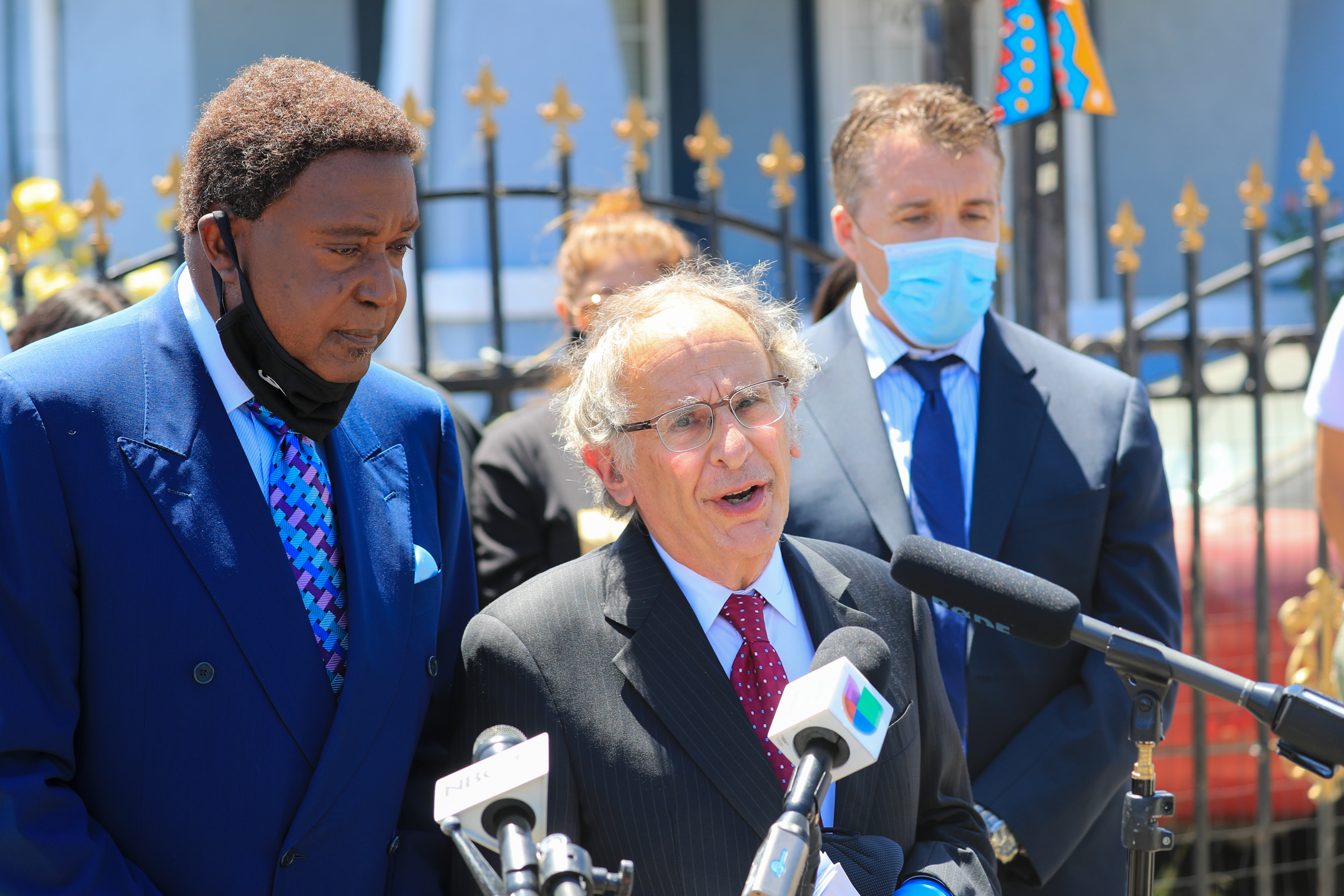 Attorney Jim Chanin talked about the fact that the CHP is violating the law by refusing to disclose the names of the officers.

“Despite our requests,” he said. “They have said absolutely no.”

He cited a California Supreme Court case from 2014, which he said “is exactly on point.”

They ruled, ‘When it comes to the disclosure of a police officer’s name, the public’s substantial interest in the conduct of its police officers outweighs in most cases the officer’s personal privacy interests.”

He also cited SB 1421, where “the public has a right to know about serious police misconduct as well as officer involved shootings…”

Chanin also questioned claims that there was no video—“why is there no video?” he asked.

Burris concluded, “This is one case where prosecution is clearly evident. There’s no justification at all for the level of force that was used.”

He added, “The number of shots fired by the officers was enough to kill a militia of terrorists. It was a massacre! Complete overkill for the potential crime. These officers’ use of high power assault weapons demonstrates a total lack of regard for Erik and Brianna’s lives and for the lives of neighborhood residents, composed of largely working-class Latinos.”