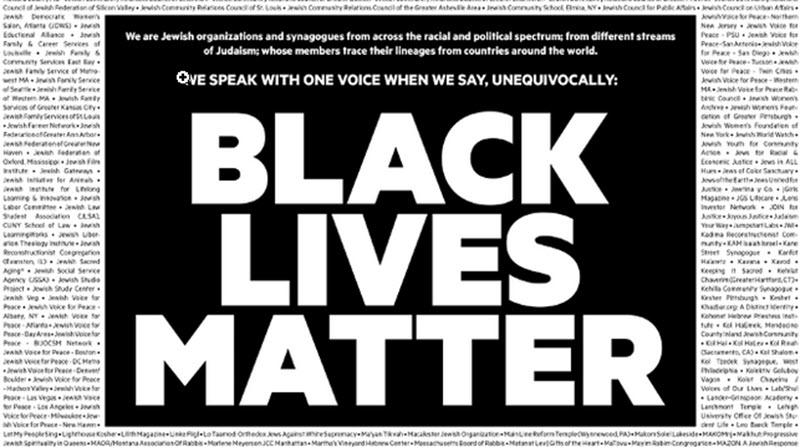 In a powerful message, a joint letter was signed by over 600 multiracial Jewish denominations, organizations, and synagogues, representing over half of all Jewish people in America.

Text of the letter:

We are Jewish organizations and synagogues from across the racial and political spectrum; from different streams of Judaism; whose members trace their lineage from countries around the world.

We speak with one voice when we say, unequivocally: Black Lives Matter.

We support the Black-led movement in this country that is calling for accountability and transparency from the government and law enforcement. We know that freedom and safety for any of us depends on the freedom and safety of all of us.

There are politicians and political movements in this country who build power by deliberately manufacturing fear to divide us against each other. All too often,

antisemitism is at the center of these manufactured divisions.

There is a long history to these attempts: during the Southern Freedom Movement of the 1950s and 1960s, conspiracy theories were used by white supremacists attempting to delegitimize the extraordinary organizing of Black activists. Billboards were erected smearing Dr. Martin Luther King, Jr. as a communist, signs and flyers claiming that “communist Jews” were masterminding the civil rights movement were common, and pro-segregation organizations like the John Birch Society popularized these lies.

Black Lives Matter, the recent uprisings across the globe in the wake of the murders of Breonna Taylor, Ahmaud Arbery, George Floyd, Rayshard Brooks, and so many others, and the decades of political organizing across the country that have led to this moment are movements led by and for Black people. We see through any attempt to suggest otherwise by pointing fingers, scapegoating, or using antisemitic dogwhistles.

As Jews, we know how dangerous this is: when politicians target Jewish people and blame us for problems, it leads directly to violence against us. When Black movements are undermined, it leads to more violence against Black people, including Black Jews.

Antisemitism is part of the same machinery those politicians use to blame Black and brown people, people who are immigrants, people who are Muslim, and more. But whether they generate division and fear based on our religion, our skin color, or how long we’ve been here, their goal is to keep us from working together to win the things we all need to survive and thrive.

When Jewish people join together with our neighbors across racial and religious differences, as we have in the past, we can protect each other and build the future of freedom and safety we all deserve.

Jewish tradition teaches us that justice is not something that will be bestowed upon us, it is something that we need to pursue, and that the pursuit is itself sacred work. We’ll show up for each other every time one of us is targeted because of our differences, and reject any effort to use fear to divide us against each other.

The Black Lives Matter movement is the current day Civil Rights movement in this country, and it is our best chance at equity and justice. By supporting this movement, we can build a country that fulfills the promise of freedom, unity, and safety for all of us, no exceptions.

Click here to see the signers of the letter. 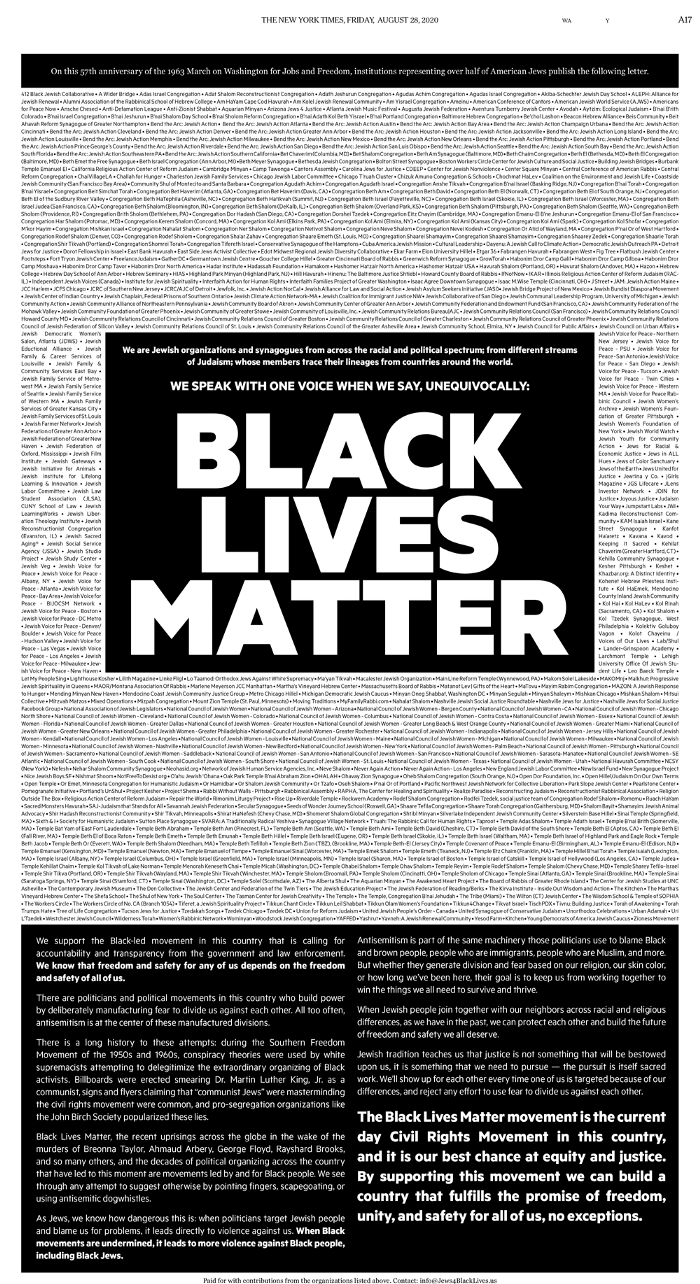