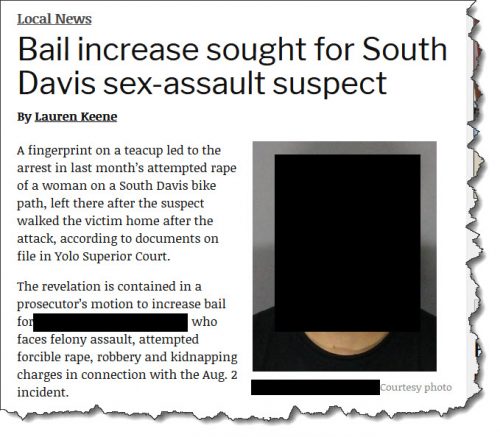 The story featured prominently on page one of the newspaper: “Bail increase sought for South Davis sex-assault suspect.”  In addition to the story, a mugshot of the suspect.

The man is accused of attempting to rape a woman on a South Davis bike path last month—an alarming crime to be sure.  And there is—at least on the surface—solid evidence in the form of a fingerprint.  But the Davis Enterprise is behind the times here, as most papers across the country have stopped running mugshots.

The Tampa Bay Times announced in June that they will no longer publish mugshot galleries of the recently arrested, amid concerns they “disproportionately show black and brown faces.”  The paper said it will still publish mug shots relevant to particular stories, but not in its gallery format.

“The galleries lack context and further negative stereotypes,” Tampa Bay Times executive editor Mark Katches said in a statement.  “We think the data is an important resource that our newsroom will continue to analyze and watch carefully, but the galleries alone serve little journalistic purpose.”

In July, the Sacramento Bee went further, announcing “it will limit the publication of police booking photos, surveillance photos and videos of alleged crimes, and composite sketches of suspects provided by law enforcement agencies.”

The paper wrote: “Publishing these photographs and videos disproportionately harms people of color and those with mental illness, while also perpetuating stereotypes about who commits crime in our community.”

”The Bee has taken several recent steps to work against long-standing stereotypes. We have largely banned the use of the word ‘looting’ – a term rooted in racism – and have sought to elevate the voices of emerging writers from communities we have long underserved through our Community Voices project,” said Bee President and Editor Lauren Gustus. “And building trust takes time. Our intention with this policy change is to take another step forward.”

Most mainstream media outlets have published police booking photos, known as “mugshots,” for decades.  The photos are generally provided by law enforcement when they arrest or charge suspects.

But, as the Bee noted, “Their publication can have a permanent damaging effect on individuals and communities.”

The problem of course is that these represent arrests and suspicion.  The individual may be released.  They may have their charges dropped.  They may be acquitted.  They may plead to lesser charges.

“Yet the mugshot of that person in police custody remains,” the Bee wrote.

This is part of a growing trend.  In July as well, “The San Francisco Police Department said it would no longer release mug shots because they reinforce racial biases, joining a growing movement by newspapers and broadcasters to curtail their use.”

Chief William Scott announced in July that his department will no longer even release mug shots, and “there was an immediate public safety reason to do so.

“This policy emerges from compelling research suggesting that the widespread publication of police booking photos in the news and on social media creates an illusory correlation for viewers that fosters racial bias and vastly overstates the propensity of Black and brown men to engage in criminal behavior,” Chief Scott said in a statement.

Back in February, even before the racial consciousness triggered by the death of George Floyd, the Marshall Project reported, “Newsrooms Rethink a Crime Reporting Staple: The Mugshot.”

The Marshall Project cited the “lasting impact of putting these photos on the internet, where they live forever, (and) media outlets are increasingly doing away with the galleries of people on the worst days of their lives.”

“Mugshot slideshows whose primary purpose is to generate page views will no longer appear on our websites,” Mark Lorando, a managing editor at the Houston Chronicle, explained in an email to the Marshall Project. “We’re better than that.”

“Thank you, @HoustonChron for doing the right thing,” tweeted Jason Spencer, spokesman for the Harris County Sheriff’s Office. “I’m hopeful that other media outlets and law enforcement agencies will follow your lead and rethink the practice of publicly shaming arrested people who haven’t been convicted of a crime.”

The Marshall Project noted, “Some news organizations—including The Marshall Project—avoid mugshots altogether. The New Haven Independent, a nonprofit news site in Connecticut, doesn’t typically use images or even names of people who’ve been arrested.”

Johnny Perez, a formerly incarcerated New Yorker who is currently director of U.S. prison programs for the National Religious Campaign Against Torture, told the Marshall Project, “It reaffirms existing biased and creates biases where none exist.  People of color are already more likely to be found guilty than their white counterparts.

“It creates this situation where you’re criminalizing folks before they’re convicted of any crime,” he said, noting that the existence of mugshots on the internet, where they’re easily searchable, can make it hard for people to get jobs.

That’s the key here—arrest doesn’t equate to having committed a crime.  But the photos are often up permanently and make it hard for people whether or not they have committed the crime to escape their past.  They play into stereotypes.  And for the most part they serve a limited purpose.

When they do serve a public safety purpose, editors and journalists can decide on a case by case basis whether to publish the photos.

In the meantime, it is time for the local paper to catch up to the times with the rest of the country—especially in a progressive community like Davis.

30 thoughts on “Monday Morning Thoughts: Newspapers All Over Country Have Stopped Running Mugshots, Not the Enterprise”