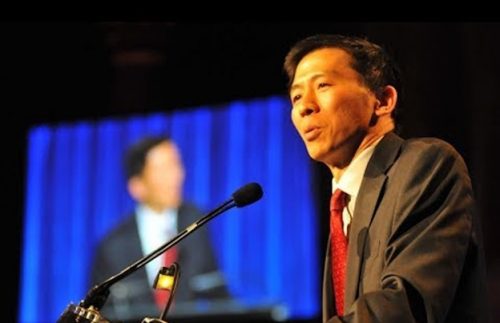 In addition, the list features over a dozen current or former CEOs or heads of major companies and nonprofits, as well as the chief legal officers of several leading businesses. Signatories also include 13 past presidents of the National Asian Pacific American Bar Association and bar association leaders across California.

“This letter shows the breadth and depth of admiration for Justice Liu within the Asian American community in California and across the nation,” said Paul Grewal, chief legal officer of Coinbase and former U.S. Magistrate Judge. “Leaders from every sector who value excellence and public service agree that Justice Liu is the best person to serve as California’s top lawyer.”

“Justice Ruth Bader Ginsburg once said that Goodwin Liu was ‘one of the best law clerks she ever had.’ I can see why: he is the closest thing there is to a rock star in the legal community,” said Freida Lee Mock, director of the documentary film RUTH: Justice Ginsburg in Her Own Words, which features Justice Liu.

“I am proud to endorse Justice Liu for Attorney General because he will be guided by a commitment to inclusion and equal justice under the law. Having grown up in an immigrant family, he personally understands the challenges that so many Californians face,” said Hmong community leader Pao Yang, president and CEO of the Fresno Center.

“On and off the bench, Justice Liu has distinguished himself as a leading voice for racial justice and inclusion in the legal profession and beyond,” said Mia Yamamoto, LGBTQ+ rights advocate and co-founder of the Multi-Cultural Bar Alliance of Southern California. “Asian Americans too often remain an invisible minority. Justice Liu’s pathbreaking 2017 study on Asian Americans in the legal profession enabled our community’s accomplishments to be celebrated and our challenges to be addressed.”

These Asian American leaders call on Governor Newsom to “break the mold and do what is best for California.” Their letter states that “Justice Liu’s national reputation and exceptional knowledge of the law distinguish him from other candidates for Attorney General.” The letter also notes that Justice Liu is not a politician seeking “a springboard for political advancement” but rather “a different kind of candidate” who will bring “focused and genuine dedication” to the role. At the same time, the over 160 signatories affirm that they “are among the legions of supporters ready to mobilize and ensure that Justice Liu wins election as Attorney General in 2022.” 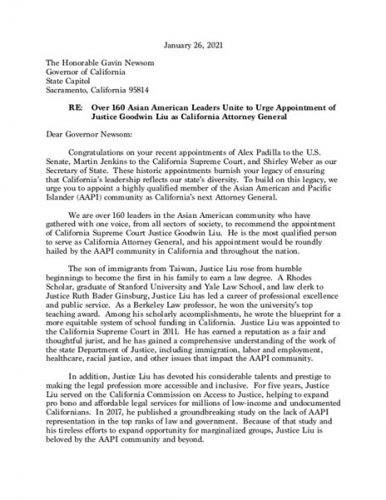 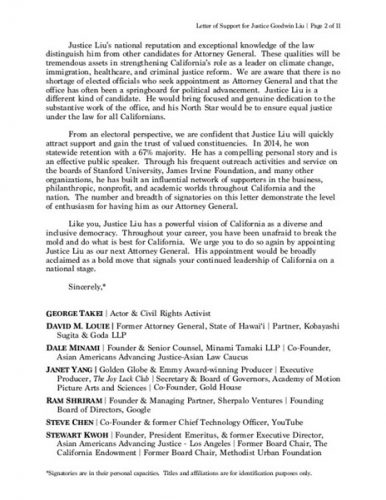