Elizabeth*’s husband is a patient at California Medical Facility (CMF). She is intimately connected with the experiences of patients through her support network, which she shared with us in an interview.

Currently, CMF is utilizing their “D dorm” to segregate COVID-positive patients from the general population. Prior to the pandemic, this dorm was used to house dogs that incarcerated people would train through the Paws in Prison program.

She says, “When Covid hit, the dog program was suspended, the dogs sent home with staff and D dorm was turned into the quarantine dorm. Reports from inside are that the dorm was never cleaned the proper way, is filthy and not fit to house patients.”

Further, those who requested cleaning supplies to sanitize the area themselves, were turned down.

Regarding medical care, Elizabeth says the nurses’ callous behavior is shocking and nerve-wracking. Nurses stand in the middle of D dorm and call out to patients to have their vitals checked, a method that “would never happen at any other hospital.”

“Not to mention that some of the patients are far too sick to be expected to get out of their beds and come stand for vitals – it’s atrocious that any ‘nurse’ would expect this of a patient,” she adds. Patients who are unable to line-up for the vitals check are ignored.

In early December, one man who was unconscious in a bathroom, had defected on himself. Other patients called nurses repeatedly to no avail.

“After repeated, ignored calls to nurses, 4 other incarcerated men cleaned him up and carried him to his bed. This man ended up, finally being sent to an outside hospital that same day,” she says.

The same men that came to this man’s aid, continued to help others who were more sick than they were and did this for weeks because nurses were not getting it done.

“They are not porters, have no medical training and are sick themselves. Why are sick people feeling obligated to make such sacrifices?” she questions.

“So many speak so terribly of these people inside, people they do not know and immediately label them as evil. How evil is one really when stepping up to help the sick after the people that not only took an oath but are paid to do it, refuse to do it? Are the nurses that are unwilling to help the sick any less evil because the sick happen to be incarcerated?”

Further, she says nurses are ignoring corrections staff who are calling for ambulances. She suspects that medical staff are unwilling to send patients to outside hospitals because it reflects poorly on them.

“They are being left to die,” Elizabeth painfully said. “No one, not the staff, nurses or CDCR administration cares.”

CMF went from having no cases for several months to reporting a massive outbreak in December. Many have cast doubts on the testing protocols and its role in spreading the virus rather than curbing it.

CMF utilizes rapid testing, which is known to have a high false positivity rate. As a result, many medical providers recommend taking two rapid tests to confirm one’s results. At CMF, medical staff either do not administer a second test or transfer the patient to quarantine before the result of the second test is obtained. Elizabeth recounts multiple stories of men who were not sick, testing positive, and falling sick after being transferred to D-dorm.

If a patient refuses to move dorms, there are other consequences.

“They move this person, who absolutely does not want to move into a unit with all sick people, but refusing will definitely result in a 115 [a rule violation report] which ultimately equates to a [parole hearing] denial so they bite the bullet and go.”

As a result, many including Elizabeth’s husband are refusing to be tested. “If he keeps testing it’s only a matter of time before he ends up with a false positive, they move him to D dorm and then he will actually get sick,” she adds.

Regarding the corrections officers, she calls their treatment “psychological torture.”

“[Incarcerated people] were mocked all the time for wearing masks and [staff] would just flat out refuse to wear them,” she says. “COs thought it was so funny to walk up close to them and start coughing.”

One staff member angrily came into an inmate work space without a mask. When someone asked him to step back and reminded him that he was mask-less, he “looked the man over and said, ‘don’t you have a parole board review coming up?’”

She reminds us that the threat of coronavirus is different for guards than incarcerated people. “You don’t want to get sick with a virus that statistically, has a much higher chance of killing you than it does the person who is taking the risk of unknowingly passing it to you – it’s just seeped in arrogant privilege.”

The inequality between guards and patients continues even with basic supplies like hand sanitizer, Elizabeth explains.

“They have been ridiculed, threatened and dehumanized; they have had hand sanitizer withheld due to the alcohol content yet forced to produce it to keep others safe and when hand sanitizer is donated it never gets to the incarcerated.”

Before the global pandemic, correctional facilities generally banned hand sanitizer out of concern for the product’s alcohol content.

“It says a lot when a system rather would risk 100,000+ lives to a pandemic than risk the chance that one person MAY drink some hand sanitizer,” Elizabeth tells us.

Elizabeth also echoed numerous complaints regarding the insufficiency of food. She shared the following images of meals served this month.

With kitchen staff being out sick, many kitchen duties are left unattended leading to a rampant shortage of food. 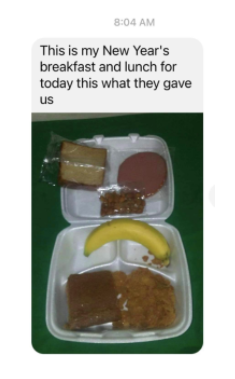 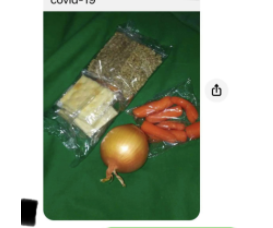 “People are really upset about the food (or lack of) that is being served during this pandemic,” Elizabeth says. “This wouldn’t feed my [elementary-age] son, how is this supposed to feed my… husband? And an onion? Really?”

Incarcerated individuals with disabilities and those with chronic illnesses are worse-hit. Many ADA workers have been out sick, leaving no one to help those on wheelchairs with simple tasks.

One patient who was dependent on a CPAP machine, had his taken away because it was deemed “non-essential.” CPAP machines help people with sleep apnea breathe while sleeping.

“At the beginning of the pandemic, they took all CPAP machines from people and advised anyone that absolutely needed theirs, that they would need to move to a single cell in order to use it– this was back in April or May,” Elizabeth explains.

A doctor has stated that this patient “unequivocally, needed to sleep with a CPAP machine always” if he was going to be moved to D dorm. But staff took his machine when they moved him in, regardless.

“I think it was after the 3rd complaint that they finally moved him to an ad-seg (segregation) unit in W wing so that he could have his CPAP machine. Perfect, right? Yeah, you would think so, except, W wing doesn’t have electrical outlets in it.”

Elizabeth is still trying to find out what happened to the man.

In light of the pandemic, in-person visitation is not possible for patients at CMF. Instead, CDCR has allowed one 30 minute video visit every 30 days.

But Elizabeth’s family has yet to get even one visit. And she believes it is because her husband is still healthy.

“Most of the people that have not gotten sick have not been allowed a video visit.  MCSP even messed up and put a memo stating that video visits are only allowed for people who have gotten sick and recovered.  So my husband, myself and all of our kids are being punished because he hasn’t gotten Covid (yet).”

Since December 24, patients have been allowed out of their cells to call home and shower every 3 days. The waiting periods, after months of no visitations or video visits, are “torture” for their family.

Though it is impossible to express the anguish Elizabeth’s family faces, her detailing of their fleeting calls speaks volumes.

“Every time the caller ID shows his beautiful face, I hold my breath as the operator says you have a ‘collect call from’ and listen carefully for him to respond [with his name] and in that 1 second, I listen – is he stuffy? Is he coughing? Does he sound different? It’s definitely one of the hardest things I have gone through and our son just misses his dad and doesn’t understand.”