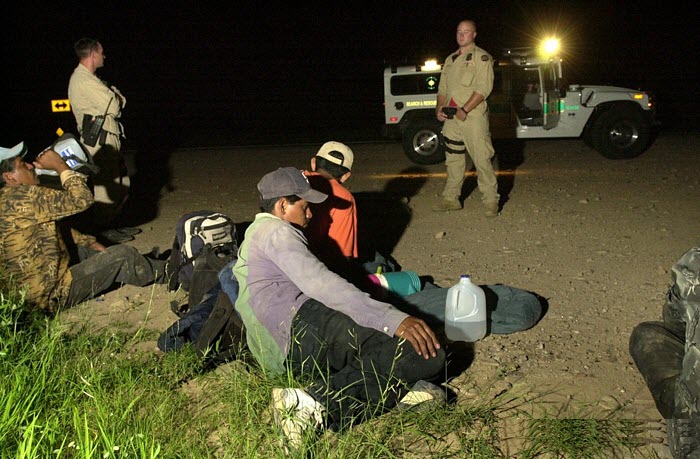 LOS ANGELES — Private contractors, acting as de facto bounty hunters for the U.S. Immigration and Customs Enforcement (ICE) to arrest people at jails and prison, are the focus of a federal civil rights lawsuit announced today to end the practice.

The actions of ICE to use third-party contractor, G4S Secure Solutions, Inc., is illegal, according to Asian Americans Advancing Justice – Asian Law Caucus and the ACLU Foundation of Northern California in a class-action lawsuit. Munger, Tolles & Olson LLP, is co-counsel.

“Federal law prohibits ICE from using private security to make immigration arrests, a fact that immigration officials have willfully ignored,” according to a statement by the civil rights groups.

The pleading – filed in U.S. District Court, Central District of California – asks for an injunction against ICE  and other immigration officials at the Los Angeles and San Francisco Field Offices, “barring ICE from using private contractors to make arrests.”

The complaint charges ICE has sent G4S contractors to prisons and jails throughout California since 2016 to arrest hundreds of people and transfer them from state and local custody to immigration custody.

“Many have been cruelly ripped away from their families and sent to out-of-state ICE prisons ravaged by COVID-19,” noted plaintiff lawyers, who add that although the state of California is “aware of G4S’s abusive practices (it) continues to voluntarily collaborate and turn Californians over to G4S.”

“State officials’ practice of continuing transfers to ICE during the COVID-19 pandemic, despite the widely documented, gruesome

conditions in ICE detention centers, exhibits a blatant disregard for their constitutional obligation to safeguard the welfare of those in their custody,” counsel added.

The ACLU Foundation of Northern California said it filed a 2019 action against G4S for four women, who were shackled by their hands and feet in a windowless van in scorching heat, “causing some of them to struggle for breath and fear they would die.”

”ICE flouts the law every day and California officials are complicit in this behavior. Fully aware that ICE’s use of contractors is unlawful and dangerous, Governor Newsom has refused to stop collaborating with ICE,” said Jenny Zhao, litigation staff attorney at Asian Americans Advancing Justice – Asian Law Caucus.

“Instead, he vetoed a bill in 2019, that would have prohibited state prisons from facilitating these arrests. We don’t need more rhetoric about California’s leadership; we need the Governor to take action and stop criminalizing immigrants and refugees,” Zhao added.

“ICE shouldn’t take people into custody period, let alone use G4S which has a long history of mistreating individuals during transport to and from immigration detention centers. Government funds shouldn’t be used to break up California families. The Biden administration should revisit the current policies and ultimately cut off these pathways to deportation,” said Vasudha Talla, Immigrants’ Rights Program Director at the ACLU of Northern California.

The plaintiff in the current lawsuit, Gabriela Solano, 48, is a permanent resident and domestic violence survivor who was taken by G4S when she was released from prison after 22 years in custody.

“I’ve been dreaming of being reunited with my family and community for so long, and now it could finally happen. But the fear of being arrested by G4S, locked in an ICE detention center, and possibly deported to Mexico, keeps me up at night,” Solano said. “I was brought here to the U.S. at the age of two and my closest family is here. This is where I hope to build a new life with the second chance I’ve been given.”

Another example cited by plaintiff lawyers of ICE’s reach is Ny Nourn, born in a refugee camp in Thailand after her mother fled genocide in Cambodia. She was sentenced to life in prison for failing to stop a murder committed by her abusive partner weeks after she turned 18.

In May 2017, after the state of California deemed her suitable for release, she was arrested by a G4S employee and detained by ICE for six months. She was granted protection from removal by an immigration judge and was later granted a full and unconditional pardon of her conviction by Gov. Newsom.

“For weeks up until my release, I was overwhelmed with stress and fear that I was going to be re-arrested all over again by ICE, face worse prison conditions in immigration detention, and may never see freedom in America again, the only home I’ve known since I was five years old,” Nourn said.

“On the day of my release, instead of being reunited with my family, I was arrested by a G4S officer who placed me in chains and an unmarked vehicle. All I could do was hold back my tears with feelings of shock, fear, numbness, and disappointment.”