BERKELEY – UC Berkeley’s Department of Cinema and Digital Media hosted a live lecture on Wednesday with Aspara DiQuinzio, UC Berkeley senior curator of modern and contemporary art, who spoke about her new art exhibition, “New Time: Art and Feminisms in the 21st Century.”

DiQuinzio gave a presentation on the exhibition that was scheduled to open in August 2020, but due to the pandemic, got pushed back.

She said she has been working on this project since 2017. She said the topic of the exhibition revolves around feminist art projects dating back from 2000 to today.

The project was initiated in 2017 right after Donald Trump was elected president. In response, she created a collaboration of institutions called the Feminist Art Coalition. She received a Warhead Grant of about $50,000 to fund it.

Quickly after the project began, she started contacting institutions across the country and formed the steering committee, where their website was created and launched on election day of 2019, a year before the project was to be presented.

The premise of the website was for it to be a platform among institutions for projects about feminism.

Originally, all of the participants in the project were going to showcase their projects across the country all at the same time. DiQuinzio said this would create a strong groundwork for people to talk about issues relating to feminism.

She said this was planned to occur around the time of the 2020 election so that the misogyny in the world could be seen.

Their website has a list of all the institutions involved while also giving a description of each of their projects. The website also has four writers and displays their views on feminism.

She said the exhibition reflects a range of ages through the artists along with making it as diverse and as international as it can be.

One important point DiQuinzio made was that the word “feminism” was plural in the title because there are so many different types of feminisms today that open up the concept for discussion, allowing for various perspectives.

She said the title was inspired by a Bay Area poet, representing the disorientation of time between the artists and the readers.

The exhibition is divided into eight separate themes, forming many different mini-exhibitions.

While DiQuinzio said the art was from 2000 to the present, the first section titled “Hysteria” related to the 19th century.

She said the term “hysteria” was first used in around 1885 and referred to a diagnosable physical illness among female patients.

DiQuinzio said a pseudoscientist wanted to document every phase of hysteria in women and had them essentially perform each stage before they were allowed to leave the hospital.

The second section was titled “Returning the Gaze,” which was centered around the cinema-constructed male gaze in which women pose seductively for men.

DiQuinzio said some artists attempted to deconstruct this through their different forms of art to question what the male gaze says about women’s bodies.

“Time as Fabric” was the third section where DiQuinzio explained that the artists were revisiting historic themes to reinterpret them within a feminist lens and call into question how feminism was previously treated.

DiQuinzio said the different artworks in this section went into different perspectives on the physical transformations of bodies and queer communities while also questioning modern narratives through the lens of gender.

“Womxn Workers of the World Unite” was the next section, and it explored activism, domesticity and labor, taking its title from the Marxist rallying cry, altering it to be more gender-inclusive.

Section six was about female anger, giving the most well-known example of the movie “Pussy Riot: A Punk Prayer.” DiQuinzio said the film will be featured in the face-to-face exhibition.

“The Future is Feminist” was another section that was centered around various utopian visions about feminist practices.

DiQuinzio then showed different video clips dedicated to feminist projects and feminist themes as part of the final section.

She explained that the themes that developed around the entire exhibition formed themselves through all of the different art pieces.

She ended with the hopes that everyone would be able to see the exhibition once it opens, and that it will spark a much-needed conversation about the different types of feminism. 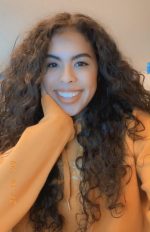