Despite being neighboring counties, the two DA offices embrace distinctly different ideologies for successfully tackling crime within their jurisdictions.

DA O’Malley’s office, for example, emphasizes a commitment to upholding a “safe and livable community through the fair and effective administration of justice,” while prioritizing support for the victims of crimes.

DA Boudin’s office, on the other hand, “strives to protect public safety in San Francisco by using innovative, evidence-based approaches” and focuses on “prioritizing treatment, resources, and support for those whose crimes stem from underlying struggles.” 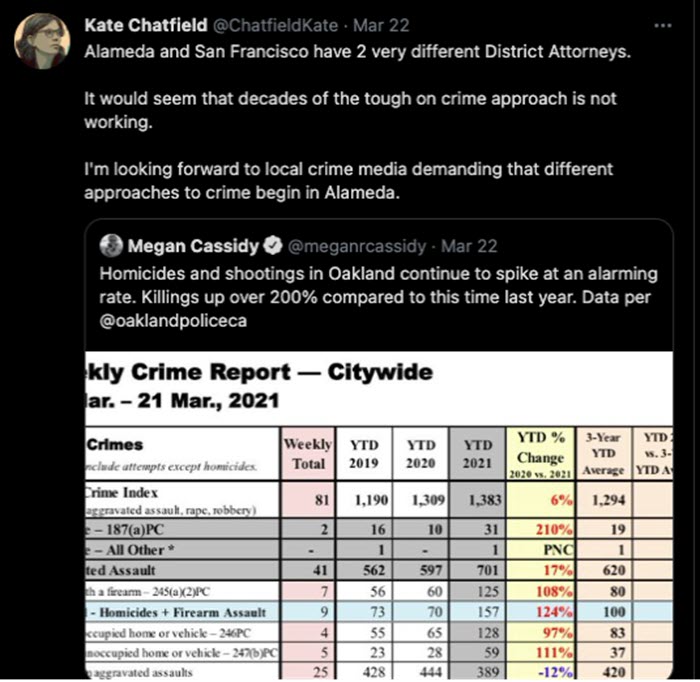 After SF Chronicle reporter, Meghan Cassidy, pulled the alarm on Oakland’s distressingly high homicide rate—up over 200% compared to the previous year—Kate Chatfield questioned whether “decades of the tough on crime approach” was accomplishing O’Malley’s goal of ensuring a “safe and livable” community for the citizens of Oakland.

Chatfield’s critical examination of O’Malley’s tough on crime approach diverges from the growing sentiments of the the Recall Chesa Boudin movement, demanding the recall of the reform-minded district attorney who only took office in November of 2019.

Organized by San Francisco resident Richie Greenberg and approved for petition signature gathering on March 3rd, the Recall Chesa Boudin Movement condemns the “disastrous social experiment of criminal justice ‘reform’ and the so-called restorative justice model” of the DA, and claims that he has “dismantled the criminal justice system.”

The movement, Greenberg explains, was inspired by the increasing number of local crimes, such as robberies and burglaries. However, since DA Boudin has maintained his progressive policies and intentions from the start of his term, according to police data, the overall crime rate, especially violent crime, has continued to decrease.

In Alameda County however, the crime statistics tell a different story. In the last three years, Oakland’s homicide rate has increased by 63%. Rates have continued to rise, exceeding the prior year’s level by over 200%.

As these alarming rates push experts such as Kate Chatfield to question the validity of tough on crime approaches to keep the community safe, and look to crime media to demand the pursuance of alternative approaches, SF DA Boudin’s innovative policies provide a possible alternative for other offices to look to, having seen promising statistical results.

Mia Machado is a junior at UC Davis, currently majoring in Political Science-Public Service and minoring in Luso-Brazilian studies. She is originally from Berkeley, California. She is a team member on the Chesa Boudin Recall – Changing the Narrative Project.