James** is currently incarcerated at Mule Creek State Prison (MCSP), one of CDCR’s 35 facilities. He is a lead reporter for the prison’s newspaper – Mule Creek Post. He sent us a letter about how the facility has been handling the pandemic over the last 10 months.

James tested positive for the virus on Nov. 29 and vividly remembers the night he was awoken by correctional officers to be moved into quarantine. It was 1 a.m. in the morning and 30 others were awoken and ushered into a small gym located in the lower yards. The gym had 35 camp-styled cots with new mattresses spread six feet apart. They were given minimal instructions and were told to stay in their beds. This was the first night of quarantine.

He says the second day of quarantine was just “bearable”. The brand new mattresses and cots were replaced by old metal bunk beds to accommodate for incoming patients. This means that space was becoming crammed, not allowing for proper social distancing.

Those in quarantine, about 90 percent of James’ pod, were given extra clothes and KN-95 masks since their cloth masks were deemed useless. A medical representative explained symptoms of COVID-19 as well as the statistics behind recovery percentages and mortality rates. The representative emphasized no vaccines were available at the time and patients were fighting the disease from within and just had to wait it out.

That same night, one of the individuals in quarantine was heaving and carted to the hospital. James’ says, “We were all shaken up and remained strong for one another. Unfortunately in here, we will never find out the results of his condition, neither would his family until it seemed dire.”

The medical representative returned to inform everyone in quarantine that only half of them tested positive, and the other half of the results were inconclusive, meaning everyone would be separated and moved again. James reports they were forced to pack up and move to the B-yard gym. This implied matters were going to get worse because those in Levels 3 and 4 were mixing in with James and his pod members from Level 2. These groups do not usually mingle, so fights and violence were bound to break out.

Furthermore, complaints went unheard and fights broke out, as he predicted.

Since the gyms were overcrowded, James and his fellow cellmates were moved again to the C-yard gym.

Originally, vents were left open, allowing cold air to flow throughout the gym. The temperature did not surpass 57 degrees even with blankets covering them. It was not until concerning phone calls from loved ones that vents were closed off, water temperature in showers changed to lukewarm, and more blankets were passed out.

Notably, not everyone who tested positive quarantined in the gym. Positive patients were mixed with those who tested negative and those with medical conditions such as COPD, heart disease, and diabetes. Patients were crowded together and grew tired of dealing with inhumane conditions. While they were supposed to receive Pedialyte to stay hydrated, nurses refused to hand them out. No one told them when they would be moved out of the gym.

James says medical staff at first were sympathetic, compassionate, and accommodating to patients’ needs, however as the days dragged on, staff were avoidant and stayed mostly out of the gym.

A little over a week after James was brought to quarantine – on Dec. 8 – MCSP had an uproar of cases reaching 523 confirmed cases. Of these, 477 were active in custody, meaning there was severe overcrowding of patients in poor conditions. Within a week, there was an increase of nearly 400 cases.

James believes these outbreaks put CDCR to the test, and failed miserably. CDCR was not prepared even with over six months of preparation. He contends that inter-prison transfers were the main culprit for spreading the virus not only in MCSP, but in other prisons as well.

Being stuck in the gym, took a toll on a lot of the incarcerated patients mentally. James compared the conditions as being similar to living in a refugee camp.

“We were truly forced into a vagrant lifestyle, traveling with meager belongings, living out of packed boxes, and uprooted from the comfort of ‘home’.”

Depression became a constant companion for many who were quarantined. From what James observed, “For most, just lying in bed and sleeping through everything was their only remedy. Even the little sparrow which fluttered above throughout the day, died in an accidental, or suicidal fate with a ceiling fan.” Anger erupted among quarantine patients and staff as treatment and conditions worsened. He explains how some retaliated against this aggravated environment.

What really helped some of them was the constant support from family, friends, and concerned members of the community. Phone calls were flooding into the warden’s and governor’s office regarding the inhumane conditions. Some gyms did not have access to a phone, so families were left in the dark about their situation.

When families asked CDCR officials about the ongoing situation, their typical response was “Everyone is being cared for.” However, James argues “no captain, sergeant, or Assistant District Attorney’s Representative made an appearance.” Most complaints made by the incarcerated population were contradicted by the administration.

Two weeks went by and James and others were relieved to leave the gym and return to their yards. However, they were not returning to their cells, instead were being placed in temporary pods, and had no clue what was going on. They were infuriated by the redundancy of medical staff to re-test them, even though they already had COVID.

James heard similar stories about conditions from people in other quarantine gyms. They complained about no access to showers or toilet facilities except for the port-a-potty during the day, which of course was outside the gym. Showers were allowed once every three days, temperatures were cold, and no phone was accessible.

For James and others who were considered “immune” to the virus, they were classified as “critical workers” or forced labor to “volunteer” and fill in the vacant jobs like porters, yard crew, and kitchen staff. He says, “Once we were freed, we were forced, not asked and threatened with RVR (Rule Violation Reports).”

Most were still recovering and exhausted. Anxiety continued to loom over the status of personal property or when individuals could return to their cells. Tension continued to build between staff and the incarcerated population.

James expresses, “We are inmates and in their eyes, less than slaves, forced in labor even when recovering. If sick, we are ignored. Whatever comforts we built for ourselves were easily torn down.”

“Inmates were made to be unredeemable, seeking faults in all we do. If we complain, we are not grateful. If we spoke out, we were considered liars and disobedient. And still we were blamed for spreading the coronavirus.”

He concludes with a powerful anecdote. 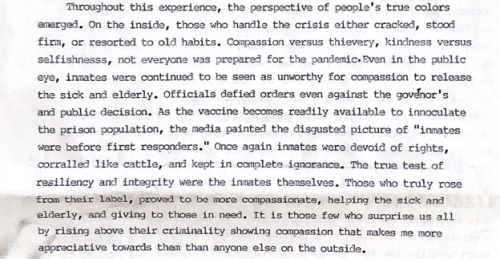