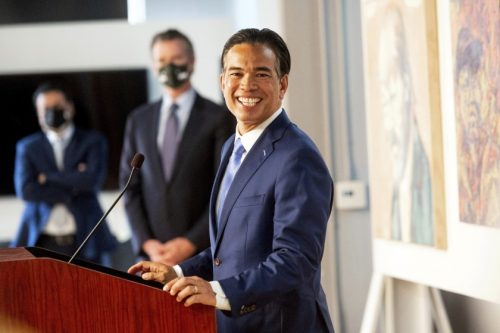 If confirmed by the state’s Democrat-controlled Legislature (as is expected), Bonta would serve as attorney general until 2022, when he would have to run for re-election. He would fill the seat of Xavier Beccera, who made history as the first Latino to be confirmed as U.S. Health and Human Services Secretary under the Biden administration just weeks ago.

Bonta—the first Filipino-American to be elected to the California State Assembly—first emerged in California politics in 2012, when he was elected to represent Oakland, San Leandro, and Alameda in the state assembly’s 18th district.

Throughout his political career, Bonta has made massive strides to reform California’s criminal justice system. He is well-known as a co-author of Senate Bill 10 (SB 10), a piece of legislation that, if passed, would have made California the first state in the nation to completely eliminate the use of cash bail. Unfortunately, SB 10 was overturned by Proposition 25 in the 2020 election.

Among other impressive policy efforts, Bonta has advocated for the banning of private prisons, investigations into police shootings of unarmed civilians, and that marijuana-related offenses be expunged from criminal records following California’s legalization of recreational marijuana in 2016.

Bonta also plans to utilize his role as attorney general to protect people, and that he supports establishing a 24/7 hate-crime hotline in the Office of the Attorney General.

Governor Newsom praised Bonta during the attorney general nomination at the International Hotel-Manilatown Center. Newsom remained confident that “Rob has become a national leader in the fight to repair our justice system and defend the rights of every Californian … Rob has fought to strengthen hate crime laws and protect our communities from the forces of hate. He will be a phenomenal attorney general, and I can’t wait to see him get to work.”

Others, such as Kent Scheidegger, Legal Director of the Criminal Justice Legal Foundation, oppose Bonta’s nomination, expressing that Bonta is “fully on board with the fundamentally wrong direction that California criminal justice has been taking in recent years.”

Scheidegger’s comments echo a growing pushback against progressive prosecutors in California, who are winning seats in large numbers.

If confirmed as attorney general, Bonta will come into office facing a multitude of crises, from a rise in hate crimes against Asian-Americans to national calls for accountability and justice regarding police brutality. Whether Bonta will follow through on his promises to address these issues remains to be seen—but it is clear that he will face enormous scrutiny on the campaign trail in 2022 should he fail.