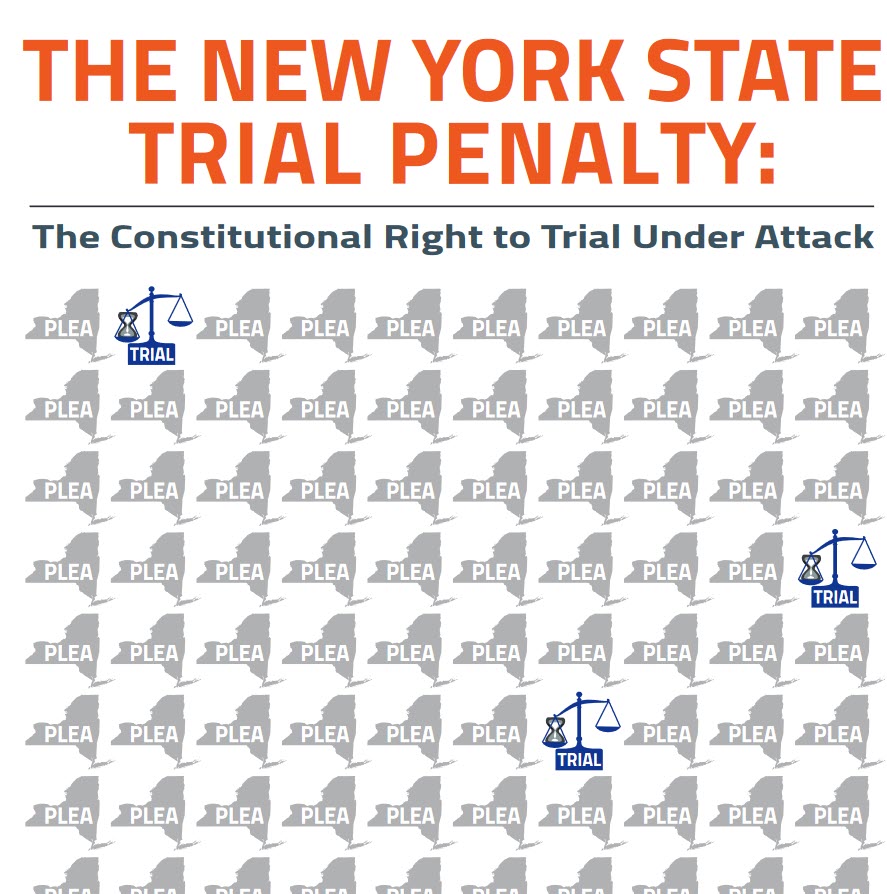 NEW YORK – Across the country, jury trials are vanishing at an alarming rate as defendants more frequently accept plea offers in lieu of appearing before a jury of their peers. In New York State 99 percent of misdemeanor charges and 94 percent of felony charges are resolved by a guilty plea.

Those are similar to rates in all other states, including California.

According to the recent report, “The New York State Trial Penalty: The Constitutional Right to Trial Under Attack”, criminal defendants “face a trial penalty when they receive a sentence after trial that is substantially greater than the plea offer they received before trial.”

This process, which incentivizes defendants to accept a plea when they may not otherwise, is broadly practiced in courtrooms across the country.

A 2013 Human Rights Watch study, which analyzed federal drug cases, found that the “average sentence of federal drug offenders convicted after trial was three times higher (16 years) than that received after a guilty plea (five years and four months).”

In 2018, the NACDL affirmed that this trend was widespread as well. NACDL found that federal criminal defendants, even those who were actually innocent, were frequently coerced into pleading guilty because the potential penalty associated with exercising their constitutional right to trial was simply too great.

To analyze this problem across New York State, the NYSACDL assembled a sample of more than 300 criminal defense attorneys who shared their personal experiences and observations. 94 percent of

The study found that in 66 percent of cases sampled defendants experienced a trial penalty.

The data also showed a correlation between an increase in the duration sentences offered in pleas and the eventual sentences at trial. According to the study, “a plea offer of five years was associated, after conviction at trial, with a sentence of 7.5 years and a 20-year offer would be associated with a 28-year sentence.”

This results in some very stark discrepancies. The document cites the case of George Mims, a Bronx resident who was tried for two armed robberies. Five minutes before the jury was to give their verdict, the prosecution offered a plea deal of 10 years, which he rejected maintaining his innocence. He was sentenced to 40 years.

The NYSACDL blames a variety of factors for this increase in prison sentences.

In their estimation, “Prosecutorial practices such as aggressive charging, judicial pressure to plead guilty, and the prospect of severe criminal penalties, sentencing enhancements and mandatory minimums should a defendant proceed to trial are significant contributors.”

The result is more than punitively long sentences for defendants; In the NYSACDL’s opinion, it undermines the entire judicial process.

“The New York State Trial Penalty” cites a number of examples where, without a jury trial, constitutional rights languish. As jurors, the lay public provide important oversight to courts and law enforcement. Trials necessitate the presumption of innocence for defendants and mandate the courts to charge based on evidence.

Mandatory minimums undermine sentencing and eliminate individualized case-by-case evaluation. By accepting a plea, a defendant waives their right to appeal and this undercuts the appellate courts’ ability to supervise trial courts throughout the country.

The NYSACDL identifies three areas to address the trial penalty crisis: Reducing defendants’ exposure to severe and disproportionate sentences, protecting defendants who exercise their right to trial and the use of data to drive reform.

To limit severe sentencing, NYSACDL advocates for the elimination of mandatory minimums, the curtailment of expansive criminal codes, and a “Second-Look Statute” would be enacted in order to review lengthy sentences to ensure that they are not disproportionately long. They also encourage alternatives to incarceration such as expanded compassionate release and clemency options.

To protect the rights of defendants, the NYSACDL suggests restricting prosecutors and judges from offering pleas based on waiving constitutional rights that are necessary for making an informed decision, such as the right to pretrial release, pretrial motions or the right to investigate their case.

Several New York State statutes are singled out in the study to be stricken or changed, including NYCPL § 220.10(5), which the limits the defendants to plea to a lesser charge and NYCPL § 710.70, to preserve appellate review of pretrial decisions.

The Code of Judicial Conduct would also be amended to bar vindictive or punitive sentencing for defendants who reject a plea offer and chose to go to trial.

In order to track reform and gather data, the study proposes monitoring plea agreements in state courts, and to discontinue the practice of evaluating judges on pretrial disposition quotas and hearing volumes, which discourages lengthy proceedings. Instead, the NYSACDL would like to see New York courts trying more cases.

They recommend increased funding for judicial, prosecutorial and defense functions, and to end criminalization of “disfavored social or personal behavior” which overburden court dockets. Their goal is to see that state courts have the time and capacity to ensure cases are decided in the interests of justice, not expediency.

In the view of the NYSACDL, the ability of a defendant to seek trial without fear of retaliation is fundamental to that sense of justice.

“No one should be punished for exercising her or his rights, including seeking pretrial release and discovery, investigating a case, challenging law enforcement conduct, and filing or litigating pretrial statutory and constitutional motions – Trial penalty…undermines the integrity of the criminal justice system.”