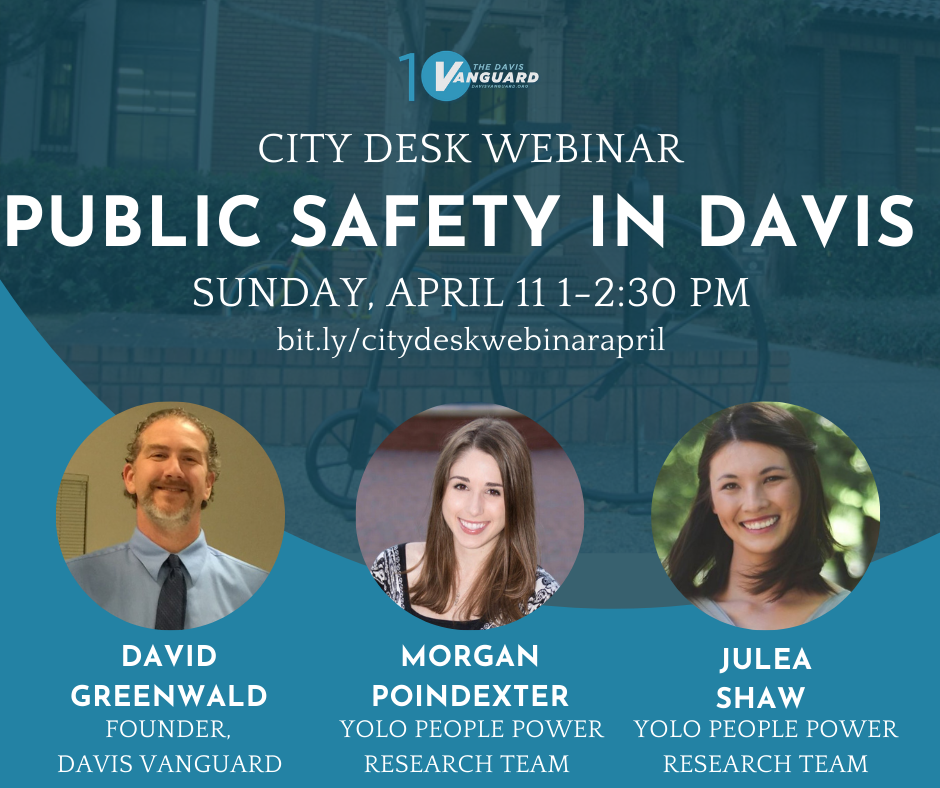 On Apr. 11, the Davis Vanguard hosted a webinar presented by the city news desk of the Vanguard at UC Davis to dive deeper into matters of Davis public safety after the Apr. 6 Davis City Council meeting.

The panelists for the Webinar included Davis Vanguard founder David Greenwald, YOLO People Power Research Team Members Morgan Poindexter and Julea Shaw, as well as Independent Police Auditor Michael Gennaco. The panelists expanded on the process of imagining and working towards public protection for the city.

The first couple of questions were all directed at Gennaco with the first question asking about use of force cases in Davis, what types of calls and arrests were associated with these cases and how many officers have been involved.

Gennaco stated how the Police Accountability Commission can request the Police Independent Auditor for audits and that in January of this year, the bureau was given an assignment to check on some of the model use of force policies that have been proposed throughout the country.

“We are going to take a look at all the use of force reports throughout 2020,” Gennaco said. “Out of the eight that were reported, we are looking at seven of them while the remaining one remains under investigation. Since we just received these packages three days ago, I believe that we’ll receive answers soon.”

The second question asked about any commonalities between use of force cases that he’s seen.

Gennaco responded that he usually looked at cases where individuals complained about use of force. However, there were no complaints for these seven cases. He claimed that the audit was specifically important because they wouldn’t be seeing all use of force cases unless there were serious complaints or the department initiated an internal investigation.

The third question asked whether other departments have been establishing independent bodies or whether they are in the process of educating police officers and reimagining public safety.

Gennaco stated how his phone has been blowing up ever since the George Floyd murder, with many of these calls expressing interest from jurisdictions in building oversight.

“A large majority of these have no review board, auditors, or police accountability commission,” he said. “To Davis’ credit, they do have something. It builds a level of transparency which other jurisdictions are starting to work towards. A lot of people often ask me about what’s going on in Davis in this regard.”

When asked about whether or not any other police departments have received money with the purpose of educating officers, Gennaco claimed how there were some agencies trying to divert public safety responsibilities to other entities. Though he acknowledged how there are some non-profits around, a traditional outlook shows how it’s been the police that has usually responded to these matters in the past. He further added how bringing in mental health professionals and removing the homeless liaison out of the police department are all examples of keeping police out of being in charge of social services.

The next question directed towards all panelists asked about the types of jobs that would be in an independent department of public safety once established and whether there are any timelines for when the department can be expected.

Poindexter responded, “Mike just described how we haven’t been funding social services, not only as a city but overall as a country. This is coupled with a tendency to fund police departments by having a huge part of the city’s discretionary budget going towards the department. Fundamentally, the effort is to tip the scale and proactively find ways to balance this funding. We want to get people to help up front, and a department of public safety is how we can really bring in social services to the people of the city. Additionally, police interactions with people of color have and still are traumatic. We want to limit and funnel interactions where weapons aren’t needed to other people.”

Additionally, Shaw added how there hasn’t been much of a timeline in terms of the city but that plan is to initiate a department of public safety moving forward by working closely with the county.

Building off on educating officers, the next question asked panelists whether a positive impact is produced when police are educated on racial bias.

All of the panelists stood in agreement that there was a positive correlation between police officers receiving a college education and less racial bias. This was mainly attributed to the fact that studying in a college environment requires working and co-existing with people of many different ethnic backgrounds.

Gennaco stated, “Everybody has inherent bias but there seems to be less in people who receive higher levels of education. A college environment means studying and working with people of color which is the most significant factor in how much bias an officer has.”

However, the panelists also emphasized how the need for educating officers isn’t just to give them more exposure to diversity but to also give them more perspective on the world, deeming them better fit for serving the community once they enter the police force.

Greenwald stressed this by claiming, “Seeing police officers testify is quite scary. I can go down to San Francisco and see that most of the officers are young and clearly didn’t go to college. Their knowledge of the law is questionable at best. You really get a sense that these are not people that understand the world very well. They make a lot of ungrounded assumptions. It scares me knowing that these people have guns.”

Moving on to the city’s talk about people from out of town coming into Davis specifically to commit crimes, the panelists were asked to describe the data about these concerns.

Once again, the panelists were in agreement, claiming that the concern for non-residents is more severe than it needs to be.

Poindexter expressed skepticism about where these claims were arising from. She explained how out-of-town people coming into Davis shouldn’t be a surprise, especially with Davis being a college town. Poindexter also elaborated by stating that Davis is relatively less diverse than neighboring cities, and the distinction between residents and non-residents seemed unwarranted.

Greenwald and Shaw also provided some statistics on the issue, with the former stating how there are 25,000 to 35,000 people coming into the city to study or work with 10 to 20 percent of downtown workers being from out of town, while the latter shared how Black Davis residents are five times more likely to be arrested, showing clearly that a disparity exists.

“If we are spending our time and energy on making change, then we need to figure out how to get these people jobs,” she said. “If there is a worry that homeless people create more crimes, there should be a simultaneous effort to make sure there are less homeless people.”

The next question revolved around whether someone not directly involved in a use of force incident can file a complaint and what, according to the panelists, was the biggest problem in how existing safety operated.

To this question, Gennaco gave assurance that anyone can file a complaint to him with the case-related information. To the second half of the question, Gennaco quoted, “I would have to say that there has been a paradigm shift in which communities are being more involved in public safety and how public safety functions within safety. This has been the biggest challenge.”

When the panelists were asked whether other cities that had undergone changes had seen success, they detailed how other cities have undergone a phase of transition that required cities to adopt a co-responder model before finally moving to a mobile crisis team. However,  cities are now attempting to make the leap straight to a mobile crisis team which would save a lot of the money and time that these transitions require.

When asked whether the Davis Police Department and city are collecting and reporting the appropriate data for monitoring bias, Gennaco responded, “The data we’ve seen has served as a positive indication. However, understanding what the data means is the bigger challenge. I worry how much time is spent on writing whether the data is good as opposed to finding solutions to them. But finding these solutions are hard, especially when we don’t know what to expect.”

Greenwald further added that diving deep into the types of racial behavior that is victimizing people of color and the poor would be a much better way to spend time as opposed to debating over numbers.

Regarding the sudden leap that was made from discussing out-of-town residents committing crimes to non-white people committing crimes, Poindexter expressed the growing fear in society despite crime rates going down. She emphasized how it’s important to make sure that people aren’t more frightened by the people who don’t live around them or don’t look like them.

Relating out-of-town discussions to matters regarding race, Shaw quoted, “This usually appears in the context of race data in relations to disproportionate stops and racial arrests. This leads to a possible connection that people can potentially make in their heads.”

The panelists were also asked about the mobile unit crisis which used to be very active in Davis and whether or not the city can expect it to be accessible anytime soon.

In response, the panelists professed the importance of having a point person on the city staff to figure out costs and implementations and understand whether there needs to be a bigger broader county effort for this to happen. There was also a sense of excitement that the city’s Health and Human Services director Karen Larson was asked to do a presentation during the recent city council meeting.

The last question of the webinar was from Davis Mayor Gloria Partida, who asked the panelists for their thoughts on how to stop burglaries before they happen, considering the business community’s complaints in addition to having poor people being more likely to work the night shifts.

Greenwald replied, “When we look at data and see what percent of crimes go unsolved. One of the biggest debates in criminal justice reforms is focusing on the severity of sentences or the certainty you’re going to get caught. There’s the belief that if there’s a very low chance of getting caught, people will be willing to take that risk. This is a question best suited to be answered by the police department themselves.”