SACRAMENTO, CA – In what surely will be a historic moment, California may soon no longer be among the four states that do not have a process to decertify officers who have engaged in serious misconduct.

Senate Bill 2 has now passed the full Senate at the State Capitol here and moved to the Assembly.

Named the Kenneth Ross Jr. Decertification Act, SB 2 will prevent officers who have engaged in misconduct from ever working in the field again. Additionally, the bill will place restrictions on police immunity in civil courts.

Kenneth Ross, Jr., was only 25 when he was shot and killed by a police officer. Officers were initially responding to a shots fired call when they crossed paths with Ross running away. The officers claimed that he failed to follow commands and was ordered to stop several times.

Ross’s case was particularly controversial as it pertains to whether he was armed or not. Authorities claim that after Ross’s death, they located a firearm on him, but the family’s attorneys are not so sure.

This bill comes after a long call for justice and the deaths of many African Americans at the hands of law enforcement.

State Senator Steven Bradford (D) stated his support for the bill by pointing out that California’s refusal to update its policing standards contradicts the state’s progressive claims.

“We lead in technology, we lead in environment, we lead in all those things that are important except for criminal justice reform,” he said. 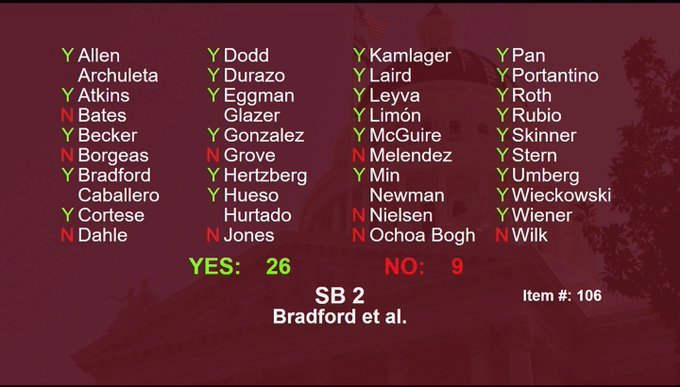 SB 2’s passing is an attempt by Bradford, along with the Let Us Live Coalition, to reintroduce last year’s Senate Bill 731, which attempted to decertify officers participating in extreme misconduct. It failed to pass the legislature and no changes were made.

Under the current system, officers within California who were accused of severe misconduct were typically fired or placed on administrative leave. However, critics were quick to point out that these actions are not sufficient enough, as officers are able to find jobs at new departments even days after a fatal incident.

For example, Officer Garrett Rolfe was reinstated after he fatally shot Rayshard Brooks in a Wendy’s parking lot.

Officer Rusten Shesky, the man who shot Jacob Blake in the back seven times back in August of 2020, is now back on the job after being placed on administrative leave.

And as stated in the press release, “…before Sergeant Michael Robbins – the police officer who shot and killed Kenneth Ross – joined the Gardena Police Department, he had already shot three other civilians while a member of another southern California police department.”

If SB 2 were to pass, officers like Robbins would be banned from wearing a uniform ever again.

Senate Bill 2 would call for the implementation of an advisory board to review allegations made against officers. These boards would be made up of both members of the public and law enforcement.

Under the passing of SB 2, a system of due process protection will be instituted which will ensure that officers who commit serious misconduct are barred from ever rejoining the field. In terms of court cases, SB 2 removes an officer’s absolute immunity protections for harm against the incarcerated, planting evidence, and refusing to provide medical care.

“Further, the bill will allow families who have lost loved ones to police violence to seek justice for civil rights violations if the conduct was a crime of moral turpitude,” said proponents.

As a result of this bill continuing into the Assembly, many people directly impacted by police brutality have begun to speak out and voice their support.

Kenneth Ross, Jr.,’s mother, Fouzia Almarou, stated. “I’m encouraged that SB 2 is moving forward. If this bill had been a law in 2018, my son might still be with us. I pray it passes and that it helps to ensure no other mothers have to experience the pain I live with every day.”

“Today, my family and I are celebrating another step in the right direction,” Caria Hamilton said—she’s the cousin of Diante Yarber, who was killed in 2018.

“For years, impacted families have been organizing in the streets to get to this moment. Now is the time to pass SB 2 to protect Black children and other youth in our communities by removing cops who harm us from our streets,” she added.

“We aren’t asking for anything radical here,” said Amanda Majail-Blanco, the sister of Erik Salago, who was killed by Officer Rich Henderson. “Just for the police to be held to the same standards as everyone else.”

Nina Hall is a sophomore from Colorado at Santa Clara University, studying English and Sociology.