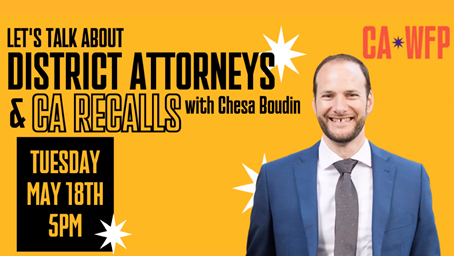 The Working Families Party organized this event to discuss the work of progressive prosecutors and their role in reshaping our criminal justice system.

Policies from SF’s Boudin and George Gascón, the Los Angeles progressive DA, were considered in the discussion of how both individuals face recall movements as they work to dismantle policies in the status quo.

Jose Bernal, the organizing director at the Ella Baker Center for Human Rights, asked Boudin several questions about his efforts so far, including how the recall has impacted those policies.

Bernal prefaced by describing his difficult past, as he grew up with his family in Tenderloin, where he had faced homelessness personally. He described his personal experiences with the criminal justice system, which became the primary motivation behind his efforts to uplift communities and folks in San Francisco.

To Bernal, safety does not necessarily revolve around policing or gun safety, but rather that “the people—indigenous, Black, Mexican, people of color—have a place of shelter, somewhere to call home, and food.”

Bernal discussed how Boudin was the first district attorney that he had voted for because he “supported his policies in reducing the prison complex, the number of people and funds in prison, and the uplifting of individuals in the community.”

Bernal believes that the history of district attorneys’ offices are an extension of slavery and colonialism, in which people of color are heavily disproportionately harmed.

Bernal also highlighted his own work toward reducing gang enhancements in the community, and his work in shifting the narrative of what safety means. According to Bernal, “You could put 1,000 cops in the Tenderloin, but that wasn’t what was going to keep me, my sister, or mom safe.”

Bernal also explained the ridiculous amount of funds that are allocated for prisons, in which the state spends over 50 percent of their budget for issues of criminal justice and policing.

Bernal discussed Boudin and why his race for district attorney was so competitive and how his work outfits those harmed by our criminal justice system.

Boudin reflected on his own personal experiences, where both of his parents had been incarcerated by the time he was one year old. His mother served 22 years, and his father continues to serve a 75-year minimum sentence, from which he may never get out.

Boudin cited this example to highlight his lifetime of personal and professional experience, in which he saw firsthand how the criminal justice system works, its approach to criminal justice, and the fact the U.S. leads the world in locking people up.

Boudin stated that this approach has proved that it does not work, it does not rehabilitate, and it does not make communities safer.

Boudin explained that in San Francisco, 75 percent of the people arrested and taken into county jail are addicted, mentally ill, or both. He urged a new approach that is grounded in community and public health, invested in education and job training, and a district attorney who is willing to advocate for the people—not just the status quo.

Boudin said that these were his core motivations to run in this competitive race, and recalled that this was the first open district attorney’s race in over 110 years in San Francisco, with no one up for reelection.

Boudin believes that this was a historic opportunity that came at a historic time, “where there was a national reckoning with the failure of the tough on crime status quo, and [he] wanted to make sure that San Francisco could build a safer model, one grounded in community and the progressive values that all share as a city.”

He believes that this starts with building safety, providing people with clean water, clean housing, access to mental care, and jobs.

When asked about his biggest legislative successes so far within his office, Boudin recognizes the proud work of his office in the midst of COVID-19. Boudin took office in January of 2020, where he had about two months in office before COVID shut down his office.

Boudin recalled his campaign promise of reviewing old cases, and he explained the creation of an independent innocence commission, which reviews old cases and ensures that “we are not just doing justice going forward, but also ensuring that nobody is sitting in prison based on a false conviction.”

He explained how the commission has actively reviewed a number of cases and expects to announce a few people who have been exonerated in the process.

Another campaign promise that Boudin recalls acting upon is the commitment he has made in being more proactive in fighting for workers’ rights. He created a unit within his office, referred to as the Economics Crimes Against Workers Unit.

The team has already filed two separate landmark lawsuits, under the supervision of Boudin, challenging gig economy companies that systematically misclassify their employees, pretending that they are independent contractors in order to deprive them of basic labor law protections.

Another goal that Boudin accomplished this year was ending cash bail, which is a wealth-based detention system in which “wealthy people can buy their way out of jail while poor people languish behind bars simply because they don’t have enough money to pay a for-profit bail bond company.”

His first month in office, Boudin told his prosecutors that this office did not concern himself with how wealthy someone is, as this shouldn’t affect the justice that each individual receives.

Another important goal that Boudin addressed was his campaign promise to end juvenile incarceration in the city, and his office was able to reduce the number of kids in juvenile hall by 75 percent.

While Boudin and his office have accomplished these goals, he recognizes that he has a “big job” still ahead of him. San Francisco has real public health issues that “spill into the public safety realm. We also have a mental health crisis and an addiction crisis playing out into the streets.”

Boudin stated that “over the last five to 10 years, the jails have become the number one provider for mental health services and the city. It’s not humane, not effective, and it’s not making us safe.”

Boudin also highlighted the importance of working on investing our resources and money in public health resources in an effort to prevent crime from occurring in the first place. Essentially, “we need to make sure that in San Francisco it is easier to get help than it is to get high.”

Boudin believes that this requires bringing together our community partners, not just the mayor’s office, supervisors, or police, but also investing in first responders who are trained with medical skills and not just carrying guns and handcuffs. Further, it means building a system where there is 24-hour treatment and care for people who need it.

Instead of building more jails and prisons, Boudin stated that people cannot wait around for individuals to commit serious crimes and that the community must prevent them from occurring in the first place.

Boudin envisions a city that is safe for everyone, and one where laws are enforced equally—without regard to the color of their skin, how much money they have in the bank, or if they wear a uniform and carry a gun into work.

This is why, he said, his office has been one of the first in bringing charges against police officers who use excessive force against unarmed Black men.

In terms of obstacles, Boudin believes that the biggest obstacles are the wealthy billionaire class and police unions who don’t want to see the changes that he is bringing on, which is why they are doing everything to undermine the work his office has been dedicated to.

This can be seen in the “massive spreading of misinformation, acting as if every crime is the direct responsibility of the district attorney’s office, and a mission to impose recall movements.”

“The first recall was filed by a failed Republican operative who attempted to run for mayor a few years ago. He is raising money from people who are promoting free strikes, who think that racism is a myth, and believe that date rape is just regret after the fact.”

Boudin believes these individuals are advocating for things that are absolutely the opposite of the city’s values, vision, and lived experience.

Bernal stated that these recall movements aren’t specifically coming for Boudin, the person, but rather what he stands for: low-income, Black, Latino, Indigenous folks, all of whom they want to see locked up.