The Covid In-Custody Project partners with the Davis Vanguard to bring quantitative and qualitative reporting on the pandemic’s impact on county jails and CDCR to the public eye. This story is authored by the Covid In-Custody team.

During the month of May, COVID-19 cases in Santa Rita Jail have dwindled. But new cases continue to emerge at intake or in custody and the jail population is on an upward trajectory, meaning that the threat of infection still persists.

The Alameda County Sheriff’s Office (ACSO) reported six new cases within the jail population and two new staff/contractor cases this month. Currently, two incarcerated people and three staff/contractors have active infections. In the month of April, a total of eight cases were reported within the population.

Weekly testing rates have been relatively low – ranging from as high as 17% to as low as 9% of the population.

Wellpath, Santa Rita Jail’s medical provider, began administering vaccines to those with underlying medical conditions and comorbidities on March 1. The vaccine rollout has since expanded to other parts of the jail population.

Since the population in these HUs changes frequently due to transfers, releases and intake, there may be new residents in these units who have not been offered the vaccine yet.

A breakdown of vaccines administered as of May 7 by ethnicity, sex and age was provided by Mike Durbin, Health Services Administrator for Wellpath. The distribution of vaccine uptake across first dose Moderna, second dose Moderna and J&J are similar. 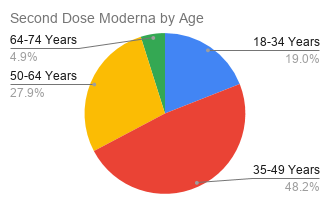 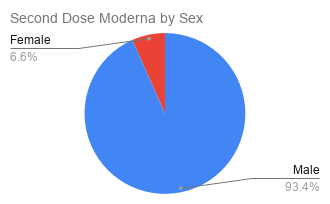 A survey developed by the Alameda County Public Health Dept. to track incarcerated people’s attitudes toward COVID-19 vaccinations and testing, was offered on tablets and on paper between March 23 through April 16. Liz Maker, a Public Health Dept. representative who is leading the survey efforts, shared a preliminary analysis of the responses.

60 responses were deemed viable for analysis, however, there is an overrepresentation of individuals of age 30 years or older, women, and whites.

Only 36% of the survey respondents were African American, despite constituting roughly 50% of the total jail population in February.

A few respondents said that they did not want to take a test because they had heard from others that their results would not be returned.

1 in 10 respondents said that they did not want anyone in the jail to know they tested positive for COVID-19.

Maker referenced a survey conducted by the Rockefeller Foundation, which analyzed the attitudes of 2,517 people of color in five major cities toward COVID-19 vaccinations, and found that 56% of them thought it was effective. She pointed out that SRJ’s 50% point mirrors the results of the Rockefeller survey.

The most common reason for taking the vaccine that respondents shared, was to protect their own health. Some mentioned having a high risk factor for developing complications associated with COVID-19, as a reason for getting or wanting the vaccine.

Three individuals mentioned that they wanted to get the vaccine to protect their family when they are released from custody.

The most common reason respondents stated for not wanting to take the vaccine was a lack of trust. Some plainly responded, “I don’t trust it.”

Many said they did not trust the vaccine because they felt that it was released too fast or that it was not approved by the FDA. One respondent thought that it would kill people.

Among the 40 unvaccinated respondents, 43% said they would take it as soon as possible and 18% said that they would refuse.

When respondents were asked if they believed there was enough information available on the vaccine to decide on taking it, 43% said that they disagreed or were not sure.

More results from the survey analysis will be shared within the next month.

114 staff/contractor cases have been recorded since the pandemic emerged, all of which have now recovered. There are no active cases currently.

On March 1, the Alameda County Health Officer issued a mandatory testing order for all ACSO employees who work at SRJ after multiple failures from ACSO to comply with Public Health’s recommendation to test 100% of staff per month or 25% of staff per week.

The compliance rate in each 14-day testing block is outlined below.

ACSO provided its second mandatory testing report to the Public Health Dept. on May 12, which detailed the progress they have made during the months of March and April. The compliance rate has dropped by nearly 20% since the first testing block.

The report also states that ACSO is sending warning letters to staff who have failed to comply. The first round of letters went out earlier this month. Capt. Luckett-Fahimi stated, “On May 7, I sent warning letters to 92 employees found to be out of compliance with the Public Health Officers order (during the 3/29 – 4/10 testing period). The intent of the Sheriff’s Office is to first warn employees of their non-compliance. The Sheriff has made it clear to staff that subsequent failures to comply may result in administrative and/or criminal penalties.”

However, when pressed on the specific disciplinary actions that would be taken, such as suspension or loss of pay, Capt. Luckett-Fahimi said “we haven’t decided what the process will be for those who don’t take the second test.”

Further, the warning letters do not state that one’s employment is contingent upon their compliance with the health order.

Community members raised concerns about the falling compliance rate and ACSO’s lack of stringent administrative penalties to hold their employees accountable. In contrast, under CDCR’s mandatory testing program, which went into effect in late December, CDCR staff members’ who failed to comply are not permitted to enter the institution and are placed on approved dock (without pay) until they comply.

It is important to note that the while the Public Health Dept. has issued the health order, the department is not an enforcement agency and hence is not in the position to hold ACSO staff accountable for violating the order. ACSO itself is the enforcement agency in this case.

Further, the health order only applies to ACSO staff who work at SRJ and not Wellpath’s medical staff assigned to the jail or other contractors. When we questioned if Wellpath would consider implementing a surveillance testing requirement for their employees that mirrors the Public Health Dept.’s order, Mike Durbin, the Health Services Administrator, stated that they have no plans to do so. This is despite the fact that as of April 23, only 106 out of 135 full-time medical staff at the jail consented to taking a vaccine.

Since May 11, approximately 543 tests have been administered, of which 44 are pending results. Approximately 27% of the jail was tested in the last two weeks.

As of April 23, we reported that the test refusal rate was 43% for new books and 88% for expanded testing (conducted for patients with medical vulnerabilities, residents in open air units, and kitchen or laundry workers).

The jail population has been fairly constant over the last few weeks, but has been on an upward trajectory since April 2020. Currently, there are 2170 people in custody.

Mike Brady, an independent consultant with Sabot Consulting which conducts periodic spot checks at SRJ, noted the lack of social distancing and overcrowding in the jail during his fifth and sixth spot checks earlier this year. He also pointed out the significance of the Humphrey decision issued in March 2021 on SRJ’s population size. In re: Kenneth Humphrey, the CA Supreme Court stated that it is unconstitutional to restrict an arrestee’s freedom from imprisonment based on their ability to afford bail.

In response to the Supreme Court opinion, Brady wrote, “Following the mandate of the California Supreme Court should go a long way to reduce the inmate population in the SRJ… A smaller SRJ population will, on the natural, make it easier to follow the CDC guidelines on social distancing and space for medical isolation and medical quarantines.”

Brady has repeatedly urged the District Attorney, ACSO and Probation Dept. to find ways to control the rising population.

Officer Dawal stated that this request would require CDC Risk Factors to be included in the report that the Probation Dept. provides to the Judicial Officer for pre-arraignment release and release at arraignment. Since an arrestee’s date of birth is already included in the pre-trial report, Dawal stated that the first component of Brady’s recommendation has already been met.

Officer Dawal expressed interest in incorporating medical risk factors into release recommendations if it is provided by ACSO, which collects and holds residents’ medical records. ACSO stated that they would “explore it as an option.”

While the Probation Dept.’s Deputy Chief has made an inquiry to ACSO about accessing information on an arrestee’s medical vulnerabilities, ACSO responded saying that this information is not available at the time of completing the pre-trial report. Commander Sanchez argued that ACSO is not supposed to release any medical information due to privacy laws.

“If information was self-disclosed by the person, that certainly could be included as a mitigating factor,” said Officer Dawal.

Between May 11 – May 24, a total of 8 housing pods were quarantined. Currently, there is one housing pod quarantined, also undergoing serial testing.

All of the total housing pods were quarantined for the second time in the last two months, or re-quarantined since the pandemic started.

Four housing pods were quarantined and then released during this period of time.

ACSO states that all releases are done after the index case tests negative. The projected release dates are usually 14 days after the unit begins quarantine.

HU 6D was quarantined on May 14 and is currently on “yellow medical monitoring” due to a patient testing positive for COVID-19. It is currently undergoing serial testing. (Last released from quarantine on Dec. 30, 2020.)