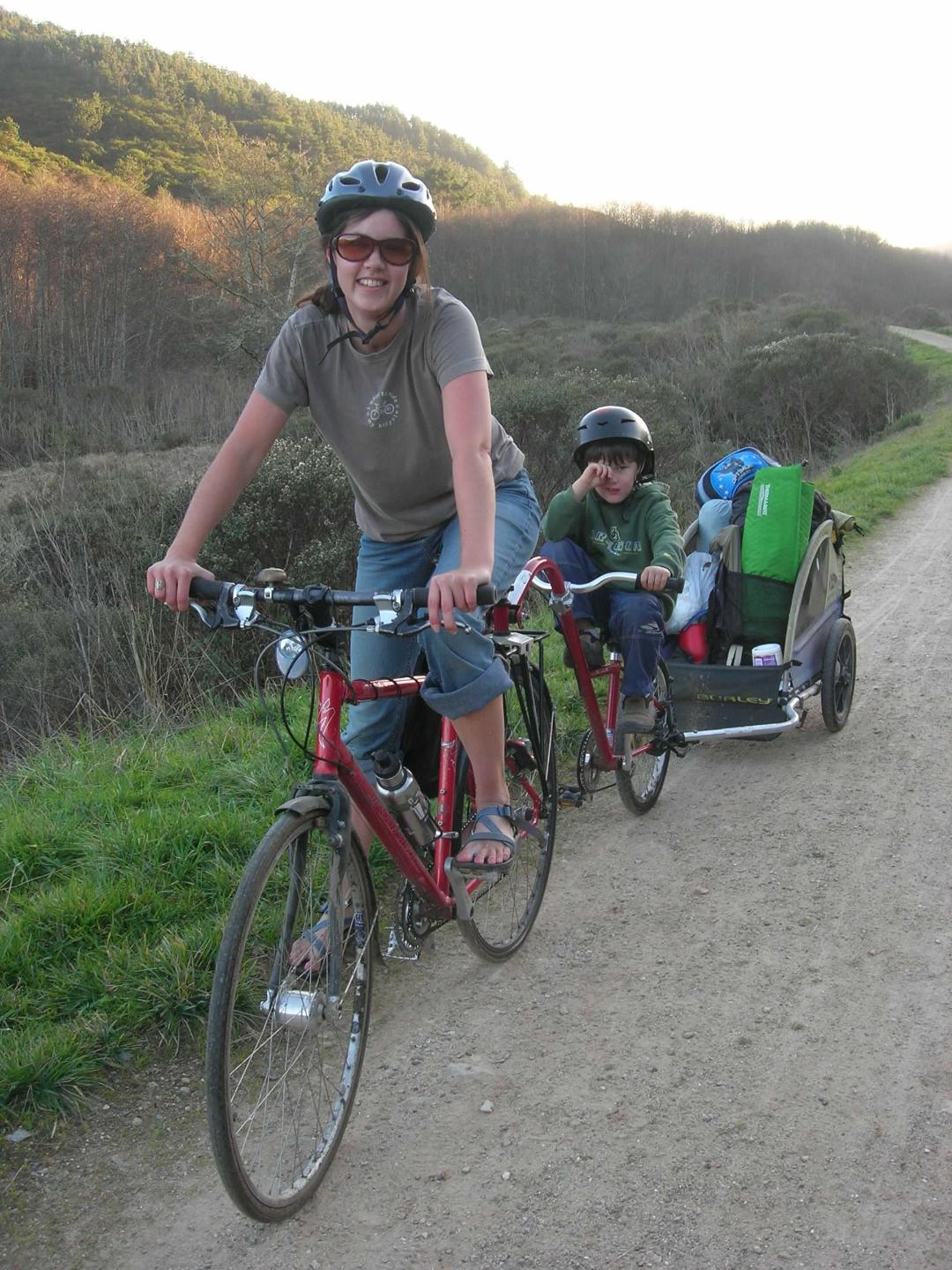 Shelley grew up in Reston, Virginia, a small town outside ofWashington, DC that was built as a planned community to include bicycling. Sherecalls carting her much younger sister around town on the back of her bike. That experience provided her with practice carting a little one around by bike years before she had her own son.

She moved to Davis in 2004 to pursue a doctorate degree inenvironmental history. She was delighted to find a bicycle-friendly communitylike the one she grew up in. She settled in West Davis and made it a habit of walking or bike riding to campus and around town.

In 2006, Shelley found herself 41 weeks pregnant with a babythat was a week overdue. She rode her bike to her checkup like she’d been doingthroughout the pregnancy. Only catch? They decided to induce labor at that appointment, which meant that Shelley technically rode her bike to deliver her baby.

Once her son Alden arrived, Shelley quickly added him intoher bike riding lifestyle. She started with a baby trailer then added on a tagalong.Alden started riding at the early age of two and progressed quickly to a full-size bike by the end of his kindergarten year. He rode alongside Shelley to and from all activities. In fact, they used their bikes so much to get around town that

she would see her car parked on the street outside her home and be surprised to remember that she owned it. That led to the decision to sell her car in 2011 when Alden was four years old and live a car-free lifestyle. That same year she completed her Ph.D. program and started working as an environmental historian with the California History-Social Science Project at UC Davis.

That car-free lifestyle takes some creativity, ingenuity,and a little help from friends and neighbors. Shelley outfitted her and Alden’sbikes with racks and panniers, allowing them to cart items, including groceries, gear for Little League games, and Alden’s guitar. They use a bike trailer and even sometimes a baby stroller to cart home larger items, including their living Christmas tree. On the rare occasion when an item is way too large to be transported by bike, a friendly neighbor with a car will offer a hand. For athletic events out of town, they usually carpool with teammates. For work meetings that Shelley has to attend outside of Davis, she takes Amtrak train and then walks or rides her bike (which Amtrak thankfully allows on board) to the meeting location once she arrives at her destination town. A few times a year, she rents a car so that she and Alden can take a camping or other road trip vacation.

When Shelley bike rides daily, it’s a form oftransportation, but it’s also a statement. Environmental consciousness hasalways been a big part of Shelley’s personality and now it’s her chosen career. Spending her life focusing on environmental issues and then adding unnecessarily to the impact of climate change would feel incongruent to her. Thus, helping to protect the planet has always been a part of her decision to be car free.

Thankfully, she also enjoys the outdoors and being on twowheels. And now she gets to pass that onto her 14-year old son, who has grownup in a car-free household and doesn’t turn to the car as a knee-jerk option for transportation. And doesn’t that seem fitting for a kid whose mother rode her bike to deliver him? Maybe Shelley’s destiny to spend her life on two wheels has now become an inherited one.

This article was written by Lisa Montanaro, commissioned by The Bike Campaign. For more information about how to “Drive Less. Ride More.,” contact Maria Contreras Tebbutt at funmaria@sbcglobal.net or www.TheBikeCampaign.com