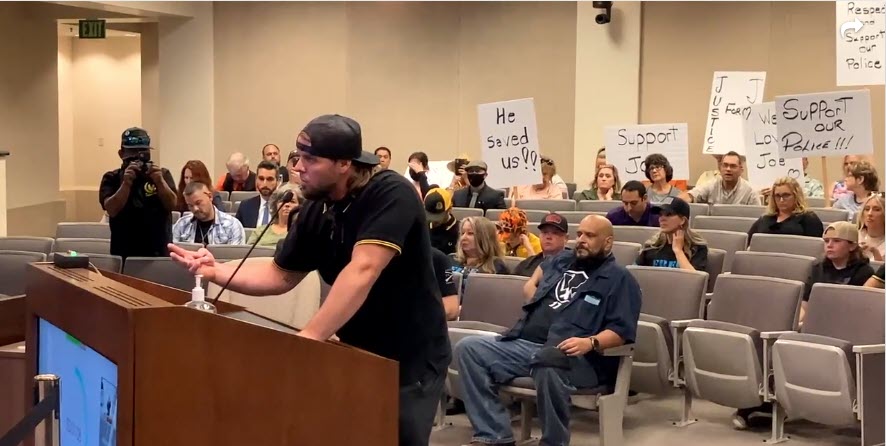 Modesto, CA – A few dozen members of the Proud Boys, a far-right group considered extremist, showed up at a local Modesto City Council meeting showing support for a police officer fired for his shooting of an unarmed man last December and to denounce the city’s police oversight board.

Sean Adams, a Proud Boy member, said, “You go and push a political agenda that divides the community and the left has created this atmosphere to promote hatred for police by pushing and hyping these false claims that all police are bad.

“So here we are tonight to let you know we have two options—incorporate the public that represents the Constitution and Bill of Rights or dismantle this oversight antifa committee,” Adams said.

He said that he has been in contact with “Constitutional lawyers” that are monitoring the actions of the panel “and we will go forward with subpoena if you guys continue to go forward with these divisive measures.”

The video from the meeting showed both sides clashing before, after and during the meeting.

Kyle Seever is the brother of Trevor Seever, who was killed by a former Modesto police officer.  The officer, Joseph Lamantia,  was reportedly fired from his job and charged with voluntary manslaughter

Remarkably, Seever was the FIFTH person shot by Lamantia and the fourth of them who died.

“This tragedy arises from the hiring and retention by the Modesto Police Department of Joseph Lamantia despite his demonstrative lack of judgment and record of excessive and deadly force,” attorney Robert Fores wrote in a lawsuit on behalf of Seever’s mother Darlene Ruiz filed in May.

“This is an extraordinary record of violence,” the claim continued.

According to published accounts, Seever was shot multiple times on the grounds of the Church of the Brethren on Woodland Avenue in west Modesto.  Lamantia was first to arrive at the scene following a 911 call from Seever’s sister, to report he might have a gun and had made vague threats against his family.  Seever, 29, was not armed when Lamantia arrived, it was Lamantia who rushed Seever, and twice ordered him on the ground before opening fire.

On Tuesday, Kyle Seever, after being interrupted and threatened by Proud Boys who had to be restrained by the police, called on an oversight board with subpoena power to be implemented in Modesto.

A Proud Boy added, “We are in a sad time…  What if (police) decide not to use any force to go after criminals.”  He said, “Unfortunately we can’t get parent reform to teach parents how to raise their kids properly so they follow the laws and don’t get in trouble.”

During the meeting both sides would clash with Mayor Sue Zwahlen, at one point warning members of the audience that they would clear the room if that conduct continued.  Police officers at the meeting attempted to keep order and the interim Police Chief Brandon Gillespie and an officer attempted to calm things down.

Adams noted that the committee to look into police reforms—which reportedly includes the sheriff and DA—is “one sided, comprised of only far left organizations” and lacked conservative representation. “We’ve tried to put in our application to go and join in to this round table (committee),” he said, “and we’ve been denied.”

According to the Modesto Bee, the members include the Modesto Police Officers Association, District Attorney Birgit Fladager, Sheriff Jeff Dirkse, the Chamber of Commerce, the NAACP, the ACLU, the Latino Community Roundtable, MoPride, the West Modesto Community Collaborative and the Stanislaus County Interfaith Council.

The Bee noted: “The committee is part of the City Council’s Forward Together initiative, which aims to improve the trust and relationship between the police and the community. The council recently approved and appointed members to the committee, which is expected to have its first meeting July 20.”

The Bee also reported there was “an escalating argument between right-wing group members and people who were carrying an “antifacist action” flag” and that the conflict at the council meeting spilled onto the streets after public comment ended.

The Proud Boys are considered by many, including the Anti-Defamation League, to be an extremist group.  The ADL describes the Proud Boys as an “unconventional strain of American right-wing extremism. While the group can be described as violent, nationalistic, Islamophobic, transphobic and misogynistic, its members represent a range of ethnic backgrounds, and its leaders vehemently protest any allegations of racism.”