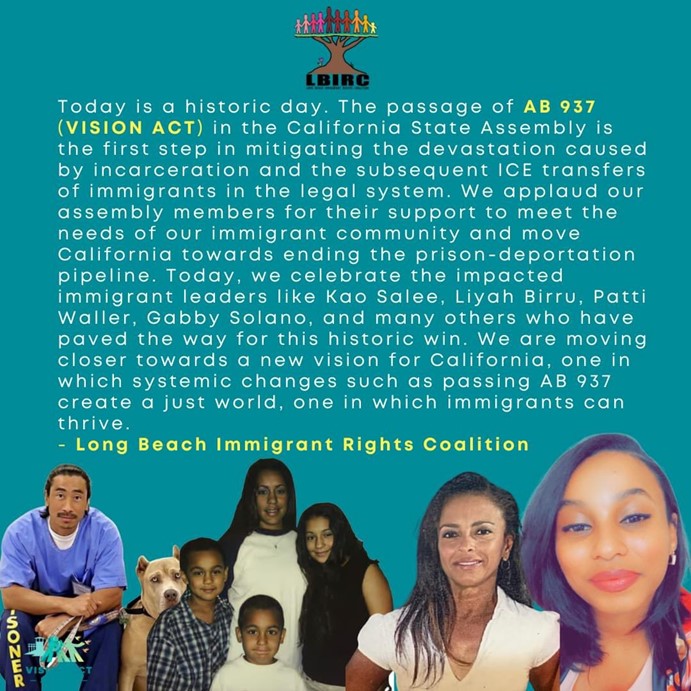 SACRAMENTO, CA – Legislation to end the “prison to ICE pipeline” was passed by the full California State Assembly here Thursday with the backing of a 90-organization coalition that hailed the passage as a “national model for addressing racial inequities at the intersection of mass incarceration and deportation.”

In the meantime, the bill will, claim supporters, help end what is called “double punishment for immigrant Californians and keep families together.”

AB 937 is expected to end the current practice of ICE picking up and again incarcerating immigrants just as they are about to be released from prison or jail. There have been many reports of family waiting for their loved one to exist a carceral facility only to discover they are now in the iron grip of ICE, to be held until deportation.

This, according to the coalition, includes “a person who has completed their sentence, been granted parole, had charges dropped, or been granted release by a judge.

In reaction to the VISION Act’s passage, the ICE Out of California coalition, which represents the bill’s sponsors, issued the following statement:

“We applaud the Assembly’s passage of the VISION Act…(it) is a victory for every community member who has endured the trauma of ICE transfers and raised their voice for justice. The VISION Act will end the double-punishment of community members who have done their time and earned release from jail or prison, yet face permanent family separation and deportation solely because of where they were born,” said ICE Out of California.

“Like any other Californian, they should be able return to their families, rebuild their lives, and contribute to our state’s collective success. It’s time to recognize that each incarcerated community member has loved ones who care for them and their own story and journey of transformation,” the group added.

The bill’s supporters have focused on what they call the “racism” in the system that has led to multiple incarceral heartbreaks for immigrant families, adding “It’s time to challenge the systemic racism that makes Black and brown immigrants more likely to be targeted, incarcerated, and deported to danger and possible death.”

“In a growing trend, stories of community members harmed by ICE transfers have sparked public outrage, including incarcerated firefighters Bounchan Keola and Kao Saelee, who were recently pardoned, but whose families were traumatized by their detention, and  “domestic violence survivors such as Liyah Birru and Gabby Solano.”

They cited a rally this week to protest the deportation of Le Lam, a Vietnamese refugee who faces an ICE check in next week.

It’s also a win, if OK’d by the Senate and signed by the governor, for taxpayers.

The Alliance for Boys and Men of Color estimates that transfers to ICE of people eligible for release from local jails alone cost $7.3 million dollars in 2018 to 2019.

The coalition  notes “People in prison and detention are disproportionately Black and Brown due to structural racism and are often survivors of abuse. Meanwhile, while only seven percent of non-citizens in the U.S. are Black, Black immigrants made up 20 percent of people facing deportation on criminal grounds in the U.S. in 2016.

The coalition insists that those deported can face mistreatment and death – one study found at least 138 people have been killed after being deported from the U.S. to El Salvador since 2013.

“(We) applaud the passage of AB 937. As an organization whose members have endured being transferred from prison to ICE, the passage of this legislation means justice for them and their families. The time to keep families together is now,” said the Asian Prisoner Support Committee.

“For too long, our community has been terrorized by ICE. After working decades on their rehabilitation inside prison, our community members endure the fear of continued punishment in the form of ICE detention and deportation. The passage of AB 937 puts this practice of terrorizing our community  to a stop. It affirms the state’s commitment to immigrant and refugee families like the ones we serve,” the committee added.

“The passage of AB 937…is a first step in mitigating the devastation cause by incarceration and subsequent ICE transfers of immigrants in the legal system. We applaud our assembly members for their support to meet the need of our immigrant community and move California towards ending the prison-deportation pipeline,” said the Long Beach Immigrant Rights Coalition.

“Today, we celebrate the impacted immigrant leaders like Kao Salee, Liyah Birru, Patti Waller, Gabby Solano and many others who have pave the way for this historic win. We are moving closer towards a new vision for California, one in which systemic changes such as passing  AB 937 create a just world, one in which immigrants can thrive,” the LBIRC added.