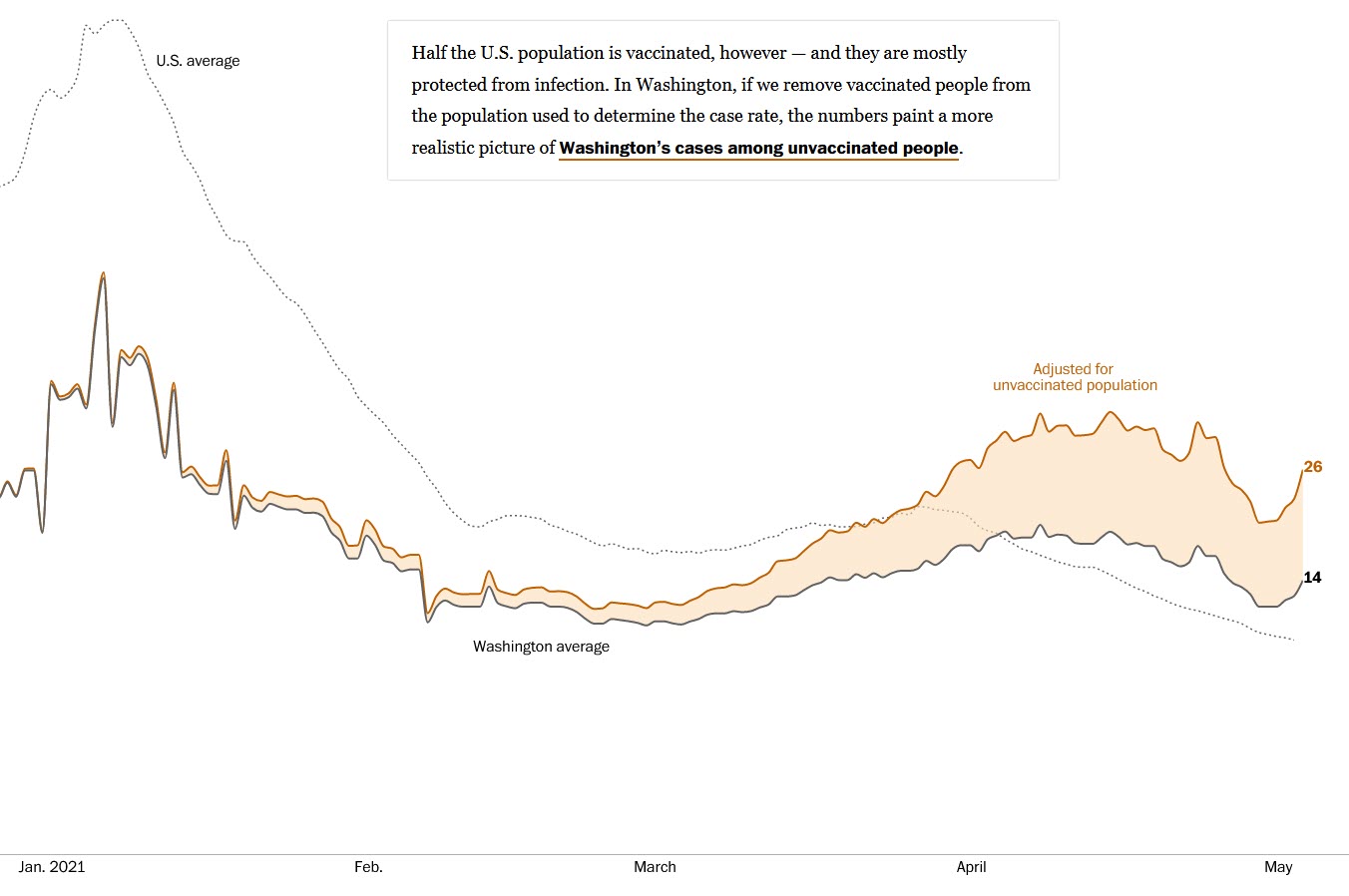 It is hard to remember, but back in January the COVID pandemic was spiraling out of control with more than 200,000 new cases a day.  Yesterday that number was less than 14,000 and, over the past week, we have averaged about 14,000 or just about 90,000 per week.

That rate has fallen a lot faster than all 22 models tracked by the CDC actually predicted.  And it has occurred with only about 40 percent of the overall population fully vaccinated, although more than half of those over 18 are vaccinated nationwide.

One of the interesting things about COVID has been how unknown it was at the start, and there is a lot of conflicting information.

One thing we have learned is that, while there may be a few cases of reinfection, some of those may be the result of false testing and other artifacts of testing—rather than true cases where someone was infected, fought off the infection, and then got reinfected.

At this point they have not seen a significant amount of reinfection within groups of people who have built a natural immunity.

In addition, they have seen only a few cases of people who have been infected after being fully vaccinated.  If that holds—granted we have not gotten to see this over time—it could mean that

people vaccinated may not need to have additional boosters.

The death rate as well as the hospitalization rate for COVID cases has plummeted.

On June 1, now a week ago, I found this rather interesting article from Colorado Public Radio.

At that time, they found about 500 people in Colorado who were still hospitalized from COVID.  Nearly all of them were unvaccinated.

Not only that, but the people they are seeing are increasingly young.

“A lot of the patients that we’re seeing now are young, thirties to forties and can be critically ill,” said Dr. Steve Brizendine.

“Hospitalization numbers show the virus spreading rapidly among the unvaccinated,” CPR reports.  “In the week of May 23, almost 19 percent of hospitalized patients were between the ages of newborn and 39. That’s up from Nov. 22 when that age group made up just 12 percent of the patient caseload.”

That study found that the virus is still spreading as fast among the unvaccinated as it did during last winter’s surge.

That suggests that the reason for the precipitous fall is almost exclusively vaccination.  The article finds “that rosy picture hides the strength of the pandemic among unvaccinated people.

It is probably not shocking that vaccination is driving the plunge in cases.  But at the same time, the rate for the unvaccinated population has increased since it reached a low in March.  They are baselining the figures to January 24, however, not the peak of the pandemic a few weeks earlier.

All of this comes around the time when many states are dropping mask restrictions altogether and the CDC has advised that vaccinated people do not need to wear masks inside.  The concern is that unvaccinated people will also stop wearing masks and that could cause a renewed spike.  It turns out if you look at the charts from the Washington Post that is true, however, the numbers are being masked by the drop in cases by the vaccinated public.

All of this is now relatively good news however.  It suggests the vaccines are working.  That life can return to normal.  But it seems unvaccinated people are risking unnecessary infection, hospitalization and even death—even among the relatively young and healthy.

9 thoughts on “Commentary: As COVID Cases Drop There Appears to Be Some Good News…”