The City continues to advance towards a new way of delivering public safety in Davis. The pace of that progress has been a point of contention for some in our community. The city council meeting of June 22nd was a testament to the amount of passion our community can mobilize towards transformative city topics. For this topic, it has been clear from the beginning that this is not a fringe issue here or nationally. It is also not in dispute that this can have positive life changing impacts if done correctly. What has been a source of frustration is the disconnect between the community and city council’s perception of progress towards this common goal.

I, as many others, was deeply disturbed at the image of George Floyd’s murder. As I listen to the frustration from public commenters, I hear the sense of urgency to enact immediate change.  In Davis there were specific requests for defunding the police and/or redirecting resources to address other needs, such as mental health or homelessness, enacting the 8 can’t wait policies and moving mental health and homeless services out of the police department.

During this period, many cities across the country announced a commitment to decrease their police budgets and move resources to mental health and other social services. A year later those cities show little progress in decreasing those budgets. We as a council took a more measured approach. We realized that we did not know what the depth of need for services for mental health and the unhoused population were, but knew they were growing.  We knew we faced many of the challenges facing other cities as well. We did not know what number of dollars or reduction in armed

personnel would rectify these problems. Blindly cutting the police budget would only feel good for a short while, grab a headline, and not make any real change.

Had we followed the calls for cutting the budget in June of 2020, enacted the one remaining policy we did not meet of the 8 can’t wait campaign, moved homeless service out of the police department, and added more mental health responders, we would have been done by now, but I do not believe we would have made deep change. Instead, we engaged in a process aimed at laying down lasting structure and which would give use benchmarks to make course corrections if needed. We engaged our commissions, community, and reached out to learn best practices. This process takes time.

As we look over the timeline below it is important to remember this was done in the middle of a pandemic when much of the staff was working from home and dealing with a public health crisis. From that perspective it is amazing we accomplished this much and even more so that we have done much more than was initially asked.

May 25, 2020 – In the aftermath of the murder of George Floyd at the hands of Minneapolis police officers, many communities across the country were calling to “defund the

June 16, 2020 – At the City Council meeting during the final approval of the City’s annual budget, the City Council indicated considering potential structuring changes for or city involvement in social services, including mental health services, and learning about best practices to improve law enforcement. The Council passed the following motion: Direct staff to develop a proposed outreach plan/work plan related to identifying and funding community health and safety improvements. Specifically, staff will seek input from the Police Accountability, Human Relations and Social Services commissions, as well as the Independent Police Auditor, and Yolo County. The focus shall include preventative solutions and consideration of systems of interaction between police and community and will inform the upcoming Police Department strategic plan.

August 11 and 30, September 23, October 15, and November 18, 2020 –The joint subcommittee of these commissions met to discuss issues around law enforcement, mental health, racism, substance abuse, and related topics. In addition, each of the three commissions held separate discussions/updates at their individual commission meetings throughout the summer and the fall. These meetings generated much public comment.

December 1, 2020 – The joint subcommittee produced a report that was presented to council on. In this report nine recommendations were put forward to address reimagining of public safety in Davis.

December 15, 2020 –, Council directed staff to review the report and return with feedback and responses to the nine recommendations made by the joint subcommittee.

April 6, 2021 – Council received the staff response to the temporary joint subcommittee; gave direction for implementing recommendation 1-8, utilizing data to help inform future policy and organization decisions;  formed two subcommittees to Determine whether City services currently assigned to the Police Department should be assigned to other City departments and ways to identify and meet needs around mental health and services for the unhoused,

Today – During the last budget discussion, $790,000 in placeholder funds from the American Rescue Plan were set aside to implement public-safety reform in the future. A concern raised by many at this meeting was the continual rise of the police budget.  There are several reasons for this. First and foremost is that all budgets tend to rise over time even if no new services are added. This is due to pre-negotiated cost of living adjustments, changes to benefits and other items not in our control. If we look at the police budget, which has not increased staff per capita since 1990 levels, we see that it maintains a steady percent of both the total and more relevantly the general fund budget.  Accounting practice changes this year and additions requested as part of the 9 recommendations from the joint subcommittee exaggerated the look of an increase in this year’s police budget. Again, because we have not determined what or if an amount of decrease would be beneficial, we have not assigned a specific decrease to the police budget overall. It also should be noted that a specific decrease to the police budget was not part of the nine recommendations, which is what has been worked out as our agreed roadmap going forward as a community. 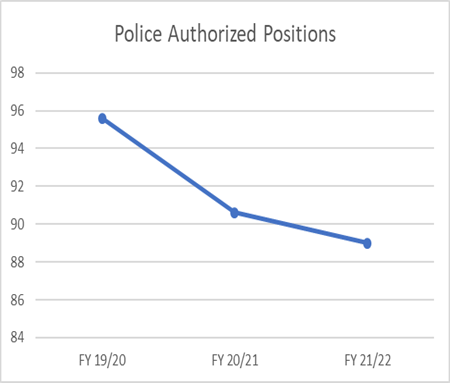 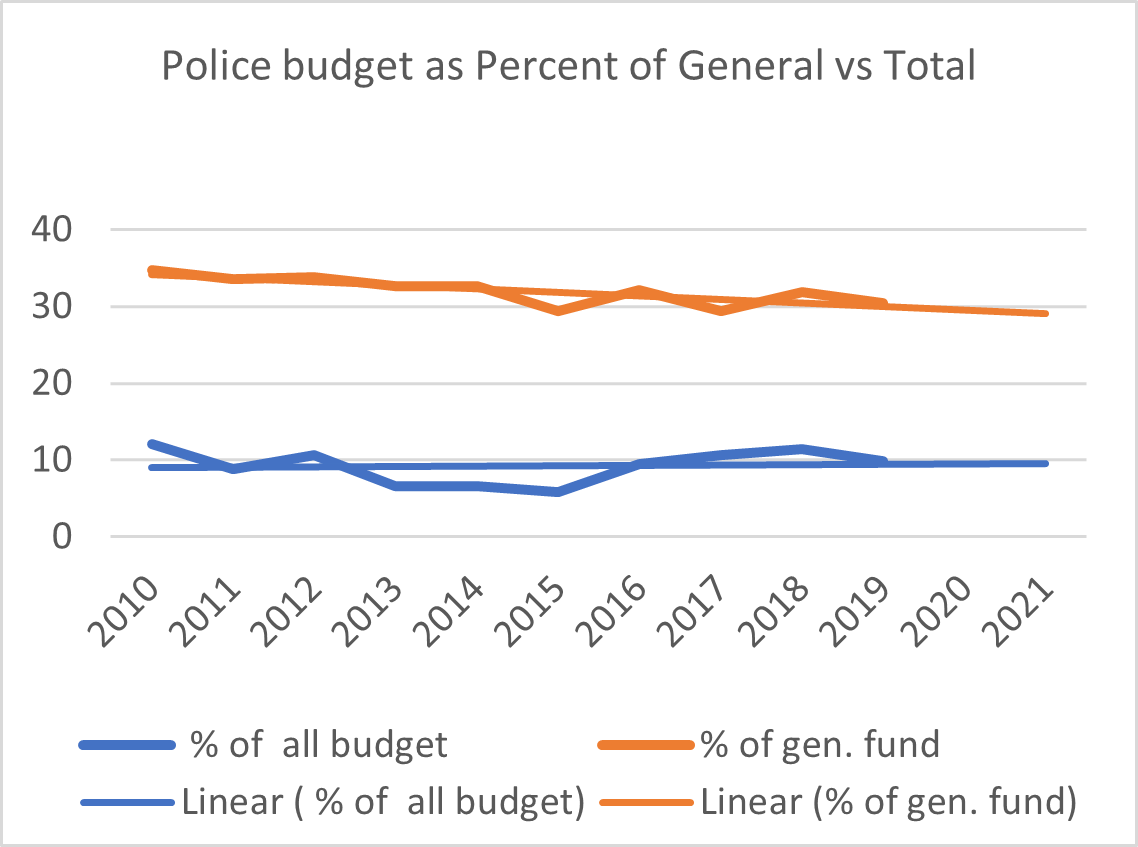 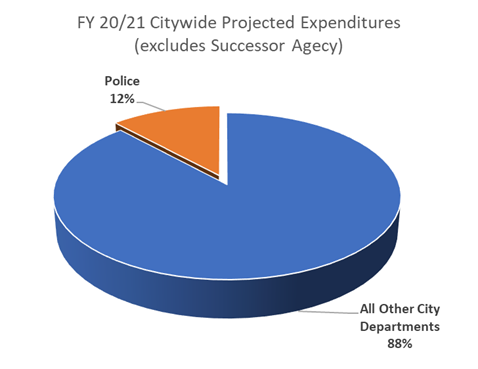 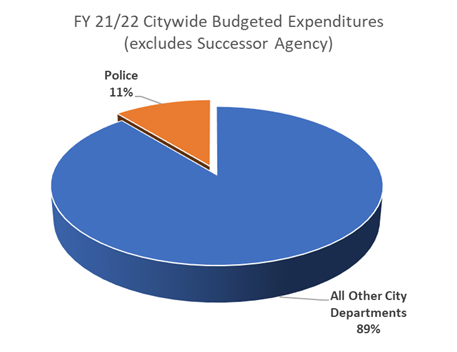 It is disheartening to see the continued rhetoric that asserts we are doing nothing. That we are ignoring the 9 recommendations. That we did nothing during the last budget process and nothing again this budget process. That we only show up at rallies but do not really care. I am appreciative of constructive criticism. I value the iterative process of reassessing as we go forward. That process requires communication and collaboration and looking for genuine ways to assess what has been done to make the best improvement. An example of what happens when collaboration breaks down is the heated protest that arose at the June 15th city council meeting that resulted in protesters loudly banging on the chamber side doors and damaging door handles. This protest resulted from the belief that regardless of the calls to reduce the police budget we had added two new officer positions. This miscommunication could have been cleared up if community activist had asked questions before rallying people with the narrative that council was duplicitous. I have spent a good deal of my life participating in protest. I believe in the value and sometimes necessity of causing people to move out of their comfort zone and take note. I also understand the power of mixing that protest with negotiation and knowing when a hand is over played.

The ability of a community to move through difficult periods while maintaining a positive relationship is especially important to the outcome of a common goal. Being partners in bringing about innovative changes does not mean there will be agreement on all items, but it does mean keeping the opportunity to collaborate open and accept that there will be differences that will require work to bridged.

Gloria Partida is the Mayor of Davis.

5 thoughts on “Commentary: Davis Mayor on Reimagining Policing and the Police Budget”