Davis, CA – Despite an overwhelming number of citizens supporting changes to policing, the council largely passed the budget as proposed on Tuesday night, leaving some of the more heavy lifting to a later point.

As one typical example put it: “I’m calling to strongly oppose increasing funding to the police department.  Instead I would like to see more money going toward a new office of public safety that can more adequately address mental health circumstances as they arrive and keep the residents of the city of Davis safe.”

A 75-year-old resident called in to say, “The reason I’m calling is to discourage the city council from increasing funding for police.

“We need less armed enforcement officers running around the city and more people trained in conflict resolution without the threat of weapons to try to maintain.

“The city of Davis should take a lead in looking for peaceful conflict resolution which means do not bring weapons to every little event that occurs that shouldn’t need a weapon.”

He said, “We could do this in the name of Natalie Corona, seeking peace rather than having armed enforcement officers that just encourage unstable, unhinged, disillusioned people to see ways to grab attention—that’s just terrible.

“If we seek peace rather than seek the strongest weapons and the most weapons to try to keep order, we’ll have a more peaceful city.”

At least five of the public commenters explicitly threatened not to vote for any councilmembers who voted to adopt the budget as currently conceived.

Joanna called and said that Davis is failing “to imagine anything but the same deadly status quo that benefits white supremacy and real estate capital.”  She said, “Your proposed budget represents an investment in safety for the white, housed, and wealthy.  It’s a massive middle finger to the historical uprising and the folks we marched with.

“We know our Black and Brown siblings are disproportionately represented among those living outside.”  She asked the city to move all three homeless outreach positions out of the police department, not just two.

Catherine Hagen criticized the city for failing to hire a single person “to create novel solutions for community safety.”  She noted a Vanguard article quoting the chief saying “in almost all respects, the Davis police department really is a community safety department.”

She said, “If you really believe this, city council, then why don’t you have police officers out doing tree trimming?  Because that’s a dumb idea.

“The point here is to remind you that there are plenty of professionals outside the police department with expertise and career commitments dedicated to community safety,” she added.  “These people could do so much more if the city committed budget resources to support them.”

Todd Edelman added, “Equity is a process, not a goal. We fight for it, forever and always.

“The fight for equity is recognizing and adopting—not only adapting—best practice from other communities.”

Dillan Horton, Chair of the Police Accountability Committee, expressed concern and frustration “at the growing gap between the city council’s verbal commitments in support of the nine reimagining policing recommendations and the city’s actions so far.

“A year ago during the 2020 budget process we were told that the council at the time supported reform but that the budget was essentially fully cooked and that we’d have to wait until the next budget discussion,” he explained. “I think we have all been around Davis politics long enough to know of examples where our community faced a difficult social issue and a forum was quickly organized for people to vent their frustrations and then leaders in our community tried to move us on from that subject as quickly as possible so we can ‘get back to normal.’”

He explained, “ I am determined, along with a lot of other people, that our city not follow the usual pattern on this issue. The only way to break out from that pattern is for our elected representatives to push and lead to make meaningful change happen.”

On April 6, he said, “Council had an opportunity that evening to reiterate the expectation that they laid out in December and make it clear to the public that they understood that this document was substantively different and smaller in scope than the nine recommendations. The council could’ve acted to add in what was missing, instead y’all approved work on recommendations that the temporary joint subcommittee never asked for, seeming to disregard and partially disrespect the months-long work of the TJS.

“So it’s really beyond frustrating, a year later, to hear our city leaders tell us what we were told a year ago, that more time is needed and really this might be too complicated to do in the way that the community envisions,” he added.

Morgan Poindexter, in a comment sent to the Vanguard, noted, “The Police Budget is continuing to increase, even accounting for inflation. We analyzed the last 10 years of DPD budgets that were approved (adopted) by City Council and found that despite a small dip in funding due to the COVID-19 crisis, the police budget increases every year consistently.

“This two-year budget is no exception. And inflation does not account for these increases at all. When comparing the adopted budgets in today’s dollars (red line), the trend is clear. Police continue to get more and more money,” she said. 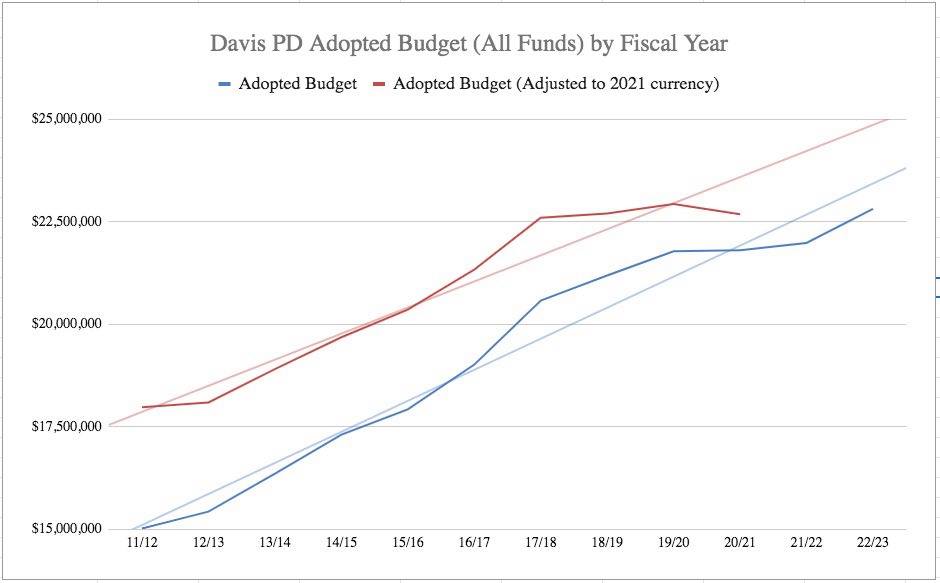 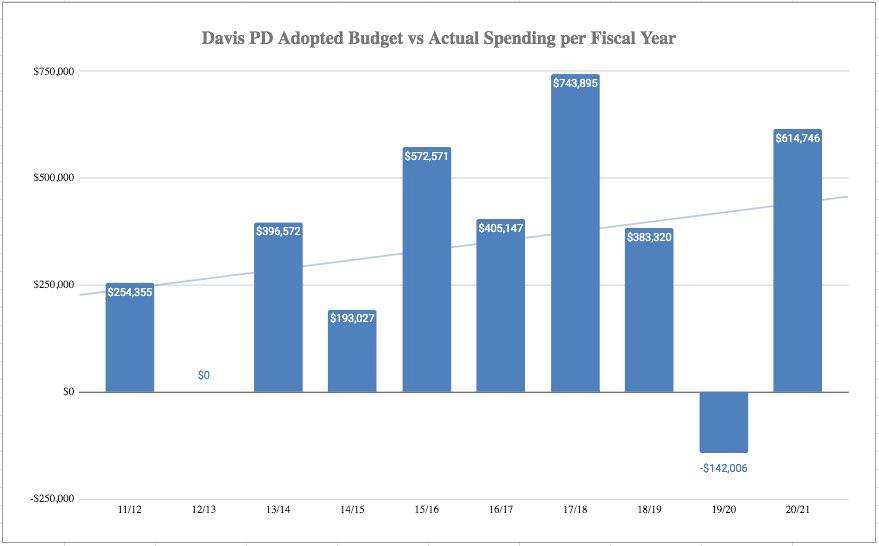 Councilmember Will Arnold pointed out where the budget was in comparison to the fears that existed a year ago with economic shutdown and the pandemic.

“I’m proud of where we are, I’m proud of this budget and I’m excited for where we’re going as a community,” he said.  “We’re stepping up to do more on (public safety).  We’re working with the community to examine our policies, examine our assumptions about how we do community safety, we’re leaning into that.”

Vice-Mayor Lucas Frerichs noted that nearly $800,000 of ARP [American Rescue Program] money would go toward ‘reimagining public safety.’  Those dollars will be spent on a management level position, plus a public safety data analyst, “those are both to be potentially relocated in the city manager’s office.”

But he said, “There is yet more to come.”

Mayor Gloria Partida understood some of the frustrations of the community.

“This process has been slow,” she said, in part because they engaged the commissions and are listening to the community.

She noted that, while the comments this evening were one-sided, “The people who didn’t call in this evening, there are people who are concerned about money being taken away from the police department.  It is important that we are balanced in how we go forward here.”

City Manager Mike Webb noted that, for any departments with a general fund funding source, “the budgets go up even though operations and staffing levels have not changed.”

He explained, “In large part this was do to the GASB [Government Accounting Standards Board] principles and the best accounting practices that we need to adhere to in our budget documents.”

Webb argued that any increases were due “to changes in accounting treatments and those MOU cost allocations,” not staffing increases.