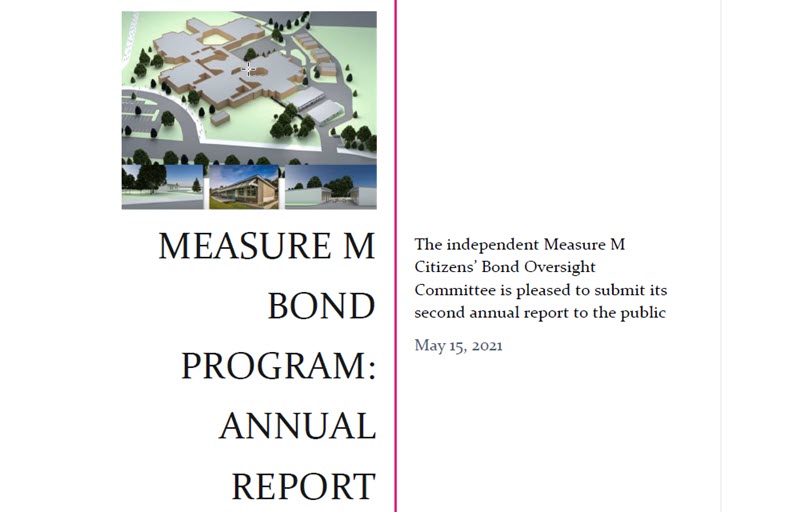 Davis, CA – Last December, the Measure M Citizen’s Oversight Committee unanimously backed a recommendation conveyed in a letter from Chair Donna Neville, alleging that the school district is in violation of the law for failing to repay loans made from the Measure M fund to the district General Fund without paying interest on those loans as required by state law.

“The law here is clear. In attempting to address this issue with the district, I consulted with more than a half dozen legal colleagues who work in public finance and bond compliance, and they all confirmed that interest must be paid on these loans,” Neville said in the letter that was sent to the district.

“Over the life of the Measure M program this failure to repay the loans with interest could amount to as much a half a million dollars in lost interest [for the Building Fund], depending on the amounts borrowed, interest rates, and the length of the loans,” she continued. “This is not only illegal; it is a betrayal of the voters’ trust.”

In its second annual report delivered to the District in May, the Measure M Citizens’ Bond Oversight Committee included a statement that the practice has continued.

The committee, whose membership has changed since the Neville letter, states, “We recognize that these loans are permitted by the Education Code, but we believe that the District must repay these loans with interest.”

They continue, saying that “case law dictates that the District must make the Building Fund whole upon repayment of these loans by paying the amount of interest that money would have earned if it had remained in the Building Fund.”

Last December, then-District Public Information Officer Maria Clayton told the Vanguard, “After careful consideration and discussion, including the engagement and consultation of legal counsel, the District’s position is described in this memo, which is titled Board Policy on Interfund Borrowing.”

According to the referenced memo dated September 30 from Superintendent John Bowes, the Citizens’ Oversight Committee “requested that the Board of Education consider whether it should amend Board Policy No. 3110 (Transfer of Funds) to prohibit temporary borrowing of Measure M bond proceeds, and if not, whether it should amend the Policy to require the transfer of an amount equal to interest when the borrowing is repaid.”

Bowes said, after conferring with bond counsel and municipal advisor, “we determined not to recommend any changes to BP 3110 at this time.”

In their view, “The advice we received is that our temporary borrowing practices are not prohibited by law and are consistent with Generally Accepted Accounting Principles (‘GAAP’), rules of the Governmental Accounting Standards Board (‘GASB’), and the aforementioned CSAM and SACS.”

Instead, they argue, “Education Code section 42603 gives broad latitude to a school district governing board to temporarily transfer funds from one fund or account to another under specified conditions.”

They note, “Interfund borrowing is distinguished in school district accounting from an interfund transfer, which describes a flow of assets from one fund to another without equivalent flow of assets in return and without a requirement for repayment.”

The Oversight Committee, made up of members of the public, disagrees.

They have repeatedly requested that the DJUSD governing board “modify current board policy to require the payment of interest” but the board has thus far “failed to do so.”

“The Official Statement for the Measure M bonds plainly indicates that all of the principal as well as interest earned on that principal must be used for Measure M purposes,” they write.  Thus they believe, “When the District makes interest free loans from the fund it fails to honor this commitment and it diminishes the amount of interest earned on the principal. Further, numerous California cases stand for the general legal principle that where a fund is entitled to retain interest, it follows that a loan made from that fund must be repaid with interest.”

Furthermore they write, “The District’s refusal to modify its current policy has, so far, deprived the Measure M Building Fund of as much as $200,000 in interest that it would have otherwise earned.”

While the Oversight Committee membership has changed since last December, they have recently stated that they continue to “stand by our original recommendation that the board should modify current board policy to require the payment of interest. This would bring the District into line with the guidance provided by the Fiscal Crisis Management Assistance Team to all school districts throughout California and with the practices of other public agencies.”

They conclude: “By not paying interest, the District not only reduces the amount of funding available for Measure M projects, but it also exposes the District to legal liability.”