“Software” – not just the hardware of our physical body – is essential for human perception and action.

One example: people born with congenital cataracts were blind because of a physical impediment–an opaque lens in their eyeball (hardware). When medical science invented the cataract operation, surgeons thought they would become sighted once the operation removed that lens.

Yet…when they had no more physical, hardware problems, these people still couldn’t see. They literally could not distinguish between a circle and a square on a plain background.

When the doctors advised them to use their gaze as they had been using their touch, to “feel” an object visually, they were finally able to make the distinction. They needed to know how to move their eyes (“software”) before they were sighted. Most sighted adults do this so speedily and automatically they aren’t aware it’s happening…but it is.

In the brain, the visual cortex receives only 10 percent of its input from the optical nerve, the remaining 90% are connected to language and memory. Normally sighted people construct their vision of the world based on lots of stored

The “cured” congenital cataract sufferers almost all found the effort to locate and remember patterns of gazing too much trouble, and largely returned to the life they were used to, as blind people.

The story of the congenital cataract sufferers also demonstrates that prejudging–prejudice–is one of the foundations of human perception, and a big time saver. Trying to find someone without prejudice is difficult, if not impossible.

That could explain the psychological experiments that confirm 90 percent of the population has some unconscious racial bias.

The problem with human software, indeed with all software, is that it tends to have bugs, making it susceptible to deception. For vision, our susceptibility to optical illusions is one such bug.

Even inanimate, computer software has some bugs that occur so frequently that they have names–“race condition” for an infinite processing loop like dividing by zero, a “memory leak” for software that consumes more and more memory until the computer crashes.

These are bad programming mistakes, and good programmers catch and handle such errors before they crash the computer. Evolution is still working on a few of these for the living.

There’s even bad software in the animal kingdom. Stuart McMillen’s Supernormal Stimulus comic reminds us that there’s literally no limit to a peahen’s appetite for large peacock tails. 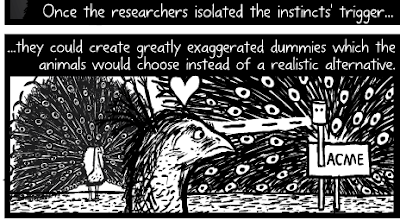 Research proved peahens would prefer the exaggerated dummies to real peacocks as long as the tail was bigger.

In addition to optical illusions, humans can also encounter limitations to other software. For example, humans can drink refined sugar all day long without ever receiving the chemical or neurological messages that let us know we have consumed enough calories.

Traditionally, humans have called such infinite appetites “sin,” and the seven deadly sins (pride, wrath, greed, gluttony, envy, sloth and lust) are certainly behaviors that have the potential distort sensible needs. We’re vulnerable, in varying degrees, to types of addiction that do not always serve us.

Political issue advocates and marketers often take advantage of supernormal appetites for things like safety, health, and fairness. Who can have too much safety, or health, or fairness?

Yet too much safety insulates us from a true experience of the world as it is, a surplus of health is impossible to achieve with aging bodies, and a surplus of fairness would imply the world itself could be fair. There might be exceptional cases that satisfy such appetites, but just because someone wins does not mean buying a lottery ticket is a viable retirement strategy.

Fairness, or deserving is particularly thorny as a supernormal stimulus. We assume good behavior preceded good outcomes, and people who are ill, or out of favor probably deserved that because they were bad people.

Our modern understanding of illness tells us sick people are not necessarily bad people, yet despite that understanding the U.S.’ carceral state still punishes drug addicts rather than treating them medically. The “war on drugs” treats addicts as enemies.

This predisposition to believe people deserve their circumstances is why cutting welfare has any appeal. Why those poor people are cheats! They would just squander the money if they got it!

This conclusion is parroted by those who profit from others’ distress, despite studies that disclose income guaranteed poor people gets spent on necessities, not wild parties.

Darwin’s observed evolution can make progress, but slowly, and through the death of those who do not adapt to life as it is in their niche.

This is unfortunate for those of us who would like to change our minds rather than die, but all too often people would rather die than change their minds.

Share:
Previous : Adachi Project Releases ‘From Inside’ – 3rd in a Series Dedicated to Psychological Impact of Being Caught in the County Jail System during COVID
Next : San Quentin Officials Blame Headquarters, Health Services for COVID Missteps