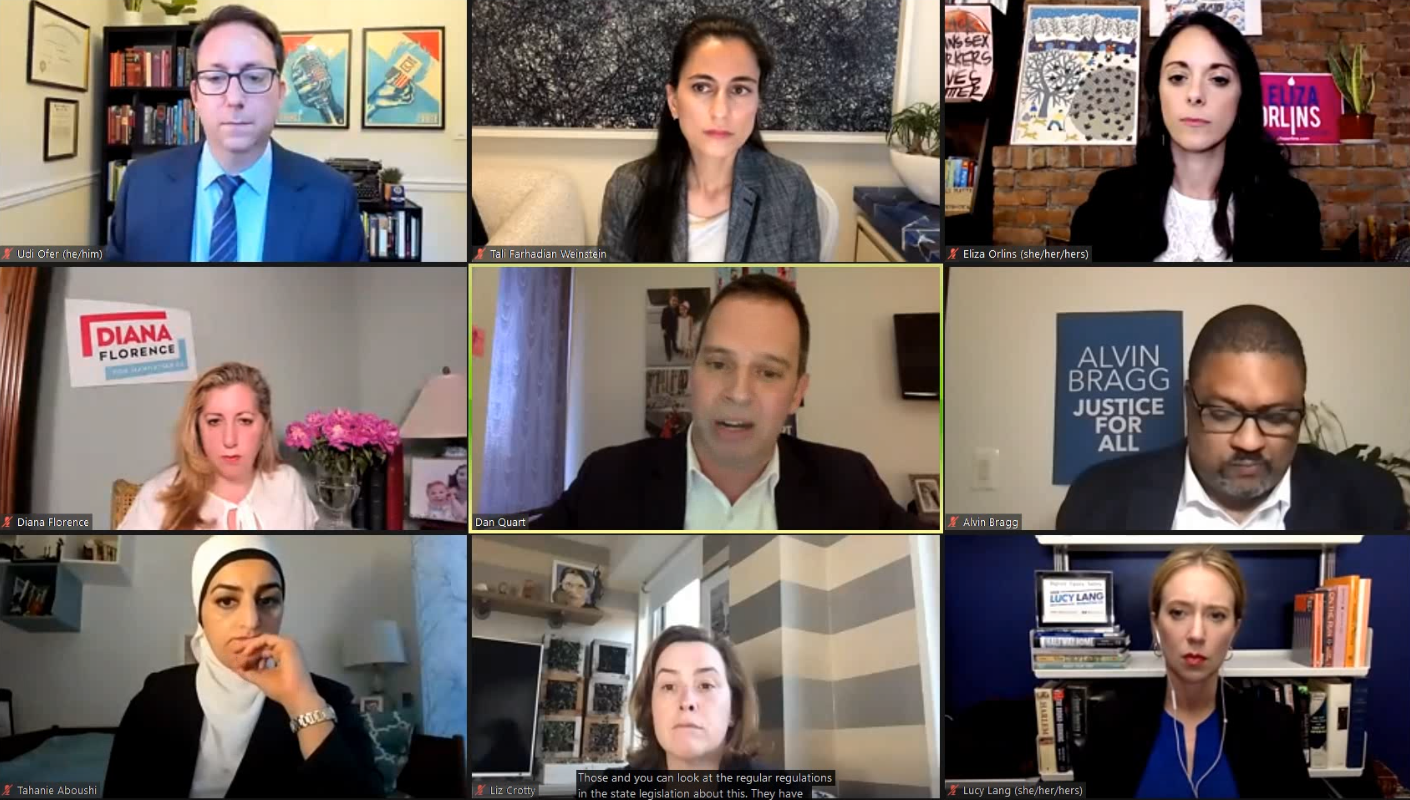 MANHATTAN, NY – With the Democratic primaries on the horizon, candidates for Manhattan District Attorney have shared their own visions for reforming the DA’s office, including reshaping and gutting current prosecutors.

Several of the candidates endorse a hefty overhaul of the Manhattan DA’s office, with both Eliza Orlins and Tahanie Aboushi pledging to cut the office budget of $145 million nearly in half.

His plans include major personnel changes, and aim to “refocus its priorities from win records to public safety and fairness” with hiring practices that “would bring in personnel consistent with that vision.”

Many current Manhattan DA prosecutors have been looking for opportunities to jump ship early.

According to a DA supervisor, veteran staffers have been eyeing an upcoming Albany bill that would “allow early retirement for public workers over the age of 55 or with 25 years of

The Manhattan DA’s office has been home to many complex and high profile legal disputes that have been ongoing with teams of prosecutors coordinating constantly. The Trump investigation that recently moved to a grand jury and drew some concern is just one.

Daniel Alonso, who worked under the presiding DA, Cyrus Vance, believes none of the current candidates are “irresponsible enough to fire members of the Trump team,” though regarding a few of their proposed reforms, “some members of the Trump prosecution team might well leave on their own.”

While the current prosecutors feel threatened by these propositions, reformers believe these to be necessary steps in fixing the system.

Keli Young, a coordinator for the nonprofit VOCAL-NY, was an author for the platform demanding the police budget be cut by 50 percent. Reform does not stop there for Young.

She believes prosecutors to be “some of the most powerful officials in our criminal legal system and the power they have has been used to devastate Black, Brown, and low-income communities.”

A majority of the documented $143.3 million budget is for personnel according to the Independent Budget Office data. The data also shows employment at historically high levels despite arrest declines. Compared to 1980 when crime was at much higher levels, “staffing is more than double what it was.”

The Deputy Director at the Institute for Innovation in Prosecution at John Jay College, Alissa Marque Heydari, believes the budget cuts to effectively result in “firing staff members, including prosecutors, without replacing them.” Marque Heydari claims this can only lead to “a whole lot of inexperienced people handling things way above their heads.”

For others like Brandon Holmes, a co-director for the Freedom Agenda currently pushing for the 50 percent DA budget cut, find the DA office overhaul long overdue, looking to “draw a clear line in the sand that we’re not going to continue to give them the resources and to have the size and scope they currently have… to over-police and over-incarcerate specific communities.”

Share:
Tags:Cyrus VanceDan QuartEliza OrlinaManhattan District AttorneyTahanie Aboushi
Previous : I Can Be Different
Next : Guest Commentary: Orange County’s Dramatic Reduction in Jail Population during the Pandemic Is a Model for the Nation