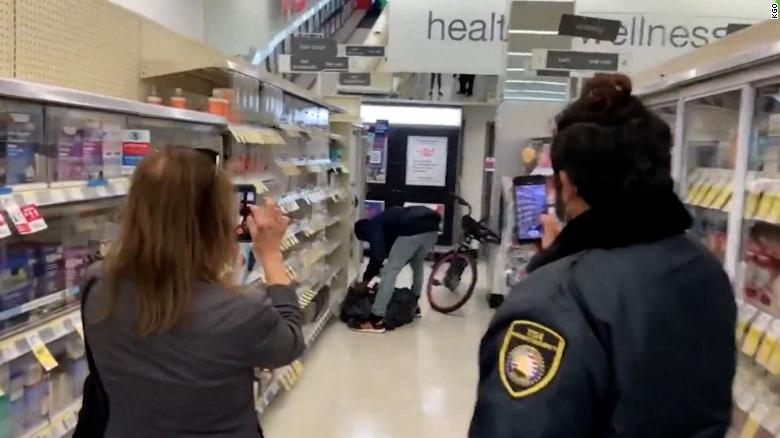 SAN FRANCISCO, CA – A viral video showing a bicylist in a San Francisco Walgreens shoplifting has become the center of attention among many San Francisco residents, but even though it’s catching many people’s attention, experts warn there’s more to the video that meets the eye.

Karl Langhorst, a senior advisor at ALTO US, a global provider of strategic support for addressing retail crime, was directly involved in helping law enforcement catch the suspect of the shoplifting in the viral video.

Langhorst is concerned with how the public doesn’t have the whole picture about the Walgreens incident, and the process of prosecuting offenders and preventing future crimes.

Retail crime is complex, and not as cut and dry as it’s made out to be, he said.

The original video shows a man stuffing a bag full of merchandise at a Walgreens before riding off on his bicycle. There was a security guard and citizen that watched the scene and recorded videos on their phones, which were later posted on Twitter by a local reporter a few minutes later.

The security guard became the subject to blame for videotaping rather than getting physically involved.

However, the guard was doing exactly what he was signed up to do: attempting to deter crime through presence and commands, said Langhorst.

When that didn’t work, the security guard observed and reported the incident to the best of his ability by recording the incident, said Langhorst, adding “nothing in a retail store is worth someone’s life, and he followed protocol.”

The security guard is to not be at blame for the incident, and because of the guard’s video, and the investigative reports from the San Francisco Police Department, the suspect was arrested a few days later, said Langhorst.

The ALTO team was very involved and helpful in the case for finding the suspect, and with the ALTO team support, the police additionally connected the suspect in the video to other incidents that occurred in San Francisco.

District Attorney Chesa Boudin’s office had evidence to prosecute the suspect with 15 different charges and they additionally requested that he be held at jail without a bail, where he remains.

Regardless of social media skewing what actually occurred and the finger pointing targeting Boudin, this case was one of the systems working as it should, said Langhorst.

Langhorst believes that without the support and dedicated training and resources provided by the retailers and collaboration between the in-store team, law enforcement and prosecutors, successfully catching shoplifters can be very challenging.

In severe cases like the one in Walgreens, crime becomes organized and ongoing theft is cyclical: repeat offenders victimize many different locations, he said, noting that even in publicized and popular areas it can be a challenge to connect the dots between the crime and the suspect.

The recent viral videos have shown offenders becoming bolder, and even becoming more violent. However, many of these cases go unreported.

Langhorst states that in some cities, the retail theft problem is due to the lack of resources among law enforcement officers where police are responding to more emergency cases than non-emergency retail crime offenses.

In some instances, retailers can even be fined if they call law enforcement too frequently about their shoplifters. When retailers can collect evidence such as the video in Walgreens that went viral and file complete, accurate, and honest reports, it can allow the slowing of the cycle of recidivism.

Langhorst said these efforts can allow the law enforcement officers to encourage the citizens to pursue community-based strategies to prevent crime, instead of law enforcement taking it all on themselves.

ALTO’s legal team has partnered with DA Boudin’s office on many cases that go as far back as November 2020.

Boudin’s office has even been receptive to having ALTO attorneys in the courtroom on behalf of members. This current strategy is new to the U.S. and ALTO attorneys provide support for employees testifying and advocating for retailers.

In cases such as the Walgreens case, ALTO believes incarceration is appropriate. However, ALTO does share Boudin’s views that minor or one-time offenders may benefit from treatment for addiction or mental health as the underlying cause for the crime.

The end goal in stopping shoplifting is to break the cycle of recidivism, by ensuring the safety of the community, and all parties appear to agree.

Langhorst commented that “meaningful and lasting crime reduction in a progressive manner, can be done…it has to be done.”