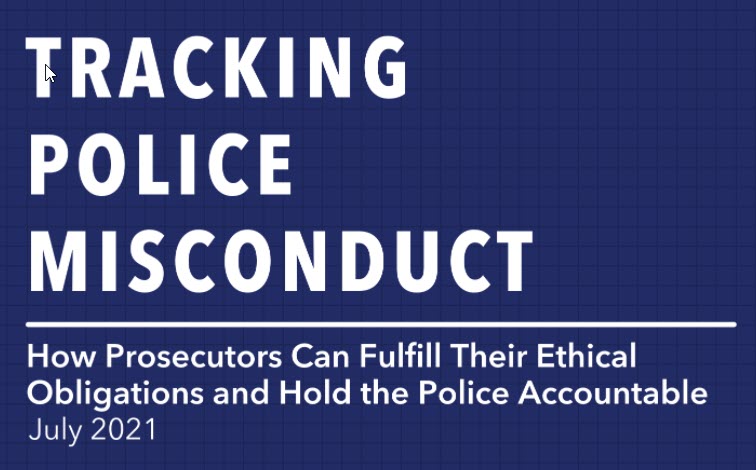 By Alexander Jimenez and Stephanie Boulos

NEW YORK, NY – In order to create a formal system to track police misconduct, the Institute for Innovation in Prosecution at John Jay College here interviewed high-ranking prosecutors across the country and created a guide that details why it is crucial to have a police disclosure list and the most important issues to consider in making one.

The executive summary, released by the IPP, lists the ways in which prosecutors can fulfill the ethical obligations that are monumental to holding police officers accountable.

The institute begins by crediting most police officers for performing their duties honorably and with integrity all across the country, but cites the murder of George Floyd and many others as a reminder that there are still officers who engage in misconduct.

As a result of this misconduct, there are prosecutors who, in order to systematically track misconduct, are independently creating lists and databases of those police offers with a history of misconduct.

Listing 11 recommendations for prosecutors to use as a guide as they create and use disclosure lists, some of their recommendations range from collecting information to making claims of

misconduct accessible to the public.

The first portion of recommendations revolves around clear training, policies, and information collection mechanisms, while the second portion revolves around training and specific community engagement.

According to the executive summary, it is recommended to “collect as much data as possible” from local police departments regarding police misconduct. Secondly, staff should be provided with clear policies and training so they are “aware of their legal obligation if they discover official misconduct in their case.”

The summary notes that a person or group of people should be designated in deciding who gets put on the list in addition to a standard of proof that must be met in order for an officer to be put on the list. “If a policy states that only material information will be included in the police disclosure list, the policy should take an expansive view of what constitutes a material disclosure.”

An appeal process should be put in place to give officers the opportunity to challenge the decision to put on the disclosure list and voice their opposition. Additionally creating two separate lists of officers should be considered, the report said.

“One that merely requires disclosure to the defense, and another that bars calling that officer as a witness in a hearing or trial, or as an affiant in a search warrant,” said IIP.

Substantial claims of police misconduct should be made more accessible to the public and, before implementing the policy, prosecutors should “engage with local police departments” to explain the purpose of the list and address any concerns that they might have, IIP maintained.

And lastly, the report said the community should be educated and made aware about the existence of the police disclosure list and given the option to make a complaint about a police officer directly to the prosecutor’s office.