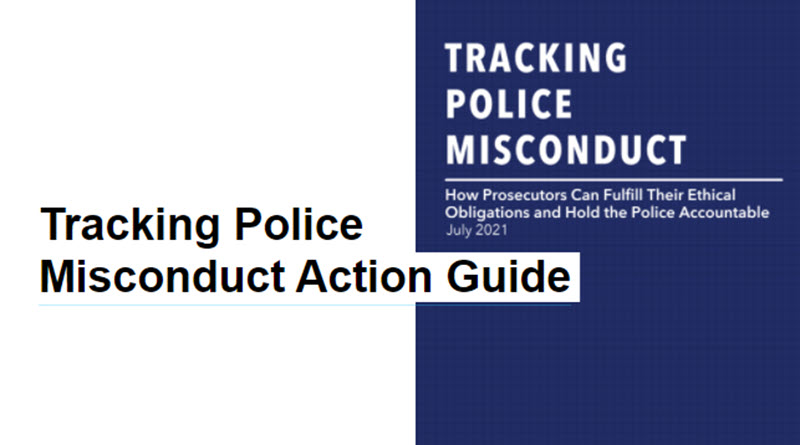 NEW YORK, NY – A panel met here this week to discuss a new action guide for tracking police misconduct produced in July by Institute for Innovation in Prosecution (IIP).

Heydari opened up the discussion by noting IIP has received many inquiries over the years from prosecutors, academics, and journalists asking about a list of police officers that some prosecutor’s offices have to track for police misconduct.

Throughout the years, IIP has learned that prosecutors don’t have a list or formal policy on how to track police misconduct.

Said Heydari, “the lack of this kind of database means that line prosecutors may not be aware of prior misconduct of officers of their cases, so they can’t accurately assess their cases, and critically they may fail to comply with their legal and ethical obligation.”

Because of these reasons, the IIP released a new action guide in July called “Tracking Police Misconduct.”

The guide was based on many interviews that the IIP did in addition to collecting written policies of these prosecutors’ offices, in the hope that prosecutors’ offices can use the guide to create their own database or improve upon the ones they may already have in place.

After introducing all of the panelists, Torrez said that when everything went remote due to the Covid-19 pandemic, the DA office was presented with the opportunity to figure out if they could build the infrastructure to start doing, and tracking police integrity and disclosures online, in a comprehensive way.

The DA office implemented a policy where on every single felony referral into the district attorney’s office, they ask the referring officer to complete a series of questions relating to findings of misconduct in their history about the preservation of evidence, use of force, even things that touch on their social media use.

DA office then disclosed the answers to those questionnaires to defense counsel in real time, the same time that they received the answers, and then followed up with an agency letter which was standard practice at the U.S. attorney’s office, but only in those instances where they had a basis for making an inquiry.

One of the most important elements that had to be done for every single case was a two-step process that involves both the officer questionnaire, and the agency letter.

It then goes to an internal panel, which is the Brady Giglio Panel held inside of Torrez’s office where they review the information, and if they decide that there is a sufficient basis to make a disclosure.

Lastly, and as Torrez mentions “most controversially,” the DA must take that information, on officers where discourse has been made, and make it publicly available. They publish the names of the officers along with a  link to the pleadings on their website.

No information in the DA’s possession is undisclosed to the public regarding this new policy.

Harold Medina was already Chief of Police when this policy was presented and noted that when he was approached by Torrez with the new policy, he liked the concept since he felt it was a good way to be transparent with the community, and everyone involved.

Medina said something he has learned in the past 18 months is that “transparency is the key to keeping communities happy with the police department, and not feelings that things are being hidden.”

After working together with the DA office to come to a point where minor concerns and disagreements were resolved, and after being able to discuss what the greater outcome would be to the police officers to get them on board with the policy, Medina and Torrez were able to agree with one another to make sure that the new policy worked well with both departments.

Ross Miller then pointed out the way that the Quattrone Center and their stakeholders pretty readily agreed that having that information accessible to the public as soon as possible would be a huge benefit.

Heydari asked Ross what forms of police misconduct he thinks prosecutors should be tracking and incorporating in their Giglio policies, of course, aside from the obvious such as dishonesty or prior criminal convictions.

He also explained that in terms of what goes to the primary stakeholders that follows the criminal case to the prosecutors and defense should be anything that involves handling of evidence that could come down to things that initially look like some kind of violation of an administrative rule or some other internal policy at the police department.

Or, he added, anything that shows something related to time card fraud, noting “again, the questions are really about admissibility and what the impact is, not so much whether it should be included.”

Heydari then went on to ask DA Torrez what his recommendation would be to those who don’t have some kind of list or database, and what work is required to create such a policy as someone who has gone through the process.

DA Torrez responded by saying, “the first thing is to set out some core principles. For me, and one of the most important things that Ross mentioned is this idea of airing on the side of disclosure, and then if you have to have a fight again about relevance and invisibility that’s fine.”

“But what are you trying to accomplish? For me, what I tried to accomplish is fundamentally a greater level of trust in the outcomes of the criminal cases that we presented in court,” Torrez said.

Jacqueline Rodriguez is entering her senior year as an English major at UCLA. Given her personal experiences as a youth in the juvenile justice system, Jacqueline grew a passion for criminal justice reform which motivated her decision to pursue a career as a criminal law attorney. She is originally from the Bay Area, but currently resides in Los Angeles, California.