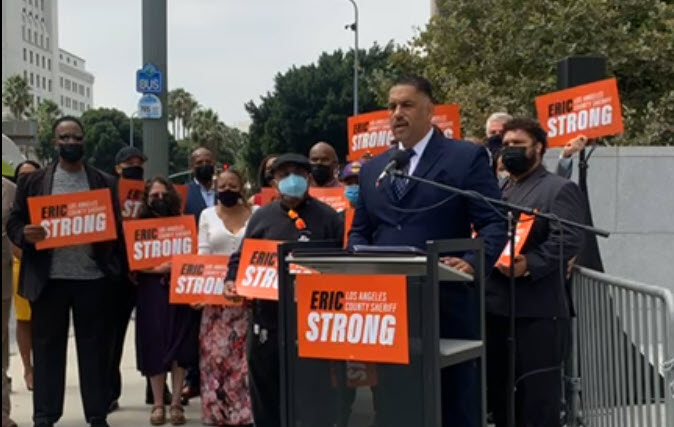 By Elizabeth Garabedian and Genesis Guzman

Strong has been in law enforcement for almost 30 years, graduating from the FBI’s National Academy at Quantico, and presently serving on the board of Police Against Racism.

“Leadership. That crisis of leadership has interfered with a course of calls for a modern and more transparent LA County Sheriff’s Department.  It has undermined our honorable profession’s ability to deliver on our promise of a more safe and a more just future for Los Angeles,” Lt. Strong said during his speech.

He noted the LA County Sheriff election of 2018 and how the winning candidate “ultimately turned his back” on those that believed he would “stand beside them.”

“This has been yet another sting for our county and the many cities within it.  Which already have a long and painful relationship with law enforcement and civil rights abuses.  This just further damages our ability and

the possibility of true reform,” he added.

Strong began his career in law enforcement as a patrol officer with the Compton Police Department in 1993, eventually working with SWAT and Metro prior to the department’s incorporation into the LA County Sheriff’s Department.

Throughout his career Strong has worked in numerous divisions of the LA County Sheriff’s Department, including patrol, investigations, internal affairs, and risk management.  And has served the city within courts, custody, and auditing.

Strong also oversaw high profile investigations within the department and helped stop attempted conspiracies in the LA County Jail that occurred concurrently with the FBI’s investigation of Anthony Brown at the men’s central jail.

Strong launched his campaign following the revelations of interdepartmental gangs in the LA Sheriff’s Department.

An article from Spectrum News 1 by Kate Cagle went in depth regarding the revelations of gangs of deputies of the LA County Sheriff’s Department.

A “Banditos” tattoo linking over a dozen deputies was revealed by the artist that inked them. He stated to have tattooed more than 40 people the exact same tattoo.

The artist revealed to Spectrum News 1 that he is “ worried about retaliation for confirming the existence of the tattoo.”

These gangs are said to be dangerous and are known to act violently against fellow deputies, along with violence within the department. Shootings in East LA have been allegedly tied to these gangs caused by people attempting to become members. Their existence also makes it more difficult for citizens to report crime.

The Bandidos gang is also rumored, according to news reports, to also be inherently racist and sexist, not permitting Black people and women to join.

Strong is leading his campaign with a promise to fight against gangs with hope to dismantle the dangerous groups growing within the department.

“As LA County Sheriff, my mission will be to enhance safety, protect victims of crime, and rid the Department of a culture that has allowed deputy gangs to fester. We can, and we will, make this a world-class department that Los Angeles can trust and be proud of,” said Strong.