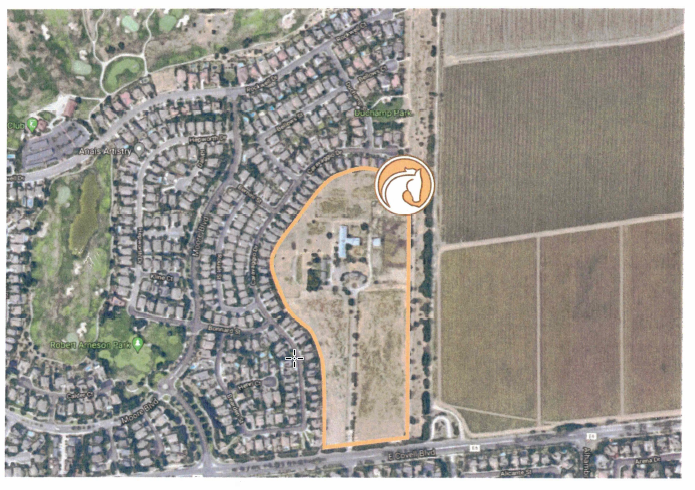 Davis, CA – It has been over a decade since the voters overwhelmingly voted down Wildhorse Ranch directly to the east of Wildhorse and north of Covell on the edge of town.  But that was a different time and now Taormino and Associates are back potentially with a new proposal for the location—Palomino Place.

The project description notes, “In Yolo County, the situation is epitomized by what we often refer to as ‘North, North Davis’ (Springlake, Woodland) in which most residents are Davis-employed persons who would likely live there if not for the lack of affordable housing. Where is the civic focus for these families when the Davis community intentionally denies housing opportunities where they work?”

On the other hand, he argues: “The Cannery homes that should have been priced for Davis buyers were overwhelmingly purchased by Bay Area buyers.”

In Davis’ case, “we invite nearly one thousand elementary and high school students to commute daily along with their parent(s) who work here. Which community are these families anchored to emotionally? Where is their ‘hometown?’”

He continues: “Without these children and the state funds accompanying them, the negative financial impacts to the school district, teachers, and Davis residents would be significant and controversial, as closing schools is not a desirable discussion for civic leaders. The City of Davis effectively exiles its employment base while DJUSD simultaneously seeks out their children to return for the District’s financial benefit via advertising on FM 90.9 NPR.

“Furthermore, Davis homeowners pay additional property taxes that benefit these commuting students who, along with their parents, have been exiled to other communities. The long-term impacts of failing to provide housing opportunities for parents and subsequently reducing the need for potential school closures has essentially been ignored by the School District and the City.”

Their proposal would “Provide new homes in Davis designed for and offered at a price that buyers employed in Davis or current Davis residents can afford.

“The shortage of new Davis homes described earlier is unquestioned,” he argues. “The most practical solutions to address housing needs are those locally generated and tailored to achieve a specific outcome.” 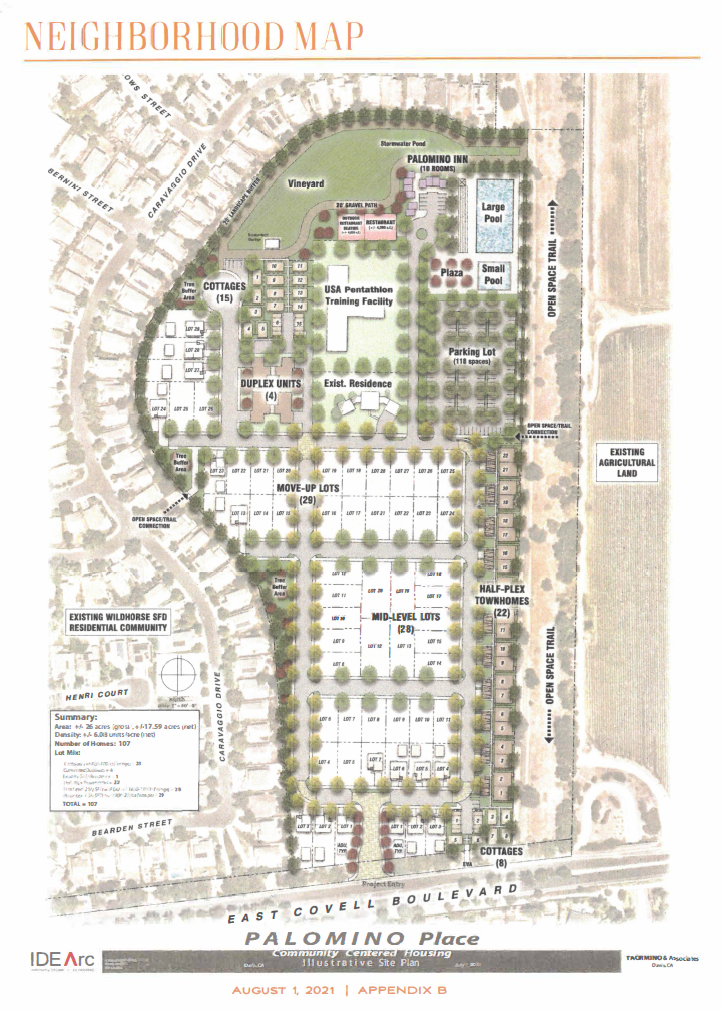 The fundamental housing principle is: “Community-Centered Housing opportunities are for those individuals (at least one in the family) who are employed in the broader Davis community or are already a resident/renter.”

The project is situated on an irregularly shaped, 26-acre remnant of a parcel.

3) 30% of units: Second move-up home; typically occurring because of increased income and/or needs resulting from an expanding family; 1,900-2,200 sq. ft.

Moreover, “All mid-level and second move-up lots are intended to provide Accessory Dwelling Units (ADU) approximately 650-800 sq. ft. as a standard offering of the builder.

“Within each category of proposed Palomino Place homes are imaginative opportunities to assist purchasers and the City in achieving their housing goals beyond a typical land purchase. The size of the home is consciously formulated to meet the buyer’s financial capabilities with the cost to construct and ultimate sales price,” they explain.

Here is what they propose:

Mimic the Aggie Village model: This is where UCD, as independent investors, purchased the finished home then “land leases” the lot to its faculty and staff who own the home itself—a concept first created in California by the Irvine Company in Southern California.

Equity sharing: Down payment assistance to buyers from either a Private Equity company (common in Silicon Valley), the newly proposed City of Davis Housing Trust Fund, or a local public/private employer participation.

Repurchase rights: To ensure long-term availability for local employees receiving an employer subsidy, the employer requires a “first right to purchase” in the event of its resale for some period before the residence goes on the open market.

Restricting long-term rentals: No retention by the purchaser of the property after vacating for use as a rental home. This restriction helps with maintaining inventory for future Davis employees and residents.

Continued owner-occupancy: Required by the purchaser, except for specific reasons and time frames—for example, a UCD professor goes on sabbatical, a major housing recession, etc. The home must be sold to an owner occupant.

This would be a Measure J vote.  Their goal is November 2022.

13 thoughts on “Wildhorse Ranch Project Could Return As Palomino Place”