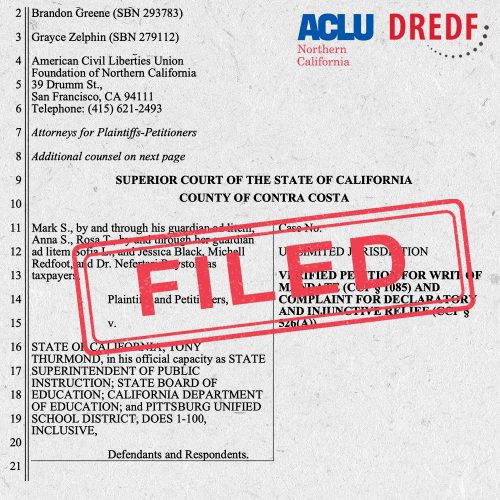 San Francisco – The State of California and Pittsburg Unified School District have maintained a separate, unequal, and illegal educational system where Black students, children of color with disabilities and English learners have been segregated in substandard learning environments, excluded from classrooms altogether through the use of unwarranted suspensions and expulsions, and, as a result, denied their constitutional right to a public education.

On Monday, two students, two parents of former students, and a current teacher, filed a claim in Contra Costa County Superior Court, against the State Board of Education, State Superintendent of Public Instruction Tony Thurmond, the State of California, and Pittsburg Unified School District. The complaint alleges the state and district’s unlawful practices harm thousands of its most marginalized students, primarily children of color.

“Pittsburg Unified has one of the worst records in the state when it comes to fulfilling its legal obligation to provide supportive services for disabled students and English learners that allow them to thrive in general education classrooms, including learning how to read and write,” said Malhar Shah, a staff attorney with the Disability Rights Education and Defense Fund. “We are calling for systemic reform to address pervasive discrimination against children whose constitutional rights to a basic education are being violated.”

More than 11,000 students attend district schools, and most of them are children of color.

having disabilities, then pushed into segregated classrooms where no worthwhile instruction occurs.

Plaintiff Mark S. is a 7-year-old Latino student who qualifies for special education because he has autism. His teachers spent his class time showing him Disney movies with no educational value and having him do arts and crafts.  He is now in third grade, but still reading and writing beneath kindergarten level.

Although the district was put on notice years ago about the deficiencies in its special education programs by its own consultant, school officials have failed to follow any of the recommendations in any meaningful way.

Plaintiff Jessica Black is a Pittsburg resident whose daughter attended district schools. When Ms. Black’s daughter was 11 years old, she was forcibly strapped to a gurney and transported to a psychiatric hospital. Black said school staff called the police after her daughter walked out of her classroom in frustration.

“I don’t want any other student to have to endure the racist and unfair treatment that my daughter went through,” Black said.

The complaint further seeks to hold state education officials accountable for allowing these many long-standing violations to go unchecked.

“State officials have allowed Pittsburg Unified to segregate Black students and English Learners with disabilities into inferior classrooms and to engage in other exclusionary practices, such as overly punitive discipline,” said Ana Mendoza, a staff attorney with the ACLU Foundation of Southern California.  “In so doing, they have failed in their constitutional obligation to provide access to equal educational opportunity to public school students.”