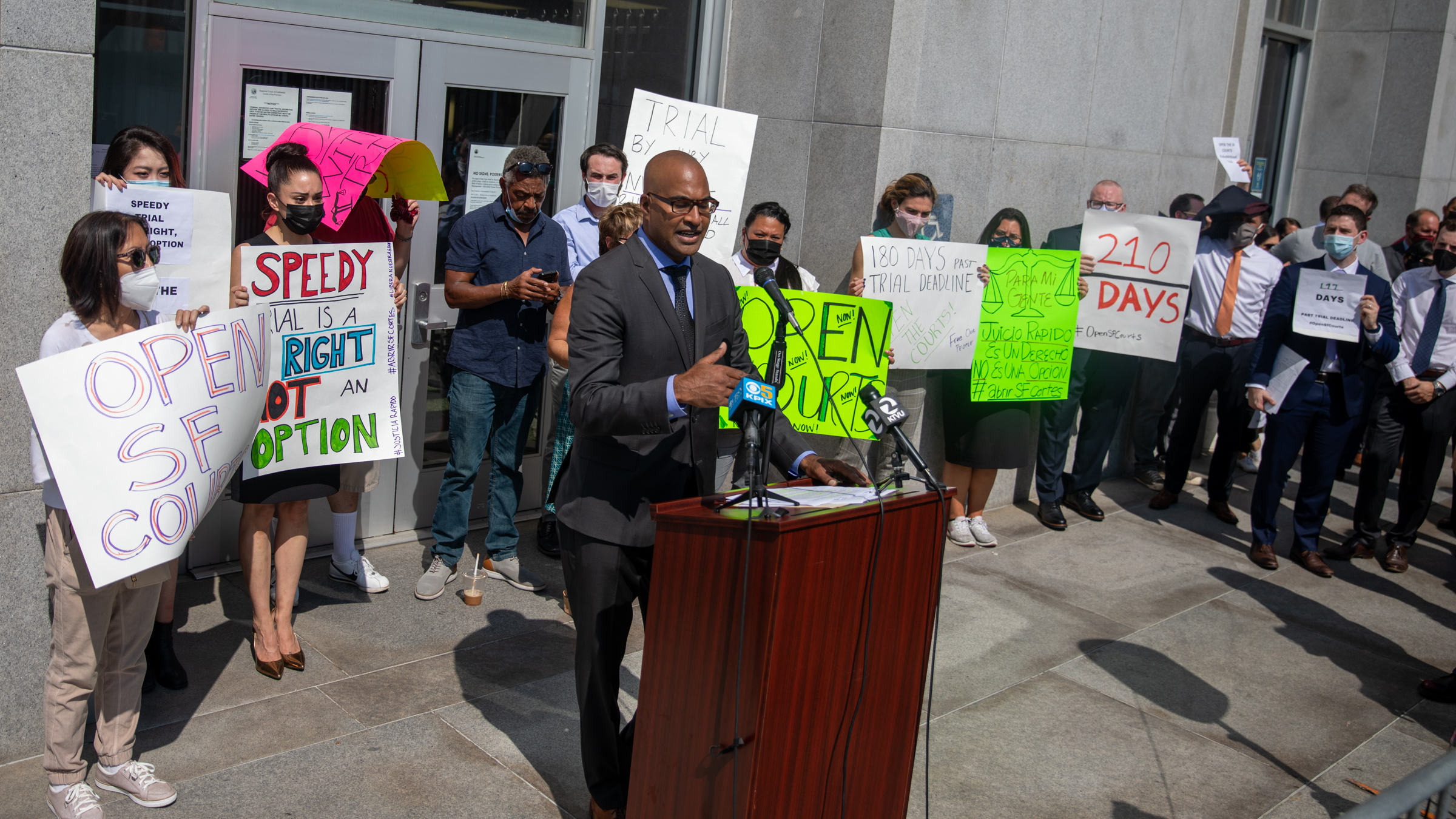 San Francisco, CA – While San Francisco has guarded well against COVID outbreaks in its jails, that layer of protection has at times come at a cost, a cost that was brought up yesterday by protests from public defenders and their clients about the lack of access to court hearings.

Dozens of people gathered outside of the Hall of Justice on Tuesday, along with San Francisco Public Defender Mano Raju, several members of his office, activists and other community members who chanted and held signs saying “Open the courts,” “Speedy Trial is a Right, Not an Option,” “We Demand Trials Now,” and signs that noted the number of days that people had been waiting for trial past their legal deadline—some as many as

“The court is supposed to enforce the law, not break it. Public Defenders will not stand by while members of our community are denied their right to a speedy trial, locked up for a year, while the Court takes care of non-urgent civil cases, including a trial to evict people out of their homes. We demand that the San Francisco Superior Court do its job, and not put poor, Black and Brown people last in line. The law applies to everyone, including the Court,” said Public Defender Mano Raju.

Raju is among five plaintiffs who filed a civil lawsuit last week against the San Francisco Court for violation of speedy trial rights.

To illustrate the problem, Mano Raju noted that someone they represent had a court hearing last week, and he came to court thinking that this is the last day that he can be in a hearing before being sent out to a trial court.

Raju spoke of the case of Kalief Browder, the young man who was arrested and held at Riker’s Island in New York without trial from 2010 to 2013 for allegedly stealing a backpack.

“Eventually when he was sent out to a trial court, and only then, the district attorney dismissed the case because they didn’t have the evidence to prove the case,” Raju said.  “As a result of being locked up for that long, however, young Kalief Browder was never the same.  He ended up taking his life.

“He wasn’t killed on the streets, but he was murdered by the system,” he said.  “We should never forget that lesson of life.”

Raju said he believes that they have the same story going on right now in San Francisco multiplied by over 100.

“We’re not going to stand by while members of our community, poor Black and brown brothers and sisters, are told to wait in the back of the line while the court takes care of civil matters,” he said, noting the anxiety and the impact that that incarceration has on their clients and the communities they represent.

Mano Raju also pointed out the disparate impact this has, as the population of San Francisco is 5.6 percent Black yet over half those in custody are Black.

“Our law guarantees Californians the right to a speedy trial within 60 days. It is a humanitarian crisis that we have over 100 people waiting in jail for months, some over a year, often in their cells for 23 hours a day; this kind of isolation and deprivation can cause irreversible long-term psychological damage to individuals and their families and their children,” he said.  “It’s also a humanitarian crisis to have hundreds of others outside the jail, but still subject to the court’s orders while presumptively innocent.”

He pointed out, “We are in the most progressive city in the United States and we have our version of Guantanamo Bay right around the corner.  This is absurd.

“You have people, our own brothers and sisters, citizens of this country who are presumed innocent, being held captive like dogs,” Davis said.  “I hear all the cries and pain for my clients.  And what they tell me is that this is torture.”

He said, “They are being held in a dirty smelly cell, 23 hours out of the day, no ventilation, no place to move, and if they’re lucky they get one hour out of that cell.”

He added, “(They) are not getting any counseling, no access to library books.  They aren’t even allowed to go outside.  They have to take Vitamin D pills because they’re getting no sunshine.  This is modern-day torture.”

And, like others, he pointed out that this is occurring at a time when the city is re-opened, people can go to movies, restaurants and get their hair cut.

Other San Francisco institutions, including government agencies, hospitals and businesses, as well as superior courts in other counties, have risen to the challenge of safely providing essential public services.

The lawsuit urges that the pandemic cannot be a permanent excuse for bureaucratic disregard by the courts for people’s human and legal rights.

Jade Ariano of the Western Advocacy Project pointed out that the San Francisco courts have prioritized non-urgent civil cases like evictions.

“The only logic that can explain this is a carceral one rooted in racism and classism,” she said.  “The fact that over half of the people sitting in jail are Black.  When only 5% of the overall population of San Francisco is Black, it is not a coincidence. The pandemic is a power grab for the police state. And the private (sector) profits here in the city, like the business improvement districts and big tech whose common goal is to make the city more amenable to wealthy white people. 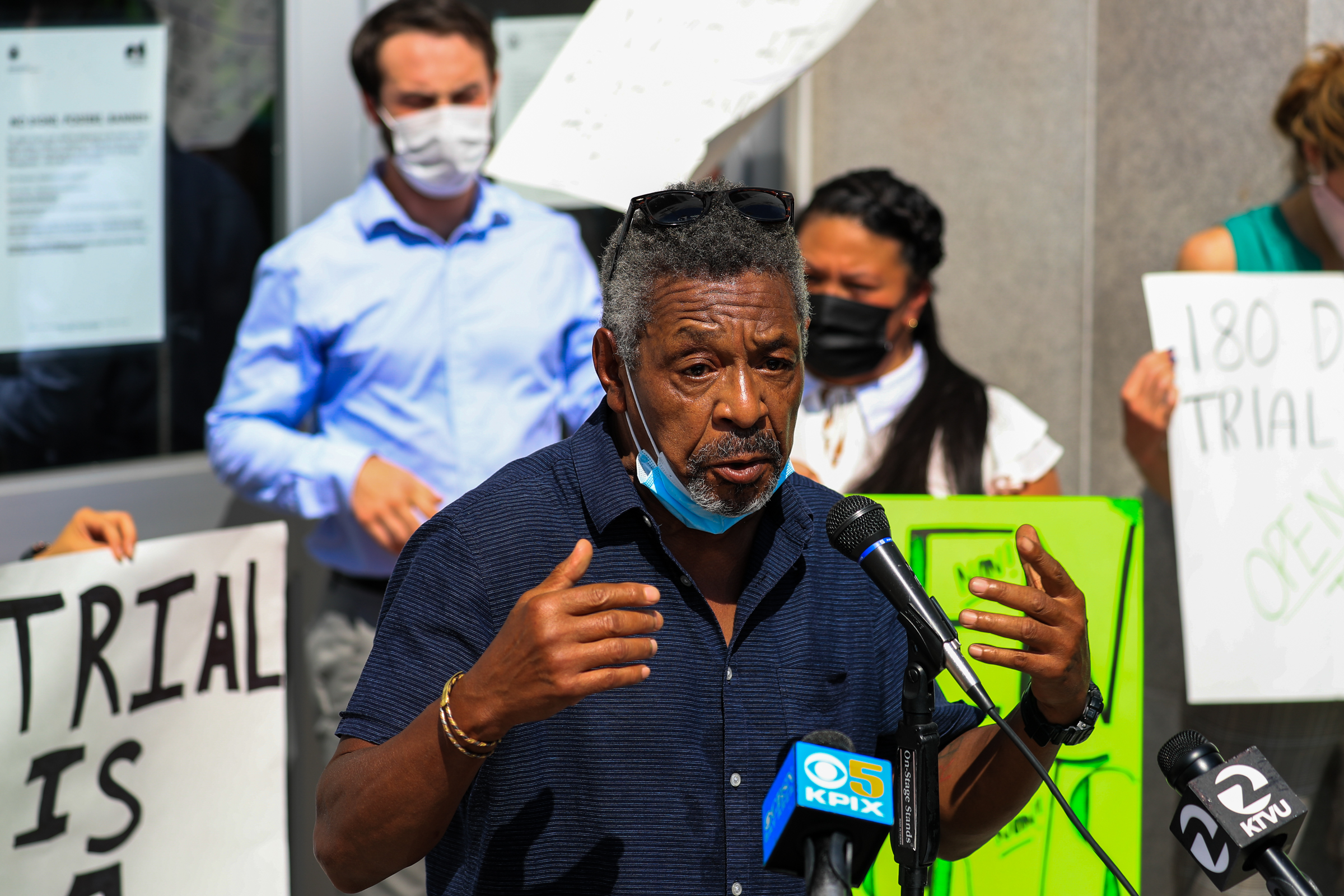 Another speaker noted that this is a humanitarian crisis, “but this is nothing new.”  He said, “People who looked like me and brown people have been in the humanitarian crisis since the 16th century when (there was) imperialism and settler colonialism.

Everyone at the rally agreed that the court’s disregard for basic human and legal rights has created a humanitarian crisis. The lawsuit seeks to end the court’s now-routine practice of continuing criminal cases for months past the trial deadline, while it holds jury trials in a variety of non-urgent civil cases for money damages.  It demands a ruling requiring the court to eliminate the backlog of criminal cases through all means necessary. 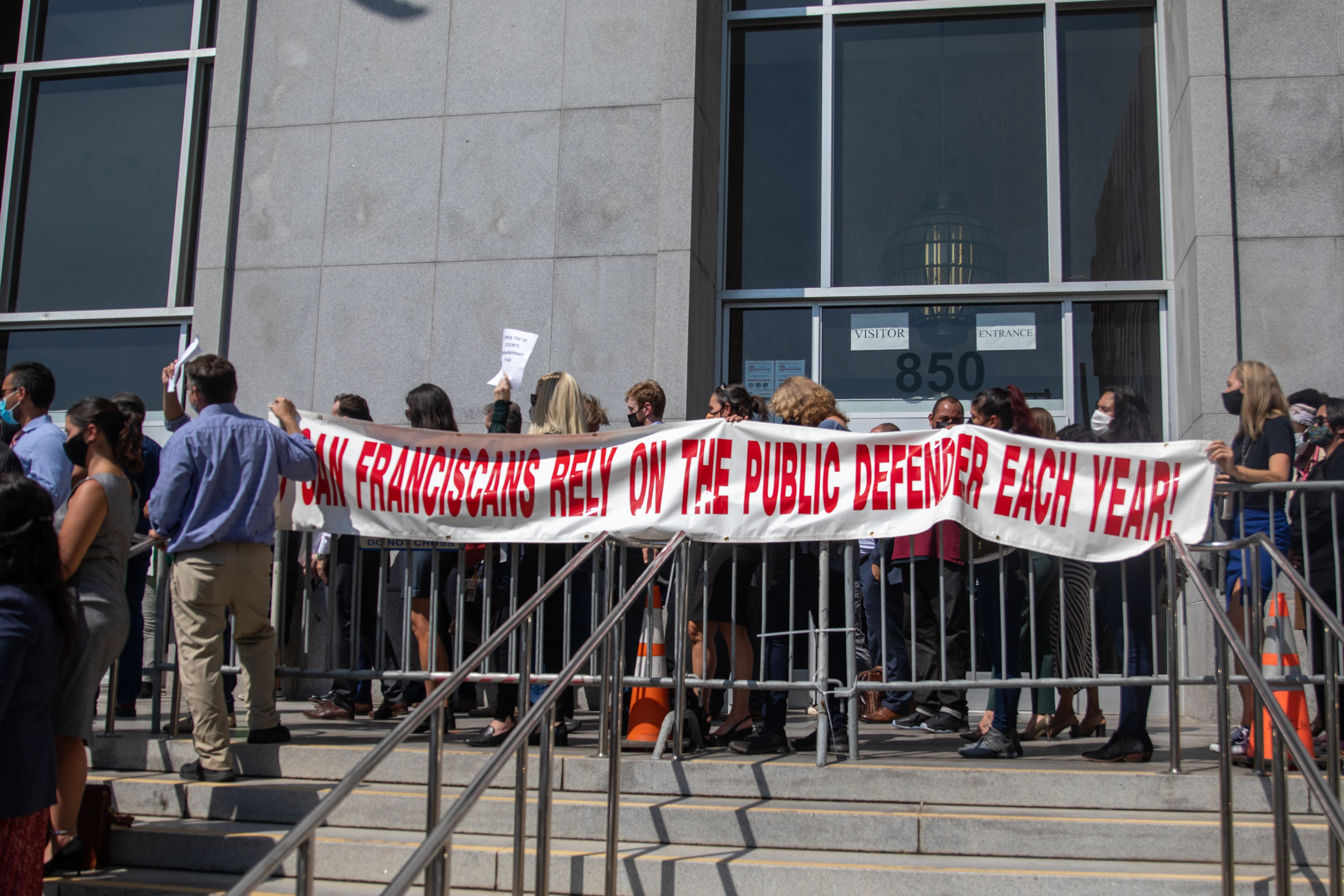 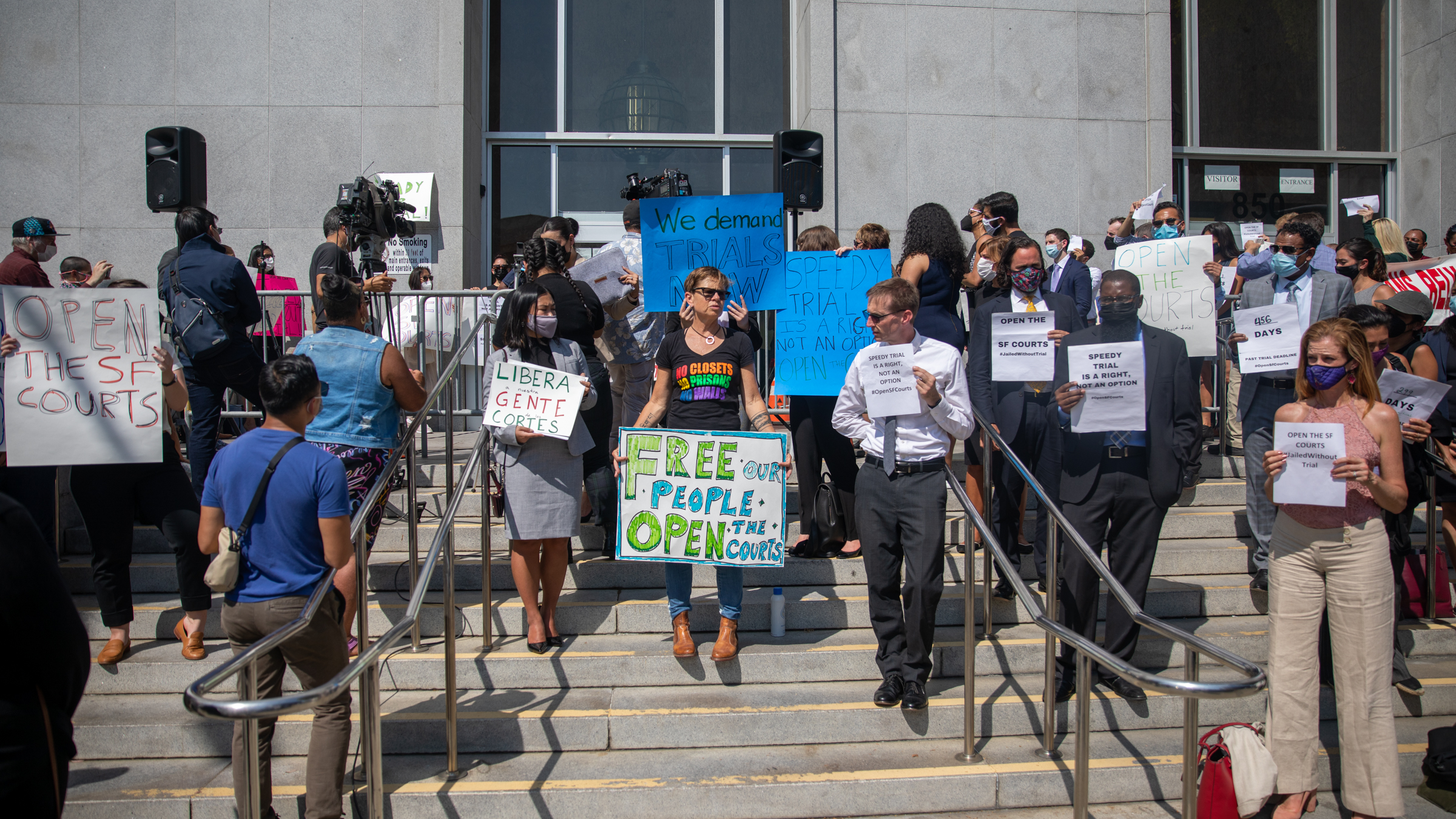 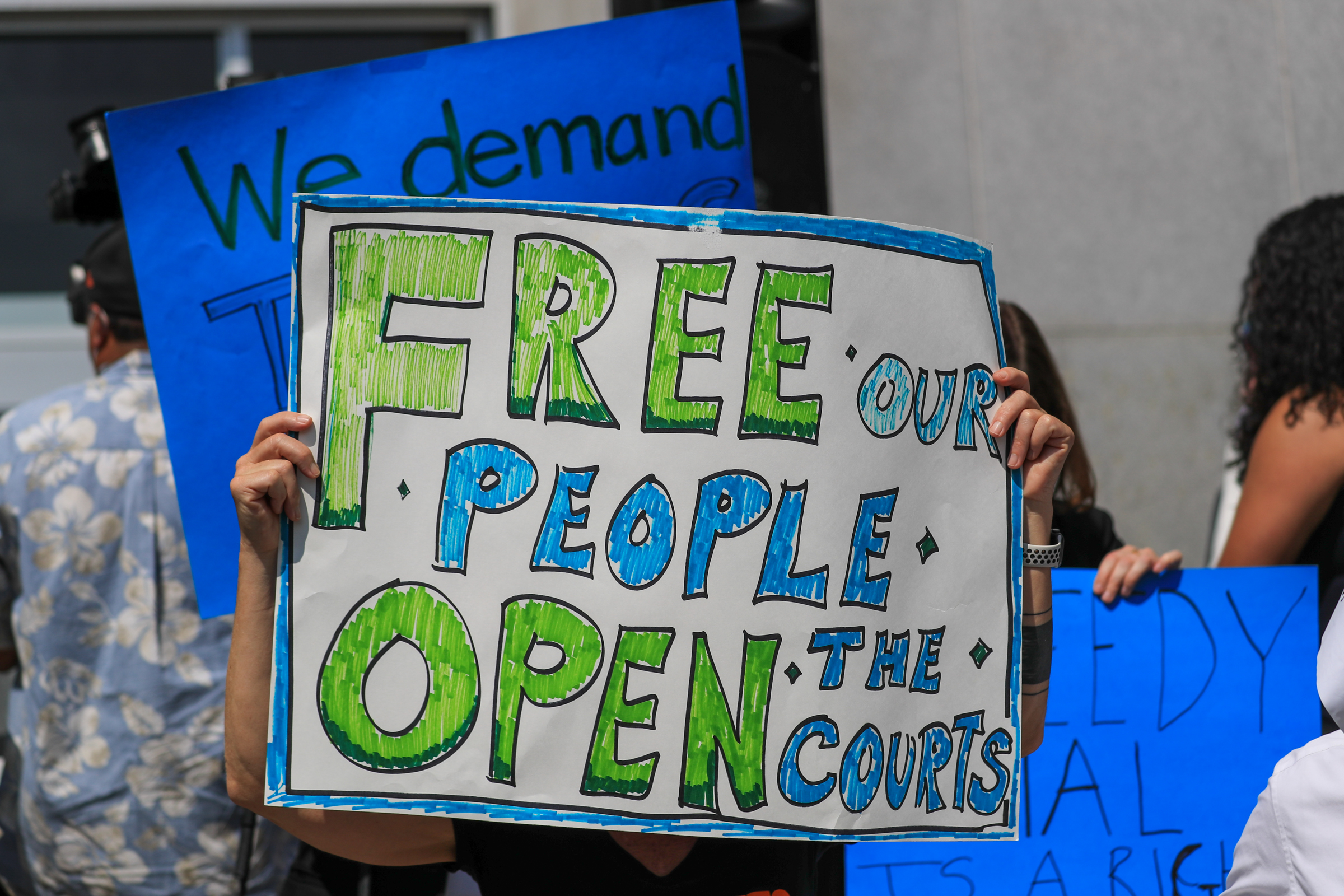 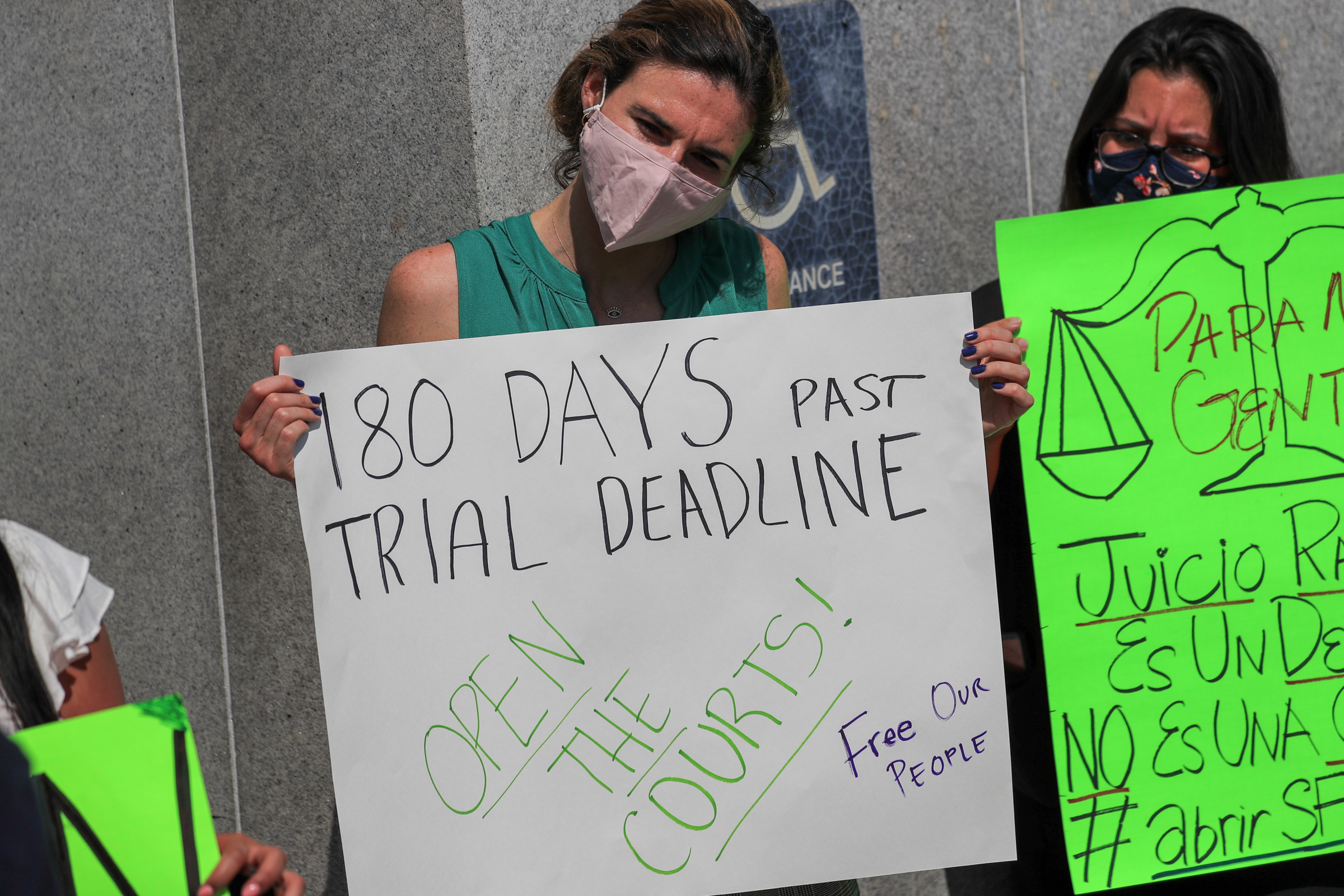 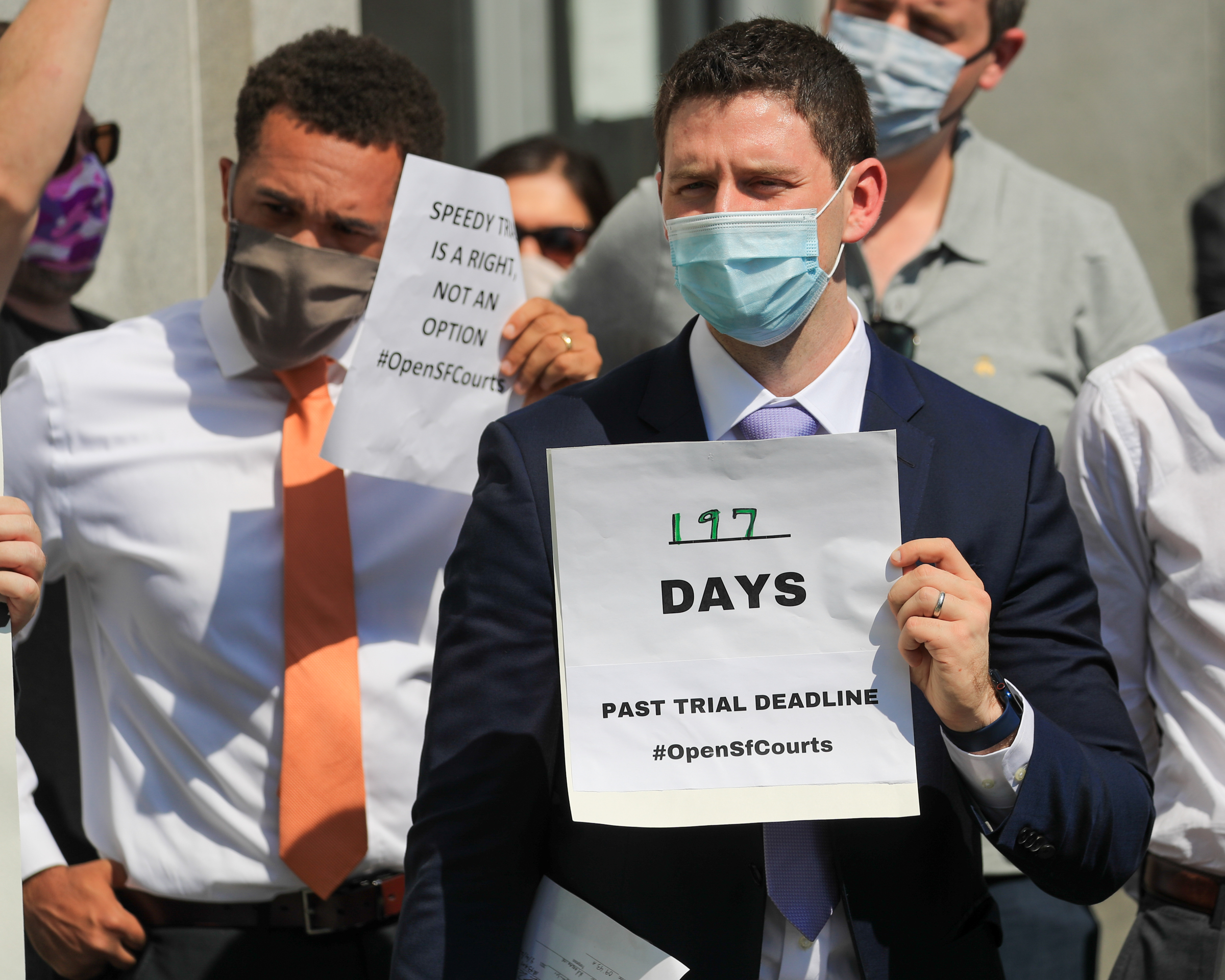 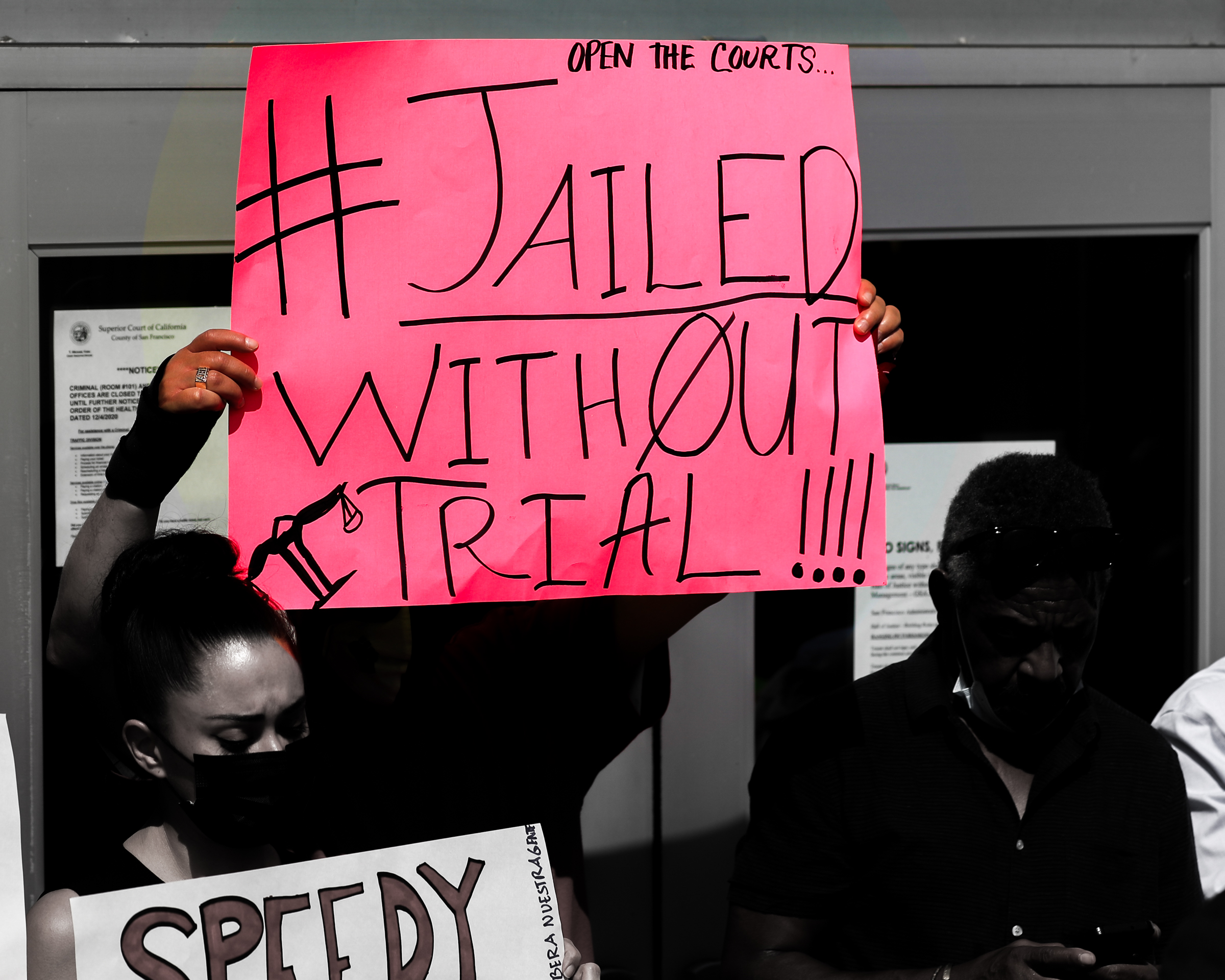 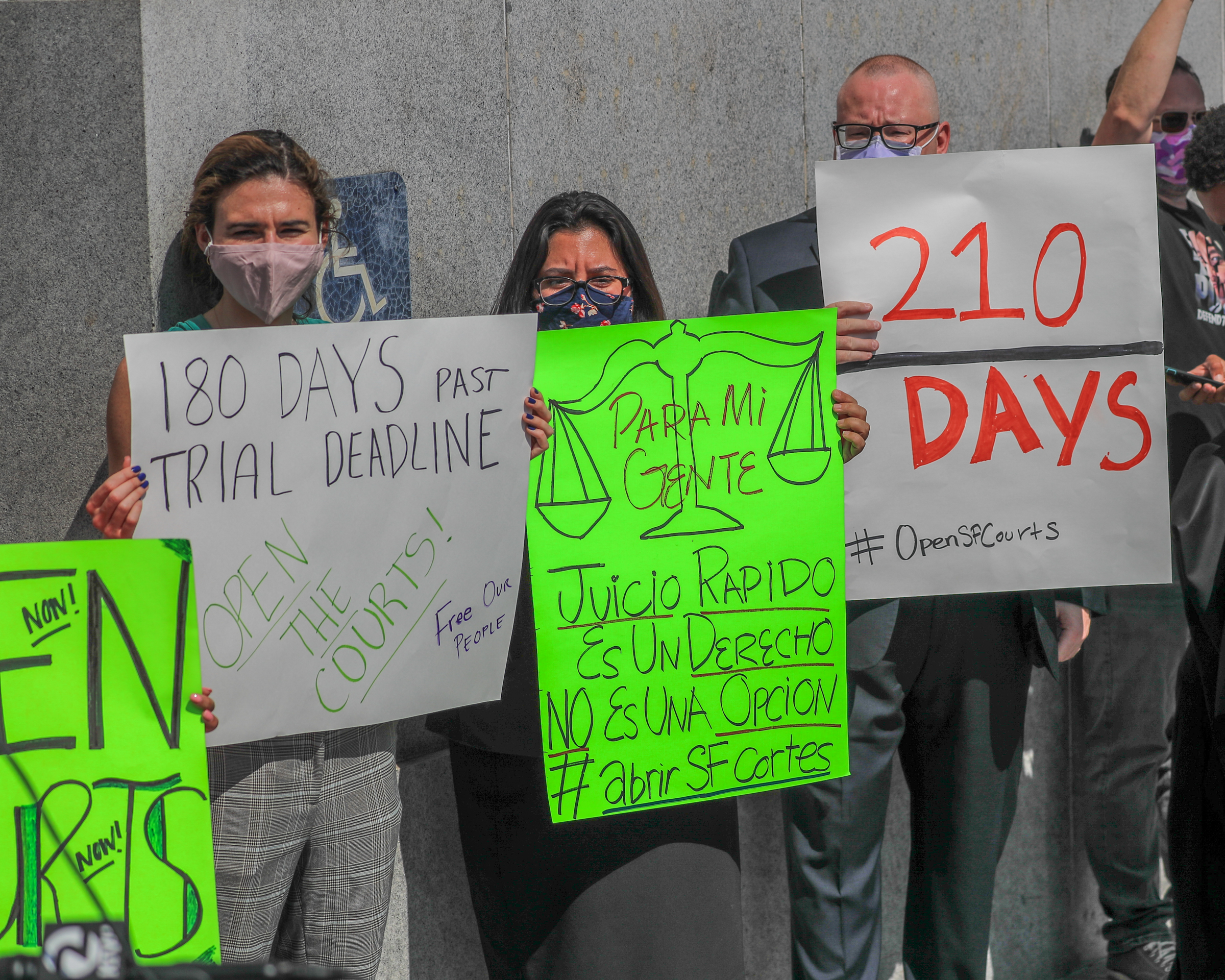 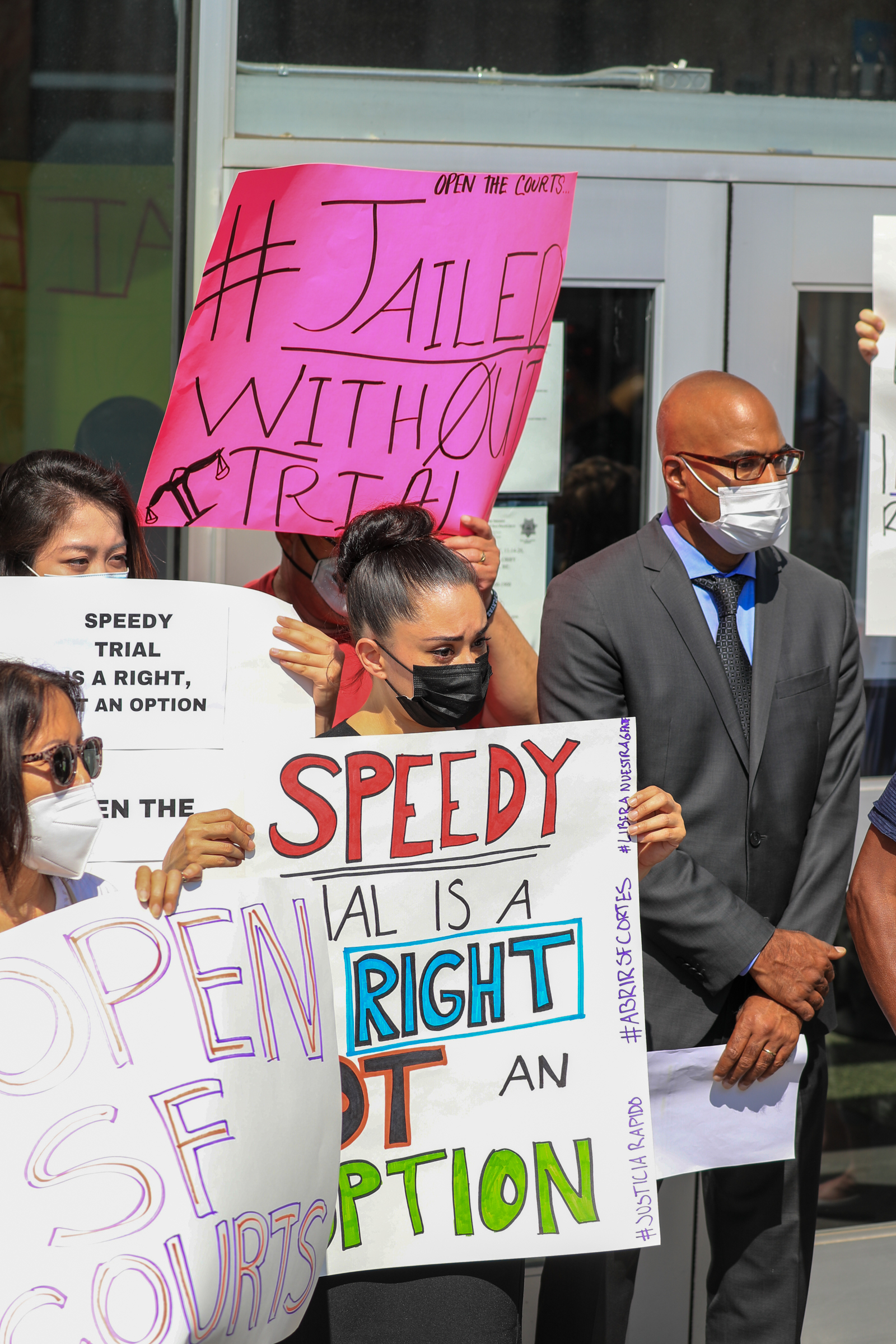 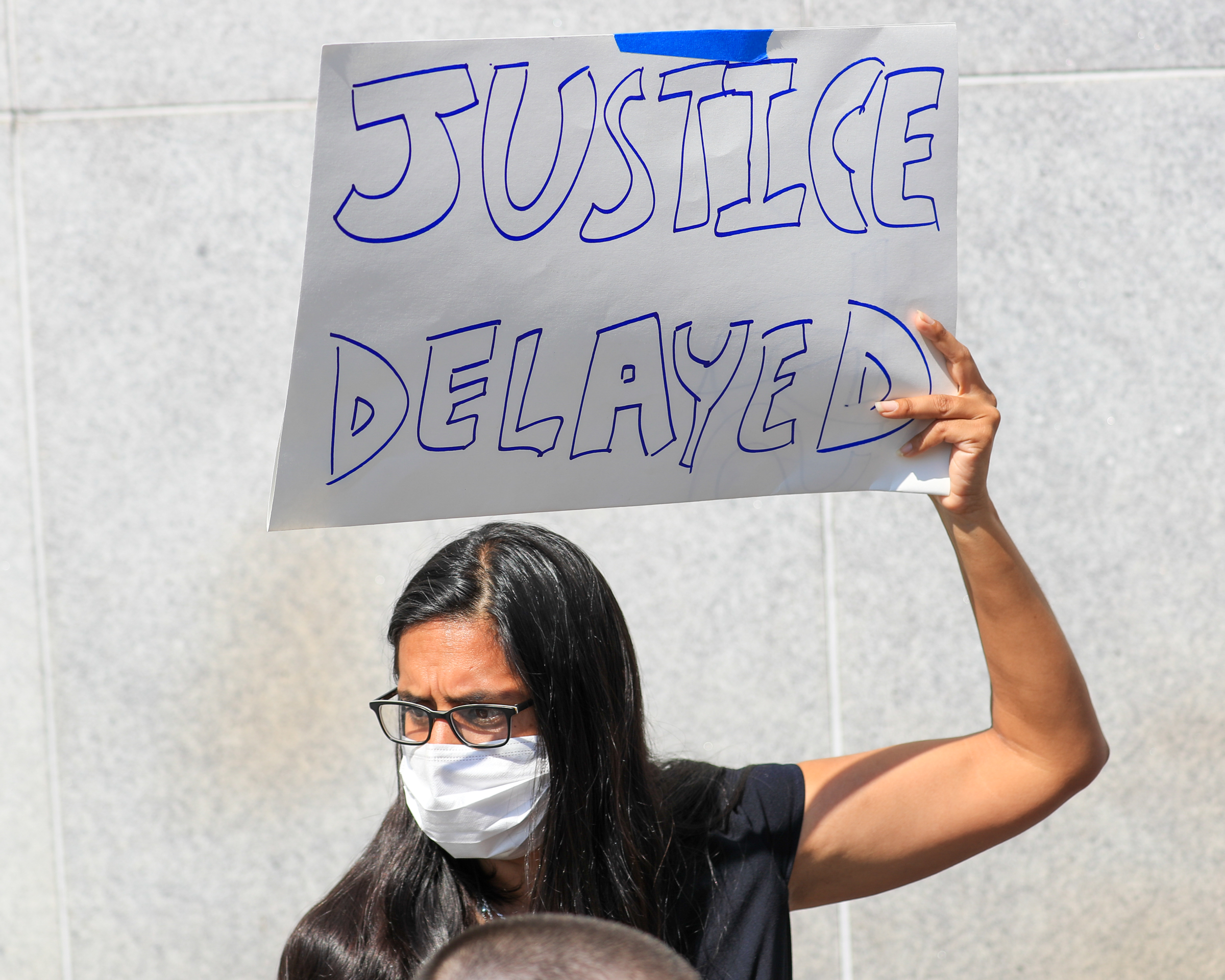 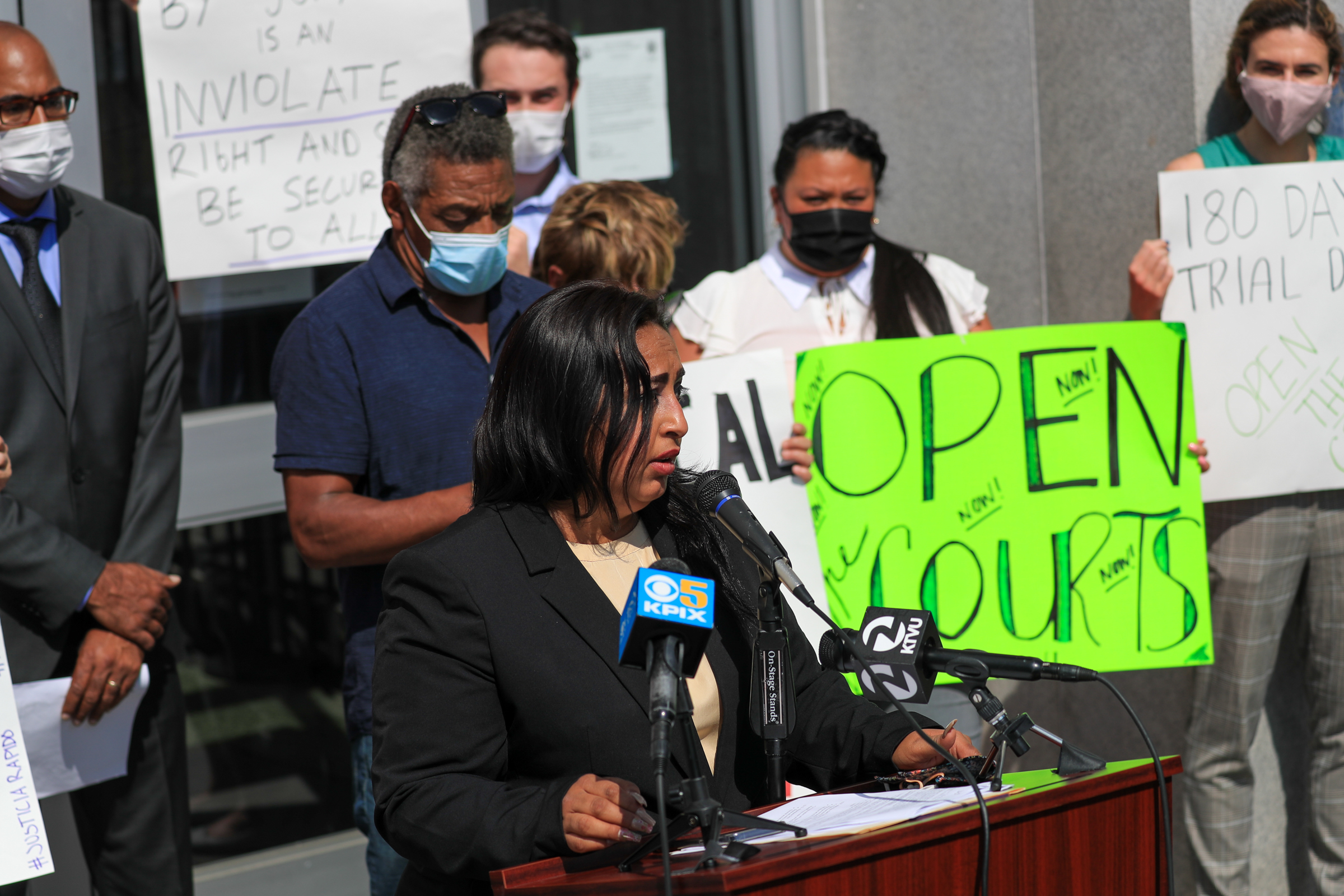