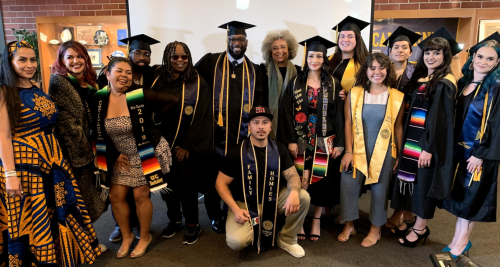 ALAMEDA, CA—The Berkeley Underground Scholars (BUS) organization at UC Berkeley bridges the gap between prison and higher education, giving those incarcerated, formerly and presently, and system-impacted individuals, a second chance, or even a first chance, at education.

The Underground Scholars Initiative’s (USI) rich history began in the spring of 2013 by UC Berkeley’s own formerly incarcerated and system-impacted students. It was made in hopes of creating a welcoming space where individuals could get the academic and mental health support they need, by means of retention, advocacy, equity, and community inclusion.

In 2014, the student-led organization received funding through UC Berkeley’s fee referendum, where the Associated Students of the University of California (ASUC) and all registered Cal students approved the motion to fund the organization.

Just two years later, in 2016, the organization further pushed its goal by partnering with former California State Senator Loni Hancock to secure funding from the state of California to develop a state-wide academic support program. In doing so, Berkeley Underground Scholars flourished.

The organization provides one-on-one support to currently and formerly incarcerated students who would like to transfer to UC Berkeley. By offering holistic and supportive services, the program assists current and prospective students with navigating the university.

Once admitted to Cal, BUS provides tutoring services, financial aid advising, and powerful opportunities for leadership development and research. In every step of the program’s community work and support, they advocate the necessity of improving the “prison-to-university pipeline.” At all points of the application, enrollment, and graduation process BUS advocates and supports incarcerated and system impacted individuals to achieve education, employment, and community.

In a sample conducted by the New America Analysis on the US Department of Education and the National Prisoner Statistics Program, about 69% of incarcerated adults wanted to enroll in a college program; however, only few got a chance to or followed through with it. What the Underground Scholars Initiative is hoping to do is address mass incarceration through education by helping one student at a time turn their life around with education through exhausting the many resources and opportunities available to them.

Starting from humble beginnings, USI and BUS have been able to touch and help hundreds of individuals.

One of these individuals is Dustin Wallace, a formerly incarcerated and current Cal student studying data science. While serving time for a drug-related offense, he became close to a finance teacher who taught him about financial trading and economics, inspiring him to go to college. After leaving prison and attending community college, he found himself feeling alone at UC Berkeley.

“The Underground Scholars Initiative we have here [gave] me a good sense of community. Students from our communities often have to deal with issues that an average student would never even imagine, so it’s important that we have a space of our own with people that understand these potential issues and how they affect the navigation of higher education,” Dustin stated.

They were able to provide him with resources and support to make his reentry as smooth as possible as reentry itself can be incredibly difficult. Feeling more grounded, Dustin is enjoying his classes and remains passionate about finance and data science.

For many of those who are or have been incarcerated or have been negatively impacted by the system, education has come to represent an escape from the brute reality of the world and of their past. It also serves as an opportunity to have a second chance to better their own life.